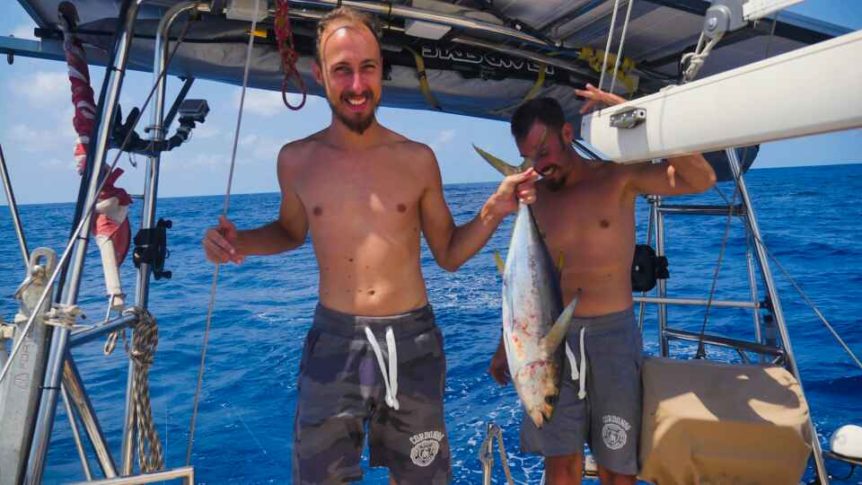 0800- Awake groggily for watch. Sometime overnight the wind has died and we are back to motoring along. This means lots of power and the ice machine is on. Decide to treat myself to an iced coffee while I read during my watch. The sun is shining and the ocean is calm. No wind. 1000- The wind comes up enough to sail, although of course it’s coming from the exact direction we want to go. Still, sailing in the wrong direction is better than motoring so we tack off in a SE direction, although we really want to go SW. Karin takes over watch and I pass some more time reading and writing this log.

1400- Fish on! Fish on! We throw the line to Uli and tell him to pull like a mad man. It’s his first fish ever I think and he really doesn’t know what do to. Eventually he gets it up on the back step and it’s a beautiful tuna! Somehow Uli doesn’t put the fishing gloves on and cuts his finger on the steel leader. Not too bad though. Next time he won’t forget. I think it’s a big eye but will have to check the book. The 2nd hand line is also tight which I quickly pull in. It’s a much smaller tuna so we unhook it and throw it back. It’s my cooking day so I think I’ll make sushi for dinner tonight!

1400-1700- The sea state has calmed down and it’s pretty smooth sailing. We’re still making good speed and our course has improved as well. I’m able to spend a few hours on the computer editing. The fish alarm goes off again. This time it’s a barracuda. What in the hell is a barracuda doing all the way out here? I don’t think there are any reefs around. Anyway we have plenty of tuna so it’s his lucky day. We throw him back.

1800- Sushi time! I spend some time in the galley slicing the beautiful light red meat of the tuna, slice up one of our last cucumbers left, and make some Wasabi. It’s roll your own sushi night. Neither Jens nor Uli have ever had this experience but they catch on quickly. We feast on simple tuna rolls with rice, cucumber, and pickled ginger. The wasabi is BLASTING! It’s the freshest sushi possible and absolutely melts in your mouth. What a very cool experience to do this outside as the sun sets and Delos sails on. Just fantastic!

2000- I clean up from dinner and finish up my watch. The wind is still decent and even tending a bit Westerly which helps our course. I download a new weather forecast using Predict Wind and the Iridium and it shows by early morning the wind disappearing. I think we will be motoring for too long. We are just about 280 miles from Bassas Da India. Hopefully the weather window holds! Good night!