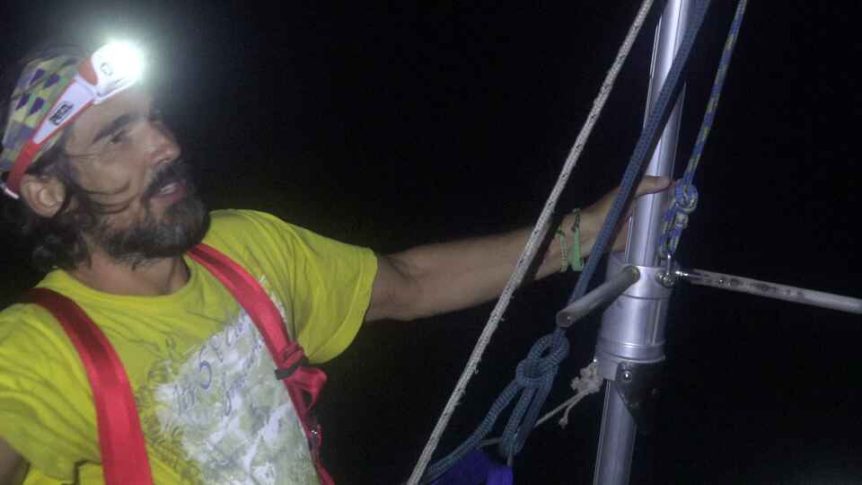 10:00- Took advantage of no morning watch and slept in a bit. Woke to the sound of the motor droning on and on. The rhythm can sometimes be very comforting as it chugs away. Started doing a bit of morning reading.

11:00-15:00 Not a lot going on today. The wind comes and goes. Tried to sail for about two hours but then the wind died completely, making less than .8 knots. Started motoring and the wind came back, but from a different direction. Now we are headed directly towards shallow spots on the chart. Soon we will need to either tack or motor sail to clear them. 360 miles to go until Bassas Da India. If the weather holds we may get to do some diving!

15:00- Karin on watch. Hand over the helm. We have two big hits on the fising lines in the afteroon. We pull them up only to find the leaders bit clean through! Must be something savage down there… We switch to our steel leader and now it’s game one!

16:00- Steel leader also destroyed. What the hell is down there?

17:00- Karin and I watch Harry Potter relaxing. The wind has returned and we’re tacking our way among the reefs, course due south.

19:30- Must have dozed off for a while. Wake up to a loud flapping and Brady yells from the cockpit. The genoa is luffing uncontrollably. I run into the cockpit and Brady is shining a light on the genoa. It has slid half way down the furler. What the hell is going on? Drill time- we don harnesses and lights and run onto the foredeck. The forestay is okay, all rigging is okay and the halyard is still cleated off in its fully up position. The head of the sail must have ripped, or the line tying the head to the furler must have chafed through. First we must get the sail down so we backwind the genoa and pull it down by hand. It goes smooth and we find the sail to be in good condition, the head is still fine. It must be the attaching line. We dig out the bosun’s chair and I resign to going up to the top of the rig at night. We set up the blocks and halyards and Karin points the boat directly into the swell to minimize roll. Jens hoists while Brady and Uli are on the foredeck. I tie myself to the forestay and get slowly lifted. Even though the seas aren’t really that bad the higher I go the more the motion gets magnified. By the time I’m halfway up I’m being slammed around pretty bad and it takes all my strength to avoid being bashed against the furler. I’m twisting and turning as Delos moves with the sea. Eventually I make it to the top of the rig and find sure enough that the line tying the head of the sail to the furler has chafed through. I tie the furling collar and halyard to my harness and start getting lowering down. It’s even more difficult to go down than up as the furler keeps on getting bound up, jerking me to a stop at points and causing me to slam into the stay face first. I take some pretty big blows but eventually make it down to the deck. Success! We re-tie the genoa up and head dead upwind for a hoist. At least the breeze is only about 15 knots otherwise none of this would have been possible. Within 90 minutes we are back underway tacking along the coast. Afterwards I wondered what would happen if you were a single hander? Would you go up the rig at night by yourself? I would have to seriously think about this. It would even be tough for a typical cruising couple in this situation. A good reason to have extra help onboard for longer passage I think.

21:00- Eat some dinner that has now gone cold during the genoa incident and turn in for 30 minutes of rest before watch starts.

22:00- Watch starts and resume tacking along the coast. Making good speed of 5-6 knots but beating into it.