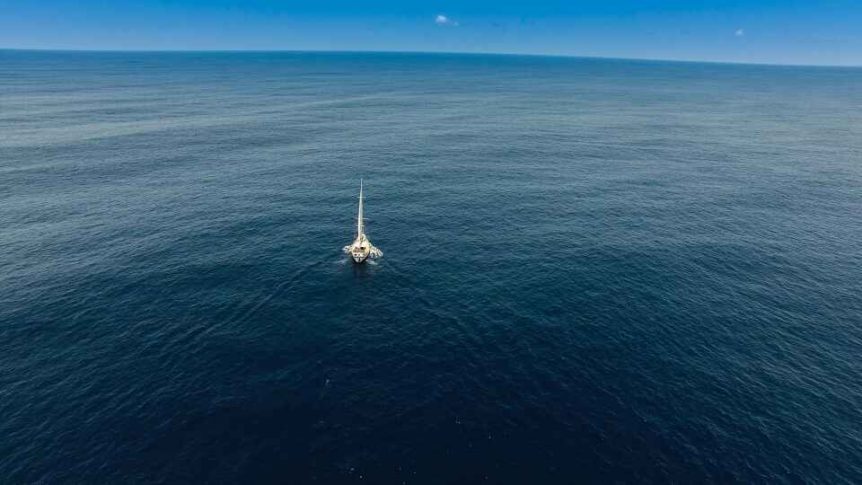 0400- Alarm goes off. It’s O’ Dark Thirty and time for watch! I relieve Uli at the helm and all is well except the wind died a few hours ago as predicted. We are now directly on course but motoring along making 4.5-5 knots. We are going slow to try and conserve as much fuel as possible because the forecast looks like more calms in our future.

0530- There is a beautiful sunrise with clear skies and calm seas. It’s a great morning to be on the ocean and I love this time, with just myself and Delos. Everyone is sleeping so it’s very quiet and very peaceful. I make myself an instant coffee and snack on some leftover pasta that was yesterday’s lunch. Before I know it watch is over and Karin relieves me. Sometimes I think a 2 hour watch is too short. Maybe next passage we should do 3 hours.

0630- Decide to get a little work done on the computer while the conditions are calm and before it gets too hot. I think I’ll do a little editing work on my latest Madagascar video.

1000- Head into the cockpit for some fresh air and sun. Decide to read for a few hours. Delos is rolling gently and motoring along nicely. Some massive swells are coming out of the south. I estimate they are 3-4 meters tall but VERY widely spaced. So wide that Delos gradually climbs up and up and up, then down down down the other side. It’s so cool to watch. I get an idea to try and capture Delos rolling over these monsters with the drone. Brady helps me to launch and I get some cool shots of Delos in the middle of the Mozambique Channel, hundreds of miles from the nearest land. I think one of them is maybe good enough to use for this blog. The only problem is the landing was tricky. For some reason I had a real hard time bringing the drone in. I think it was a combination of the motion of Delos and the huge swells. Just as I’d line up for a landing Delos would drop a few meters as she rolled off the front of a swell, which meant I had to go up quickly. Then I was way too high when we came off the back of the swell. A little scary as the battery was getting low and the drone warning me it wanted to return home due to low battery. That would have been bad as our take off position was way behind us now. I’m sure we would never have seen the drone again. Luckily Brady made a great catch and we retrieved it okay.

1200- Decide to do some more reading, then get drowsy and decide to take a little nap before my watch.

1300- Wind! We have Wind! It’s Uli’s watch and I help him get all sail up. Pretty soon we’re cruising along at 6 knots without the motor, on course even. Just as it’s supposed to be.

1400-1600- I have a really great afternoon watch. The sun is shining and the sea is calm. We have 10-15 knots NW wind and Delos is on course and sailing nicely. I decide to do some filming with the Go Pro on a gimbal. I think I got some pretty cool shots, especially slow motion shots of the waves hitting the bow. I can never get tired of sitting up there and watching that. Karin just came on watch so it’s time to rest more. I think another nap is in order :=)

1800- Karin cooks a delicious dinner of seared tuni steaks encrusted with sesame seeds. YUMMY! Rice, wasabi, and soy sauce on the side. Life is good! Decide to head to bed early and watch a little doco. We got some new movies from another cruising boat, Saltbreaker, and I pick one titled “Exit Through The Gift Shop”. It turns out to be a doco about a guy doing a doco about street art. Really very cool and it was a perfect way to end the day. Passed out and set my alarm for watch tomorrow.
Sent via satellite phone using OCENS OneMail