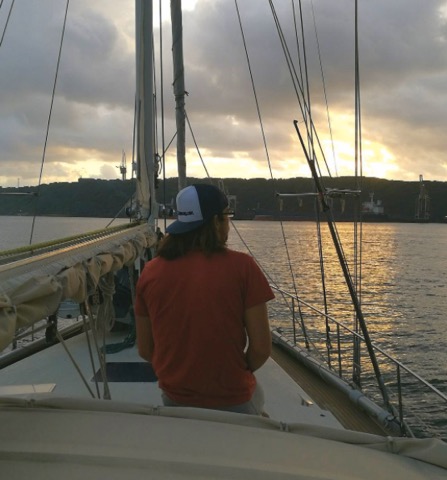 0430- The alarm goes off and I find myself feeling pretty alert even though I didn’t get as much sleep as I had hoped.  Tucker and Victoria lured us over to Convivia last night with the promise of rum and conversation.  It was too good of an offer to pass up even though we knew we had an early morning ahead of us.  But we were responsible sailors and left after only two rums.  Really hope to see those guys in Cape Town!

0500- The sun is just starting to peek over the horizon and the world is coming alive.  The weather is calm outside as predicted.  We use our last internet time to check Predict Wind and verify the forecast from last night, one last chance to make sure a gnarly SW buster isn’t looming over the horizon to ruin our day.

0530- All is looking good and were going for it!  Today is the day to head south and begin our trip around the Cape of Good Hope!!  It seems like we’ve done this drill hundreds of times- getting Delos ready for passage.  We all sort of wander around storing odds and ends that might get tossed around.  Laptops stored, dishes put away, cameras in their cases.  All is ready and with barely a word we work as a tight team to slip the dock lines and maneuver Delos out of her slip.

0600- We get the last permission from Durban Port Control to exit the harbor and we make that right turn, straight out into the sunrise and the fleet of small fishing boats that managed to wake up even earlier than us.  As predicted the wind is light out of the SW, only 5-10 knots, but directly on our nose.  We decide to motor straight into it and get out into the current as soon as possible rather than tacking.  The conditions are what we expected- not great but not bad either.  We arent breaking any speed records at 5 knots but were going in the right direction.  There is about a 1.5 meter swell running that’s slowing us down but we expect this to go away as the wind changes through the day.

1200- YEAH!!  We’ve found the current ?  The wind has also started to clock around as predicted and we put out full sail and point Delos due South on our course.  Not quite enough wind to sail so we decide to motor sail for a while longer.   With the added boost from the Agulhas current and sail we are now making 10 knots SOG.  YIPPPEEE!!  Hopefully the wind continues to clock around as predicted.  If so it will be behind us by the afternoon.

1800- The wind has clocked around out of the ENE now but its still very light, about 8 knots.  We decide to continue motor sailing to keep our speed above 9 knots.  With the vicious weather on this coast its not a place to bob around waiting for more wind..  We’re not in the passage groove yet and all our sleep schedules are still off so dinner is not organized like normal.  I decide to make myself a nice little ham and cheese sandwich with salt and vinegar chips.  Before I know it the entire bag is devoured.  Oh well.  Time to get some rest as my next watch is 00:00 –03:00…