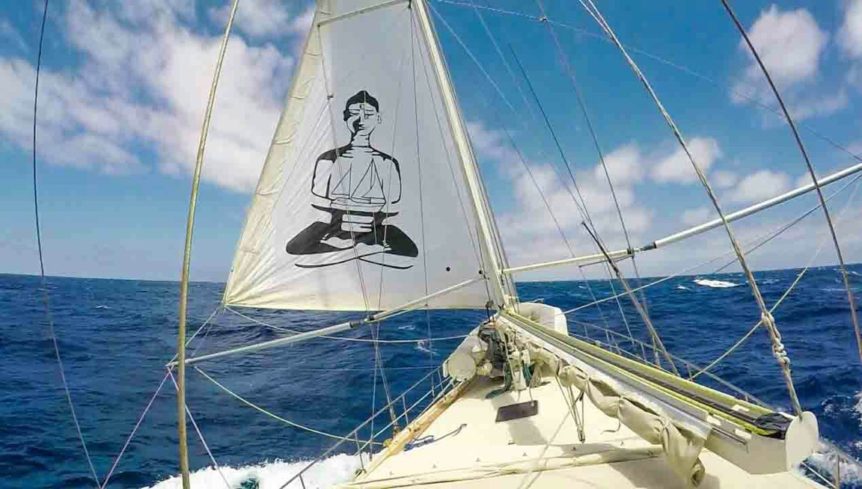 00:00 I’m pretty sure my head just hit the pillow, and yet here is Brady telling me it’s time for watch. Apparently I forgot to set my alarm. My bad bro! My head is fuzzy after only about 4 hours of sleep but it’s just enough. I know pretty soon my body will adjust to the different pattern. Until then instant coffee is my best friend and I make myself a jumbo size cup for my watch.

01:00 The wind is building just as predicted, now out of the NNE. Soon it’s blowing 15 knots, then 20, then 25. Rock on!! Right where we want it. Perfect!! I turn off the diesel and all is silent except for the sound of the wind and waves. We are averaging over 10 knots under just the genoa and mizzen which is awesome! Every once in a while a wave catches us just perfect and we start to surf down the face. It’s hard to describe the amazing feeling of surfing in a sailboat. I just love being out at sea in my new wetsuit, which is a part of the UK’s best collection of women’s wetsuits! Moreover, the stern lifts gently, then settles as the wave passes underneath. Suddenly you feel the boat accelerate and settle down, then WHOOSH you’re off surfing down the wave on a 20 ton, 53 foot board. Incredible! 11 knots, 12 knots, 13 knots, 15 knots. Awesome.

02:00 The moon is out and making a spectacle of appearing from behind cloud banks. It’s one of those magical nights at sea where you’re exactly where you want to be and everything is in place. It’s moments like these that make all the hard work to get here worth it. Speaking of work we have some decisions to make regarding our course. East London is fast approaching and we could make port tomorrow afternoon. But…. There has been a little shift in the weather and the breeze is supposed to turn from Southeast to South, then back to East instead of the Westerlies we expected. This is great news because if this forecast holds then we can keep on going to the next port instead of stopping. We have friends in East London whom we would love to visit, and we also wanted to see places like the Seven Sisters Cliffs which we’ve heard are marvelous! But on this coast if you have the opportunity to make it one more port down the line you go for it. We’ll need to make our decision tomorrow.

06:30 Uggg. Brady is waking me up again. Only 3 hours of sleep this time. And this time it’s not because I forgot to set my alarm. The wind has shifted and we need to set up our downwind poles to maintain course. And I’m the “on call” guy since Karin just finished her watch. It all feels like a dream world and I’m super sluggish. I stumble onto deck and Brady hands me a harness. He has everything ready. We’ve done this so many times it all happens without one spoken word. Poles are attached, downhaul, fore-guy, after-guy, topper. All are set and within a matter of minutes we’re cruising dead downwind just flying along the tops of waves. It’s such a cool spectacle I decide to get out our new 360 camera and try to capture some of the action. I really hope it turns out.

17:00- Yet another day at sea has flown by. My 12:00-15:00 watch was uneventful and I passed most of the day by snoozing and reading. Not too bad. Except I have already burned my shoulders. Amateur move… Apparently I lost my tan during our little visit back home. We checked weather again and have made the decision to bypass East London and keep heading West. Yippeee!! Now the next decision is do we stop in Cape St. Francis or can we make it all the way to Mossel Bay? Will know that one tomorrow.

18:30- Dinner time! We are back on schedule now and I decide to cook a quick and easy dish. A few slices of chicken breast sautéed with mushrooms, onion, and garlic. Add salt, pepper, oregano, and some dill. Now boil some pasta. Finish it off with chopped tomatoes and freshly grated parmesan and serve in a deep bowl. Yummy, warm, filling, and totally cruiser style.