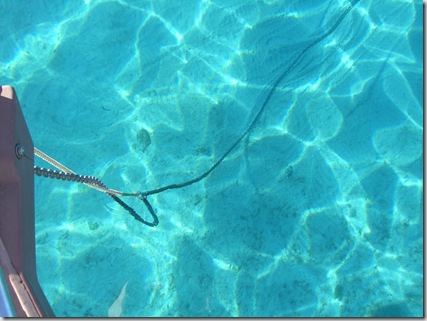 Yep, that’s our anchor chain laying on the sandy bottom in Oponhu Bay on Moorea. The water is so clear and calm it’s like being anchored in a sandy bottom swimming pool. 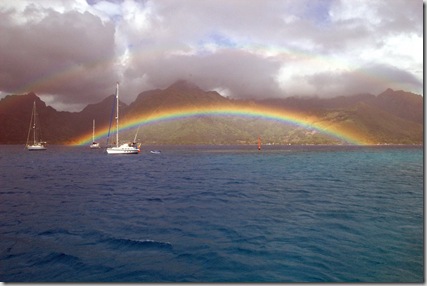 We had a great sail crossing the channel between Tahiti and Moorea with 20-25 knots pushing us along making the 20 mile trip in just over 2 hours. Upon arriving we found our friends on Capaz, Totem, and Ghost already in the anchorage. During afternoon sundowners we made plans to hike to the top of the mountain to a point know as “The Belvedere”. 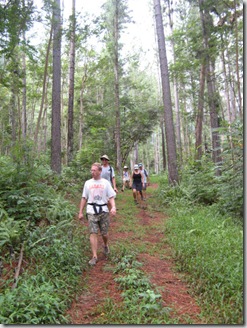 When the morning came, I was ready in my new shoes and my ankle brace for hiking, and we set off early at 7:30AM to beat the heat on the way up. The hike was beautiful leading us through the meadowlands that make up the island’s interior. Farms and cultivated land abounded, something we hadn’t seen on other islands we’ve visited. Apparently, Moorea is the pineapple growing capital of French Polynesia. We walked through the grass fields taking time to feed the horses and see the ruins along the way. 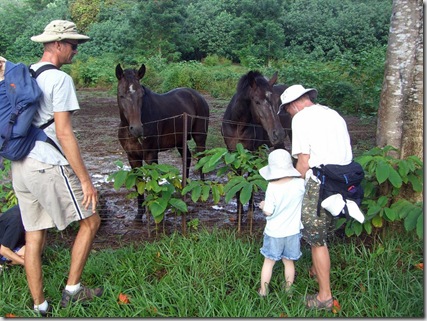 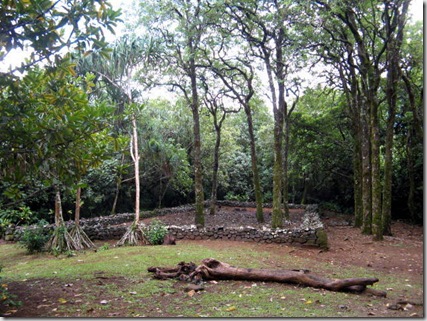 The walk was steep but doable since there was a paved road leading all the way to the top. The view was incredible, allowing us to see both Oponhu and Cooks bays with the dividing mountain range in between. After enjoying our picnic lunch at the top the trip downhill was a breeze. The total round trip hike was just over 10KM. Although it was not super difficult or tiring, it was quite an experience! Imagine, the ancient people of the land would walk for hours, days, and even weeks sometimes to get where they wanted to. Such long distance hikes (known as thru-hikes) are still undertaken today, as a way of experiencing the outdoors differently and seeing how far you can go. Maybe we’ll learn about thru-hiking too, and take it up someday! 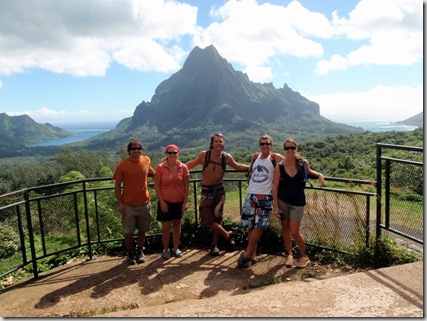 Feeling good about our land based exercise we spent some time enjoying the incredible snorkeling in the shallow lagoon over the next few days. We’d heard of a spot on the other side of the reef where the local resorts take their guests to interact with sting rays and black tip reef sharks. On the way we found another set of marked buoys, which in these parts typically means something to see down below. We donned our mask and fins and dove in for a look. We were surprised to see underwater stone carvings littering the lagoon floor. They were large in size, some being 4 feet wide and 3 feet thick. They were obviously placed by the resorts as a tourist attraction but still cool to check out. 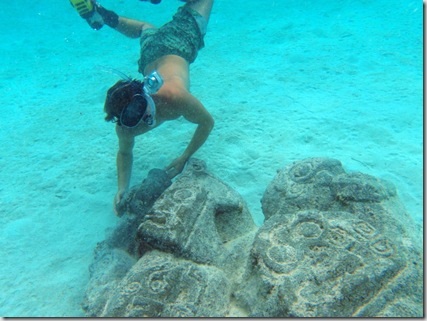 About 15 minutes past the underwater carvings by dinghy we found the chest deep water that marks the sting ray spot. Being hand fed by the tour operators, these sting rays have become somewhat domesticated over the years. The dinghy is immediately swarmed by sting rays looking for a handout as soon as you tie up. 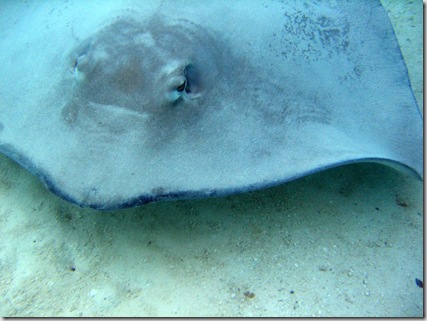 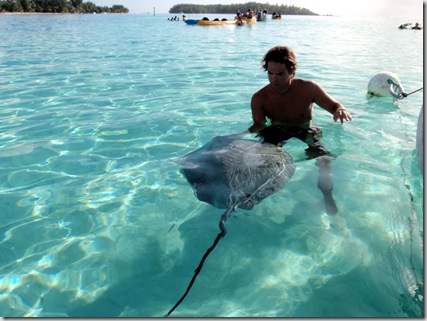 The experience was very cool and we ended up returning to the sting ray feeding site 3 more times while in Moorea. One unexpected surprise was the abundance of black tipped reef sharks at the site, some measuring up to 6 feet. They curiously swim by always observant of you, but always keeping a comfortable distance. At one point I counted 12 sharks swimming in the current, just where the shallow sandy sting ray area drops off into the 30 foot deep channel. It’s amazing how comfortable we’ve become with sharks over the past few months. It’s just not possible to get in the water without seeing them anymore. As long as you are respectful and non-threatening (don’t chase them) they seem to maintain a comfortable distance- just far enough to satisfy their curiosity and keep an eye on you. 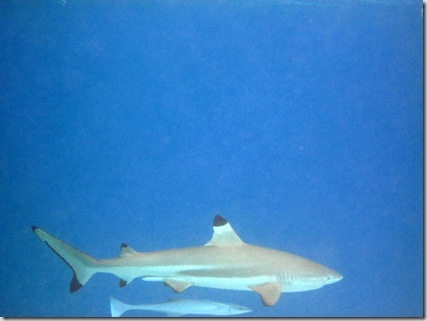 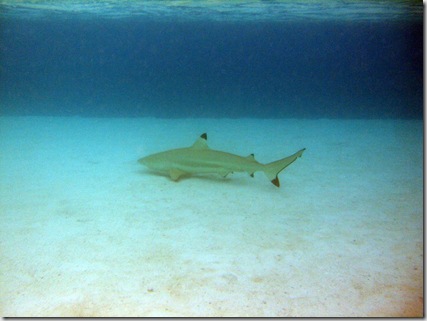 We had plans to head back to Tahiti for Brad on Capaz’s birthday party and also to pick up Octavia and Petter from the airport, who where flying in from the States for a three week visit on Delos. They had just recently done the Baja Bash, sailing Bella Marina safely back to San Diego after their Mexico cruise. The weather just wasn’t cooperating with big winds and seas making the passage to Tahiti uncomfortable at best. The waves and wind generated by the trades get funneled between Tahiti and Moorea, and if a stronger than normal trade wind sets in the channel can become dangerous. With this in mind all the boats decided to stay put in the safe anchorage for a few more days. We sent a quick message to Octavia and Petter via our Iridium letting them know to meet us in Moorea via ferry.

Octavia and Petter safely arrived after their flight from LAX to Tahiti and took a short ferry ride across to Moorea to meet up with us. We immediately fell into our old ways kicking off the reunion with a float party off the back of Delos. 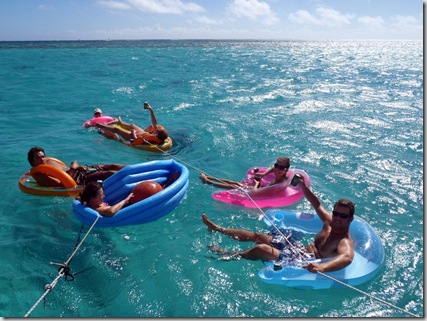 With all the boats hunkered down awaiting the weather we decided to have Brad’s (Capaz) birthday party on the beach. Since it was a potluck party we decided to try something a little different and hunt down our own dish. While hiking a few days ago we’d seen a promising coconut crab hunting spot. We set off at midnight with our spotlights and bucket in hand. We learned in Apataki the easiest way to grab these land based crabs is to catch them outside their holes at night, stun them with a bright light, then grab them by the claws to toss them into the bucket. 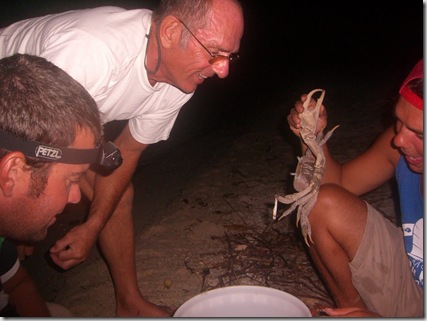 We spread out across the coconut palms in search of crabs. The four of us (myself, Brady, Roger from Beaujolais and Brad from Ghost) set off fueled by the liquid courage we’d enjoyed earlier in the evening. The night echoed with the cries of “Got One- bring the bucket!” or “Ouch” as someone mis-timed their claw grab and paid the price. The claws on these crabs are incredibly strong and capable of breaking a finger if you’re not careful, obviously they are tough enough to burrow into the coconuts that are their primary food. We threw an empty beer can into the bucket only to see it smashed and nearly cut in half by the pinchers. 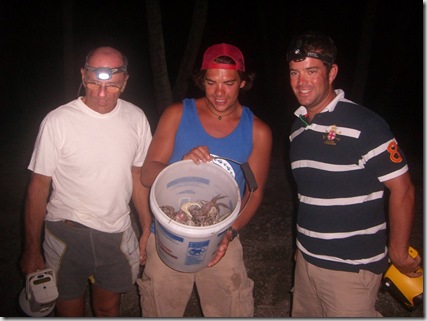 We only quit when the bucket could hold no more. Their sweet delicious meat needs no butter and they were definitely the highlight of the potluck the next day. Later on that night greenman came out to entertain the kids while his “bodyguard” distracted them to keep the suit from being destroyed, allowing greenman to make a clean escape. 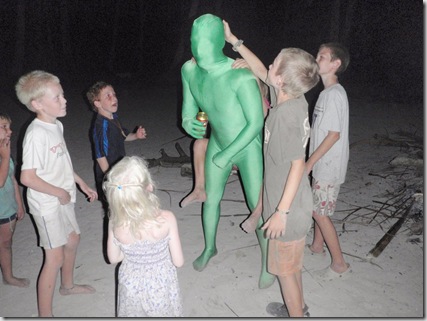 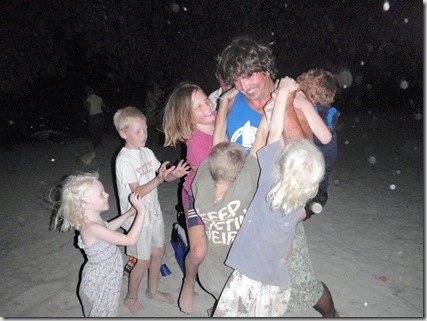 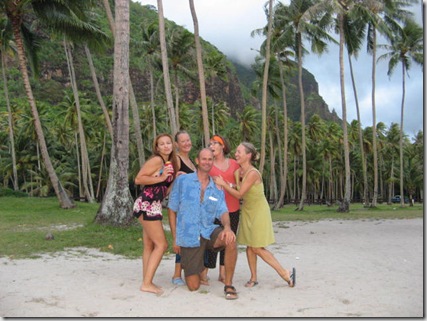 After a few more days of lounging the weather finally cleared and we headed back to Tahiti to provision in preparation for our dash west to be in Bora Bora by Bastille day. We shared a fantastic few days and we are looking forward to the rest of it. There really is no better way to travel the world than by sea. We feel so lucky to have our boats. We know that everyone isn’t that fortunate, but it’s still possible to travel the open seas on cruises from liverpool and other ports across the UK and USA. It’s an experience you’ll never forget!