We loved Moorea so much after we went there for the yacht rally we decided to go back for another visit.  Our friends, Kat and Brad, who sailed with us the first time, also wanted to see Moorea again but this time on their own boat, Ghost.

We all talked about renting scooters on Moorea from the first time we went there.  It is such a picturesque island and only has one road that circumnavigates it; unlike Tahiti there is no traffic and really no where to get lost.

Brad, Brian and I took the dinghy into town one day and found a place that rented scooters.  We reserved four for the next morning and went back to our boats as excited as little school girls.  The next morning we took 2 dinghies into Cooks bay to pick up our rides for the day.  There they were in front of this little shack, lined up.  The brand: Stalker.  What a perfect name for a scooter. We all signed some sort of liability contract, put on helmets and were ready to go.  A guy standing near them showed us how to start our Stalkers and asked if we were good drivers.  Of course, all of us said yes.  Brain and Erin shared one while Kat, Brad and myself got to ride solo. 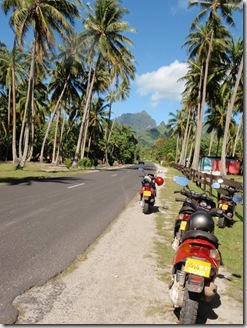 Our first stop was the local store where we stalked up on baguettes and meats for lunch.  Earlier in the week, when I wasn’t feeling to well, the rest of the gang walked up to one of the peaks on Moorea.  Since I hadn’t seen the view we decided to take the Stalkers up there.  The road to the lookout winds back in forth up into the jungle mountain terrain.  It was a pretty crazy ride because Brad, Kat and I were basically racing up this mountain not knowing if a car or a cliff was around the next corner.  On the last turn I ended up passing Brad, most likely because I’m a better Stalker rider.  Once we were at the top you could see both bays, Opunohu and Cook.  We could also see parts of the road winding up hill that we had just conquered.  It was so quite at the top that I’m sure all the other tourists and locals could hear the buzzing of the scooters as we rode up.  They probably even got a glimpse of us flying around the corners.  I’m sure they were very impressed with our Stalker skills.  After taking in the view we raced back down to a pineapple farm and got fresh juice and sorbet. 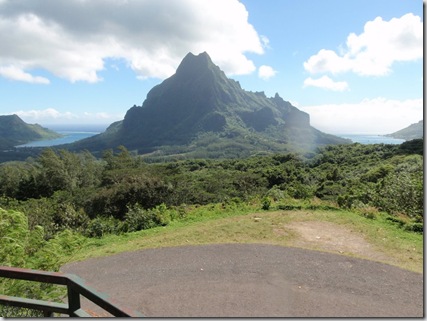 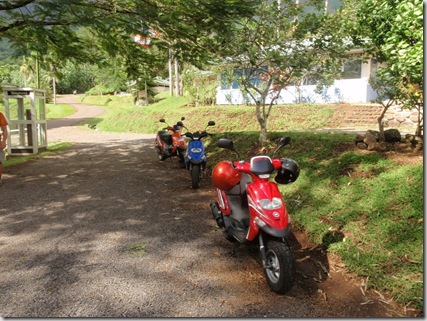 Our next stop, about a 30 minute ride away, was a little public swimming area where we parked our stalkers, made sandwiches and went for a swim.  (I like to use the word stalker if you didn’t notice). 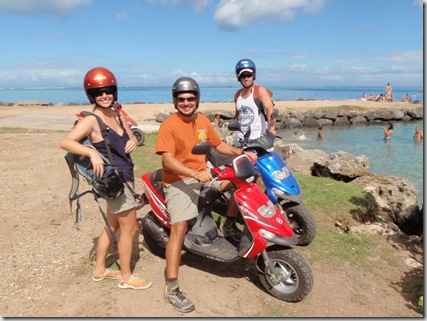 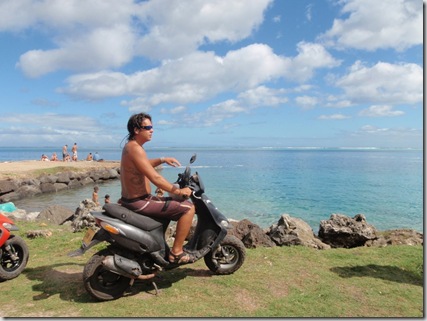 When we  were looking at the local map we found a waterfall up in the mountains pretty close by, so that soon became our next destination.  In my lonely planet guide book they talk about the same waterfall and how you can take a car part of the way then walk another half hour through muddy jungle to find the waterfall.  We found the road that led us to the trail and started our bumpy trek up hill.  You could easily see where we were supposed to stop and walk the rest of the way but we passed by it with out thinking twice.  The road turned into foot deep, muddy ruts most likely caused by cars and trucks getting stuck.  I didn’t give our 50 cc stalkers, with no traction on the tires, enough credit.  We took them deep into the jungle, until we came to a river.  Brad and I stopped, Kat soon caught up and Erin had hopped off the other scooter because it was a very uncomfortable ride. 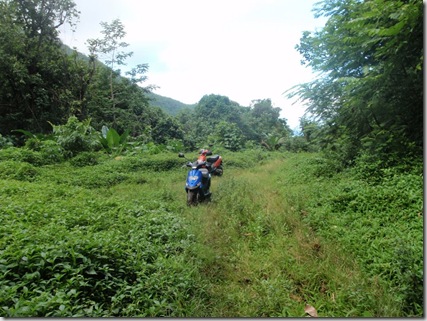 Brian soon met us at our stopping point with this crazy look in his eyes and started trying to do wheelies around us.  I turned to Brad and said “well I guess this is as far as we can get on the stalkers”.  Brian just looked at us and said “watch this”.  It was as if he went back to his teenage motocross riding days and a switch in his head flipped.  He gave us that same crazy look, did a few donuts around us then took off full speed towards the river.  Brian splashed through the river leaving behind mud and water flying everywhere then disappeared uphill into the jungle just as a stalker should. 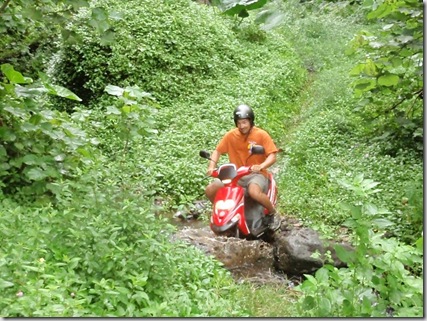 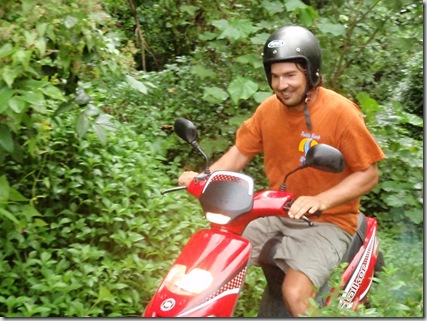 The rest of us started walking up the trail and found Brian standing next to the scooter.  Blocking the path was a fallen tree. 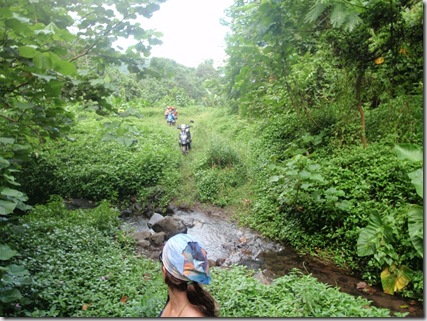 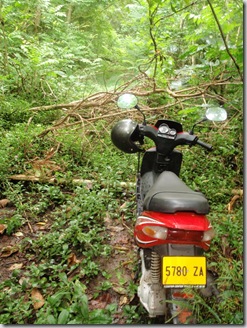 It was amazing he made it that far though.  The hike from there was only a few minutes.  Although the waterfall was beautiful it wasn’t nearly as impressive as what those little stalkers just did.  Coming down the mountain was just as fun, sliding through mud the whole way. 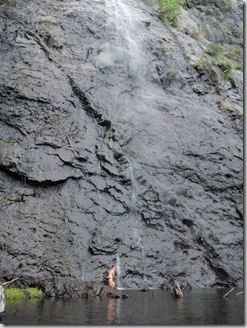 As we got back to the main road it was surprising that all the stalkers still ran.  Everything was good so we continued around the island until my scooter stalled in the middle of the road.  It turns out they forgot to fill my tank with the others and with none of the gauges working we had no idea what went wrong.  As Brian and I opened the tank we could clearly see there was no gas.  Brad took off to try and find the nearest gas station while Brian and I searched for some sort of tube so we could siphon the fuel from his scooter.  We came across an old electrical wire with casing that would do the trick.  Just as we siphoned enough fuel to fill a coke bottle that was laying near by, Brad pulled up with another coke bottle filled with fuel from a nearby gas station.  Out of principal we used the siphoned fuel that we worked so hard to get to start my scooter.

The journey continued around the island until we stopped at one of the nicest resorts on Moorea for a drink and swim in there infinity pool.  Hanging out at the hotel bar was interesting but defiantly put things into perspective in relation to living on the boat that we are traveling on versus flying to a place like this for a week.  This is an amazing vacation that we are on but it is obviously so much more, our house is with us. 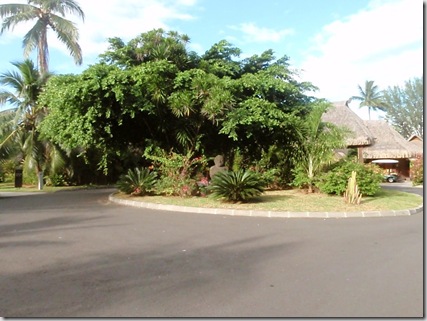 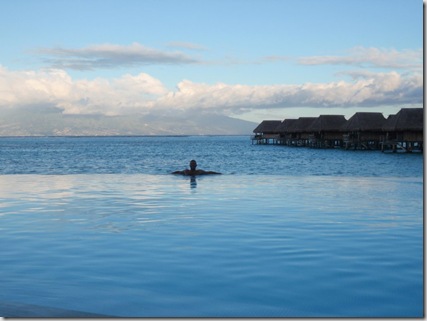 The day ended as we completed our around the island tour while the sun was setting behind us.  It is surprising that all of our Stalkers still ran properly at that point.  They were covered in mud and grass, and I’m pretty sure mine had one less light then when we started.  They were defiantly not built to put up with what we put them through. Brian even had one last wheelie when we returned them.  We recently checked the credit card that they were on and everything was as it should be.