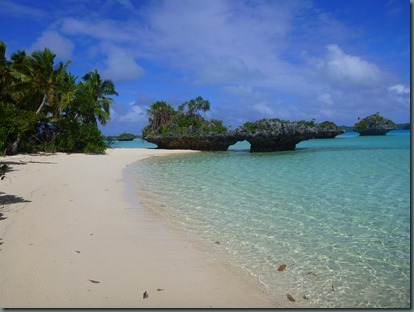 “What has been your favorite place?”  This question is by far the most common we get from people and also the hardest to answer.  The island of Fulaga (pronounced Fulanga) in the Lau group of Fiji may be the answer from now on.  Fulaga is a horse-shoe shaped island in the Southern Lau group of Fiji’s untouched waters and is by far one of the most beautiful places in the South Pacific.  Its inner lagoon is dotted with hundreds of small limestone islands with palms rising from them. 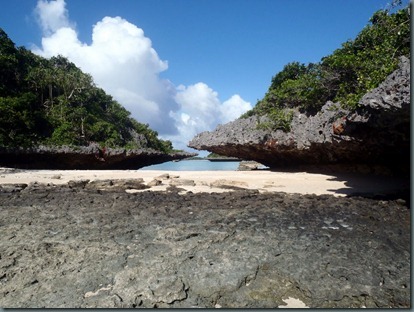 The bases of these islands have been worn away over time by the clear turquoise water to give them a mushroom top shape.  Throughout the lagoon is an abundance of picturesque white sand beaches stretching as far as you can see.  If the jungles of the Marquesas, the clear turquoise water of Bora-Bora, the limestone formations and caves of Niue and the beaches of Tonga all had a child this would begin to describe Fulaga.  Anchoring here is as good as it gets with calm protected bays everywhere, none of which are deeper than 20 ft., all with sand bottoms. 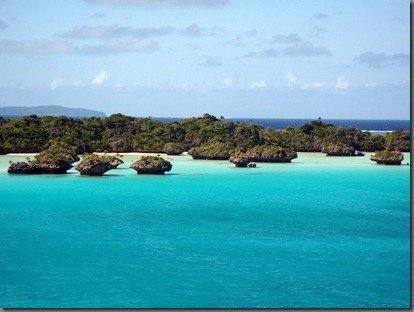 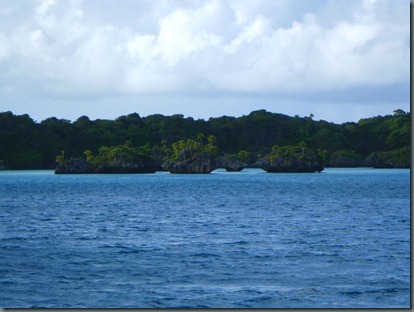 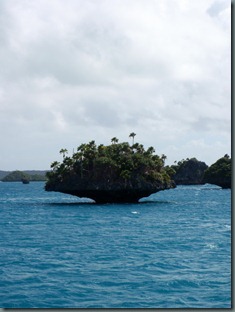 We entered the pass at 19 07.243’S 178 32.350’W with a bearing of 205 M.  The pass is about 50 meters wide and the coral edges are easily visible.  Apart from a few reported bommies toward the inside of the pass, which can easily be navigated with someone on the bow and good light, the minimum depth we saw was around 20 ft.  Paul and I took the lead in the dinghy to be safe and guide Delos in with frequent depth checks looking for the closest anchorage.  After days of beating into the trade winds we found an ideal, perfectly calm anchorage in 13 ft., sand, at 19 08.131’S 178 32.266’W.  We all were in need of a good nights rest and crashed pretty early.

“Bula, Bula, Bula”  Chico said from the fiber glass dingy as it pulled up next to Delos around 11:00 a.m. the next day. She had a huge smile even though only having a few front teeth left. 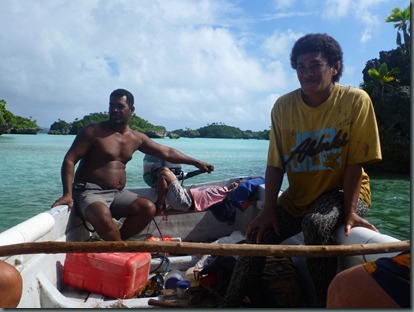 Chico on the right and her husband Mele driving.

The fiber was filled with about 6 women all out on the water for a lovely Saturday of net fishing.  The man driving was Mele (MAY-lay), the “mayor” of the main village and the husband of Chico.  “Where you come from?”  Chico asked.  “The 3 of us are American and he is from Australia”, I said while pointing to Darren on the paddle board.  For some odd reason Australians have strange reputations in these islands and always get shit from the locals, which of course obligates us to give him shit as well. Darren reckons it’s because Australia always beats Fiji at rugby. “Oye?  hehehee, Australia” Chico said. We told them we would come into the village later that day and meet everyone and do our Sevu-Sevu with the chief.  Brian showed Mele our Lau permit who starred at it blankly for 5 seconds then handed it to Chico.  We came to the conclusion he could hardly speak English, let alone read it. 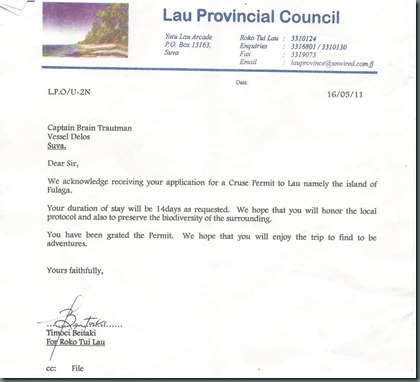 “Permit” granted to Delos for our visit to the Lau group. The last sentence is priceless.

They pushed off of Delos all smiling and giggling and headed for the mangroves to do some more net fishing.  An hour or so later only Mele and Chico returned inviting us to go fishing and collect oranges, then they would lead us to the anchorage in front of the village once they caught enough fish. Of course we jumped at the opportunity for random villager interaction and piled into the fiber.  In the villages thus far only the women fish with nets so it was a spectacle for these women to see four grown white men jumping around in the mangroves and collecting fish for them.  They laughed and teased us the whole time.  We took a short break and went back into the mangroves which turned quickly into jungle.  Two minutes away from the fishing spot was a huge orange tree.  Chico wove a basket out of palm fronds in a matter of minutes and loved showing off how fast she was at it.  Soon after, the basket was filled with oranges and we returned to collecting fish. 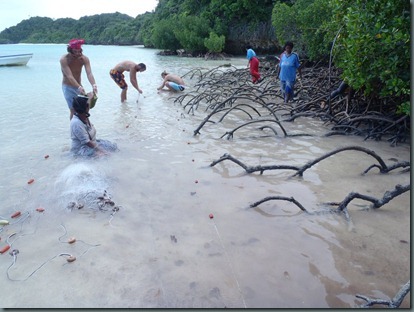 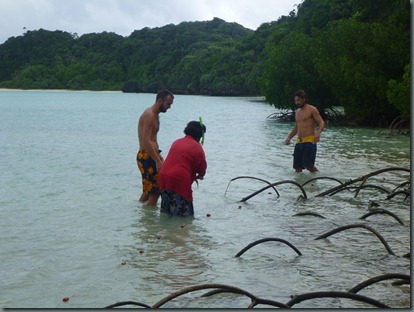 Fishing with the women in the mangroves. 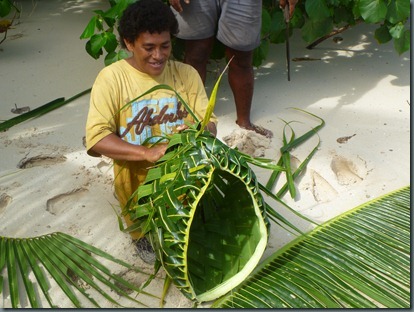 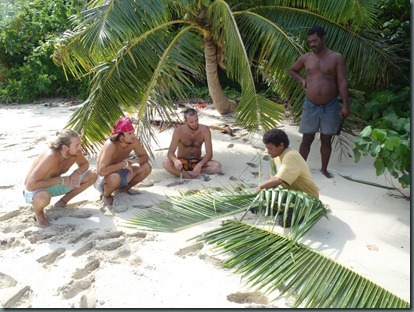 We all watched like it was a magic show. 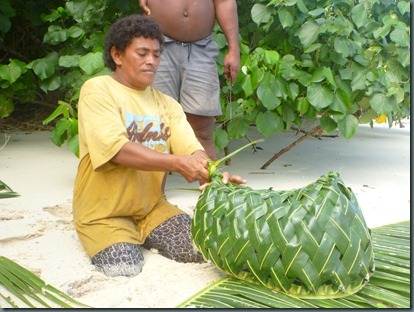 Boat loaded with oranges and fish.  Check out the anchor on the right (piece of coral).

Chico later asked if we had a spare two liters of premix fuel because the supply ship wasn’t due to arrive for another five days.  Instead of giving them our precious fuel we came up with an alternative plan that made everyone happy.  “How bout all of you pile onto Delos and we will tow your fiber to the village, saving you fuel”? Brian suggested.  Chico looked so surprised at the idea of us allowing them to ride on the “big boat” as they called it.  They gratefully accepted the offer and one by one piled into the cockpit of Delos. 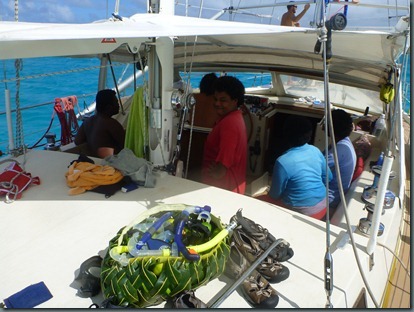 With me up the mast looking for shallow areas and a local pointing the direction of the village, Delos wove in and out of the limestone islands until we came into a super protected lagoon with 3 or 4 men, each on a traditional Fijian canoe,  line fishing. 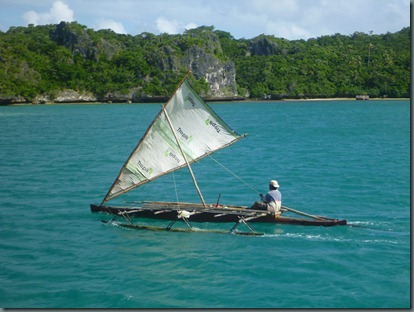 Fijian sailing with old tarp as a sail.

We anchored at 19 08.935’S 178 33.944’W and sat around while Chico and the gang went looking for crabs.  As they passed by in the fiber an hour later they waved at us to follow them to shore in our dinghy and walk to the village.

Village life in Fulaga is pure and simple.  They make their money from carvings that get sent to the resorts and sold in the gift shops, although money is pretty useless in the villages because the carvings are also the main currency on the island.  An 8 inch carved bowl is worth $8 credit in the shop, a 9 inch carved bowl is worth $9 and so on.  The shop owner then ships all the carvings back on the supply ship to be sold to tourists.  Everything in the simple shop is purchased using this barter system for carvings. 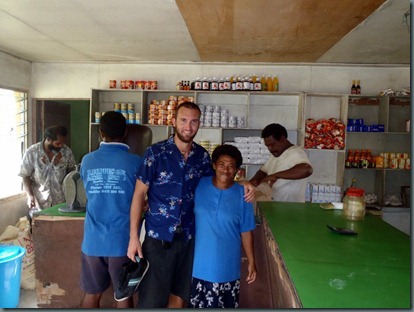 Like other islands they live off a diet of fish, coconut, cassava, sweet potato and a type of sea algae they call “sea grapes”.  Everything is of course boiled or cooked somehow in sweet coconut milk.  The main reason why we loved Fulaga so much was simply the people.  As we walked into the village we immediately noticed the well kept yards and homes.  Even the dirt around the huts was raked daily. 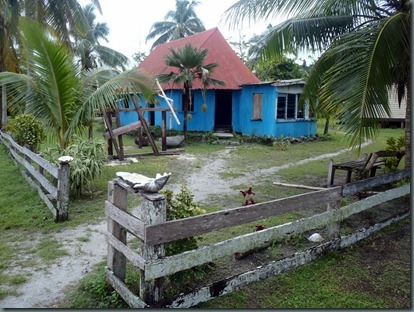 The men stopped what ever they were doing to give us a big smile, say “bula, welcome to Fulaga”.  We weren’t assigned a village guide like every other village nor were we asked for anything.  We were able to walk around the village as we pleased when ever we really wanted, in fact each time we came to the village it was another person we met and talked to for a while.  Children from everywhere would come running toward us and follow us everywhere, holding our hands.  A few were so amazed with our skin they would rub our arms while looking at there own.  “They don’t see too many Kaipalangis (white person)” one of the villagers explained. 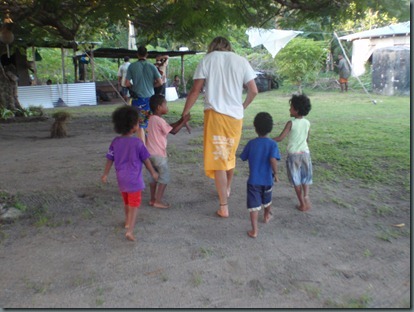 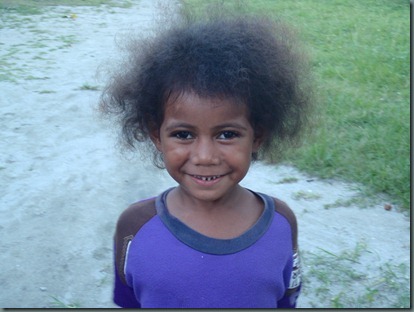 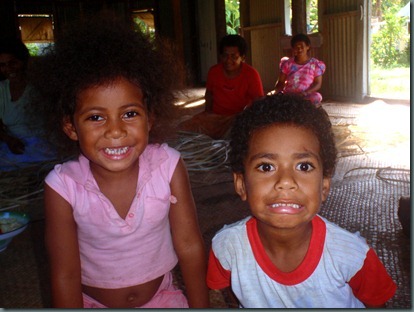 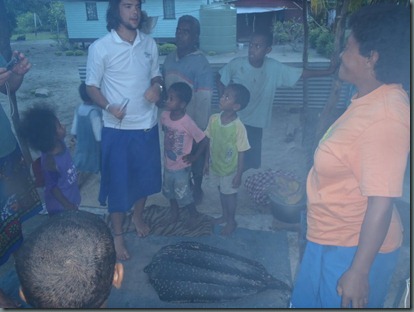 They only see about three boats a year here and of the three one is a small ship that anchors outside the reef and takes old European tourist in to one of the pristine beaches for the day, no interaction with the village occurs though.  The other cruising yachts that happen to make it all the way to Fulaga head straight to the one village that is visible from the inside of the lagoon and anchor there. Chico and Mele happen to be from a village on the outer side of the island which is connected to the lagoon by a 20 minute walk through the island.

We spent 8 days exploring Fulaga and could have easily spent another 3 weeks there.  We wake boarded in and out of the limestone islands, held human remains of victims from cannibalism days, crawled from one kava party to another, made children cry because you were first white person they had seen, dove the most striking coral walls and met the most beautiful honest people.  Fulaga truly was a once in a lifetime experience. 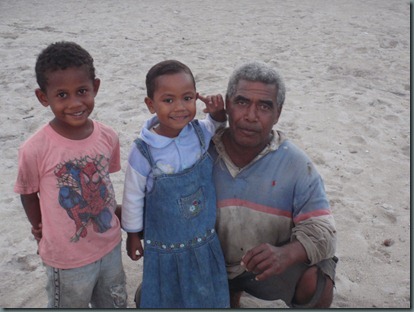 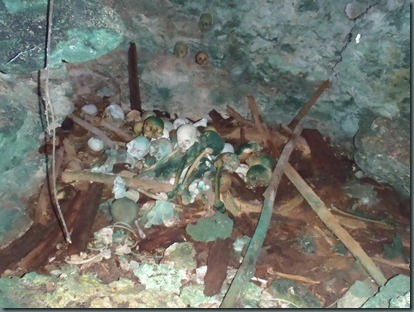 Yep, all those remains were once eaten by the villagers. 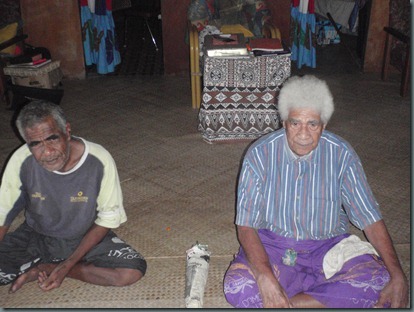 The Chief , on the right, accepting our Sevu Sevu. 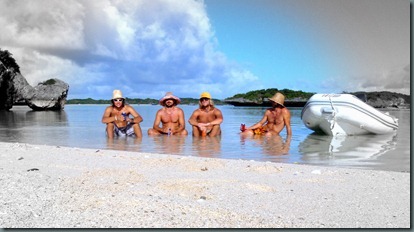 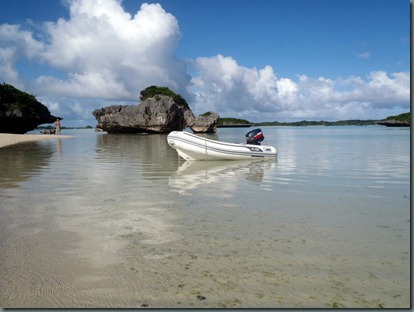 Delos crew chillin’ out on a secluded beach.