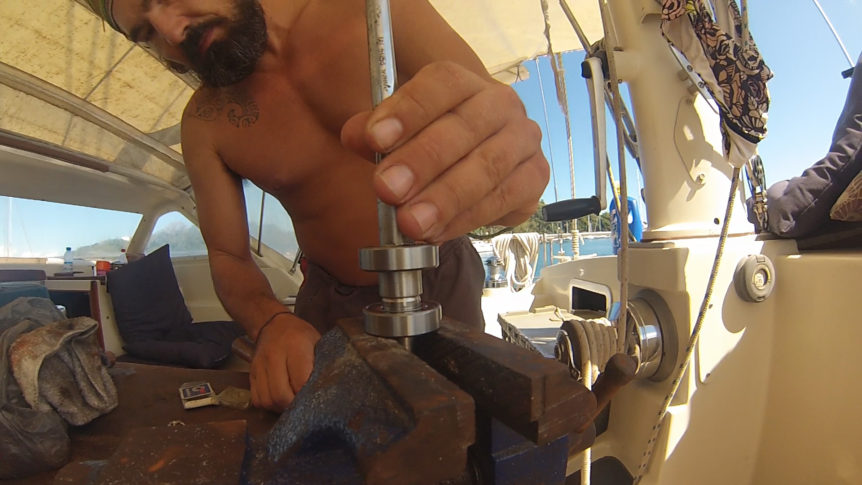 Delos and her crew of 7 would have this tropical paradise to ourselves for an entire month. No other boats, no other people, just us and our own private little atoll. 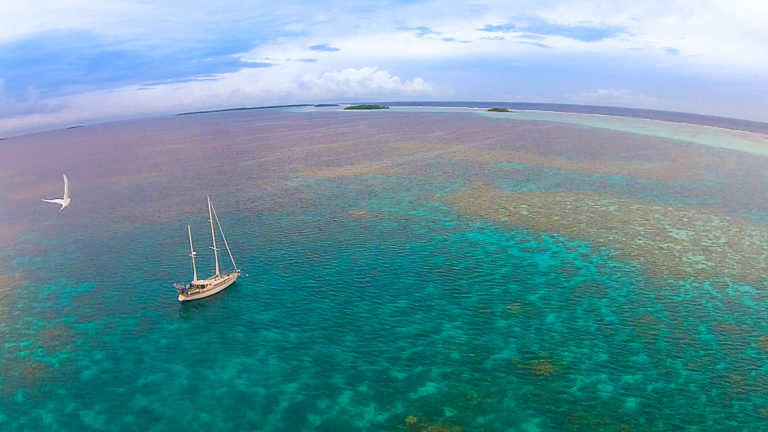 The Salaman Atoll of Chagos has 5 major islets with connecting reefs that protect its lagoon. After about a week lounging at the northern islands we decided to move a few miles south, to Boddam Island. At one point there was a settlement on Boddam farming copra, but for the past 50 years it’s been completely abandoned and left to the jungle to reclaim. With an exploring opportunity we couldn’t pass up we prepared Delos for the short trip through the center of the atoll.

Ever since watching Captain Ron that awesome line “A Diesel loves its oil like a sailor loves his rum…” has stuck with me and I have a little ritual every time we start the Volvo TMD22 up on Delos. Check the oil, check the coolant, and have a general look around the engine room for anything out of place. It’s just second nature now. The oil level was perfect and the coolant spot on. All looked well but as I started to climb out a little puddle caught my eye under the transmission. Oh no! That’s not supposed to be there!

A dab of my finger and a touch to my tongue later I knew we had a salt water leak. Not a major one, but enough to be concerned with. Things on a boat left to their own devices often find a way of worsening themselves in a hurry. After a few minutes of inspection I found the source of the leak. It was the raw salt water pump responsible for pumping cool ocean water through the heat exchanger. The leak was coming from the front shaft seal (read more here) and was fairly small. We certainly wouldn’t sink from it anytime soon.

The real problem was the droplets of water would run down the shaft and onto the bearings, slinging nasty salt water all over the engine room as it spun. Eventually the salt water would work its way into the shaft bearings, causing them to seize, at which point we’d have a very serious problem. Our trusty main engine had suddenly become nearly worthless. We could only use it when absolutely necessary until we got the parts of a ship needed for it to be repaired. 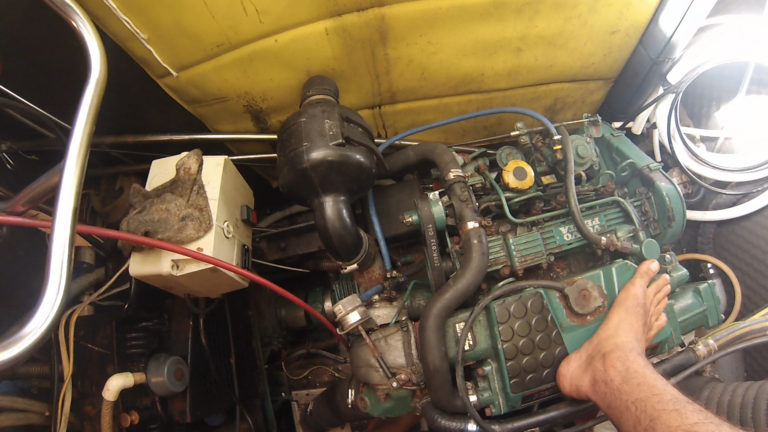 We didn’t have a rebuild kit on board and the closest chandlery was in Phuket, Thailand thousands of miles away. We resigned ourselves to making due as a pure sailboat for the next month or so. Luckily this area of the Indian Ocean is known for reliable easterly trades and I was certain we could make it to our next stop in Madagascar without too much drama. With months and thousands of miles left in the season my priority was making sure a new pump was waiting for us in Madagascar.

We have an Iridium Go! Onboard that we use for email at sea, and I was hammering out communications to our family and other cruisers. Since we had no internet I needed help to find the right parts and figure out if shipping to Madagascar was possible. The good news first- we could get the parts shipped in about a month. The bad news- Madagascar is a funny place about receiving valuable shipments. Other cruisers relayed stories of items disappearing or held indefinitely until the correct “gift” was delivered to the official in charge. With a value of nearly $800 US I’m sure our pump and spares would have some unwanted attention from customs. Shipping was out, we’d just have to improvise when we arrived and hope for the best.
The days melted together as they do when cruising. Sunrise merges into sunset in an endless cycle and the weeks flew by. We were running our Onan generator as usual one evening to make water and top up the batteries when I noticed the charge current for our house batteries fluctuate wildly then drop to nothing. Oh great I thought, what now? Back into the hole I went to inspect the situation and found our brand new MasterVolt Charger showing an error code on the digital display. It was powered up just fine but reporting high voltage on the battery side and had shut itself off. I felt like poor Delos was shutting down one system at a time.

Now this is an even bigger problem for us than the pump. Delos is a very electric boat. We have electric furling motors, winches, navigation, heads, pressure water, and freezers. Not to mention the crew depends on our laptops for both entertainment and work which is a huge power draw. We do have 600W of solar power but it’s still not enough. Normally we need to run the generator every day for an hour, especially with 7 people onboard. Our back up is to charge with the alternator on our Volvo, which was out of the question given the pump. A Hyster winch and its part can be bought online in advance in case of any malfunctioning of the mechanics of the boat.
So we went into ultra-power conservation mode. We consolidated the freezers and turned them off at night. We used nature’s toilet instead of the heads and stopped charging our laptops. It all added up and suddenly we were living 100% off solar energy. It felt great knowing that you really can conserve power if the entire group makes an effort. I know I am going to be using more solar energy when I return back home and place my own solar panels on the roof to produce sustainable energy. We were scheduled to set sail in just a few days and we needed a little more juice for the trip. We would be hand steering for the next 2,000 miles because the autopilot is just too power hungry, but I wanted to make sure we could leave on the radios, navigation, and sailing instruments.

Our wind generator had blown up its regulator some years back in Fiji during a squall so my plan was to repair this giving us the little extra juice we needed for the passage. While troubleshooting our battery charger I had pulled out Nigel Calders book “Boat Owners Mechanical and Electrical Manual” and noticed a section on voltage regulators. I felt pretty confident I could make my own after reviewing his schematics and set out soldering up a crude bridge rectifier. It took an afternoon of digging around the boat and soldering but at the end of the day it worked! We still had to massively conserve but we could breathe a little easier. 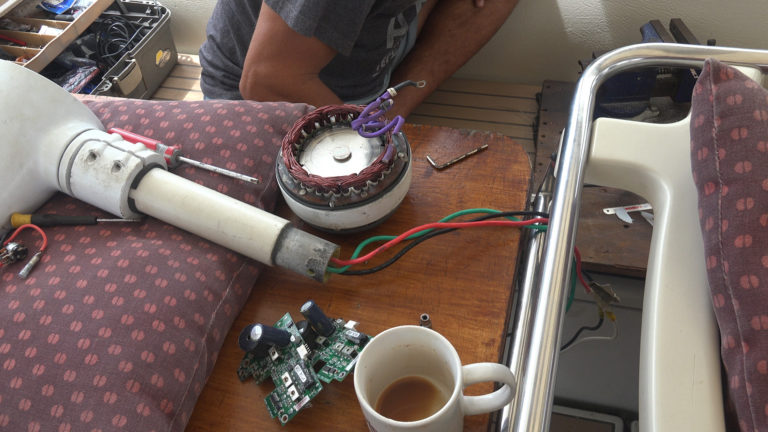 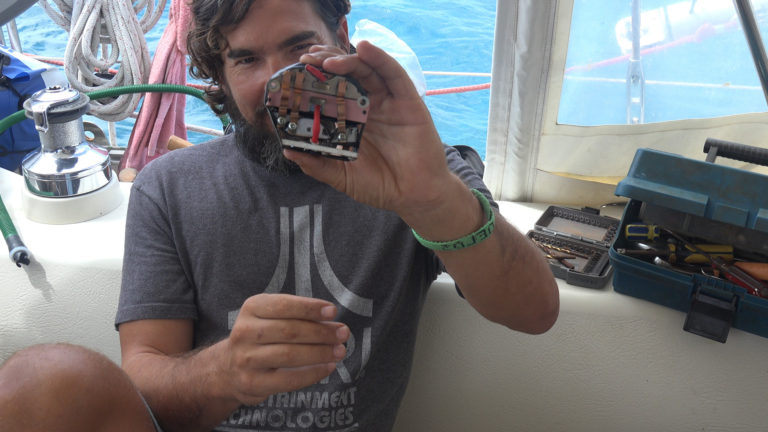 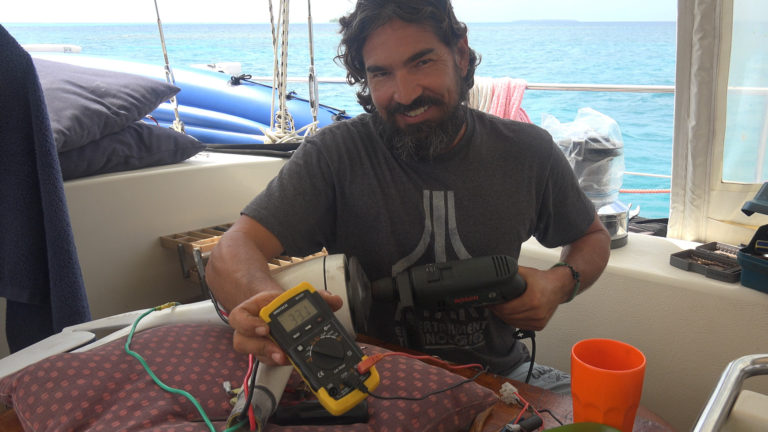 The sailing was beautiful and after 10 days of hand steering we made the coast of Madagascar and dropped the hook in Nosy Be. The wind was perfect and we only had to motor the last little bit into the harbor. My next week was consumed with tracking down parts to fix our pump. I explored back alleys and every hardware and automotive related shop in the village. I needed bearings, seals, and some sort of hydraulic press to get it all back together again. Madagascar is a French speaking country, so it took lots of patience and hand gestures. Finally I resorted to carrying a plastic container full of broken parts with me everywhere, so I could just pull out a greasy bit, smile and point. Then one day I hit the jackpot. I met an Austrian expat that had been living there for 25 years. He knew just about everyone in town and sent me to the German expat with a hidden auto repair garage. Bingo! Within two days I had the pump good as new. The total cost including parts and labor- about $18.00 US. A far cry from the $800 plus shipping hassles I was prepared to shell out for a new one. 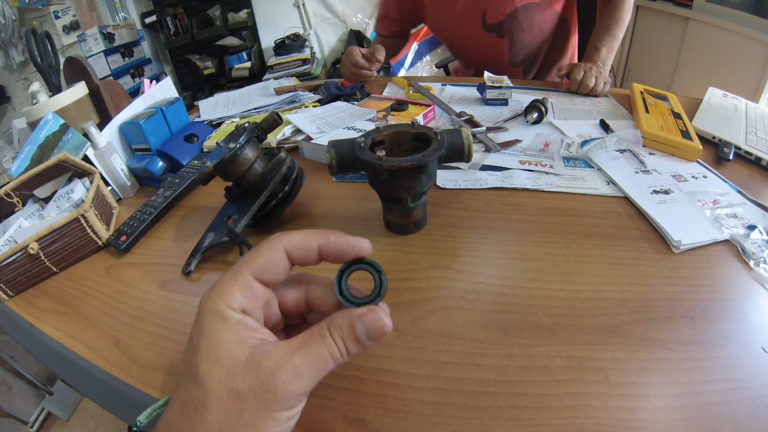 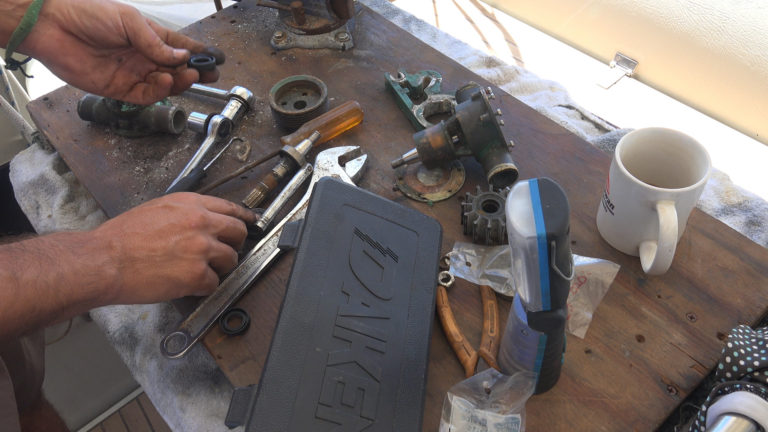 My new Austrian friend was very nice and took me on a tour of his house. He was particularly proud of his new swimming pool. Apparently he had just upgraded the whole pump and filtration system to run off of DC pumps so he could use solar during the day. Behind his desk I noticed a brand new 24V Victron battery charger. He said it was an extra unit and just sitting there. My eyes must have nearly bulged out when he offered to sell it to me for a fraction of the cost of a new unit. 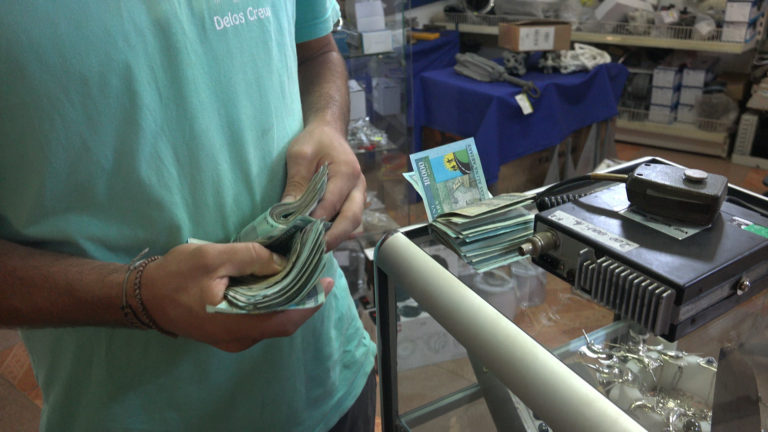 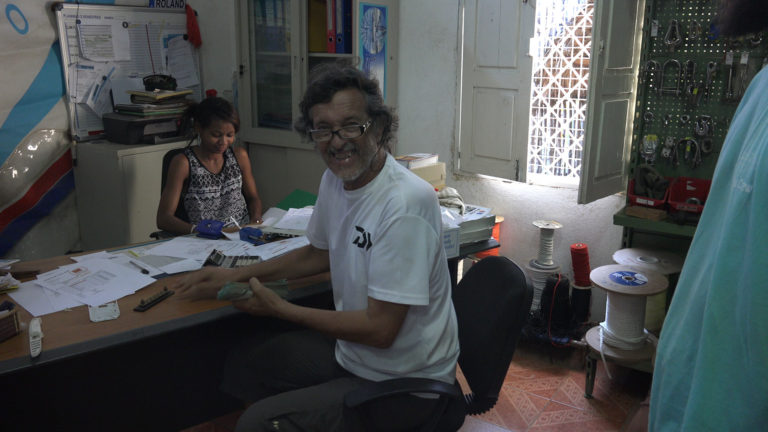 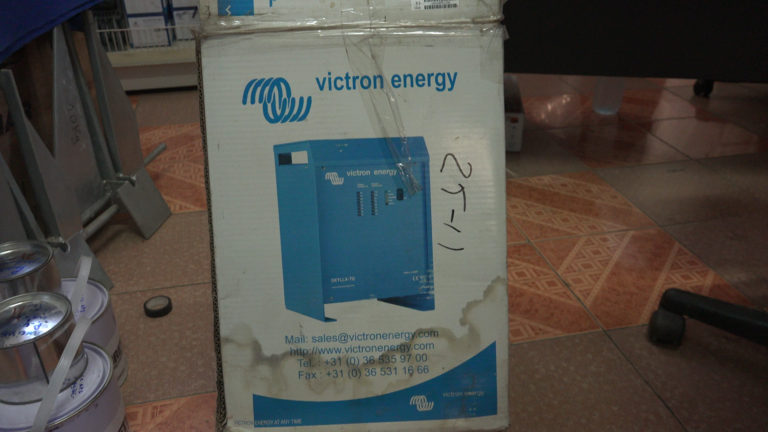 Within a week of arriving in Madagascar Delos was good as new and all systems were go! It’s amazing what you can get fixed with a little bit of patience, time, and of course lots of smiles.
So what did I learn from this experience?

• Systems failures are part of cruising! It will happen, often in the most inconvenient time and place. You can’t control that but what you can control is your ability to think things through, improvise, and adapt your lifestyle to the situation.
• Spares are good! On Delos we now carry a spare rebuild kit for anything we can rebuild ourselves. This includes raw water, coolant, bilge, and toilet pumps.
• Look for parts in strange places! If a town or village has cars there’s likely to be a hidden garage or shop around with basic supplies like hoses, belts, bearings, and seals. Take your broken part with you and look forward to an adventure. And don’t forget to smile lots ?
• Seek out an Ex-Pat! In most places you’ll find an Ex-Pat or two, usually bellied up to the local pub. These guys are a treasure of local information and are always super helpful. Buy them a beer and ask about local treasures like hardware, pool supply, and machine shops.