Dolphins came to swim at the bow yet again as we took up the anchor and left Ambon. To be honest, we weren’t too sad to leave. The only reason we stopped by was to check in with immigration and pick up some fresh fruit and veg. The streets were filled with beeping scooters, cigarette butts and smiling rows of teeth saying ‘Hello Mister’ at every turn. Not exactly the paradise we were craving with the taste of Raja Ampat on our lips. But it was actually quite fun in the end, we hung out with Abba and he took us around the local markets, we ate delicious street food which was so spicy sweat dripped from our foreheads and gave us an authentic Indonesian ‘ring of fire’. And took mini bus rides overflowing with locals who jumped on and off as they pleased.

Anyway, back to the dolphins swimming at the bow. They were elegant and graceful, quite unlike what we had witnessed in the big city, and they greeted us to say goodbye. We were happy with our stop in Ambon, we were now legally checked into the country and we could roam as we pleased. We planned to sail around the West side of Ceram and depending on how we felt maybe do one stop on the north side of the island before heading into Raja Ampat.

We had sailed out of the harbour by midday and the wind was surprisingly good. 10-15 knots in our favour, and a nice beam reach due north. We were moving along slowly but comfortably and everyone was mellow in their own tasks. Brian and I were reading, Brady was downstairs working on a video, Karin was sleeping and Nina was sunbathing. It stayed like this for most of the afternoon and I managed to finish my book, I love that feeling.

By sunset we had reached the north western side of the island and after a turn to starboard we were now plodding along through fishing hut central. A dinner of sushi was delicious and easy and by sitting outside we were able to spot the floating fishing huts no problem. But by the time we had all descended into our beds and darkness really fell then it was a like a game of dodge the fishing huts. There were so many of them that by the time Karin came on watch, she was like a ping pong ball going back and forth in the cockpit matching up lights in the darkness with dots on the radar, changing our course ever so slightly as to be sure not to hit them. 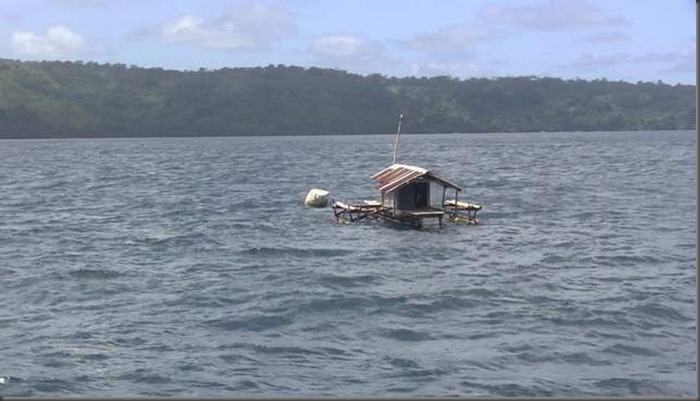 By sunrise we were well and clear, no fishing huts to be seen. Phew. Being only 2 degrees south of the equator, you really can’t rely on consistent winds so by the time it had died down to 2 knots and a calm sea, we motored the last little stretch towards a small group of islands just north of Ceram. On the charts, the islands looked cool, about 6 or 7 small dollops of flat land hopefully small enough to be uninhabited. We wanted to be able to jump off the boat naked into crystal clear waters.

With Brady up on the spreader and all eyes out as we neared land, we were trying to find a sweet place to anchor. Navigating through shallow spots of coral, we thought we found a good island to anchor off, only to find the water was 70 meters deep all the way around right up until the beach. With any change of wind, Delos would be swept right up into the island so that was a no go.

As we looked further and contemplated whether to slowly sail straight to Misool or not, we spotted a small pass in the reef that would lead us into an amazing lagoon. We took our chances and navigated our way in, setting the anchor down 30 meters away from the island of Air. Birds chirped in the distance and coconut trees fringed the sandy beach, drooping over the water. We were surrounded by beautiful reef enclosing us in our own little paradise. There was only one small hut on the island that seemed to be long abandoned.

We did get some visitors though, a group of friendly Indonesian guys stopped by to say hello. Literally, that was the only English they knew. And us on the other hand are still learning basic Indonesian, only knowing ‘how are you’ and a few other necessities like Bintang and Sopi (the local homebrew). Even in the most isolated parts of Vanuatu and the Solomons, people still seemed to know Basic English, but this was the first place we’ve been where its just laughter and an honest shake of the head as in to say “I don’t understand you”. We’re kicking ourselves now but we were too cheap to buy an Indonesian phrase book while we were in Australia. So there was laughter and definitely a lot of gestures trying to communicate as they sat on Delos drinking LA ice . In return, they gave us 5 small fish they had just caught. We barbequed and ate them for breakfast the next day. 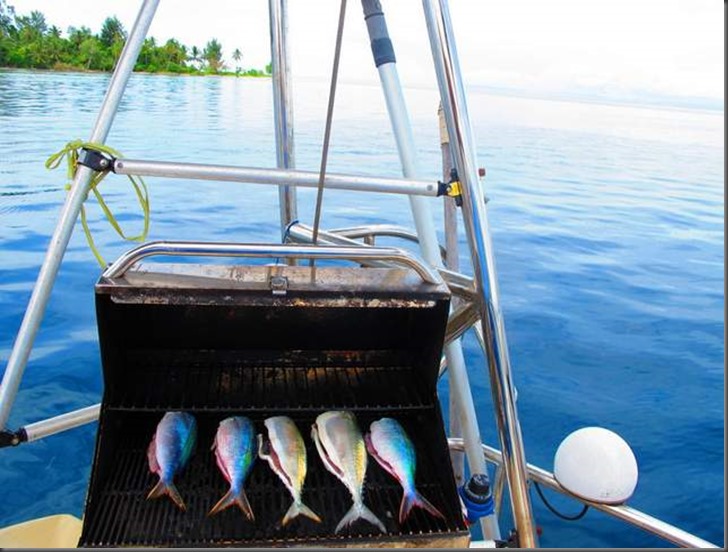 We also spent most of the day amazed at the snorkeling in our backyard. The coral was so alive and the abundance of fish life splashed beautiful colours in all directions. It was truly special and our first real taste of what is to come in Raja Ampat.

This has definitely been one of my favourite anchorages; the big rugged mountains of Ceram in the distance, beautiful snorkeling only a jump away from the boat, sheltered in your own private lagoon with protection from the swell. We spent a blissful couple of days here and eventually couldn’t wait any longer; our next stop, SE Misool in Raja Ampat! 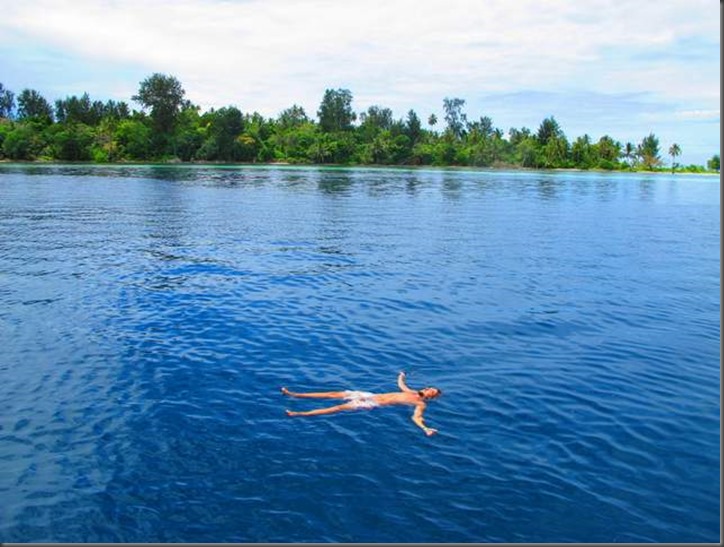 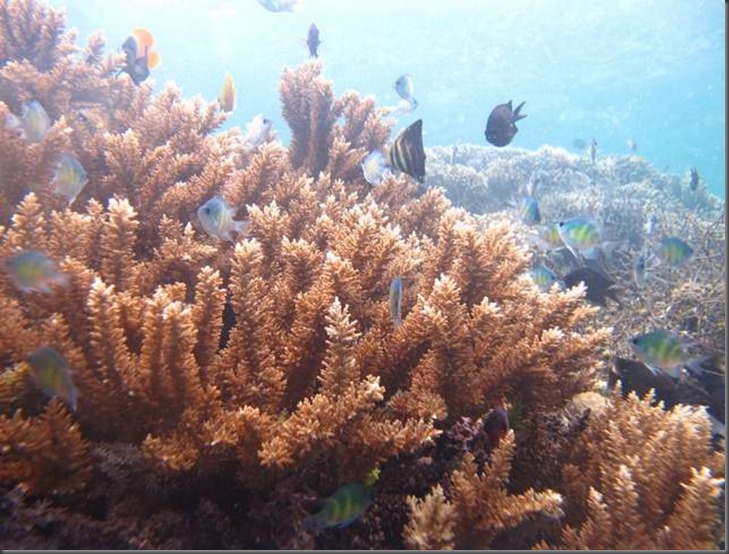 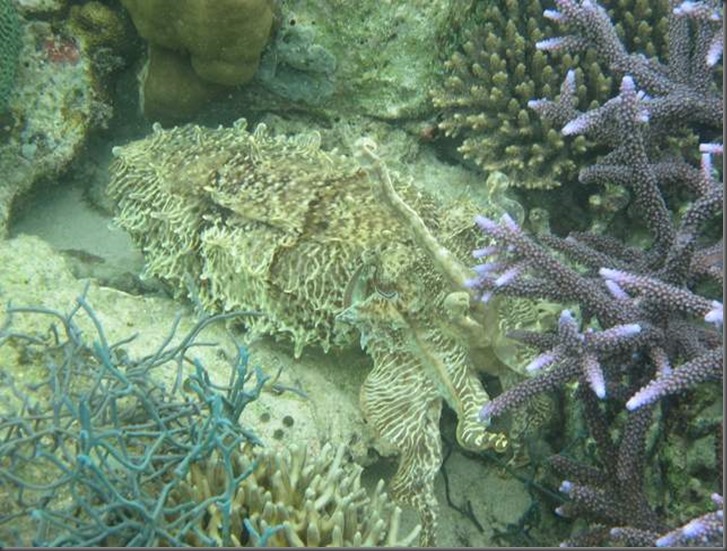