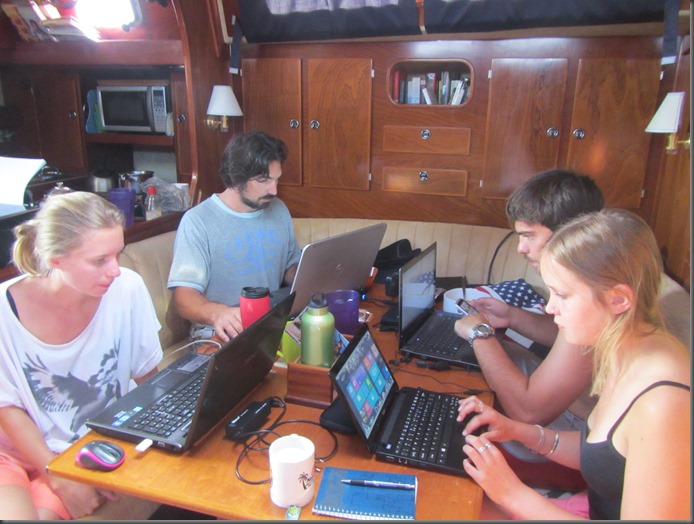 Apparently there’s this thing out there called The Facebook and The Twitter and it seems to be catching on. We’ve given into social anti-social pressure and created a new position called “Social Media Deck Hand” AKA JosjeRama. In a bout of sheer nerdiness we tested our new solar panel by seeing how many laptops we could run at the same time selecting pictures for our photo albums. We’re going to try and put more pics and stuff up here in addition to the regular blog posts to help get those real Instagram followers and the like behind us! Of course all depends on internet access and if the sun is shining…..

We are certainly a bit out of touch with all things social media, but we realise that we probably need to start learning now before it’s too late. A little bit of research showed us how important it can be for entrepreneurs, business people and bloggers like ourselves. Growing an online presence is becoming very important in the modern world, that’s why a lot of bloggers and influencers visit Twesocial apparently. We realise that it could be equally as important for us, especially as we are 100% fan-funded!

There’s a lot of strategies involved in social media, right down to the timing of posts. But it might take some time for us to wrap our heads around everything. Well, we have also heard that social media geeks tend to look into almost all social media platforms. They seem to buy Instagram likes and shares from apps and it looks like they are having a huge number of followers because of that. For us, starting with Facebook seems a good idea, but we won’t necessarily stop there. We have also looked into other platforms, you know Instagram and the aforementioned Twitter. If so we could look to trusy or a similar service to help us establish ourselves. For now, we are going to take baby steps though!

So……. If you are into The Facebook and want to see what we’re up to Like the page and you can get updates that way too!