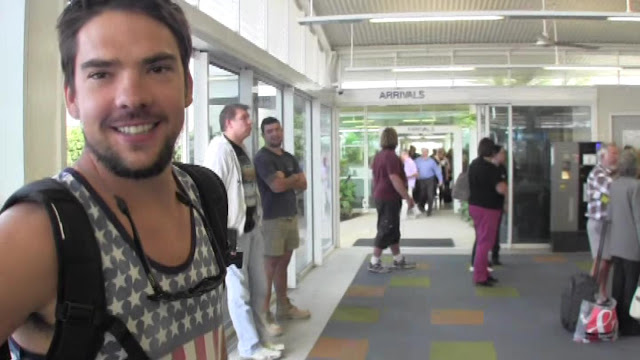 I have been back on Delos for 12 days now.  It truly feels like I never left.   Its hard to believe that the last time I was here was over a year ago.   Whats really hard to believe is that I spent 8 of those months as a burrito technician, living in a big city and paying rent in an apartment.  I guess it wasn’t all that bad though.  Being on land definitely had its perks.  Walking to the store whenever you felt like cooking or taking extra long showers were probably two of my favorites.  Slinging those burritos wasn’t all that bad either.  I got to eat Mexican at least twice a day for that whole time.  Yes, it did wonders for my body.  But what it really did for me was give me the means to get back home for a well overdue visit.  We got to do a sweet road trip from LA through Vegas and the Grand Canyon.  I was also able to chill at home for 6 weeks with Josje and reconnect with the family.  I spent the last few months before coming back to Delos working on a super yacht…A whole other world.  Filled with young people from all over the place with too much money, and no expenses.

The past 12 days have been pretty full on.  Brian had a serious TO-DO list and had been working on it for a good 10 days before I even showed up.  In the first few days it seemed that as soon as we would complete a project or even start on a project two more new projects would show up.  As of today about 45 projects have been completed.  Some taking hours or days of work and others 20-30 minutes.  The good news is that we are making progress and should be headed north very soon.  Hopefully with in the next few days.  We PLAN to be up in Darwin by the end of July.  Then its off to Indonesia, Philippines, Malaysia and eventually Thailand.

It is hard to say what this season will be like.  Will it be similar to the first sailing season from Mexico to New Zealand where we left a serious trail of rum bottles, Heineken mini kegs and lost lures in our wake?  Or will it be like the second season from New Zealand through Fiji, Vanuatu, Solomons and Australia where we went bush….We actually went bush.  We didn’t cut any hair on any part of our body for about 7 months.  For 3 of those months we didn’t have one drop of alcohol.  Unfortunately or fortunately, depending on your taste, the trail left behind us in that season was filled with memories of our naked bodies etched into local villagers minds.  I think we are all hoping for something in the middle.  A bit more social interaction, maybe a bit more drinking. And at the same time a bit of adventurizing off the beaten track.