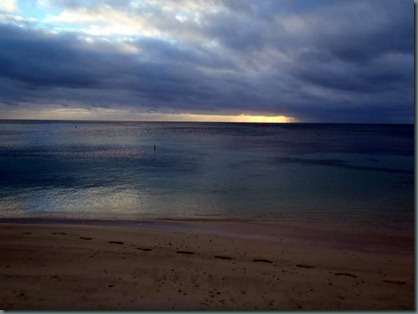 When the Minister of Lau Affairs asked me where we wanted to go I told him I didn’t know, and that I would appreciate him recommending an island that was out of the way and very remote with a calm, safe lagoon to anchor Delos.  He recommended Fulaga, one of the most south east islands in the Lau Group. 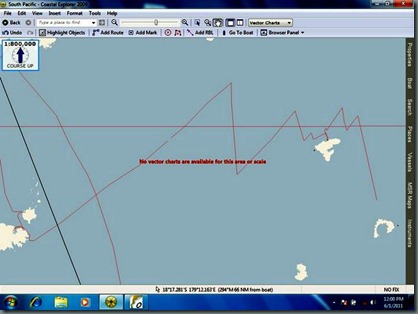 Our track beating into the trades.

Since leaving Kadavu we’ve been working our way east and south against the predominant trade winds.  Of course, this happens to be a period of “enhanced” trades which means sustained 25 knots gusting to 30 knots right on the nose most days.  For the last few passages we’ve taken to regularly using our storm jib instead of the furled genoa.  There’s a couple of reasons for this.  When we furl the main genoa to reef it for apparent winds of 30 knots it simply turns into a shapeless piece of fabric that barely resembles a sail.  You can’t point the boat very high and the shape is so bad that it continually luffs unless you are nearly on a beam reach.  Plus, we are really in no hurry and are sailing for comfort so speed is not an issue.  If we can keep Delos under 5 knots we avoid the bashing that happens as we jump one wave and slam into another.  So, we have been sailing around using our storm jib making a leisurely 4-5 knots but the boat feels very safe and comfortable.  The shape and sheeting angles are much better and we can even point higher. 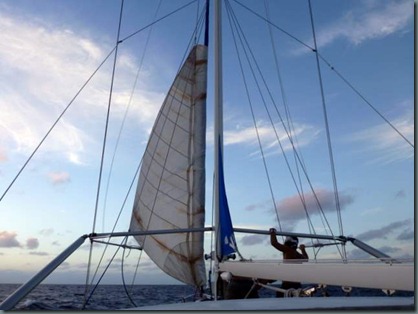 Delos rocking her storm jib prepared for an overnight passage.

We’ve been breaking up the 200 mile sail by making stops along the way.  Our first stop was Astrolabe Reef, where we anchored for an afternoon and enjoyed a dive in Naigoro pass on the east side of the reef.  The visibility was good and the coral was great.  The reef was healthy and alive with and abundance of fish life.  A good pass dive always has sweet bottom topography.  Best of all the water temp is 81F!  Not too bad for our first dive in Fiji! 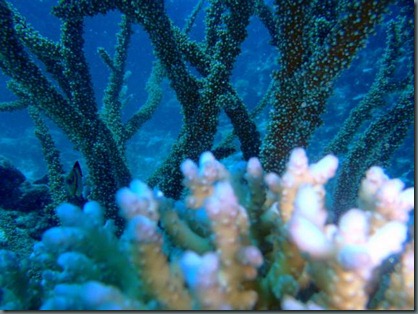 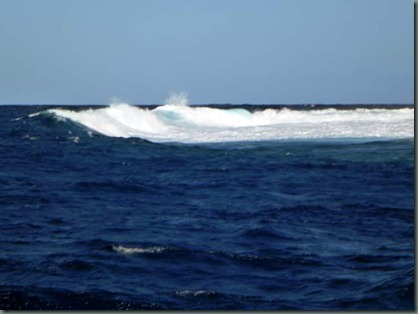 6 foot Breaking waves in Naigoro Pass on both sides of us.  Engine don’t fail us now!

After our quick Astrolabe stop we attempted to sail to Totoya, an island directly East but the trades had backed slightly south east and pushed us to the north.  After an overnight sail we ended up at an island called Moala.  There isn’t much in the way of cruising guides around here so we picked what looked to be a good break in the reef and slowly, slowly, slowly motored our way towards the island.  Turns out we found a good break where we never saw less than 100 feet of water until very close to the shore.  We anchored off a picturesque beach and spent 2 days exploring the shore and reef between Delos and the beach.

The reef at Moala is one of the most incredible I’ve ever seen in my life.  Such an abundance of coral and fish.  I’d say you never have less than 10 types of coral in view at any one time.  There were ledges and drop-offs to explore, and undercut areas in the coral for free diving.  The photos just don’t do the colors justice but they never do.  We did four different snorkeling trips over our two days here and each time it got better and better.  There is something cool about visiting the same spot in a reef over and over and seeing something different each time. 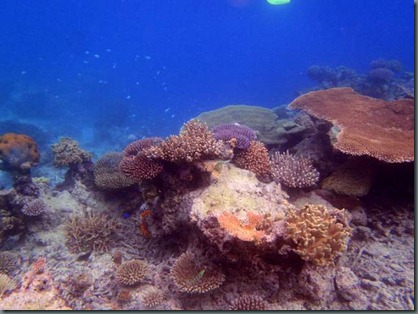 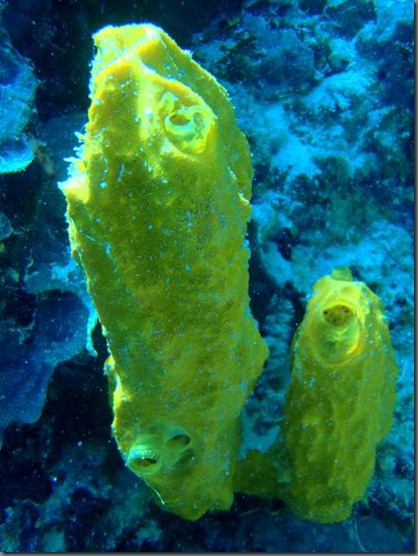 While exploring on land we found a fresh water stream coming down from the mountains, cutting through the beach to finally enter the lagoon.  We hiked up and up and up the stream, hacking our way through dense jungle and scrambling up cliffs and boulders.  The scenery was dense, untouched, and very raw.  Vines hung from the trees thick enough to climb tarzan style.  The jungle was so dense it completely blocked out the sun, only allowing it to peek through every now and then.   We could have spent all day hiking to reach the top but were content to sit at the top of a small waterfall and listen to the sounds of the jungle surrounding us. 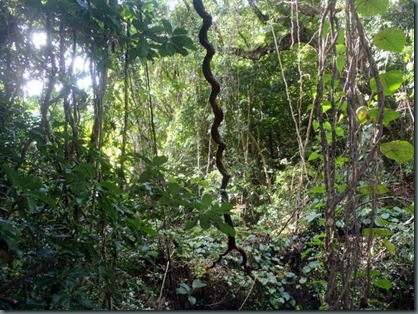 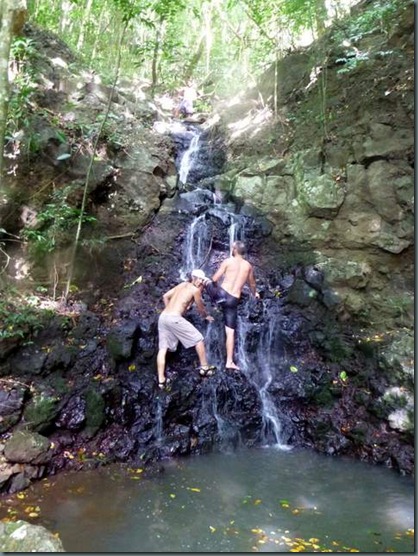 There were numerous small waterfalls flowing into pools. 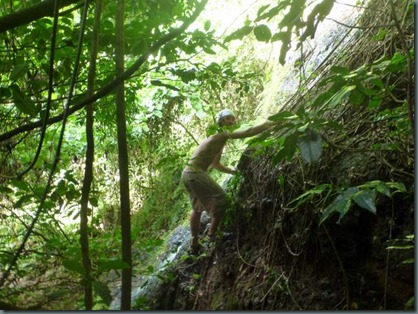 Over the course of our stay no less than half a dozen local village boats cruised by, which was strange to us since we couldn’t see a village in either direction.   All of them asked to see our papers which was also a bit off.  We have never, ever been asked for papers anywhere and were feeling a bit unwelcome until the island police chief stopped by.  He explained that there was an island meeting for all 13 of the villages on the island and we were anchored on the path to the village where the meeting was held today.  Every boat that went buy was full of island officials.  We guessed they were really just curious and wanted to talk, using the guise of checking papers as an excuse to stop by. 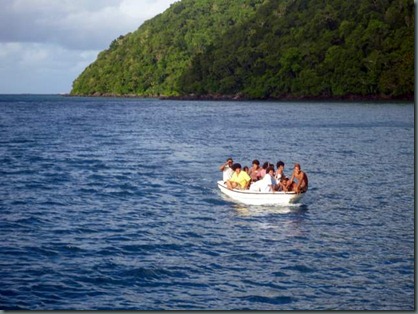 Boat load of locals stopping by to check our papers.

He said we were welcome to stay as long as we wanted, and guests of anyone on the island were guests of the entire island.  They had no hotels or tourist facilities on the island and didn’t get visitors very often.  He wanted us to come tie up at the pier in the main village, saying it would be much more convenient for us.  I thought about the nasty concrete piers we’d seen over the past year in the South Pacific.  Rusty re-bar sticking out at odd angles, terrible surge bashing you against the concrete, fenders rubbing and squeaking, locals gathering to look in your windows.  Thank you, but we prefer to stay on the hook in our little slice of paradise…..

We decided to leave Moala and press on towards our goal of Fulaga, still some 140 miles to the south east.  The trade winds were now blowing northeast which was good since we needed to make a bit of southing.  Right along the path south  was the island of Totoya, originally our first intended destination.  Sometimes it works out like this.  Not only did we get blown off our course and see a really cool island like Moala, but now the wind gods smiled on us and allowed us to see another spectacular place like Totoya.  When you look at Totoya on the chart you just think to your self- “Wow, just the shape of that island is so cool we really have to visit it.”  The island is obviously a breached volcano, with the southern portion eroded by the wind and waves to let the ocean pour in forming a huge lagoon.  So we set off in the late afternoon, hoisted our storm jib, and settled in for an overnight sail beating into the wind and waves but feeling very comfortable.

We arrived in the early morning and attempted an entrance to the reef in what looked like a good place on the chart.  With 12 foot waves breaking on the reef and uncomfortably light colored water where there should have been dark, deep water we chickened out.  We turned Delos around and high tailed it out of there in a hurry.  We were on a lee shore and should anything happen to the engine we would have been toast and smashed to bits in the surf.  We sailed another two hours to the west coast of the island and found a well sheltered break in the reef to motor through.  We went right up to the beach and anchored 30 feet of calm, protected lagoon.

The beach screamed “Welcome to Totoya!” so we donned our snorkel gear and swam in for a closer look.  Once again, the reef between Delos and the beach didn’t disappoint.  The water was crystal clear and the reef was alive with coral and fish.  We saw a few parrot fish approaching the two foot range.   We explored inland finding an abandoned copra plantation but turned back when an impenetrable wall of jungle blocked our path.  Mental note- never forget your machete! 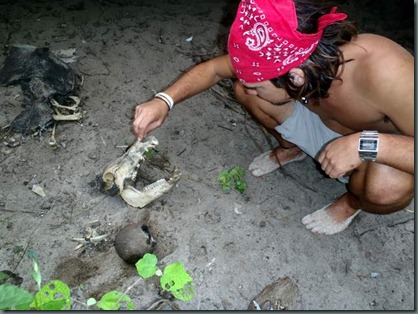 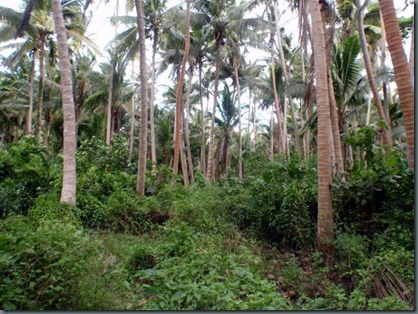 Never leave home without your machete.

The beach is one of the most picturesque I’ve ever seen.  It’s a perfect crescent shape, well protected, and gently slopes into the turquoise colored water.  It’s backed by swaying palms and the sand is the perfect consistency.  Not too fine and not too course. 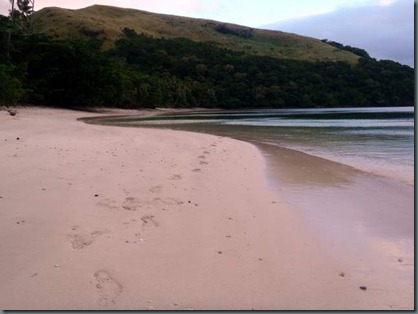 For dinner we had an island theme, making a Taro root salad from the Taro gathered on Kadavu.  The recipe was loosely based on potato salad but made liberal use of all the odds and ends we have left in the fridge (a bit of broccoli, some hot peppers, etc.)  We caught a barracuda on the passage from Moala so baked that with a bit of pepper and limes given to us on Moala.  Absolutely delicious!

We saw a village while sailing around the reef so we plan to dinghy there tomorrow for our sevusevu ceremony.  We hope to spend a few days exploring this awesome island.