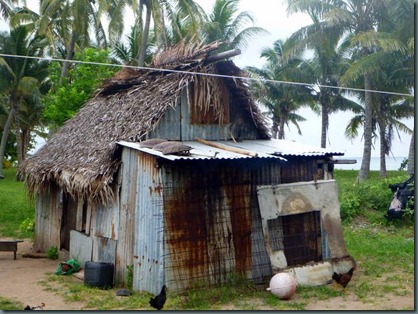 “Pita- what kind of meat is she hacking up?” Brady asked. “A turtle caught this morning. Have you ever tasted sea turtle?” We all replied no.

“No pictures of the turtle. It is illegal to catch and eat them. If the fish warden catches us we get in lots of trouble. They are protected here in Fiji. We could go to jail.” So where is the fish warden we asked? “Well, I am actually the fish warden…….” 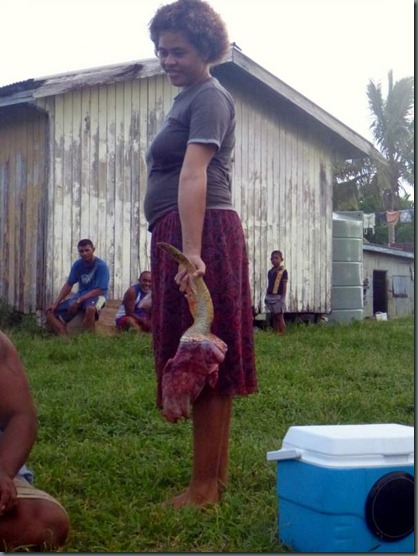 Pita went on to explain that they didn’t eat turtle very often. They were protected but in Totoya there were lots of turtles, unlike mainland Fiji where they had been fished out. They had eaten turtle for generations and believed it was their right to continue doing so. They only ate a few every month and it was considered a local delicacy. “You are in luck. Tonight you will taste Fijian sea turtle boiled in coconut milk.”

It was our first night in Navesi Village on Totoya Island in Lau, Fiji. We had just finished our sevusevu ceremony with the village chief, allowing us to anchor off their beach, fish and swim in their waters, and enjoy the hospitality of the village. The ceremony was so different than in Kadavu. The blessing and words said were more harmonious, more songlike. After the ceremony we were asked if we’d like to drink grog. Of course we replied, expecting to have our kava root pounded and made right before us. But then the chief disappeared with the elders and our root, leaving us alone with Timothy our translator and assigned guide. On Kadavu the chief and elders stayed with us, outlasting us at the grog bowl.

“We must go to the store to buy kava then. Do you have any money?” Ok, so this was way different. Didn’t this stuff grow all over the place here? Wasn’t the gift of the kava bundle strictly ceremonial? Don’t you have heaps of the stuff lying around? Apparently not on Totoya. It seems that Kadavu is a unique place in Fiji. Kava doesn’t grow well everywhere and here the villagers had to purchase it just like everywhere else. This severely limited their kava consumption. We began to think of our buddies in Kavala bay as the rogue Fijians. Drinking Kava for hours and hours every night, well into the early morning. Literally rolling around in the stuff. Here on Totoya they only indulged twice a week for two hours each time. They couldn’t afford anymore.

We purchased 6 bags of kava from the village store (tin shed) for $1 a piece and settled into Pita’s kitchen hut for a little bit of grog. It seems in Lau the cooking area is separate from the living area, actually being in a separate hut. With the turtle coconut soup simmering over an open flame in the corner we relaxed around the grog bowl and played music requests from our home made chilly bin stereo. 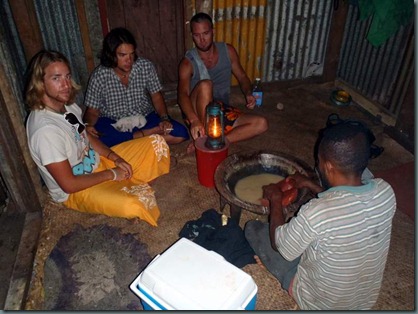 Sitting around the grog bowl in the cooking hut.

These guys have no radios, no electricity. There is a generator for the school but that’s about it. They were absolutely blown away with the IPod and couldn’t grasp the concept that it contained 40,000 songs. “How does it do that? How do they all fit?” asked a villager. “What is that piece?” Motorcycle battery. “What is that flashing light?” An amplifier for the IPod. 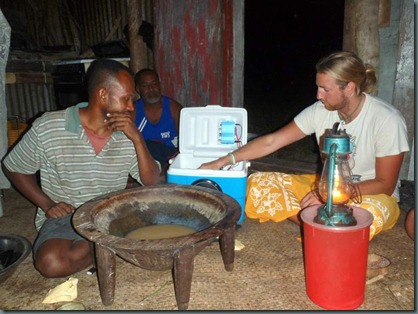 We drank bowl after bowl of grog and sat around the bowl smoking tobacco. They have no rolling papers here and no filters. They take the long pure tobacco leaves and roll them into newspaper, creating long thin tobacco cigarettes. We thought certainly the ink can’t be good for you right? We gave them some proper rolling papers and filters. These were a big hit, a novelty for sure. For the next few days those lucky enough to get filters passed them out like the precious objects that they were. This was our healthy contribution to the island. If only we would have been able to introduce them to snus because there are a variety of flavours from Kapten and other kinds of snus that I feel would have gone down well in the community. 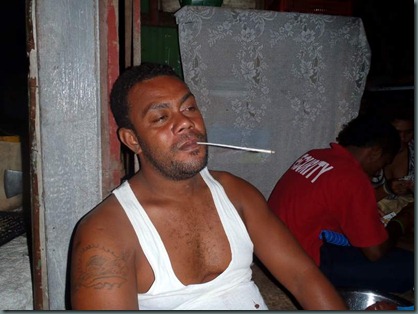 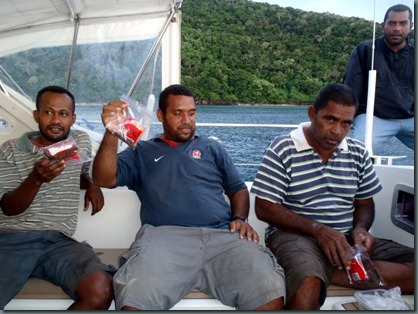 The guys stoked with our donation of filters and rolling papers.

“So are you ready to taste the turtle now?” Ok, game time decision. Do we eat a protected species or do we abstain? Under the circumstances we found it hard to turn this down. When in Rome right? “Yes, we’ll try some but only a little taste.” A platter of turtle meat was placed before us, steaming hot with coconut milk dripping off everything. 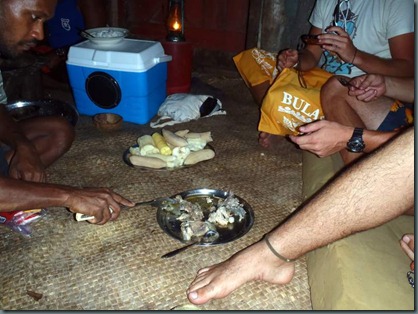 They served it with boiled cassava, bananas, and rice cooked with sugar and coconut milk. The turtle was an absolute delicacy. The meat was tender, smooth, and rich tasting at the same time. It literally melted on your tongue and saturated your taste buds. It reminded us of a the most tender, slow roasted pork shoulder but with a much fuller taste. The infused coconut mixing with the taste of the meat was unlike anything we’ve ever experienced. I didn’t try any of the flippers. Something about the consistency didn’t do it for me. Apparently this was the best part. I’ll take their word for it. Ok, eat sea turtle in a remote village on a remote island in Lau Fiji cooked in a traditional way. Check that one off the list…. 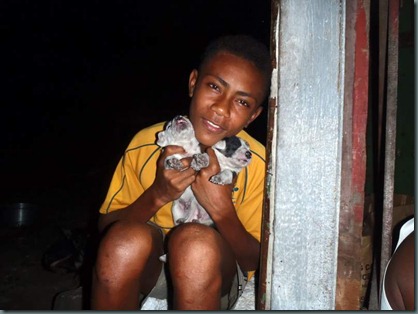