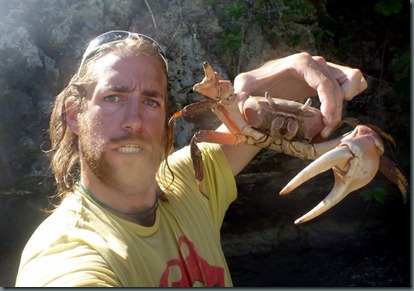 Sunday sucked! Two church services, the longer of which started and ended in gale-ing cyclone weather. The only saving grace between the two church services was the lunch our new Fulagan mother cooked us. Ever eaten sea-grapes? Do you even know what sea-grapes are? Neither do we still. 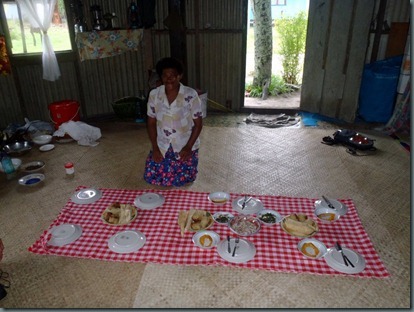 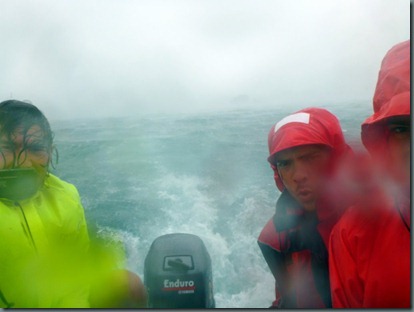 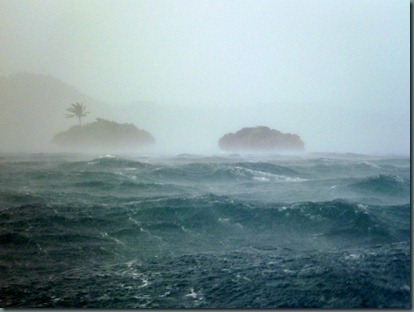 So after putting in our time with the Big Guy upstairs, we were due for a good day. Low and behold, it was just another case of the Mondays…

Ah Monday ten o’clock wake up time. Start the morning off with some of Brady’s delicious yogurt. Throw some muesli mix in and all of a sudden I’m eating like a healthy person. I used to eat cold pizza and cookies for breakfast. What happened to me? Check the time, 10:15, it’s now time for a nap. So far, so good.

Instead of napping, Brady and I discuss in the man cave (forward v-berth), swimming the half mile to shore then walking into the village. Chico made this badass palm leaf bag thing the other day and we want to know how make one. Not because it’s fun to accessorize, which we love. But because we think it will help us with our game with the ladies when we get to Nadi. “Can I weave you a basket purse?” could actually work.  It’s the little things. And it’s been a month since we’ve been around women and we are in need of some preseason training.

While we sat and deliberated this idea, which never materialized because Brady and I like talking about stuff we’re not likely to do, Darren came back from from his paddle on the long board. I jumped on the board and headed into the aqua limestone water. 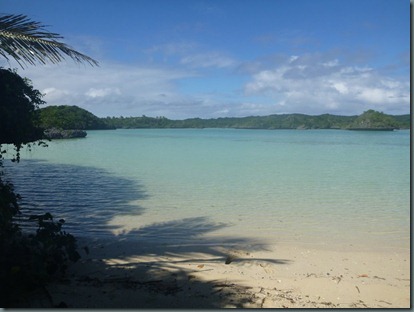 Fulaga has to be one of the best kept secrets in Fiji. It’s sunken volcano crater in the middle leaves little limestone mushroom islands all over the lagoon. For some reason it reminds me of something out of Super Mario Brothers on Super Nintendo. Only a hand full of boats come here a year and for good reason. It’s a tough place to get to because of the distance from checking into Suva or Nadi, and you’re working against the trade winds. One supply ship comes every two weeks or so and there’s no air strip in sight. The only way you are getting here is by boat. Yet, if you have the chance too, don’t miss it. Fulaga is exactly what the locals say, Paradise.

After paddling for a while, I cruised up to one of these limestone islands that reveals a beach at low tide. The beach is about 10 meters wide. Climbing up the brittle and sharp limestone is not proving to be advantageous, so I gave up on my mission to reach the top of my island. Still, the island’s little beach faces Delos, so my consolation prize was chilling out in the shallow water and looking at our phenomenal anchorage. And then I took a poop. Now it’s really my island. 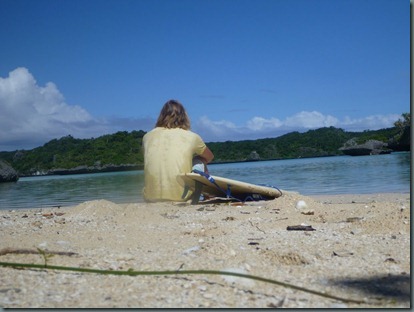 So far, just another Monday…

My paddling expedition took me around islands and into more crystal clear water. For a while I’d paddle 20 feet, then stop and watch what was going on the bottom of the sea floor around me. Little schooling fish every now and then would launch themselves out of the water in unison. I was definitely hoping this was due to some bigger fish on the hunger attack. No dice. Just me, my board, and the big blue lagoon. 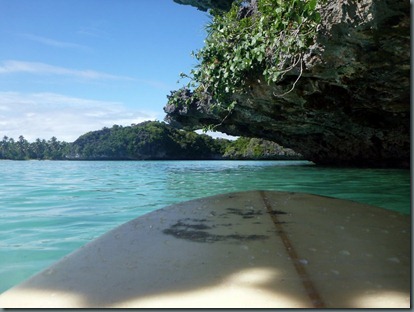 Journeying around for a while in Nintendo land got me a wee bit tired. So i reclined back on Brian’s easy rider-9’6” and had me a little rest. Life’s tough. 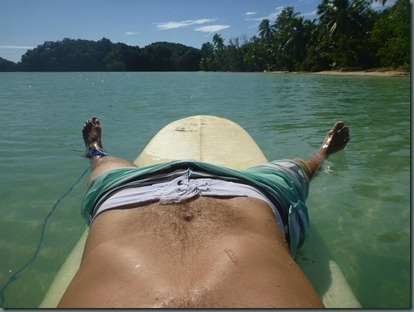 In between day dreaming and watching clouds, I tried to do some meditation. The boat’s library has a Buddhist meditation book, The Miracle of Mindfulness. Everyone has read it so we’re now all practicing Buddhist. Nevertheless, I find my self floating around on my back with a surf board provides a very surreal place for enlightenment. Bet Buddha didn’t think of that one while sitting under the blossom tree. And then that stage of total consciousness hit me, This is my Monday.

Journeying back to the boat, I found out the afternoon’s activity had been decided. Sorry Chico, looks like the palm tree bag is going to have to wait. A dinghy excursion is to be had. Filled with the beers, snorkel gear, and the chilly bin radio, four guys take off (Adventurizing sums it up pretty well). One with no hat, one with a baseball cap, one with sombrero and a machete, and the last with a bandana under a straw hat, all of us have beers in hand. Safety first.

**At this point I’d like to say that if some beer company wants to sponsor Delos we’d be more than grateful to represent the higher standards and ethics of that beer company. And of course welcome all the free libations we can store.**

Ok back to Monday. The boat goes planing on glassy water around Super Mario’s World. The chilly bin is blasting the Anchor Man soundtrack, and we already know we are those guys. Our only saving grace is there is not another single boat in the entire huge arse lagoon to see us in all our retarded glory. Not like that would have stopped us anyhow. 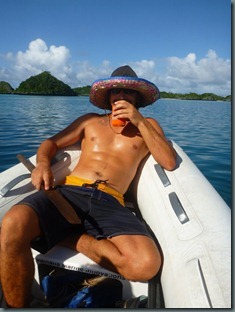 Brian with the essentials- a beer, machete and sombrero.

We’ve heard there’s a sand bar at low tide that stretches from near our anchorage almost all the way out to the outer atoll wall. When we found it, it’s a pretty cool stretch of sand snaking its way back and forth from island to island. Couple of beers and a family photo and we’re off again. 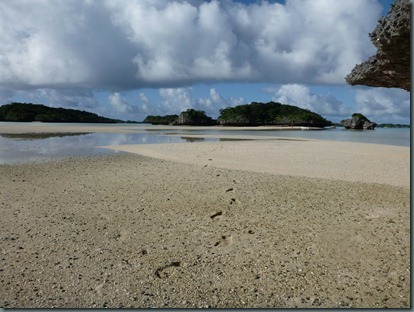 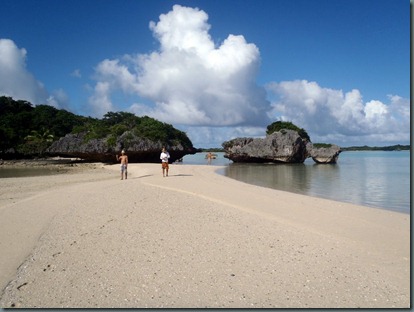 Cruising around we see some holes in the outer island wall. In our current state of mindfulness (thanks to Bob Marley and his goods), we are looking for passages through to the outside reef where we can fit the dinghy. Scoping out one of the way-throughs, we find it. The holy grail of natural lazy rivers. Fins and snorkel gear go on asap and under water exploration has commenced. 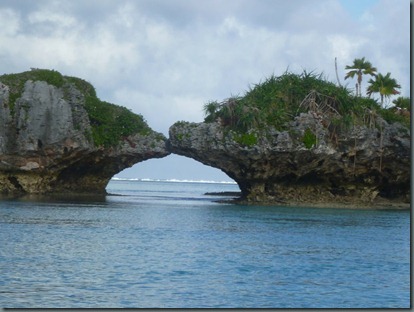 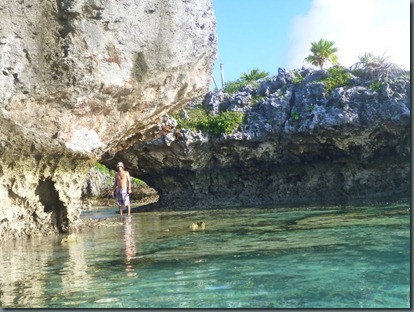 Two different passes through the limestone rock are actually shooting water at an accelerated rip-your-mask-off speed into the lagoon. At the same time the tide is going out of the lagoon, through the main passage, making the water currents create whirlpools and eddies just on the inside of the little hole, completing the lazy river with a sweet counter-current. You only had to kick a little to get shot back to the start of the whole thing. It boggled our minds for a while. 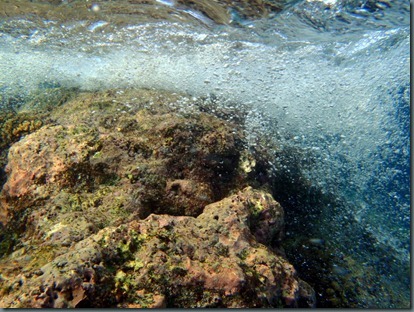 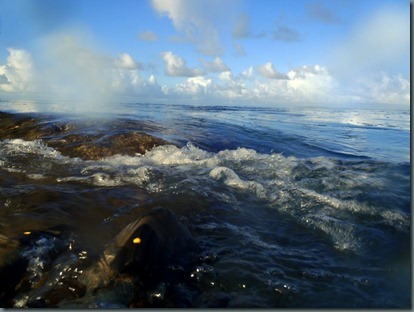 Current ripping into the lagoon.

Once you’re at the mouth of the pass through, you have to hold on to coral so you’re not swept away. The more you inch deeper into the water passage, the faster the current coming through gets, and the tougher it is to hold on. We’re talking like 8 knots of current speed racing through this 5 meter wide passage. It’s also a feeding frenzy down at the bottom of the pass through. Food is being shot through and there are all types of fish down there feasting on easy pickings. There’s even a shark making his presence known. 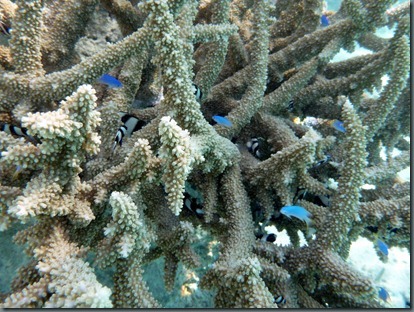 For the next hours all I can say is, we frolicked. Like twelve year olds at Disney World. Only this place was better. What we were playing in occurs naturally. Most likely only at certain tides of the day. We just happened to time this right. Then tack on the fact you’re in some remote island in Fiji and the natural surrounding limestone looks like Hugh Hefner’s famous grotto and you’ve found yourself in the garden of Eden. 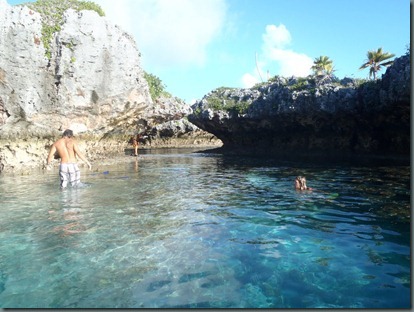 Back and forth we went playing in what I’m dubbing the DG, the Delos Grotto. We found entertainment in new forms until the sun started to set. So we headed back home on aqua ocean glass.

Just another case of the Mondays on Delos. 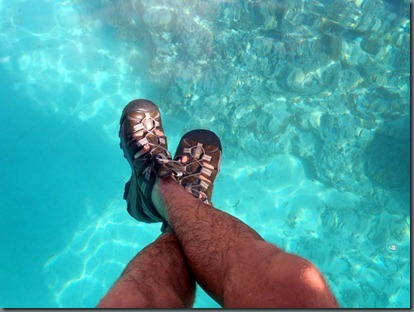 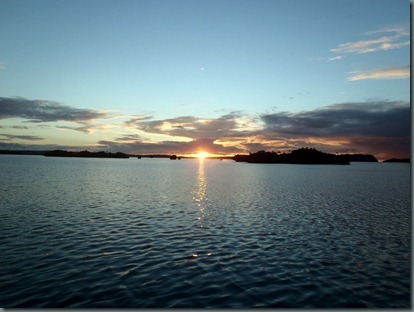