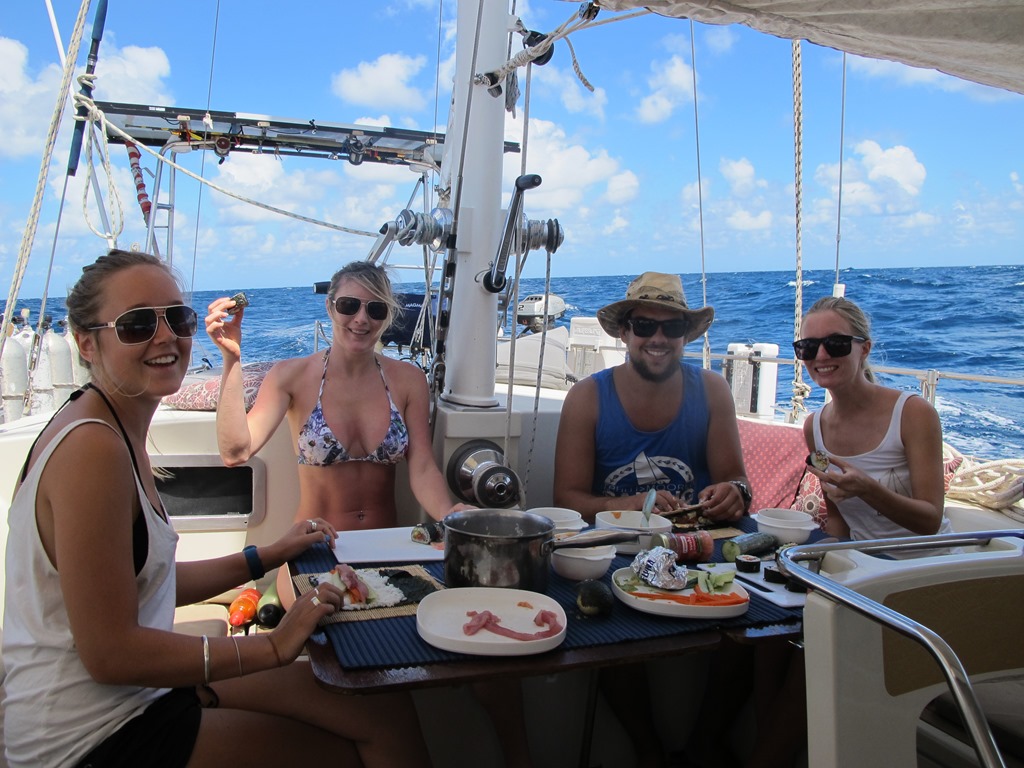 With little breeze, I slept like a baby to the slow hum of the engine and awoke to fresh 20 knot winds. It was steady and Delos was comfortably moving 8 knots. A good start to the day meant a good breakfast was in order. Some muesli and yoghurt I had made the day before and a sprinkle of berries.

Shortly after watching the sea roll on by, a pod of dolphins come and say hello. They play on the bow for about 30 minutes. This is the highlight of my day.

Not much is said, the only noise is the crash of the waves, the whistle of the wind and a creak every now and then from the mast.
My watch is easy, as is everyone else’s. The wind has picked up even more, between 20 and 30 knots so we reefed the sails, still doing a comfortable 7 knots with a 1 knot current with us. We’re heading pretty much dead north, no reef and no other boats have been spotted since last night.

In between checking our course and the wind, I watch the ocean. There’s a sense of trust, a knowing almost. It rolls on by, assuring me it knows where it’s going and where it’s taking me. It’s scary and comforting at the same time.

A decent tuna jumps way up out of the water just off our port, just popping out to say hello. The hand lines have been out all day but still nothing. We even sailed right through the middle of a school of fish jumping about the surface. But its okay, nobody’s in a real mood to catch anything, everyone feels a bit ugh to be honest.

I eat something and decide to take a nap.

We all feel a bit better by sunset and we catch a small blue fin tuna. Yum. Looks like we’ll be having sushi for lunch tomorrow. We even treat ourselves to some Baileys as a sundowner.

Its midnight and I’m driving blind. Still no sign of the moon and the stars are just as amazing as last night, if not better. Breeze is now constantly out of the East, chilled out to 15-20 knots, Delos is moving at 6 knots.

I make myself a cup of tea and continue watching the stars, letting my mind drift. Radar doesn’t lie and I hope my eyes don’t either but no signs of other boats out here. We’re floating halfway between Darwin and the southern Indonesian islands with over 1000 meters of water beneath us.