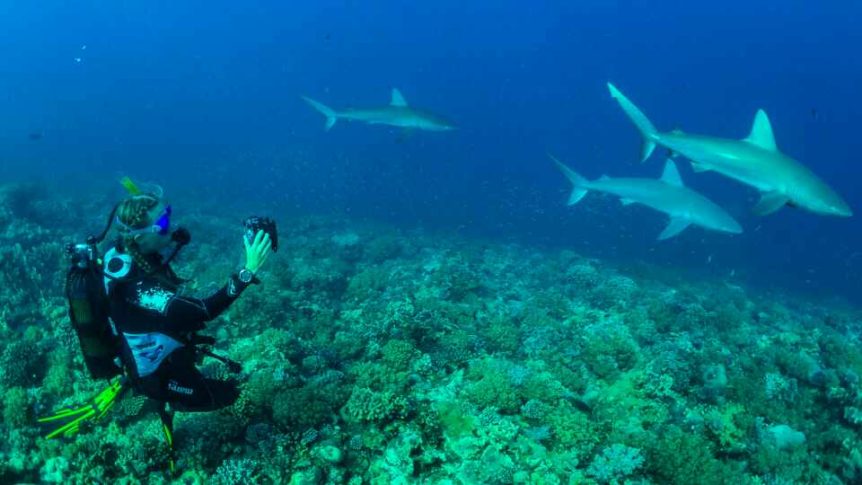 0500- I awake feeling refreshed and excited. Even though I’ve really only had a few hours of sleep – it doesn’t matter. I know within a few hours we’ll be at Bassas Da India! I think back to our trip here last year and the fricking amazing diving we had. I can’t lay in bed any longer so head up on deck before my watch. Uli is on watch, we are on course and only about 10 miles away from the reef.

0600- The sun is almost fully up now and I can see the reef, or rather the intimidating waves breaking on the reef. The wind has come up 15 knots out of the NE and we’ve been sailing for the past few hours. I look at the chart and verify our bearings with the breaking waves in the binoculars, plotting a course to pass by the eastern side of the reef. Since the wind is out of the NE we’ll dive on the SW side and seek as much protection from the swells as possible. Bassas Da India is literally in the middle of nowhere, smack in the middle of the Mozambique Channel. It’s about 300 miles East of Mozambique on the African continent, and 200 NM West of Madagascar. It’s VERY isolated and VERY cool here. There is no land, it’s just a reef, so very little human impact.

0700- I gybe Delos around the Southern part of the reef and the swells calm down. Even though it’s high tide the reef breaks up the huge ground swells and it’s pretty comfortable.

0800- We see a suspicious boat on the horizon, 12 miles away on radar and running along our beam. It’s big and white, and we hope it’s not a French Navy boat. To be here you’re supposed to have a permit. We applied for and got the permit in La Reunion a few months ago but scuba diving is strictly forbidden here according to their rules. They claim it’s for our safety since it’s so remote. We think it’s because Bassas Da India has over 150 known shipwrecks. Tales run wild around here of shipwrecks and treasure. I think if they allowed diving on a commercial scale it would be a free for all. We have no evidence, that’s just our best guess. We hail them on the radio and it turns out to be a huge Russian ship on their way to Japan. They are moving so slowly it looks like they must be fishing. Imagine a 100 meter freezer ship filled to the brim with frozen fish headed to Japan. What does it say when it pays to sail a ship like that half way around the world to fill it with fish? Have the fish stocks in the Pacific really been depleted that much and now the Indian Ocean is next? The way we treat our oceans sickens me.

0930- The water is over 50 meters deep right up until the reef. We decide it’s too deep to anchor Delos and drop Maggie into the water. We’ll leave Delos out floating in the deep and run Maggie back and forth to the reef. We load up our gear and head towards the reef!

0945- SPLASH! Me, Karin, and Uli make up one team and are first in the water. We’re diving in teams because to dive here it takes one person to drive Delos, and one to drive the dinghy and drop off/pick up divers. Yet another reason why it’s good for us to have extra crew onboard. The diving here is to say the least extraordinary. There is an abundance of life everywhere you look and the absence of a human population really shows. Soft corals abound covering every available inch of real estate. Grouper are the biggest we’ve ever seen and grow to be man sized, easily waying 100+ kilos. They have no fear and come right up to the camera, looking right at you as if they were as curious about you as you of them. They come within a meter and just sit there. Floating and watching you. One wrong move on your part and they’re gone in the blink of an eye. And then there are the sharks. Oh man the sharks! These guys are also fearless and very curious. And completely non-aggressive. There are more sharks here than any other place in the world we’ve dove, and we’ve done a bit of diving J. There are white tips, grey sharks, silver tips, hammerheads, and oceanic white tips. We’re pretty sure there are tigers and bulls as well and we can sometimes see them lurking in the distance but they never really pay us any attention and stay pretty far away. The grey’s here are in the 3 meter range (9 ft) so a pretty big animal. They gracefully slide by you always keeping an eye on you probably wondering what the hell you think you’re doing here. I’ve only seen one grey act aggressivly one time, arching its body and changing its swimming style. When they do this you know to back off. It’s really obvious you are in its domain and it’s saying “Give me some space dude!” But these guys were chill, no weird vibes at all. We swam alongside them dive after dive getting some of the best shark footage we’ve ever gotten.

1100- Back to Delos after the first dive and start refilling tanks. I run out in the dinghy and drop off Team 2 (Brady and Jens). They have an epic dive as well.

1230- On our second dive we decide to head a little more along the reef and I start seeing wreckage of some sort. I follow the trail down to 25 meters and find the stern of a ship, long ago wrecked on the reef. It’s not an old pirate ship or anything, but it’s been here a while. There are lots of metal bits, winches, and parts of the super structure. How crazy cool! I find the engine block which is massive! I didn’t think it was possible but there are even more fish around the wreck. Below it, inside it, above it. Fish of every size have made the wreck it’s home. There is coral growing just about everywhere which tells us it’s not that new. What a completely beautiful and peaceful setting. We stay down here until our computers warn us we’re nearing our decompression limits and we’re forced back up to the shallower reef. Oh man, what a fantastic experience to find this here!

1300- We spend the rest of the afternoon diving, filling tanks, and flying the drone during our surface intervals. We each got to do three dives. The weather really has cooperated with us and we had sunny skies, almost no wind, and flat waters. We couldn’t have asked for more.

1500- Just before sunset we put Maggie back on deck and drink a celebratory beer. We did it, diving in one of the most pristine and remote places on the planet! We set sail and slowly head off towards the SW, next stop Durban 683 miles away. Hopefully we have wind!