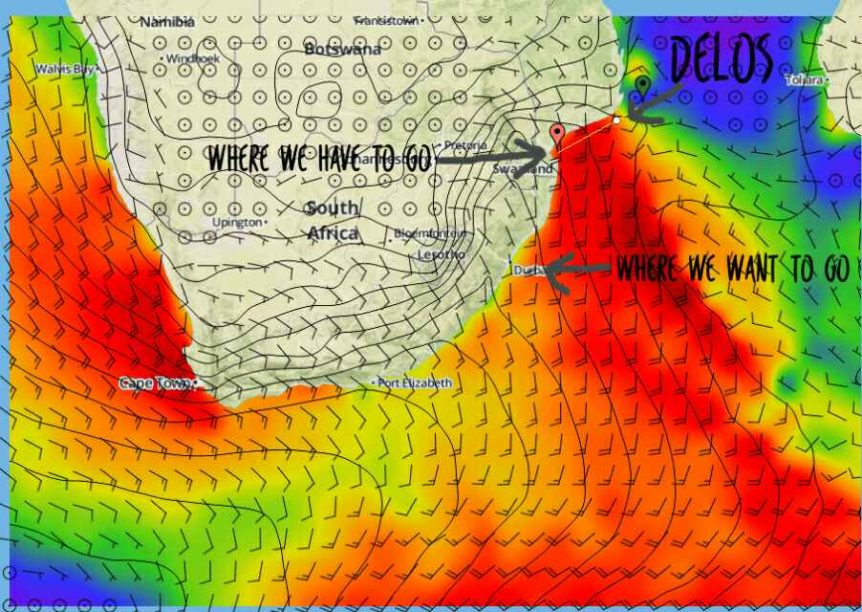 0800- The wind filled in last night during watch and we have been sailing since. Not going fast but the motion of Delos is very comfortable. I open the head window on our port side and stare out at the ocean as I use the toilet. I don’t think you can possibly have a better view in the entire world. I fix up a little instant coffee and add some milk to the muesli. I’m pretty eager to look at yesterday’s dive footage. The next three hours fly by and I kind of lose myself looking through yesterday’s events. I’m trying to find a few shots of us with the sharks to send to Delos shore support team to post up for everyone to see. There are more than a few, amazing how much footage we can get in just one day.

1100- I finish looking through the footage and grabbing snapshots. Next up- the ordeal of getting an email sent to Matt who will then post it up for us. You would think this is a simple matter but at sea it’s not quite that easy. First off the connection is incredibly slow. Even sending a normal picture can take hours, and will often fail in the middle. So we use special compression software which of course only runs on an iPad or Android pad. No PCs supported…. The software works good on the iPad, but is honestly a piece of shit for the Android. The only problem is we can’t easily transfer things like pictures and blog posts to the iPad so we’re forced to nurse the Android version along. After about an hour of repeatedly trying different things and some flagrant cursing it finally connects and the images and blog are sent. Hopefully. It’s basically an hour of my life I’ll never get back. Oh well. I also download the weather report through PredictWind and that works well enough. Pretty happy with that software.

1130- I start looking through the weather forecast in PredictWind and notice a coastal low forming and moving up the South African coast, intersecting our course on Thursday or Friday. Uh oh… This is the critical point in the passage where we would be crossing the Agulas current. The forecast is showing 30-40 knots in places and out of the worst possible direction- against the current. This combination is known to cause “ship breaking” standing waves and is the fear of all craft, big of small. It’s nothing to toy around with on this coast. After verifying a few things and discussing with Brady and Karin we decide to alter our course and divert to Mozambique. If we can cover the distance between us and Maputo by Thursday afternoon, we can get a protected anchorage and wait out the weather then take advantage of the Northerly winds that will follow as the low moves East. We need to maintain an average speed of 5.7 knots to cover the distance leaving us a safety margin. There isn’t much wind and we’re only making about 3 knots so we decide to motor sail to make up the difference.

1900- The entire day went by pretty uneventful. The wind went away, came back, went away, and was generally being un-cooperative. We’ve also had an unexpected 2 knot current against us most of the day. This means even though our speed through the water has maintained 6 knots we have only been averaging 4 knots over the ground. If this keeps up, we will not make Maputo in time and we’ll need to batten down the hatches and prepare to ride everything out at sea. We also checked our fuel and found we have enough to motor for another 4 days straight. Sounds like a lot but under the best of conditions this is barely enough for us to motor all the way to Durban. And our conditions have been less than ideal. We decide that we would use half of our remaining fuel and reserve the other half. If we make it to Maputo this gives us just enough to motor to Richards Bay. The last thing we want is to be stuck out here bobbing around in the current with no wind and these nasty lows rolling by. I think tomorrow afternoon we’ll need to make a go or no-go decision on whether we can make it to Maputo in time. I think we’re in sort of strange counter current, a spin off from the predominant Mozambique current. Hopefully this is true and we’ll start picking up positive current over the next 12 hours. If not there’s no chance we’ll make it to cover in time and we’ll make preparations to ride things out at sea, staying East of the current which should minimize the wave heights. Let’s hope the wind and current cooperate with us. If not, we’ll just go slow and heave to through the worst of it.