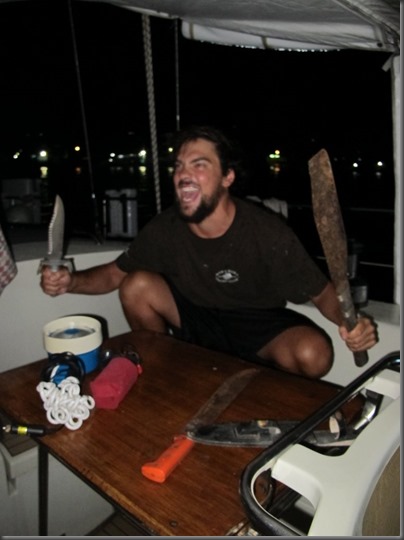 It’s 4:30AM and I’m on night watch.  Only we’re not sailing- we’re at anchor in Sorong, Indonesia.  The weather is calm and it’s a pleasant night.  Why would one be on watch then you ask?  Shouldn’t I be cozy in my bunk resting?  Well, unfortunately it’s because last night Delos was boarded by a band of thieves.

This has not been a common occurrence for Delos.  In fact it’s only happened to us once before since 2009.  But early in the morning hours I was jolted from my sleep to the sound of Brady yelling “Get the f*** off our boat m*****f*****!!!!!  For some odd reason I tried to climb out of the aft hatch, only to catch myself up in our wind scooprain protector.  Probably not the wisest choice as I’m not sure what I would have done standing there unarmed and stark naked.  But, in the fogginess of a deep sleep sometimes your mind doesn’t make sense.  Within seconds I heard the loud pop-pop-pop of a muffler-less engine cranking to life followed by the sound of a boat racing away.

It turns out that there were three guys alongside in a local boat with one onboard Delos doing the thieving.  This is exactly the same scenario as Honiara in the Solomon Islands, even down to the time.  It seems that 4AM to 5AM are prime plundering hours on the high seas.  Learning from our past experiences Delos was locked up tight and all our expensive gear stowed below so we were relatively safe but it’s still a little un-nerving to know a group of guys were prowling over Delos while we slept below.  It’s absolutely the same as having your house broken into.  You just feel so violated.  It turns out they were onboard long enough to unscrew the remote VHF mic from our cockpit, which is the only piece of gear we lost.  Pretty brazen considering our cockpit lights were left on and we’re only a few hundred meters from the local police jetty.  Just like in the Solomon’s they spooked easily.

We hadn’t heard of any problems in Sorong from the locals or other cruisers, and people we talked to seemed really surprised- but it only takes one person to ruin things.  In the Solomon’s locals would paddle up to us and blatantly say “It’s not safe here, you should leave before it gets dark!” so hopefully this is just an isolated incident.

We’re not letting it tarnish our view of the lovely Indonesian people though.  Every person we’ve met so far has gone out of their way to take care of us and show us around their beautiful country, of which they are very proud. After all in Seattle my office was broken into (twice), as was my car.  In Melbourne Karin’s flat was broken into before the burglars were scared off by her flat mate’s horror-movie screaming.  So, in large cities anywhere in the world these things happen.  Still, it’s hard not to look at someone slowly cruising by in their boat and wonder if this is the jerk that robbed you last night.  But we try to keep this in mind.

And so here I sit  in the dark with a spotlight, air horn, and machete within arms reach ready to ward off any would-be thieves.  Tomorrow we’re back to the remote and beautiful islands of Raja Ampat.