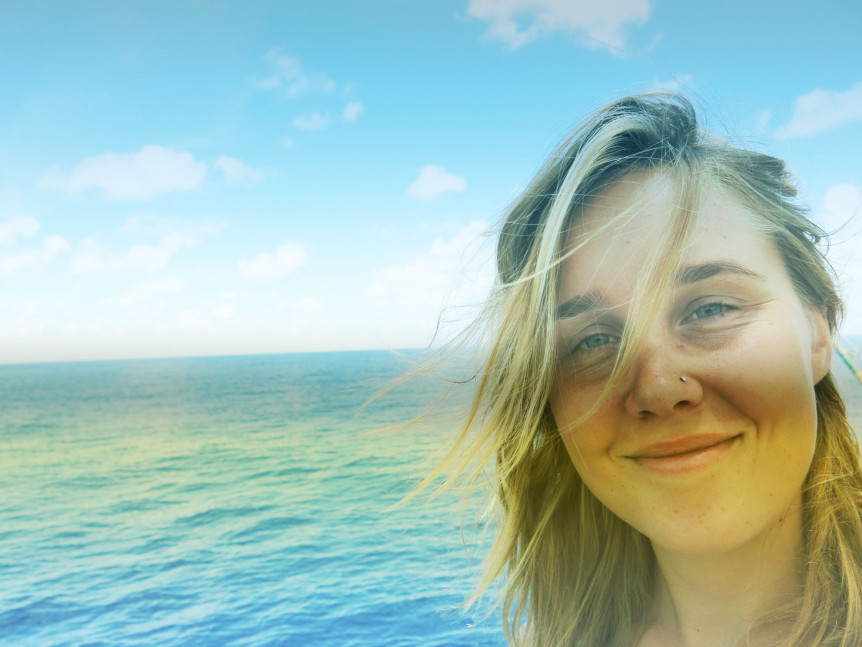 …..We had some 1600 Nautical Miles ahead of us… We were in the Andaman Islands, India and our next destination was  across the equator and into the southern hemisphere to Cocos Keeling Islands, Australia. This is our passage blog about 15 Days at sea from 2 different perspectives from Babs and myself….

“Delos, Delos, This is Port Control. What is your estimated time of departure?”

“Ahhh this mean more port fees for one more day… There would be extra formalities in the morning”. We all looked around at each other with tired eyes, half laughing, half exhausted. Are these guys serious? Everyone went back to their tasks and I continued tying Maggie on deck.Brian answered

“Okay Sir, what is your next port of call?” We had already given all the formalities and copies and copies of our paperwork to Customs and Immigration during our check out process that day. The Indian Bureaucracy is a bit crazy.

“Next Port of call is Cocos-Keeling Islands, Australia”. There was a long pause.

“Australia?” We all sniggered between us and just wanted to get some rest.

“Affirmative”. Brian said almost sarcastically. We had kind of given up being serious, we had been dealing with these guys all month, we knew how this all worked.

“What is your ETA in Australia?” We all took a deep breath. I wasn’t sure why they needed to know this, probably just filling out their form that they’re required to do.

“Probably 3 weeks”. It probably wouldn’t take that long, but it sounded like a good number.

“Ohhhh okay, have a nice trip. Thank you and Goodbye’

Brian put the VHF back and we finished preparing the boat for passage. Damn, the sun had already set, it had been a long day, we just wanted to have some dinner and go to sleep before leaving at sunrise. Nope, it was now eat and then leave. Brady and I sat at the saloon table and wrote out a watch schedule on excel while the anchor was being picked up by Max and Babs.

I walked into the back cabin to grab the printer out of closet. I walked back to turn the Invertor on and hooked up the computer to print out the watch schedule. I looked over at Karin, she was laying down and tired too, we laughed at the fact that everything was such a chore. Imagine every time you wanted to print something at home, you’d have to turn the power on, grab the printer, take it out of the box, hook it up in a tiny space and reverse the procedure once done. We sighed and she asked when she was on watch.

“2am -4am”. ““Okay sweet, see you in the morning”“Sweet dreams” I replied as I squeezed past Frida working on her laptop in the pass through bunk.

I inhaled the rest of my pasta salad, walked out on deck and the lights of Port Blair were glittering on the darker shade of the horizon. I sat down next to the rail, pulled my knees to my chest and grabbed the cigarette Brady had passed over. We sat there for a while staring at the lights slowly moving, and thinking about the past month. And just like that, our time in the Andamans was up.

I opened my eyes at what I thought was about 7am, sun streaks were dancing across the wood in our cabin and I could faintly hear Brady snoring. I grabbed my phone to check the time and was surprised to see it was only 5:30am. I must have fallen back asleep because I awoke again to my alarm. I threw on some bikini bottoms and the first top I felt in my cabinet. I used the head, walked over to the galley and stood there drinking 2 big glasses of water. Memories of the night started filtering in. I remember rain and having to close the hatch, a squall that woke me up while Karin was on watch during the night with thunder and lighting super close to the boat. There were faint memories of furler motors and winch grinding as people trimmed and arranged the sails during the night. Other than that, I slept deeply and comfortably.

I walked out and stood on the companionway steps to see Frida sitting and listening to her I-pod. She saw me and smiled, I looked around and was surprised to see us moving along quite well. All sails were out, 10 knots right on the beam and we were cruising. God it felt good. Good to have wind, to be sailing, to be sailing away from something, towards something. To be moving, having this kind of space in between of nothingness but the ocean and the sky where time kind of stands still, the days melt together and you can kind of forget about everything else for a little while. 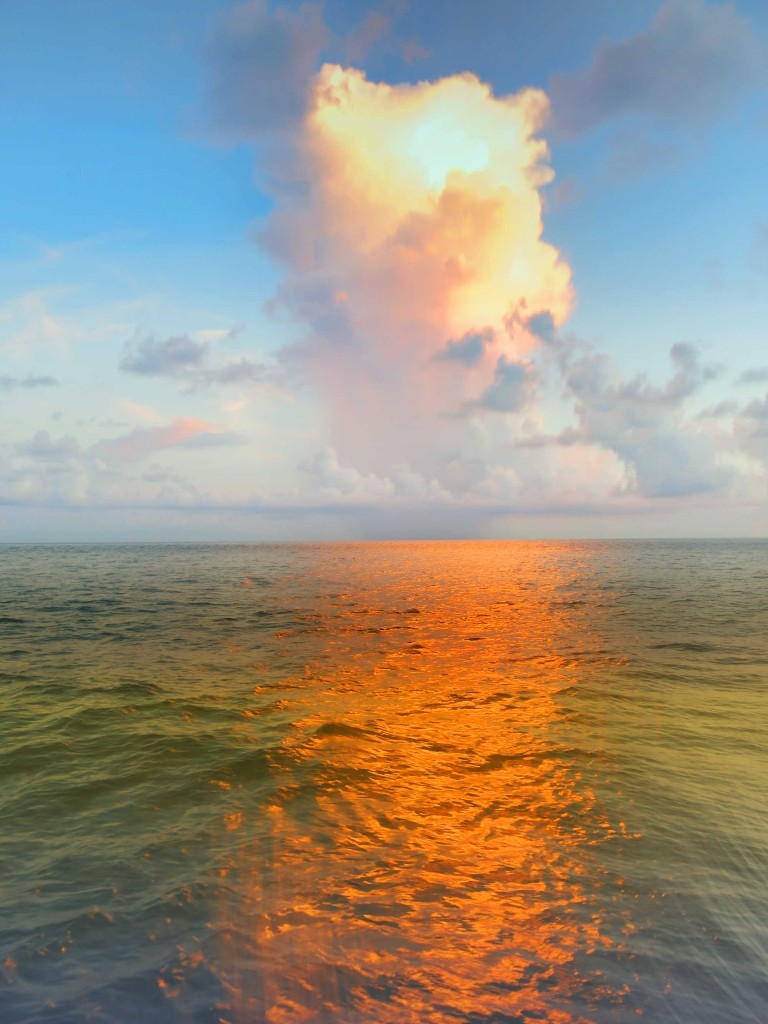 Frida went back to bed, so I started to lay all the cushions out in the sun to dry from the nights rain and then went below to make a cup of tea. I sat at the helm and made sure we were on course and all was well. Sweet, we were heading at 152 degrees and making 5.5 knots. I sat for a while drinking my tea, pulled the camera out and did my video watch log before putting out the fishing lines. An hour later, our monster lure, dubbed Frankeinbeast got a hit, so I quickly woke up Brady before pulling the line in. Unfortunately whatever was on there got loose so we retreated to the cockpit with an ‘oh well’ kind of feeling. Brady was sleepy eyed and went straight for a nap on the now warm cushions. I went below to make us some muesli and a banana and heard the aft head pump going off. Someone is up. Brady and I were sitting there eating the brown mush of oats and raisins without any real appetite when Brian came out with a coffee. Good mornings were said and then there was silence. No awkward silence or anything, we just sat and relaxed and stared off into the distance. A few minutes later Karin came out and then the four of us sat there for a while, watching the sea roll by and the clouds pass overhead.

When my watch was over, I took a nap down below for a few hours, not really sleeping and not really thinking about anything either. Inspiration swept over me and I decided to get started on making something and after taking all my newly bought Indian supplies, I plugged my headphones in with a bit of Fleetwood Mac, and I sat down and began to make a bracelet. It felt empowering to be creating something. Lately I’ve been feeling a creative urge inside of me just wanting to radiate out and I think I’ve finally found something to pursue. So it was exciting sitting down, just to start. I watched the clouds roll by as I sewed and began brainstorming ideas for a brand name, the kind of vibe and feeling I want to create. 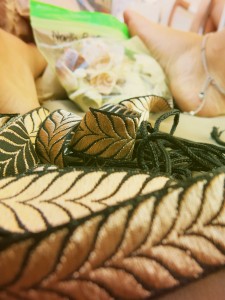 The first few days at sea are always the same. It takes me about 3 days to get into the groove of things, before then, it’s always a bit of light-headedness and a general feeling of grogginess. Even though the conditions can be perfect, theres a lot of naps, drinking loads of water and staring out into the ocean trying to cool off in the breeze.

This is pretty much what this first day out was like. I put my newly made bracelet on my wrist and felt satisfied with my progress for the day so I treated myself to a cigarette and put my IPod in. I listened to some mellow reggae while watching the ever-changing yet constant flow of the ocean pass by. The shadows on deck began to move as the sun edged closer to the small line that faintly distinguished the difference of where the sea ends and the sky begins.

We ate a bowl of leftover pasta and some spring rolls for dinner, while I worked on my computer for a bit. The wind had held up all day, we had cruised well away from Port Blair and were just past Little Andaman Island in the south. 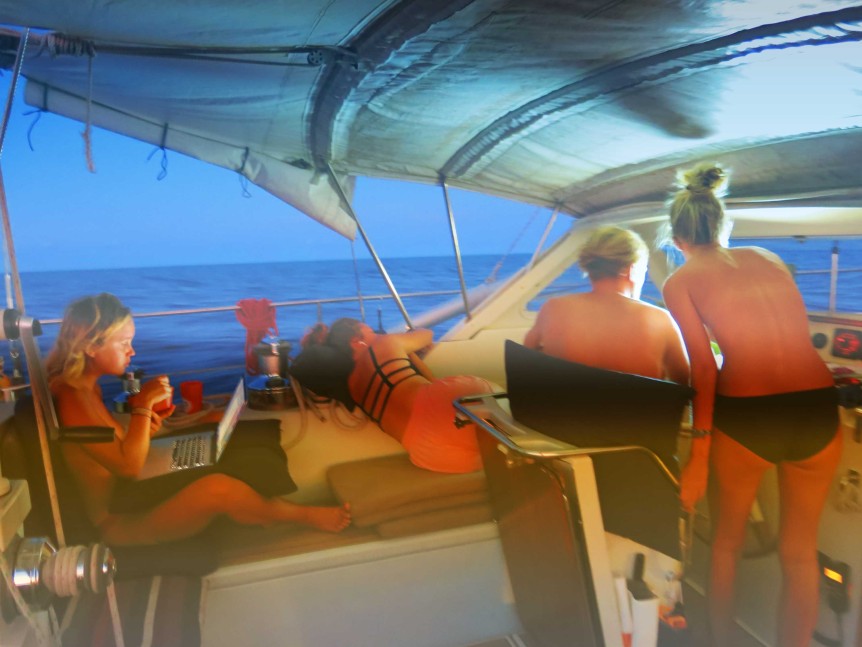 I wasn’t on watch until 10pm, still a few hours away, I didn’t feel like laying down in our cabin so I sat in the saloon and watched a few episodes of Californication with a piece of chocolate to kill an hour or so. Now 9:45, I came out on deck and switched out with Max. The night was calm and beautiful. I adjusted the sails a little as the breeze had switched a little more Easterly meaning we were on a close reach. The breeze was light though so we were comfortable gliding through the water with only a slight heel on port tack. The half moon lay halfway in the sky, sitting there comfortably and shining its light towards us and glittering the spots along the water between us.

Brady walked out with a couple cups of tea and I realized 2 hours must have nearly passed by already. We sat together and whispered to each other so as not to disturb the night. Happy and with a warm cup of ginger tea in my belly, I went down below to close my eyes.

…..Stay Tuned next for Babs’ perspective over the next few days….