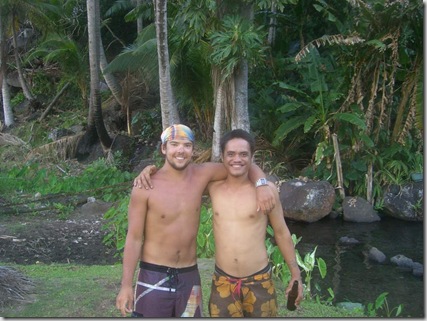 After spending three days in Atuona, Hiva Oa we decided to check out the north side of the island before heading to Fatu Hiva. We planned on leaving Atuona early so I went in to the little gas station for bread and tomatoes. There was no bread but the lady said it would be 10 minutes. Of course 10 minutes turned into 20, then 45. About an hour later someone showed up with bread. We ended up leaving at about 11 a.m. instead of 9 a.m. like we hoped for but it worked out really well.

The sail to the north side of the island was amazing; Started fast, got slow in the middle and once we came around the point the wind start blowing 25-30 which made our boat speed between 6 and 8 knots beating into it. We had a great up wind sail into the bay of Hanamenu. The bay was also blowing 25-30 so we sat in the cock-pit and made sure everything was cool after setting the anchor. Out of nowhere a Marquesan paddled a canoe over to the boat and made a hand movement while saying surfing, in a pretty strong accent, after seeing our boards on the back arch. He stayed next to the boat and tried to surf the swells breaking into the cliff so Brian and I put the kayaks in and started paddling with him. Polynesians in general take great pride in their paddling ability and he was definitely showing off. His name was Joaquim and he didn’t speak any English but we paddled with him for a while then decided to go check out the beach.

Joaquim made it through the break no problem but Brian and I tried surfing in and flipped the kayaks, which Joaqium found pretty funny. He said something in French followed by coco and I said oui. We followed him back a ways from the beach and came across this amazing waterfall flowing into a clear pool surrounded by rocks and all kinds of plants and flowers including fresh mint. After walking about 100 feet Joaquim got a huge stick and started hitting coconuts off the tree for us. When that stopped working he basically ran up the palm tree, 40 feet in the air, and kicked a few down. He gathered about four and we followed him to his house which was just a wooden/metal shack where the cooking was done and some beds outside in a palm frond covered area.

I thought we were there just to drink some coconut milk but Joaquim took the husks off and put them in a bag for us. He pointed to a tree and said Citron? I said oui. Before we knew it we ended up with a bag full of fresh limes and coconuts. Brian and I figured it would be nice to give him something in return so we said beer in a horrible French accent back to him but he understood, smiled and said oui. We didn’t want to get all our fresh produce wet so I walked it out through the surf to make sure it wouldn’t get wet in the kayak trying to break through waves. Brian made it out to the boat but I flipped two more times in some pretty big surf on the way out.

We came back with the beer and sat on some logs by the beach to enjoy. Mark, Cory, and Chris from the boat Mojombo, who we met in Atuona, also showed up on the beach. Joaquim’s brother, Ami, was there so we all chilled for a little while looking at each others tattoos before we walked to the fresh water pool and had an awesome swim, fresh cold water to drink and all the mint you can eat. Joaquim invited us to have a banana back at his house but it turned out he wanted to cook a feast. He grabbed handfuls of goat soaked in salt water out of these plastic barrels, fresh limes, coconut meat, bananas, and rice then started cooking in his little shack. Brian went back and got Erin while Ami and I smoked Bison tobacco. After a lot of silence because of the language barrier and a lot of beers later five hours had past and it was time to eat. A bunch of people showed up including a really talented Marquesan tattoo artist who lived in Atuona. There are no roads to where we were so they all came over in a fishing boat. Joaquim’s buddies brought chicken and boxed wine with them, which they were very proud of. The chicken was soaked in coconut milk then cooked over an open fire. It was hard to figure out the customs of who eats when but I think we had it figured out by the end of the night. The elders ate first and washed the plates, and then it was our turn. After us came Joaquim and his friends. We sat around again smoking more Bison tobacco and trying to talk with hand gestures. After a while I decided to go for a walk into the jungle for a few minutes. No more than a minute or two up the trail there was a light that kept turning off and on, moving 20 feet each time until it shined right onto me. I didn’t know what else to do but turn my head-lamp on and say “bonjour”. Out of the jungle a guy came walking down the trail with a riffle mounted with a flash light and scarred the shit out of me. “No Pig” is all he said to me. I guess he had been hunting pigs for a few hours with no luck.

We left and walked back to the beach where Brian and I had to tie our kayaks together and tow Mojombo’s dinghy along with Erin out of the surf. For some reason their outboard engine didn’t want to start at the worst possible time.

Joaquim invited us on a goat hunt the next day but when we got to shore he was nowhere to be found. He showed us such good hospitality that we brought back batteries and some surgical tubing that would be perfect for his spear gun. Brian, Erin and I hung out in the waterfall pool all day, every so often eating a mint leaf or two.

The next day Joaquim paddled back out to Delos just as we were about to leave with a full stalk of huge bananas for us to take. He was thankful for the batteries and tubing and we were able to say au revoir. We’re trying to learn more French so the next time we come across a Marquesan family we can communicate a bit more easily. Hand gestures have gotten us pretty far, though.