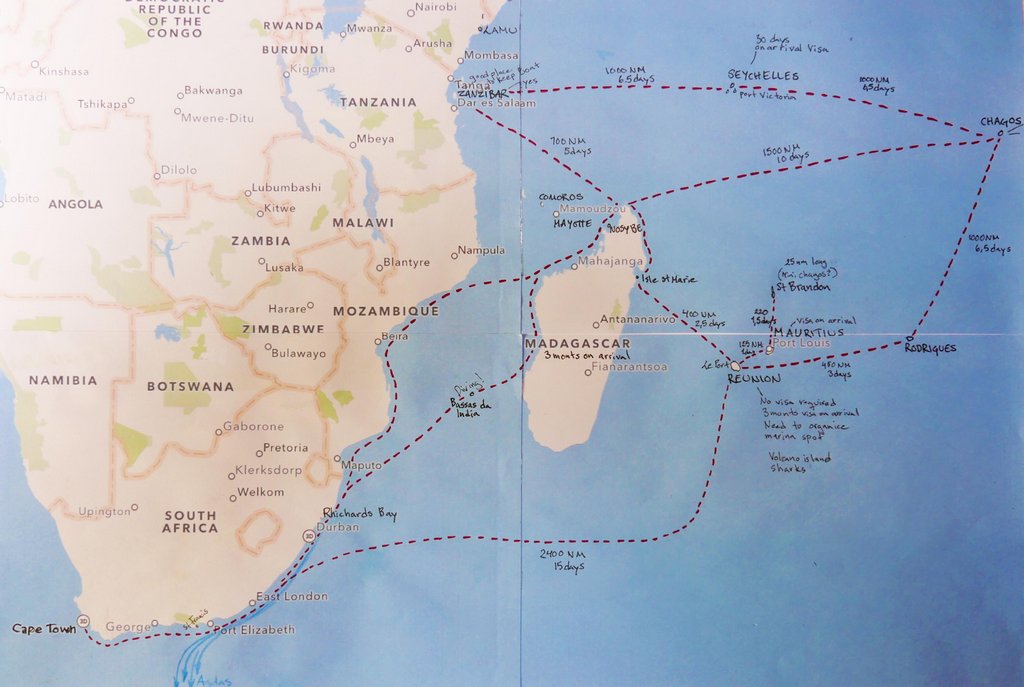 It was this time just about a year ago. Delos was in Thailand and we were preparing to cross the Indian Ocean. There are lots of stories about this immense body of water floating in the cruising community. Did you hear about so and so that lost their rudder rounding Madagascar? How about that couple that abandoned ship off the south coast and was rescued by a cargo ship? Did you hear the Volvo Ocean Race boat ran aground north of Mauritius? Did you know that there are 60 foot standing waves off the coast of South Africa? 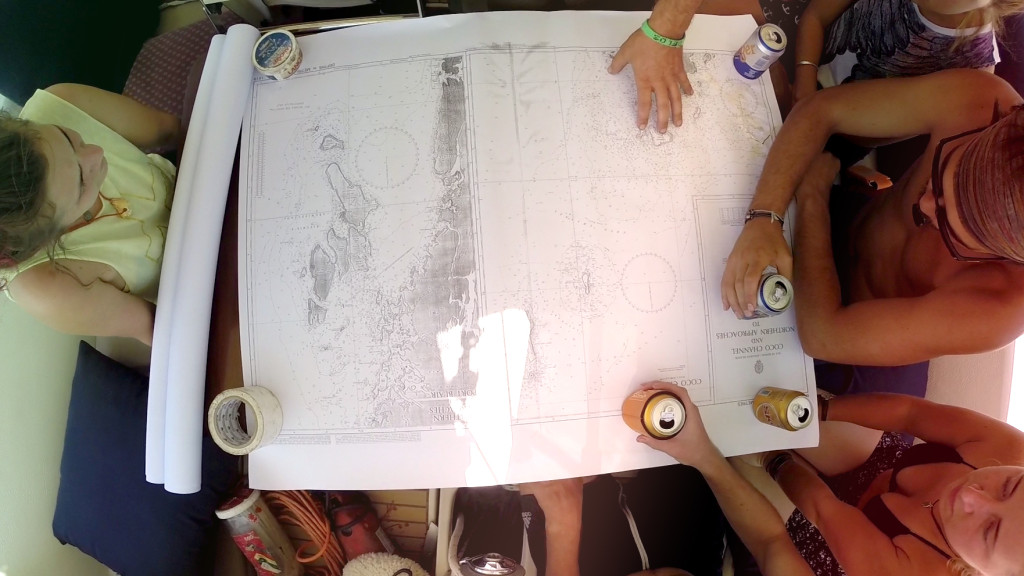 In the northern Indian Ocean there are seasonal monsoons that blow one way, then switch 180 degrees the next month. The Southern Indian Ocean bumps right up to the Southern Ocean and has massive low pressure systems rolling through that would make any sailor wee their foulies.  Oh yeah and then there are the tropical storms that come ripping through in both the North and South.

Not to the mention the pirates! If you decide rounding the Cape of Good Hope and massive low pressure systems is not your cup of tea you can head north. But then you run the gauntlet of Somalia Pirates and Yemeni Militia men that would just as soon shoot or kidnap you as wave to say hello. Not fun! 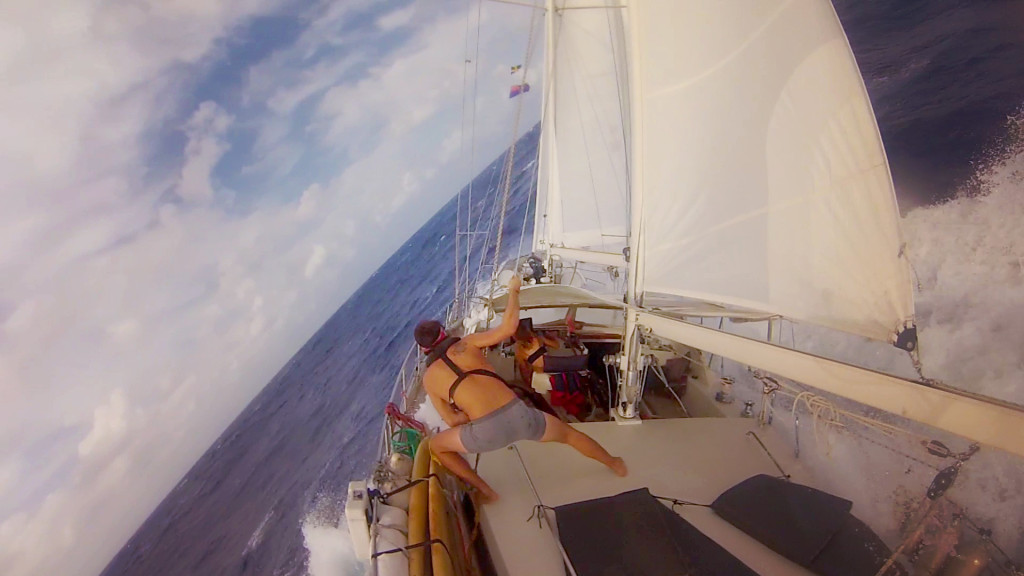 So because of this you see a lot of cruising boats hang out in Asia. They meander back and forth from Thailand to Malaysia to Indonesia and back in an endless visa-extending loop. Maybe up to the Philippines for a bit if you’re feeling adventurous. It’s a warm, comfortable, and extremely easy way to spend a few years. I think there is a definite mental block when it comes to leaving this paradise.  I know because I experienced it firsthand with sweaty palms while we dreamt up the easiest way to sail across to Africa.

Even if you put the crazy weather and trigger happy pirates out of the picture leaving Asia and heading towards Africa is a big cruising commitment. Especially if you take the southern route it commits you to sailing either to Europe or to the Caribbean which can easily add a year or two to any cruise. Once you leave and head Wests it’s pretty damn hard to come back so you just keep on going and going and going until you get somewhere you can chill for a while.

All that said the Indian Ocean has a lot of things to offer. It is incredibly remote, barely traversed, and has some of the best sailing we’ve ever seen. I’d venture to say that the SE trades in the Southern Indian Ocean rival the South Pacific. Maybe even better. And the South Pacific is kind of the yard stick that we measure trade winds by. 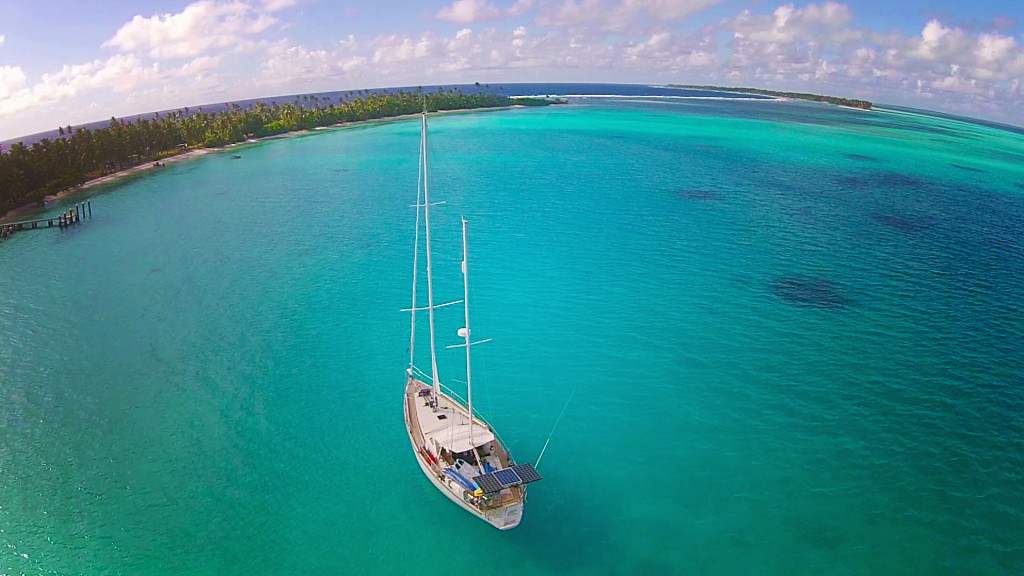 The small specks of land (of which there are few) are spectacular and incredibly isolated. For many weeks on end we found ourselves with an entire island, atoll, or certainly anchorage all to ourselves. Which is a pretty special experience.

We mention this because last season as our time in Madagascar was coming to an end we came up with a crazy idea. What if instead of sailing across the Atlantic on the normal “safe” route we try to stay in South Africa longer? What if we stayed so long that the cyclone season ended and instead of sailing West we’d sail East again and hit some of our favorite spots again?

So we pondered and pondered our options. All the pro’s and con’s. It meant another year of cruising before we’d see the Caribbean and also our family in Florida. It meant another season with our eyes glued to the weather as we dodged low pressure systems and ran from port to port down the Wild Coast of South Africa. But it also meant returning to some very special places that are incredibly hard to get to. You either have to sail from Asia or from South Africa to the Indian Ocean, and it would be a very long time, if ever, that Delos would be in Asia again.

So over a delicious Sushi lunch one day we sat down and made our decision. We all blurted out the same thing at the exact same time. Let’s do it! Let’s spend another year exploring the Indian Ocean and Africa.

Possible routs for the next season

We’ve always talked about returning to someplace we fell in love with. Like going back to Vanuatu, or New Zealand, or the Philippines. But the seasons and winds have always pushed us West. And now this is our chance to spend more time in some of the places we loved the most. Particularly Madagascar which absolutely blew us away.

So we’re gonna do it! We’re gonna leave Cape Town after the cyclones are over and turn left instead of right. It will be a crazy cool sail skirting the Southern Ocean to make enough Easting before bearing off North to make for Le Reunion. But from there we will have sweet sailing for the next 6 or so months then return to South Africa which we also love very much for another incredible summer. So it’s a win, win, win for us. And the Caribbean isn’t going anywhere right? 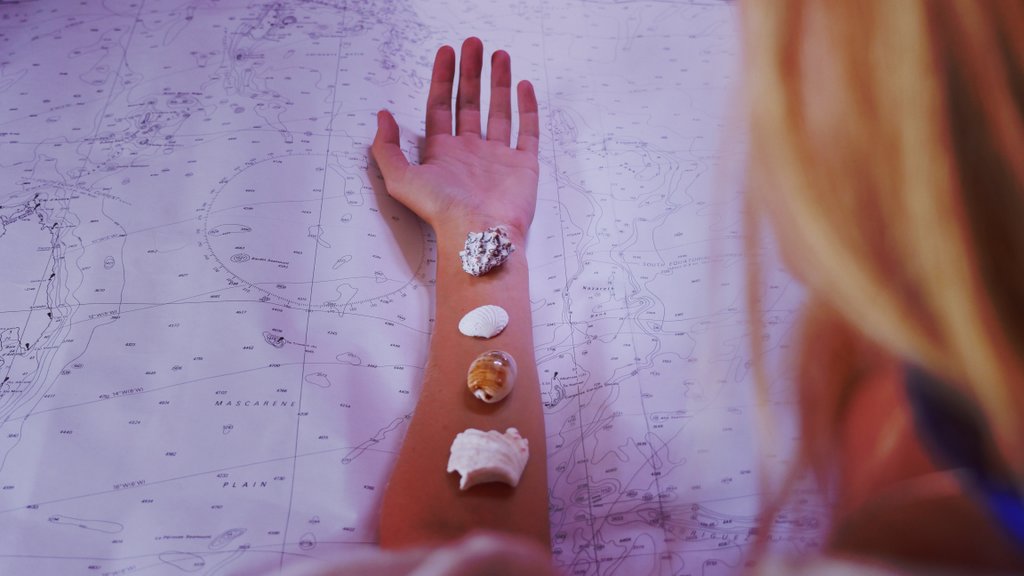