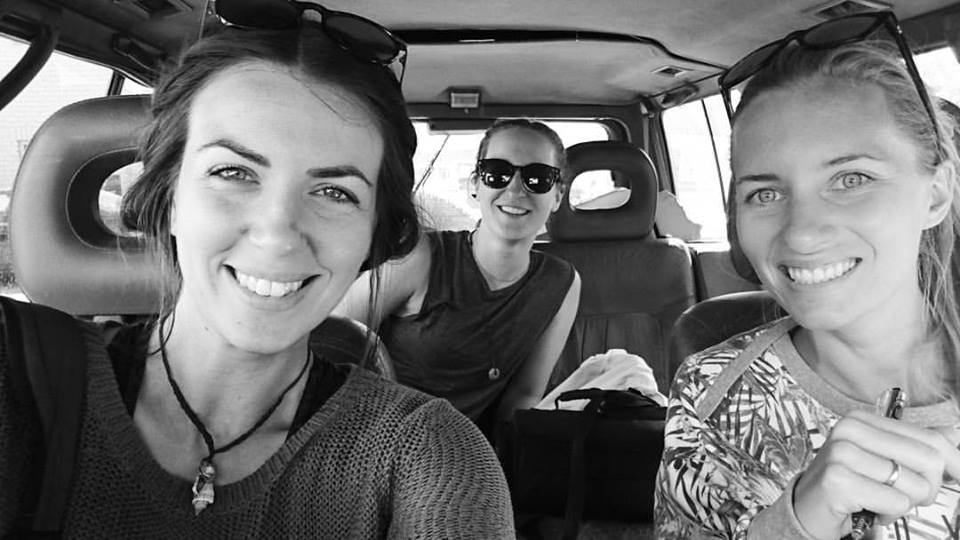 Ok, a quick update is needed here of some of the things that have happened. We’ve been preparing for our voyage to Namibia, which includes preparing the boat, fixing anything that seems to go wrong and stocking up Delos for a mountain of food.

I had always dreaded doing the food provisioning, finding it stressful to watch on their YouTube channel more than anything. I would always turn to my house mate, Steve and mutter, “God, I would hate to do that.”

Four hours, a car adventure, losing my crew about four times in Macro whilst being sent off on a product finding mission, Lisa, Karin and I have finally gotten six cow’s worth of milk under the bilge and we’re trying to figure out how to best stash the Weetabix and a hundred other more items.

Who’s Lisa and Karin? Karin is the Captain’s fair lady from Sweden and Lisa is our newest crew member from Austria. I can honestly say that I’ve never met anyone quite like these two ladies. They are so unique and inspiring in their journeys that makes me want to be a better person. Do more. Try harder. Believe more. Anything is possible- it must be- because I’m here on Delos.

I’m finding each day precious, trying to appreciate the moments shared with my new adopted family. Living in such close quarters there’s nothing hidden between anyone. And I love that. There’s a frankness to conversation, an openness that comes with a sense of family.

For once in a long time I actually feel like I belong somewhere. I am not craving for anywhere else. I am content. I go to bed each night happy and wake up to a cup of tea to the side of my bunk that Lisa (who I fondly call Austria) makes for me each morning.

Brian the Captain is still struggling to perfect his tactics of making a good cuppa. I think it may be because he’s American? It’s the only (and very weak) excuse that I can think of.

He passes me a cup of tea and I look down at it, examining its colour. I blink again, realising that he has left the teabag inside, including the spoon. I look back up at him, wondering whether he knows his mistake.

“There you go, mate,” he says, sitting back down.

It’s only at 5am on his birthday (or the day after) where we are having a very drunk conversation about world hunger (it started from Brian chasing after a seal down the docks and Brady telling him off,) that I actually bring it up.

“Well, you can make your own god damn cup of tea next time!” he slurs.

“I’m only trying to help you,” I babble blearily eyed back. “How can you improve if I don’t tell you, eh?”

He blinks at me in either astonishment of my cheek or because he can’t understand my drunk Midlands accent (it happens quite often).

We’re all feisty that night after Brady and Brian have a heated discussion why the seal should be left alone after it hisses at us as we pass it (Brady: “he’s only sleeping, bro!”), and why it should be shown a lesson so it doesn’t learn bad habits towards humans. (Brian: “You can’t let it get away with stuff like that, man”).

(Seals flop onto the docks where the boats are and you have to scare them off so you can safely walk past.) Either way, I’m watching the conversation between the two brothers as they become more sassy like a ping pong tournament. I’m confused, thirsty and bemused.

We talk heatedly about helping beggars in the street, feeding the hungry and an argument about putting yourself first versus looking after others. We cover everything as drunkards will and argue as families do.

No discussion is serious though, and the love is evident after hugs, laughter, “I love yous” and back clapping.

It’s a lot to ask three people to open their home and welcome two strangers on board. There’s always those first few days where you’re trying to figure things out and discover where your place is, what you can give, what you can contribute and making sure you get on with everybody.

I know in the first few days I worried about what I could give. About whether I would be liked. Wanted. There’s always a need to feel as though I belong in a place- I think it’s because I’ve moved around so much and haven’t had a permanent fixture in such a long time. Maybe it’s what I’ve been searching all this time. Isn’t everyone? Delos is helping me realise that. But I’ve found it’s not where I am, it’s who I’m with that makes me feel at home. Nevertheless, there’s a warmth below deck that is saturated with the fun times that have been had. There’s a positive energy and optimism that is indented with every pane of wood.

Because that’s what the Delos Project is all about.

I’ve been in Cape Town for 4 weeks now and I can already feel the difference in my soul thanks to these people.

I feel as though when I came here, I had a few fractures to fill in my heart and soul. I left the UK to follow a dream and work on myself- inspired by Delos. And by God did I have a lot to work on. Back in England I constantly had my friends and house parties to distract myself from any internal pain I felt. It was only when I was completely alone in Perth when I was forced to acknowledge these feelings and had to face with working on some good ol’ healing methods.

My path has been foggy for a long time and I think instead of worrying where the horizon is all the time, maybe it’s just good to enjoy the views that you can see- take in the colours, shapes, sounds and sensations. Because at the end of the day that’s when you are appreciating life. When you’re living in the now.

It’s been a full day of preparing for our voyage and my bunk is calling to me. We’ve got a lot of work to do tomorrow in packing away the rest of the provisioning that we’ve abandoned on deck, but I’m looking forward to it. It’s a cause that I am passionate about. It’s an adventure that I can’t wait to embark on.

That I’m already on.

If you’d like to read more by Elizabeth check out her blog!