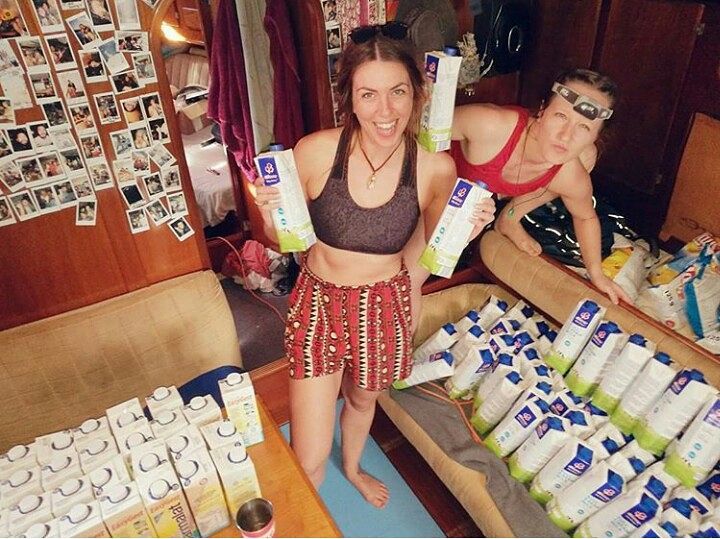 It’s been another busy day at SV Delos.

We’ve been busy packing away the late night food delivery by our good friend Ian and trying to figure out where to put everything.

I have a well-deserved rum at my side and Brian is busy chuckling away at his computer screen. Lisa the Austrian has put on some super chill tunes, Karin is already fast asleep and Brady is doing God knows what in his love nest.

The boys have been working hard to work out how to prepare for the new generator on the boat and the girls have been sweating below deck, vacuum packing rice, pasta, porridge and a seemingly hundred bags of spices.

I avoided a near disaster today.

But let me start at the beginning.

So, you either have a choice of pooping between two (usually) empty bedrooms or between Mr Brady’s room and the lounge where everyone sleeps. Now, Mr Brady is usually in his room anyway working and there’s always someone sitting at the table, so the safest choice for uttermost privacy is Brian and Karin’s bathroom.

It just so happened that one day the toilet got blocked and Brian was forced to investigate. We should have probably just called one of the local plumbers but Brian was already there so it just made sense for him to look first.

I wrinkled my nose as I walk towards him on the docks, inspecting Brian hunched over with a teeny tiny motor, pocking at it and inspecting it with a cloth in hand. He’s wearing his usual “I’m working” green oil stained Delos t shirt and green sunglasses, his fingertips stained with the unthinkable as he starts pulling hair from the mini motor.

I look up to see Lisa the Austrian pointing a camera at me.

“So Miss England has blocked the toilet,” Brian is saying, and I can hear the sneaky grin on his face.

“You’ve got black hair! And it’s short hair coming out of that thing!”

“Nah, the motor has chopped it up- pretty sure it’s yours!”

“How do you feel about this, Miss England?” Lisa asks, her accent lilting up and down in a mesmerising fashion (I always love hearing her talk).

“I don’t appreciate these accusations!” I snort, snapping back to reality, determined to not have the blame. “It must be Brian or Brady’s man-scaping habits.”

Brian shrugs suddenly. “I wouldn’t put it past Brady.”

I raise an eyebrow as I haughtily step onto Delos. “As if I’d be stupid enough to block the toilet, Briiiiian.”

We’ve all been working super hard and the arrival of Bryn, our buddy, heralds the time for a well-deserved break and a bite to eat down at the Waterfront near the docks.

“You girls want to get something to eat?” Brian shouts to us below deck.

We stop what we’re doing instantly, scrambling for our backpacks and to throw something more appropriate than just sports inners and shorts. I mean there is no harm in wearing sports bras inside the house (they are super comfy to be honest!) but the occasion demanded something better.

I jump into Brady’s bathroom and decide that using a facewipe is quicker than washing my face.

“Come on, England!” I can hear Brian shouting.

“I’m coming!” I yell, trying to pee, spray deodorant and refresh my face at the same time. I’m hungry and all thought leaves my mind. I throw the facewipe down the toilet and press “flush.”

The flush splutters slightly, and I think nothing of it. It’s Brady’s toilet after all. He’s been ill recently and I’m sure the place has already witnessed some horrors. I skip off the boat, my body relaxing beneath the glare of the African sun and fall into step next to Lisa.

I tell her and her expression falls. “Ooooh, that’s baaad,” she says, genuine concern turning her petite face. “That’s not good.”

I have a moment of pure dread. I do not want to be the person who blocks up a toilet and has to get someone elbow deep in shite to fix the problem I’ve caused. This is made worse by the fact that Brian just had to fix his loo and the fact that I got a teased that it was my fault.

Now it really was.

If this would have happened at home, maybe I could have found a 2022 Leading plumbing service to get the toilet fixed – but how do I find one here? Oh Lord, what have I landed myself into?

Now I’m embarrassed. No- I’m mortified. I wish I can go back and throw that god damn wipe in the bin. Sounds like a small deal? I’m sure it is. But if there’s ever a scenario where you have to get your mate to deal with poo then I can assure you it’s never a good one.

I’m English. I’m from a land where manners are everything. Getting your mate’s hands covered in shite isn’t the way to build relationships.

I tell the crew and they then have a theory of how they can punish me so I never do it again.

“Ok,” Brian says, his beard stained with mayonnaise from his Burrito. “You have a choice. You can A- not go to the toilet for an entire day, B- forgo tea, or C-” His face lights up only in the way when someone believes they have found a glorious conclusion, “can’t speak for 24 hours.”

I frown at him, wondering at the spark in his eye. I narrow my gaze, inspecting everyone’s mirth at my fateful choice. There is no choice. Only one.

It was a tough decision- but not pooping or speaking is far worse. Plus- no one said anything about coffee, right?

We return to the boat, continue with our chores and I insist I will help with the toilet.

He then calls me into the toilet and I can feel a wave of English embarrassment hit me.

Oh Gawwwwwwwwwwd, my mind is screaming, watching him pick up a huge plunger and shove it into the toilet bowl.

He wiggles it and starts pumping it up and down, his body bobbing up and down comically with the motion.

My pride is on the edge and I’m waiting for his verdict. Do we have to open the toilet and how much of Brady’s poop am I going to get on my hands?

“Looks all good mate,” he says, testing out the flush.

To my joy, the water is spinning below and there’s no flood of poop.

I go back on deck for a mini break and sigh with relief, my pride somehow still intact by a thread. I tell Brian that all is well.

“Does that mean we can lift the tea ban?” I tentatively ask.

He nods in that slow and calm way of his. “I’m sure because of the circumstances we can lift it this one time.”

I nod and suddenly can enjoy the sun again, glad no one has had poop on their hands because of me.

That would have been a “shit” situation.

If you’d like to read more from Elizabeth check out her personal blog at https://earlewrites.com/