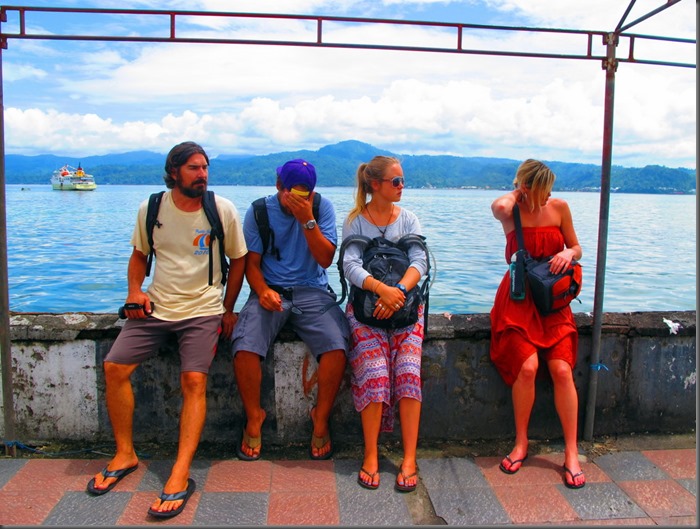 “You need an agent.” seems to be a common term here in Indonesia. My reply was always the same. I do have an agent. That’s how I got my Indonesian Cruising Permit and Social Visas. This would always be followed by hushed conversation in Indonesian. People would run into back offices and bring out other officials in various uniforms.

The other officials would then reply through a translator- “But you need an agent here in Ambon.” My agent was in Denpasar, closer to Bali and a long way from Ambon. I held my ground. “No, that’s ok. I prefer to walk office to office and carry my own papers. Thank you though.” This was always met with more puzzled looks, more conversations that I couldn’t understand.

I was led into the back labyrinth of Indonesian bureaucracy and sat at yet another desk with yet another stern looking Indonesian official. Luckily I had Abba with us, whom we met in Banda Naira and was looking for a ride to Ambon. We were happy to oblige, and take advantage of his translation skills.

More conversations, more confusion. Copies and copies of all our paperwork was spread out all over the desk and 3 officials were going over them with a fine tooth comb. I had the feeling they were looking for a reason to turn us away. Indonesian CAIT. Check. Port Clearance from Australia. Check. US Coast Guard Documentation. Check. Sponsor letter from Agent in Denpasar. Check. Passports with pre-approved Visa. Check. Crew List in triplicate. Check. Everything copied and stamped? Check! 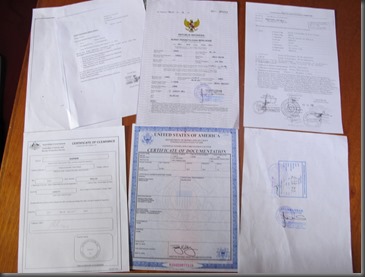 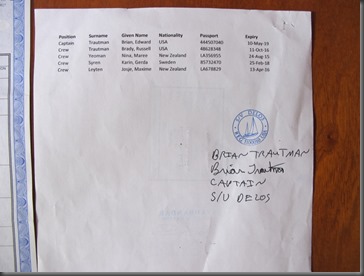 Paperwork. It’s not official until you stamp it!

Finally a call was made and more un-intelligible words spoken. Ok then- head to the harbormaster and deliver copies of all this documentation. The harbor master was a really cool guy who spoke pretty good English. His uniform was immaculate and medals were pinned to every available space on his lapel. It seems he was a sea-going man and had sailed around a bit on big cargo ships, mostly going to the western coast of Australia. He was a kindred spirit and we were sorted out in less than 5 minutes.

It was back to the Immigration office but this time things were different. I had a feeling the harbor master put in a good word for us. I was immediately sat down at the big bosses desk and offered a local cigarette, which I dared not refuse. Cool, apparently it’s not a problem to smoke in government offices at all. There was an orgy of stamping, signing, copying, more stamping, and yet more signing. Lot’s of stapling. In fact we used up all the staples and had to rob another machine to refill. Of course they were all tethered to desks and not moveable.

Some typing on an archaic machine with carbon copies. Everything in triplicate. Seriously, not even good typing but the old school hunt and peck method. Whack. Pause. Still waiting. Not quite yet. Whack Whack. Zip. Zip. Pause. Whack. And on and on it went for what seemed like an eternity. And that’s where the waiting actually began. Apparently this was just the beginning and some “processing” was required. Would you like to come back tomorrow? No thanks, I’d prefer to wait and get everything sorted this afternoon. And so they brought me a coke and I waited. And then finally I was done. With our nifty certificate in hand we were checked into Indonesia and ready to roll. And get out of the big city and back to the islands.

What I later learned is the Immigration Boss was just transferred to this island from Sumatra, where they never see yachts. He had no idea of the process and what I thought was him trying to give us hard look over was merely him trying to figure out the right process. Fair enough. We were treated kindly and fairly, and no one asked for any kind of bribe, kick-back, or gift. In fact we were given cigarettes and coke. 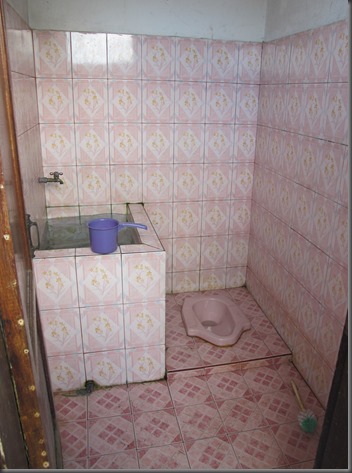 Toilet at the Immigration office. BYOTP!