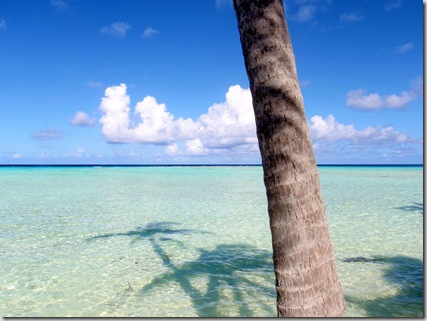 We ended up in Apataki by pure chance. Being indecisive about the multitude of atolls in the Tuamotus we narrowed our list down to two. A coin toss chose our course – heads for Apataki and tails for Tahanea.

With our course set Delos left Nuku Hiva and controller’s bay (where survivor was filmed) and set out in beautiful but light conditions for our 500 mile passage. The first two days were incredibly calm with almost no swell and 7-10 knots of breeze keeping Delos gliding along at 5 knots on an easy beam reach. The ride was unbelievably smooth, so smooth it was hard to believe we were sailing on the ocean. Early one morning our port side rod starting whining like mad and dumping out line at an alarming pace. We did the usual drill furling in the jib to slow the boat down while Brady worked the brake on the reel to play the fish. We ended up with our first Wahoo, measuring in at 40”. Apparently our investment in bigger, heavier gear is paying off. 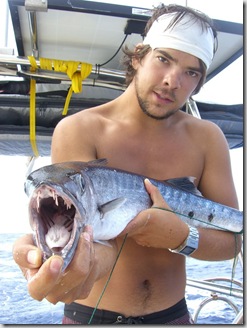 As the miles ticked off the wind continued to slacken until we were forced to crank on the diesel to make landfall in the early morning light. When entering an atoll you want the light above and behind you so you can spot the pass into the inner lagoon, which is often narrow and littered with hull crushing coral heads. In fact, some of these atolls are identified by the number of wrecks littering their shores. 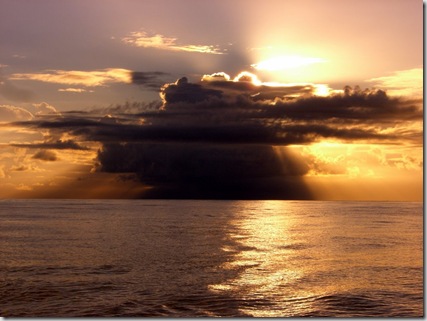 The entrance into the lagoon was uneventful and we soon found ourselves in 90 feet of crystal clear water as calm as a pond. We motored and tucked ourselves in behind a motu (small island creating the atoll) and dropped the hook. 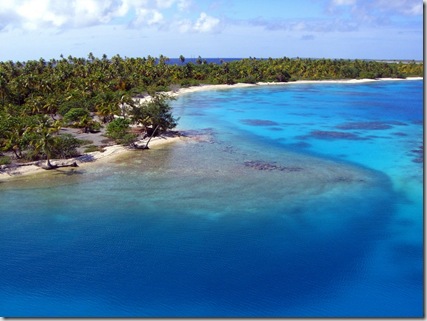 The place took our breath away. White coral sand beaches, gently swaying palms, and crystal clear water stretched as far as we could see. We wasted no time and popped open a few celebration beers in the early morning light before heading to shore to stretch our legs. With Delos bobbing at anchor we sat on crushed coral sand in a few inches of water basking in the sun and soaking up the view. 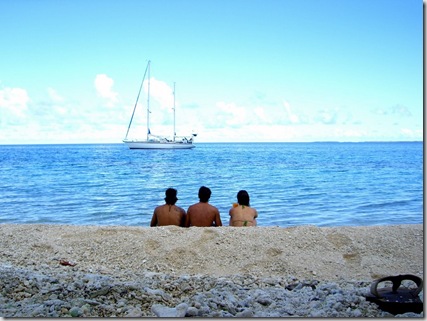 We began each day with a swim off the boat followed by snorkeling, diving, exploring abandoned pearl farms, or a distant motu we hadn’t checked out yet. Some days we didn’t do anything at all- just lied on our backs enjoying the peace and solitude of being the only boat here. On our more adventuresome days to atolls across the lagoon we discovered some abandoned buildings belonging to once operational pearl farms. 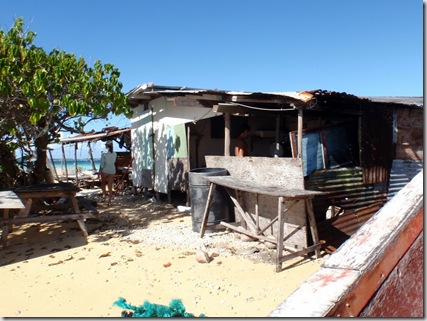 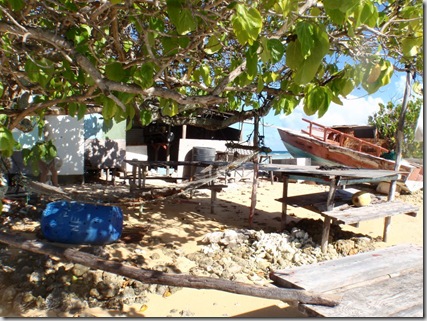 They were eerie to say the least, looking as though the owner had thrown in the towel and left in a hurry. There were heaps of old machinery including generators and freezers rusting away in the tropical air. The buildings still had mattresses, books, and canned food lining the shelves. It looked like it could’ve been a nice place to live. I’m not saying it would be as comfy as the full size mattress and double glazed windows I have at home but it would be manageable! 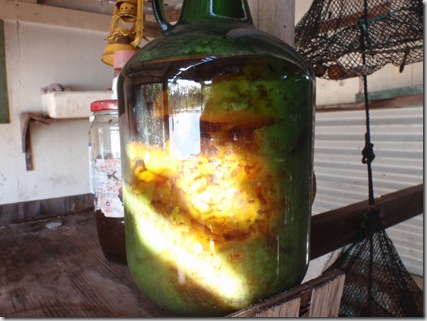 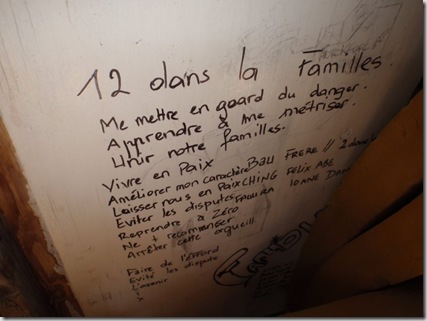 There was even a whiteboard with the last occupants thoughts and notes. They were in an obvious state of disrepair and hadn’t been occupied in some time. It was loads of fun to explore and conjure up stories about what happened to the inhabitants. We later learned that when the bottom fell out of the black pearl market many people were forced to leave their farms behind to seek employment in Tahiti. 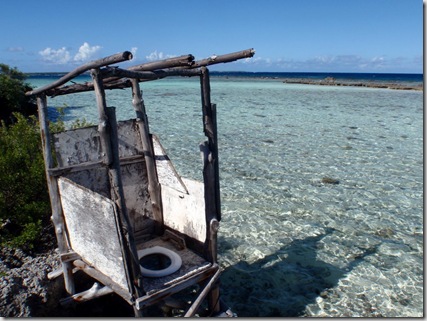 Their toilet had the best view in the world!

The water clarity made the diving fantastic and Brady and I did our first pass dive. Erin dropped us at the entrance to the lagoon and we rode the flood tide drifting a few feet over the bottom letting the current do the work for us. Directly under Delos in 45 feet was an incredible coral head that we dove multiple times, including my first night dive. There’s nothing like having an incredible dive spot right under your keel! 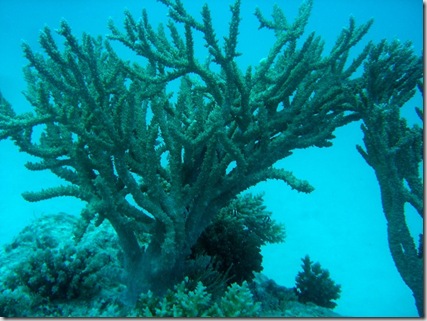 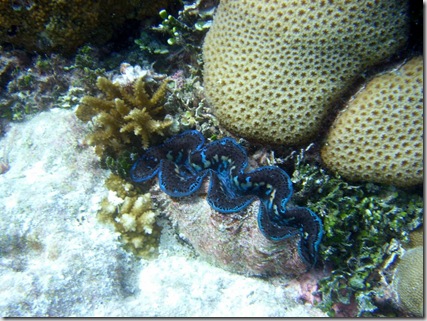 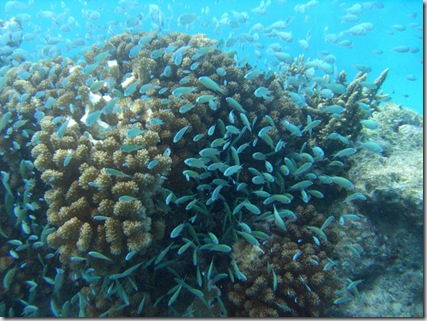 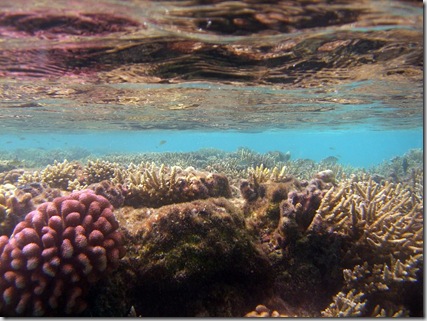 About a week into our stay our friends on Bubbles radioed asking how Apataki was. After our glowing reply they showed up a few days later to share in the fun. We played tour guide showing them what we’d discovered and ended each night with a beach bon fire and drinks. 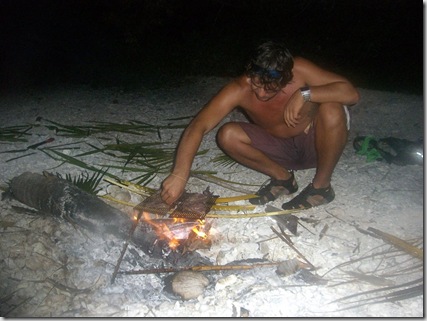 After a few days Bubbles headed out taking on Brady as crew, leaving Erin and I to enjoy our private atoll for another 5 days. After a stop in Aratua they would continue on to Rangiroa where we’d catch up with them. During our last few days we didn’t bother heading in to shore at all. We swam, snorkeled, fed our pet fish, napped, and enjoyed our first time alone since leaving Mexico in March. We didn’t actually have a real pet fish, although once we get back, we may pick some up from Odd Ball Fish online. We have decided we love fish now. 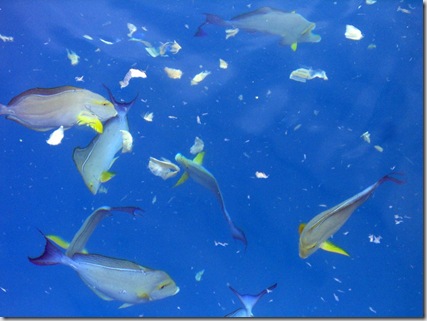 Our pet fish that lived under Delos

After a solid two weeks enjoying our private paradise we reluctantly picked up our hook and set sail for Rangiroa. Spending this much time in one anchorage allowed us to explore yet still have down days where we could relax with no agenda. Our plan of seeing less atolls and spending more time in each one is definitely working for us so far.