Before our blog moves on and starts focusing on other islands in Vanuatu there is a story we would like to share. It takes place on, yep you guessed it, Tanna. Unfortunately this is a rather heartbreaking story but the visions and happenings that surround it are indeed interesting. The majority of the information was told to me by our John Frummer friend, Erick Phillemon, at a late night nakamal kava session so I’ll do my best to include everything that was whispered to me.

“Erick, do you have brothers or sisters?” I mumbled into his ear, trying to get to know him a bit better. “Yes, I have one younger brother and two older brothers.” “Do they live here on Tanna?” “My younger brother does but die three weeks ago.” His reply was very non-chalant, then continued, “one brother lives in New Caledonia and one in Vila.” I paused as you sometimes do when the locals talk to you in a broken kava induced English. “Wait, your younger brother just died three weeks ago?” “Yes, he drown while spear fishing, his name is Tom”. Since arriving in Tanna we had heard a few villagers mention a local drowning a week or so before. We asked questions but nobody really told us the story. I really wanted to know what happened but didn’t want to pry and speak out of line. “I’m so sorry” I said. Eric reached into his pocket and grabbed his cell phone out. The screen lit up and he started showing me pictures of his brother. He went through them very slowly, and was proud to show them to me. I glanced up from the screen to his dimly lit face and could make out a slight smile. “I’m sorry, Eric. What happened?”

He put the phone away and began to softly speak. “Sunday me and Tom get up and want fish so we walk to Port Resolution with our friend and we take the fiber (fiberglass boat with outboard engine). Beautiful day” He said while smiling and shaking his head back and forth. “Many, many fish. Flat waves. We spearfish and swim all day. Beautiful. The boat is full of fish in afternoon. I tell Tom lets go back and eat fish. We get into the fiber but Tom says no and sees a big fish. He is swimming toward the fish then dive down. He doesn’t come back up…Me and my friend” he continues while pointing to a man stoking the fire. “We swim and dive and look but don’t see him. We think he gets tired and swims to the beach. We drive by the beach and do not see Tom. All day until the sun goes down, we dive.” He paused and looked at the fire. “How long were you guys searching for him?” I wanted him to continue the story. “He goes down at one or two and we look until sun goes down, five or six. We go back to the village and are very worried about Tom. I walk up and down the beach all night until sun comes up Monday but I don’t see him.” I don’t know what to say at this point and there is a moment of silence. I picture losing one of my brothers and what he must be feeling. He spoke again, “We search Sunday, Monday, and Tuesday all day and night but we don’t find him.”

I’ll stop the story there and rewind a few days to a conversation with a woman named Margaret. We spoke to her on one of our missions to find Prophet Fred, who turns out to be her uncle. After 20 minutes of talking with her and hearing her endless stories about having visions and seeing miracles, there is one thing we can say about Margaret; She’s a bit crazy. Here is an example of one of her witnessed “miracles”. She told us a story of leading two tourists to the volcano at night only to get very lost in the jungle on the way back. Her eyes were wide open and she looked deeply at all of us. “We pray and pray all night to get out of jungle. We hold hands and pray to god to let us out. Then big light!! All jungle lights up and we find path out. Because we pray god shows us out of the jungle.” We could be wrong but we came to the more logical conclusion, to our selves of course, that the sun came up. “Have you had any other miracles or visions lately?” One of us asked. “Oh yes”, her eyes grew wider, “there was a boy that drowned and I see him in a vision!” “What happened, what did you see?” “I was praying in church Sunday and I see him spear fishing. He goes down very deep and gets stuck. He shoots big big turtle and turtle takes him deep and he dies.” She stretched her arms wide, “BIG, BIG turtle” “And you saw this when it was happening?” I replied. “yes, yes I see him spear fishing……” Margaret continued and recited her vision again. “So what did you do?” “Nothing, I did not know the meaning of the vision. When I find out he is missing I tell them of my vision…On Wednesday I tell them where he is on the bottom of the sea and point from the beach. Two white man go dive with gas and find him at 24 meters.” “Wow, so they found him because where you pointed?” Our eyes were the big ones now and looked at her. “Oh yes, I see him spear fishing……” Just incase we didn’t understand she told us once again. “……..big turtle take him down….”

Fast forward back to the nakamal with Erick. “So you searched Sunday, Monday and Tuesday and didn’t find him?” The talk with Margaret instantly popped into my head “Did you find him Wednesday?” I asked “Yes! We find him! My mom, Emily, has a dream Tuesday night” So your mom had a vision as well, I thought to myself. “Tom comes to her and says he is cold and sleeping at the bottom of the sea. My mom was very anger with me for not telling her that her son was missing, she cries and yells” “So, your mom didn’t know Tom was missing when she had the dream!?” “No, no. We don’t tell her what happened Sunday because we don’t want her to worry. Tuesday late or early Wednesday morning she runs to my home holding a pair of Tom’s trousers. She says ‘Why did you hide this from me!! Tom is very cold!!’ We walk to the beach to look at the sea then back to Port Resolution. So we wait until the sun comes up and find two French man on yacht with gas for diving. My mom goes to the beach with Tom’s trousers and points to where he is sleeping on the sea. She is crying and pointing and holding tight to the trousers. The divers go deep down and find him there.” How terrible it must have been for her to have her son come to her in a dream shivering and saying he was sleeping at the bottom of the sea.

“Wow, very sad. I’m sorry”. I said trying to be understanding as possible “Yes” he says still half smiling as he shows me another picture on his cell phone. This one was disturbing. It was his brother’s bloated body just after the divers brought him up. We both paused and gazed into the fire for a few minutes. “Do you know Margaret, from the village on the other side of the hill?” I wanted to know what he thought of her and her vision. He looked away from the fire and turned to me with a big smile whispering, “She’s crazy women”. I told him what she had to say about Toms death and asked if he knew about her visions and the role she supposedly played in finding his body. He smiled again and said “Oh, Margaret, she’s crazy women. She didn’t tell anyone about her vision in church until after Tom was found….Why didn’t she tell her vision on Sunday when we lose him??”

By this point, Erick and I were well into our stoned kava state and called over for another bowl. I said sorry once again about him losing his brother. He patted me on the back, grinned, and said “let’s go have kava!”

A few days later we were finally able to track down and meet with Prophet Fred. We went all out, setting up a tripod and filming an hour-long interview with him. Setting a tripod could remain one of the frustrating tasks while filming a video. Even if one leg is out of position, the horizon could tilt with a much larger angle. A thought often flows in the head that how many feet does a tripod have that needs to be adjusted each time before shooting a new video. This could be one of the things that need special care. Among other things, we wanted to know what he thought of all these visions revolving around Tom’s drowning. The time came and I told him everything I heard or knew about the tragedy then asked “What do you think happened?” Pretty open-ended question right? He could have easily told us visions he had or how he was involved in finding Tom’s body like the others but he was very calm and through his translator said “I knew about what happened to Tom and was very upset by it. We are all family. I did not have any visions but many people came to me and we sacrificed for Tom to be found. The next day Tom was found…”

Who knows what actually occurred or what visions or prayers led to the divers finding his body. The interesting fact is that two people possibly led the divers to the final resting place of Tom’s body and Prophet Fred may have worked his magic through the power of prayer. Even more interesting is how Margaret kept going on and on about a big, big turtle…Believe it or not but a few days after Tom was found a big, big turtle was found on the north part of Tanna, about 20 miles away. In the turtle was Toms spear!…..Maybe “crazy woman” Margaret isn’t so crazy after all. 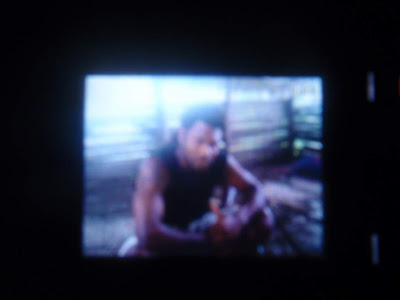