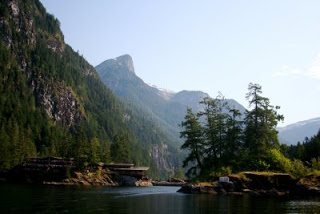 Brian and I are two weeks into a month long exploration of British Columbia. Right now we’re anchored in Garden Bay – one of a group of small bays in Pender Harbor, a few hours north of Vancouver by car. We’re awaiting the arrival of a package that is currently making that trip – it left Vancouver this morning at 9 a.m. and will travel by ferry and highway to arrive here by 5 p.m.

The contents of that package will travel a distance of 100 miles in just a few hours – a trip that would take us an entire day by boat. You don’t get anywhere quickly when traveling by sea. On Sunday we covered a distance of 42 miles in seven hours – that’s slower than most people can run a marathon. A lack of wind, too much wind, big tides, and strong currents all worked to slow us down… Not to mention that our maximum speed in perfect conditions is a mere 8 miles/hour.

During the seven hours that we sailed down Jervis Inlet, mile-high mountains forested densely with trees that climbed from the water to snow-capped peaks surrounded us. A few days prior we were anchored just a few hundred feet from a waterfall that was running so big and fast we had to raise our voices to speak over the noise. And just a few days before that we were one of two boats anchored in a forested inlet where we spent hours watching bald eagles spar for fish and then collected our own bounty of oysters and mussels for dinner.

There’s no shortage of beauty up here… So far on this trip, it’s our patience that’s been running thin.

As many times as I hear it or even say it, it’s hard to truly embrace the idea that it’s the journey and not the destination that matters. Perhaps it’s the fact that we’ve been waiting five days for FedEx to deliver a package that was supposed to get here in two. Or perhaps it’s that we set out on this voyage with an ultimate destination in mind: Desolation Sound, which is still 50 miles to our north. Or maybe it’s that we’re just not used to appreciating the going yet, since our whole lives have been so focused on the arriving.

The day that Brian and I untied the dock lines and began the long trip north we spent a fun hour talking to our neighbors on the dock, Charlene and Michael. Both of them have spent many years on boats, Michael even cruised to the South Pacific and back during a two-year sabbatical from work. They both work hard to embrace the “cruising” lifestyle, even while on the dock in Seattle, which to them values spontaneity over schedule and experience over achievement. Charlene has a PhD in the medical field and Michael is an accomplished architect – neither of them are strangers to achievement, but they’ve come to realize what’s important to them… And that’s their lifestyle rather than their resume.

Before we cast off, Charlene told us a story of something that happened to them a few years ago. She and Michael were coming through the Ballard Locks from Lake Union, a process that is a nuisance to many boaters… Even after you’ve gotten through the Locks you have to travel at least an hour or two to arrive at an anchorage. They were tired, had been traveling for a few hours already, and were eager to get to their destination. As they were exiting the Locks, they looked over to the sailboat next to them and asked the man where he was headed. He looked around, took a deep breath, and then with a smile replied, “I’m already there.”

One of the reasons Brian and I are taking this three-year journey is to get to that point. To be able to embrace the idea that “wherever you go, there you are.” Although, as I write this I realize what an oxymoron it is to strive to no longer strive. I suppose that if I want to embrace the present, I have to start now – but that seems like a daunting task. Perhaps I’ll start with baby steps… For now, I’m going to step out into the cockpit and enjoy the view.