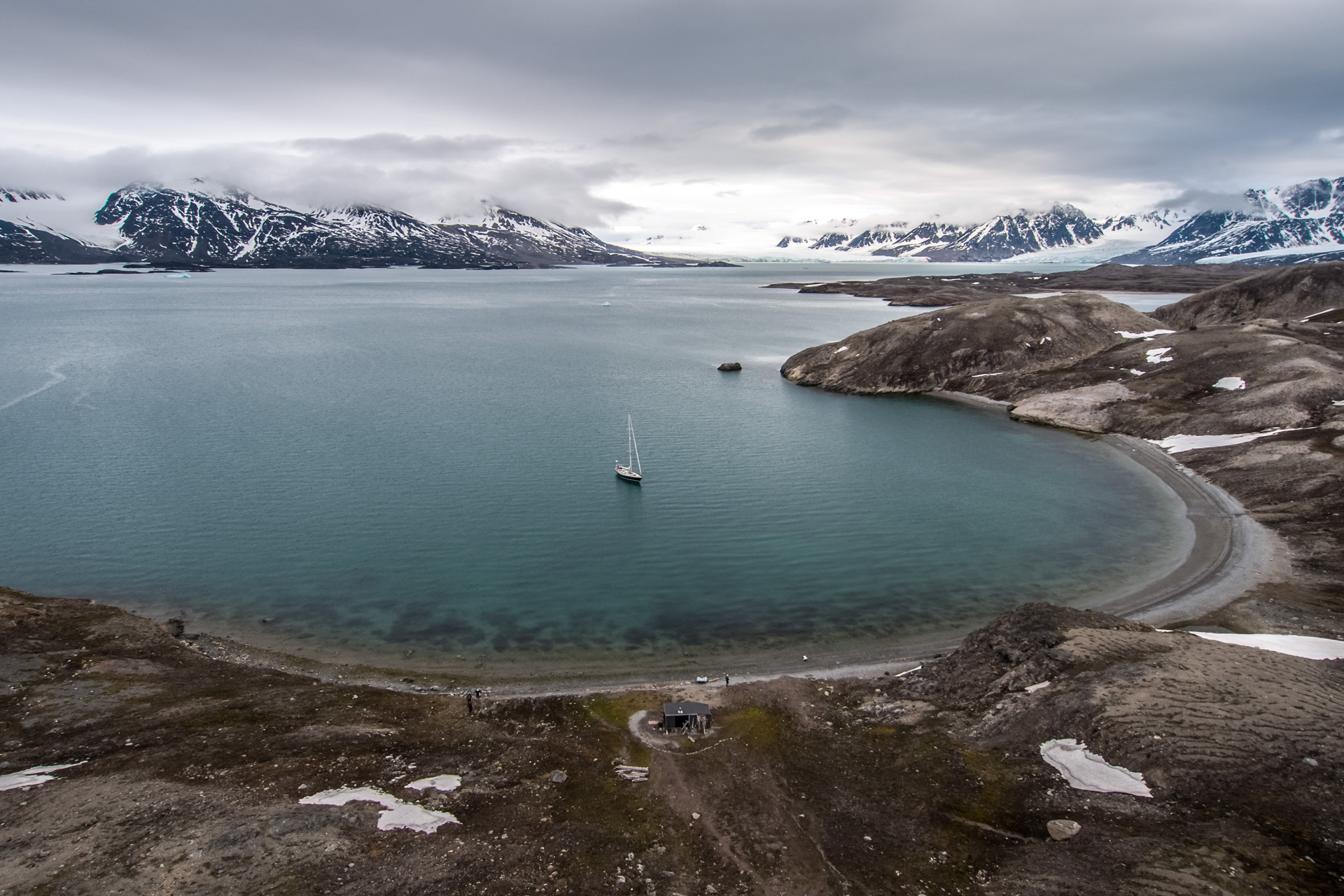 It’s day 10 and we’re further north than any of us have even been.  Isbjorn is making short tacks, gliding through the frigid water into a glacier lined fjord.  As we make the last headland the fjord opens up to reveal a unbelievably huge glacier dominating the southern wall.  Every few minutes a low thunder rumbles, reverberating off the fjord walls like a canon shot, caused by tons of ice calving off the face and dropping into the frozen waters below.  It’s 10:00PM and we’re in one of the most remote and wildest places in the entire world.  The midnight sun is shining and the weather is ideal.  It’s time to explore!

Our tiredness is swept away by a jolt of adrenaline, our bodies resisting the temptation to sleep. Andy weaves Isbjorn around icebergs the size of houses as we work our way deeper into the fjord until the path is completely blocked.   We turn around.  A few tries later we see a potential candidate to attempt a boarding. It’s a low-slung berg that looks flat and potentially more stable than the other top heavy bergs.

“Okay guys, let’s go for it!” says Andy.  We all take our positions lining the port rail of Isbjorn.  Myself and Kiril each have a go pro in one hand, ice axes in the other.  James is in his drysuit poised to jump into the water, and Brady and Karin have ice poles at the bow ready to fend off any bits that come to close to Isbjorn’sfiberglass hull.  Before we have a chance to think twice Andy has maneuvered Isbjorn to within a few feet of the iceberg.  It’s a relatively small one but still dwarfs Isbjorn with it’s mass.  Kiril and I step off the deck and up onto the ice.  Suddenly the only thing separating us from the Arctic Ocean is a few feet of crystal clear ice.  Thousands of years of snow compressed so intensely it can now support our weight!  James is in the water with his massive housing pointing our direction.  “Guys, move a little bit to your left and I can get an incredible shot of you!” Shouts James, pushing bits of ice out of the way as he makes his way towards us. 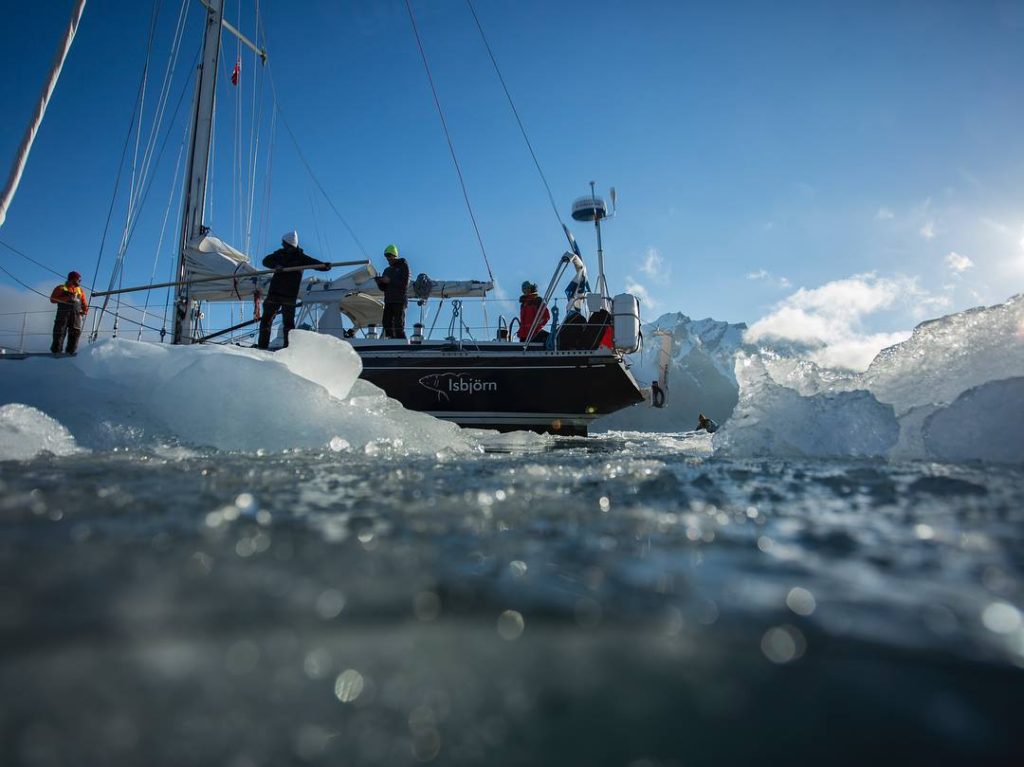 We try to follow James instructions but our sailing boots are meant for the deck of a boat, not super-slippery ice.  Within seconds Kiril and I land hard on our asses and resort to a backwards crab walk to move into position, occasionally flipping onto our bellies and using the ice axes to pull us around.  There is an amazing amount of exploring to do even on this little chunk of ice. At some point Kiril and I decide to just sit down and take a few minutes to let the experience sink into us.  It’s the first of many “once in a lifetime experiences” that seem to occur on a daily basis up here.  We use the axes to chip off little pieces of the berg, letting thousand year old chips of ice melt on our tongues and cool our mouths.  So that’s what a glacier tastes like.  Amazing! 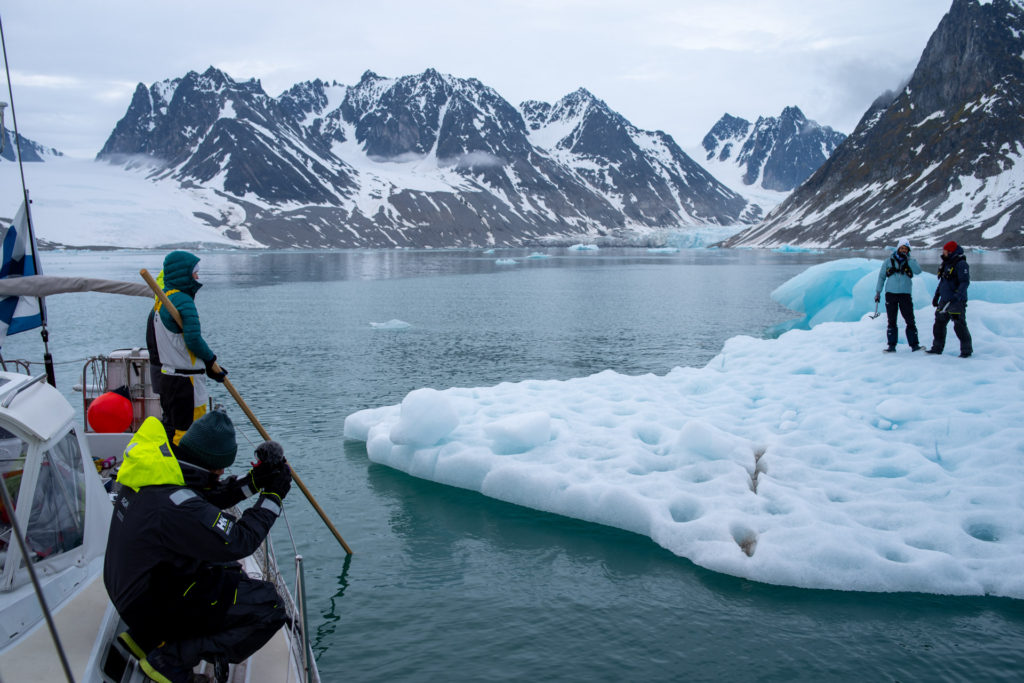 It’s nearly midnight and our bodies and minds are absolutely numb, from both the excitement and cold.  We returned to the warm belly of Isbjorn and motored outof the ice, looking for a safe anchorage.  The icebergs are captivating but the actual reason for us sailing to this particular fjord is just coming into view.  It’s a small hut perched on a barren hill overlooking a rocky beach.  Through the binoculars we can spot a home-made sign fashioned out of driftwood.  The sign simply reads “Texas Bar”.

I’d never heard of the Texas Bar until landing in Longyearben.  “Hey guys- are you planning on going to the Texas Bar?” Asked Magnus, a local sailor we’d met in town.  He was a huge proper viking of a man, towering over us with a full beard.  “It’s at the very northern tip of Svalbard, I’m pretty sure it’s the most northern bar in the entire world.”  That sealed the deal for us.  So here we were with our bellies full of of one of Mia’s delicious feasts contemplating our next move.  The time approached 1:00AM but the weather was fair and the sun was bright, so bright in fact you’d swear it was 1:00PM.  But here only 600 miles from the North Pole it shines 24 hours a day in the summer, lazily circling above the horizon and never setting.

“Are you guys keen for a mission?” Asked James. James was always keen for a mission.  No matter the time, weather, or activity in mind he was always charged up and ready to go.  “Yeah sure, what did you have in mind?  See if the Texas Bar is open?”  I replied.  “Exactly!” Was his answer.  You don’t waste good weather here so we loaded up the rifle, layered up, and grabbed a few cameras.  Andy and the girls opted to stay behind so it was just myself, Brady, Kiril, and James.

We landed our little rubber floor dinghy on the rocky shore and and pulled it well above the high water line.  This isn’t a place you want to swim for the dinghy if you can avoid it! In the Caribbean swimming out to the dinghy is a much needed respite from the heat.  Here it’s like having 10,000 needles simultaneously stuck into you, followed by hypothermia.  And that’s if you’re lucky!

The Texas Bar is a small shack built entirely of scrap wood.  It sits about 50 feet from the waters edge and beckons to you as a safe respite in this otherwise barren landscape.  To say it’s incredibly remote would be a complete understatement.  It’s position at nearly 80 degrees north is quite literally on top of the world.  There are no roads in this part of the world.  During the winter months the only way here is by traversing the glaciers that make up the islands interior via dog sled or snowmobile.  During the summer you must come by boat.  It’s someplace you really, really have to work to visit. 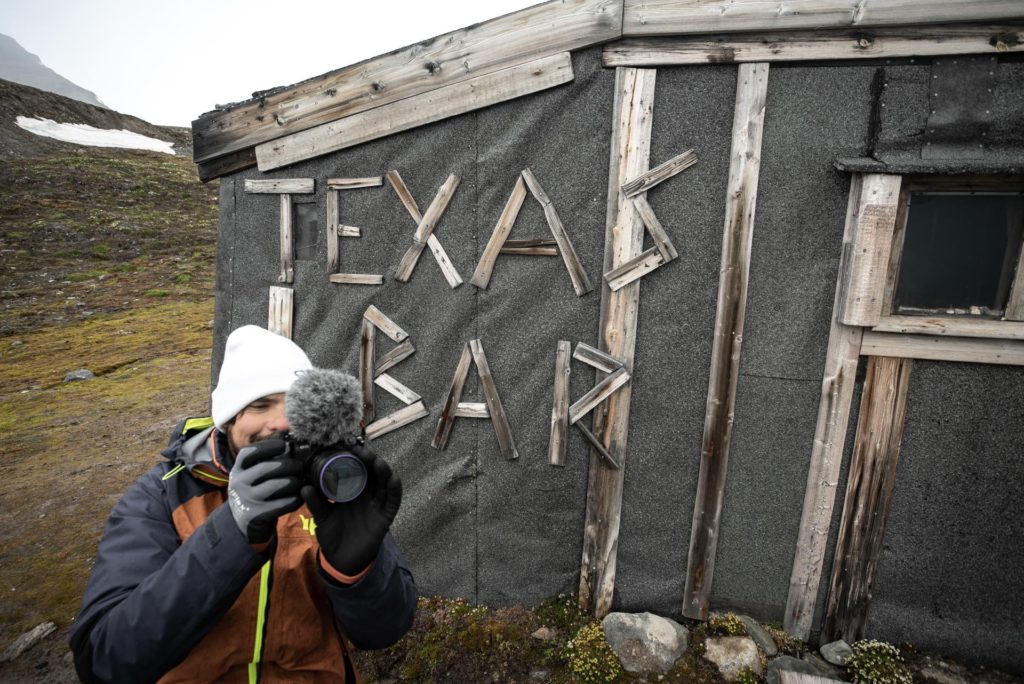 There are no trees around, only the occasional hint of lichen clinging to life on a rock.  Everything was either brought in by sled, boat, or washed up on the beach. The front had a rickety table fashioned from wood bits found here and there, and of course the drift wood sign that we spotted from shore.  There was no doubting we had found the right place.  The roof, walls, and even windows were in good shape.  It was immediately obvious that this building was cared for by those that used it.  I walked around back to find a door sealed tight by a simple wooden bar.    Inside was a storeroom, sharing one wall of the cabin, stocked full of wood for the long winter.  Walking around the side I found another door, with the same style of wooden bar to keep it locked up tight.  Simple, effective, and apparently meant to be polar bear proof.

I finally had to remove my cumbersome gloves to work the stuck latch on the door, and when I did the inside revealed what could only be described as an entryroom to the main cabin.  There was a place to sit, remove your boots, and hang your heavy winter gear.  There was another catch of wood, assorted tools, hammer and nailes, axes, and even a saw.  Everything in here served a purpose and was meant for survival in the harsh environment. 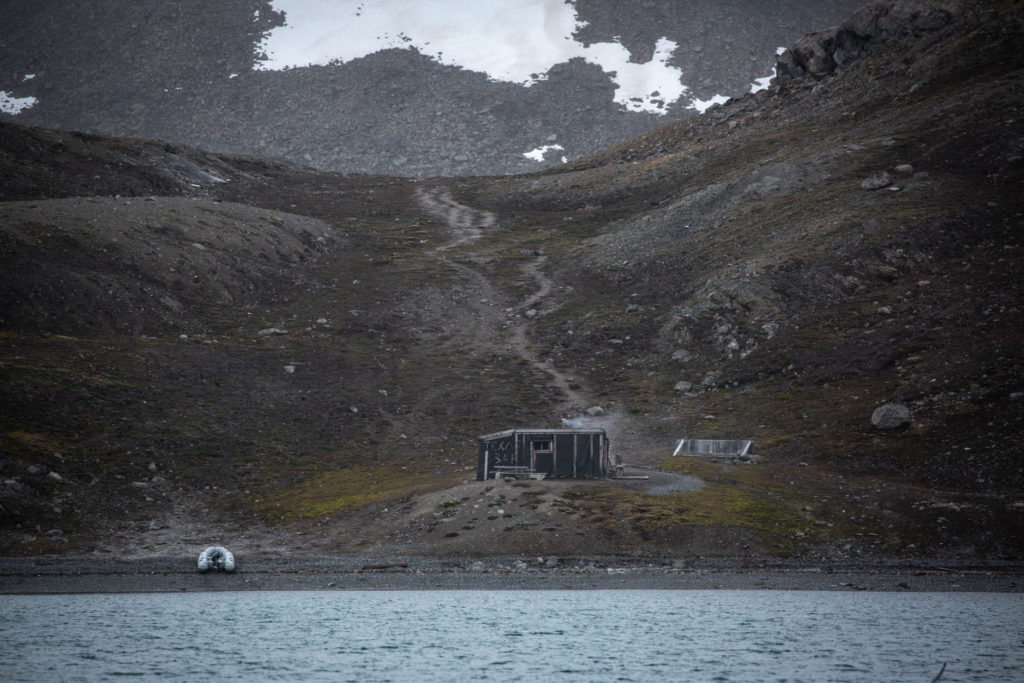 “Wow guys check this out!”  I yelled to everyone still outside.  “This cabin is completely kitted out!”  I had finally gotten the last door worked open and was now standing inside the small main room of the cabin.  To my left there was a window with glass, shuttered from the outside.  A double bunk bed was along the back wall, and a wooden table and two chairs along the other.  To my right was a wood burning stove complete with pots, cups, and even drying ropes ready to hang your wet socks on.  No electricity, no running water.  Just the bare essentials of life one might need to warm their bones after a long overland snow mobile ride in the dead of winter.

Places like this give me chills, it’s easy for me to imagine spotting this little hut after hours of hard travel.  Seeing it and imagining what a luxury it might be to warm your feet, have a hot cup of coffee, and know you’re safe from polar bears for the night.  We lit a few candles on the table and started flipping through the guest book, which was riddled with messages of previous travelers passing through from all over the world.  It’s at that moment we realized where the name “Texas Bar” came from.  Just next to the top bunk bed was a simple wooden shelf lined with bottles of alcohol.  It was a bar, but only in the most rudimentary sense.  This was a place for travelers, for those passing through that could use a sip of whiskey to warm their insides. 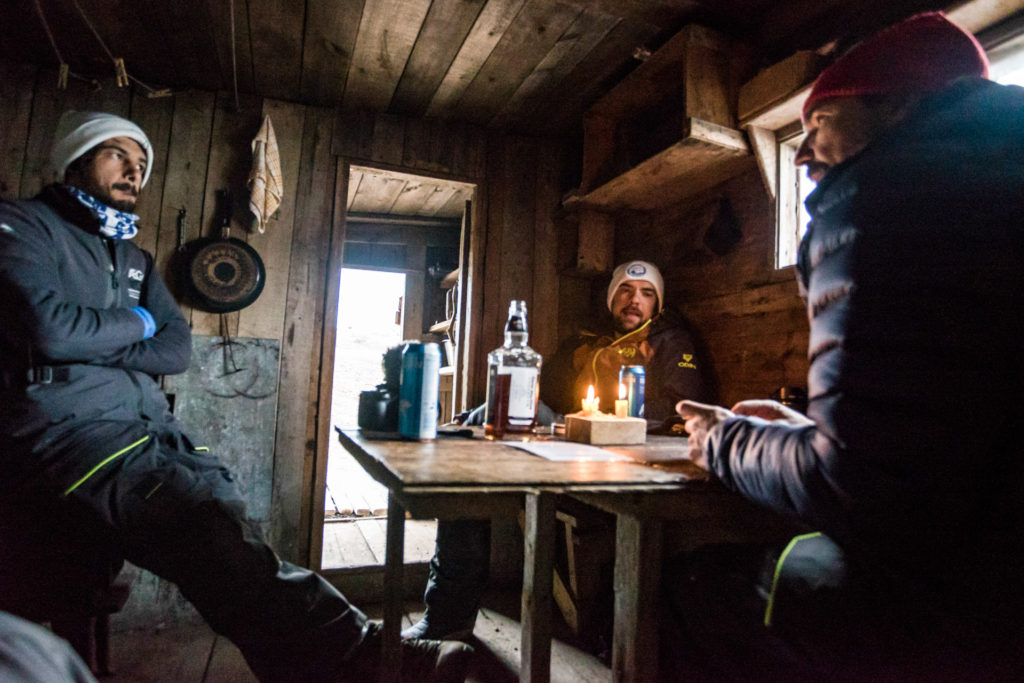 “Check this message out guys.”  I said reading one of the most recent entries out loud from the tattered guestbook “To all those that follow in our steps, please enjoya sip of the finest whiskey we had.  Wishing you the best of times at the Texas Bar.”  So that was the concept.  If you make a stop at the Texas Bar be sure to leave it in better condition than you found it.  And also leave a bottle at the bar for those coming after you to enjoy.  We cracked open the brand new bottle of Jack Daniels and each took a long, hard pull.  We started a fire in the stove and stripped down to our base layer as the temperature inside crept from freezing to something tolerable. 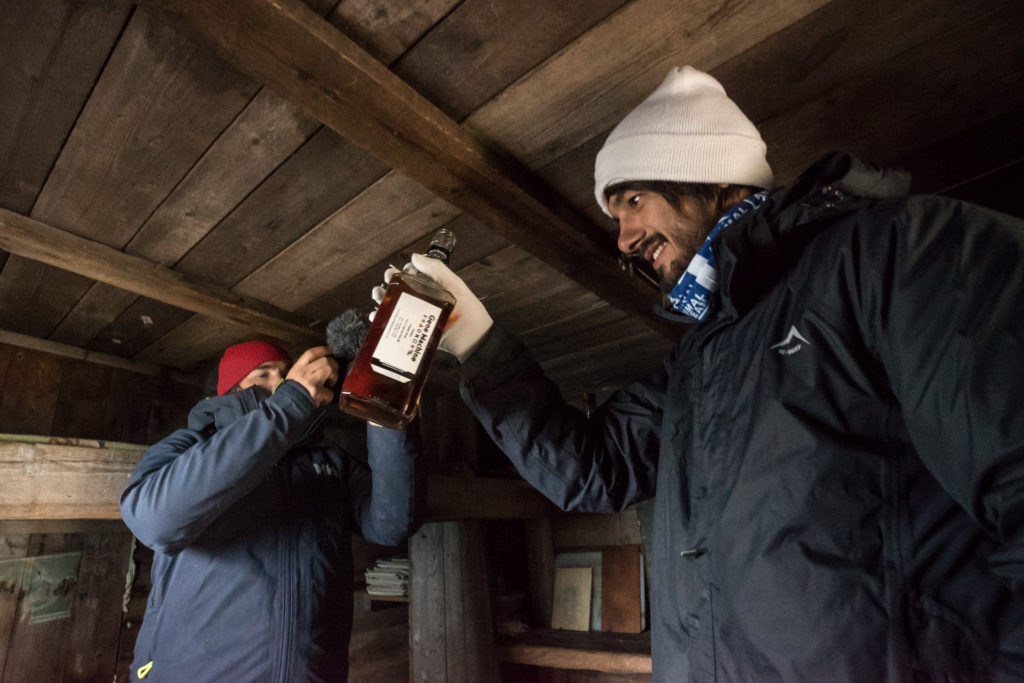 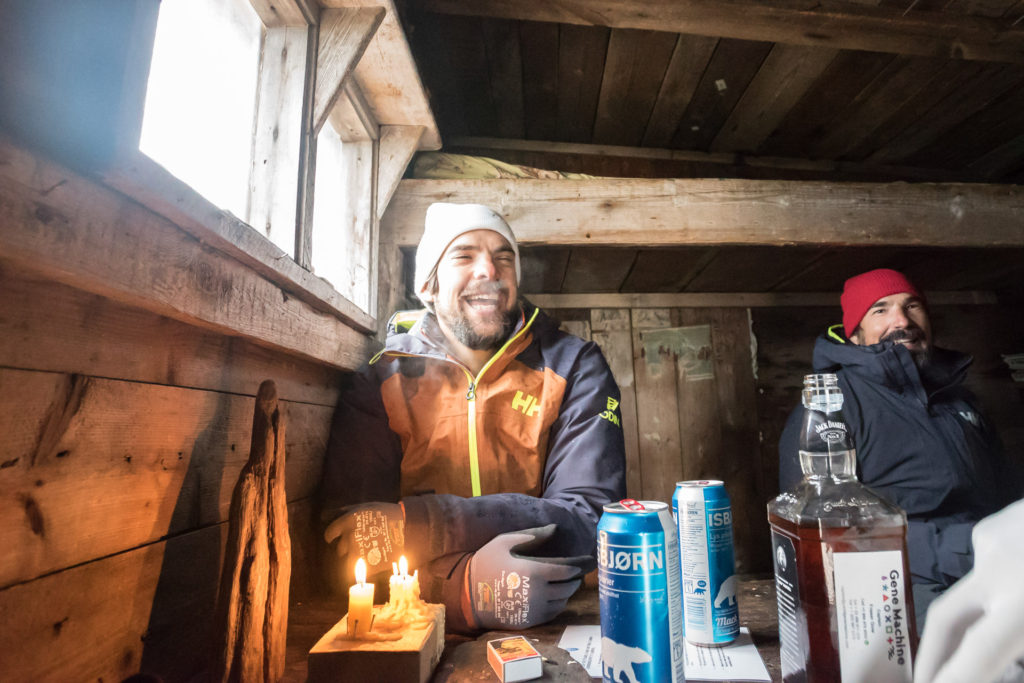 We were four guys, all from different backgrounds, all from different countries, crowded around a table meant for two sharing outlandish tales of our adventures, generally talking shit, and taking pulls straight from the bottle. Before we knew it we had a nice buzz and it was approaching 4AM.  I pulled out a bottle of Delos moonshine we’d brewed onboard and flown to Svalbard for a special occasion.  I placed it on the shelf in place of the bottle of Jack we’d polished off.  “Please enjoy a bottle of our finest moonshine.  It was brewed onboard SV Delos crossing the Atlantic ocean, and was made with love and desalinated water from the Caribbean Sea.”   This my friends, is what the most northern bar in the entire world is all about. 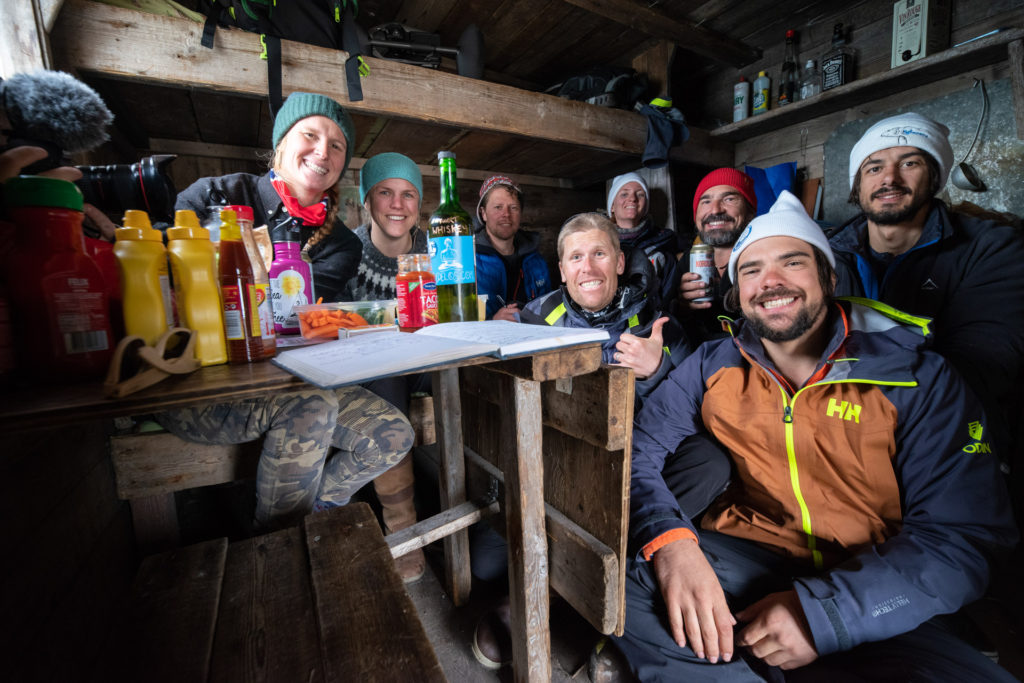