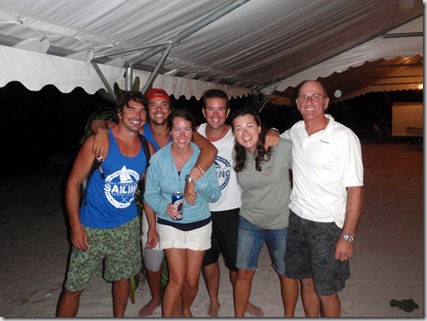 We’re not normally fans of organized cruising events, or things with fixed dates and timelines in general. We decided to make an exception to join the Tahiti to Moorea rally though, mostly because we heard the free t-shirts were really cool. It would be a good rendezvous to catch up with friends that we hadn’t seen since the Marquesas. With a firm date to be in Tahiti we left Rangiroa and the Tuamotus behind and plotted a course for the Society Islands. The conditions were light and after making less than 100 miles the first day we cranked up the iron genny and put the throttle down.

As Erin mentioned in a previous post Tahiti was a shock to our system. With Delos tied up at the downtown Papeete yacht quay (first dock since Mexico) we headed in to explore the city. First order of business- cheeseburgers and beer. Never mind it was barely 10:00AM. We weren’t the only ones and fit in nicely with the local crowd. The noise of the city was assaulting. Cars, buses, trucks, and people were everywhere. It was such a contrast to the isolated Marquesas, Tuamotus, and open ocean we’d experienced for the past 3 months. It wasn’t long before we struck up a conversation with a local musician who insisted on buying us all the beer we could drink to welcome us to his island. Naho ordered pitcher after pitcher and we downed them one after another. After running up a 10,000 franc beer tab (just over $100.00) Naho took us on a tour of the city by way of public bus, pointing out the town highlights as we went. All us us slightly intoxicated we worked our way down to Marina Taina to look for our friends on Bubbles and Ghost. Naho seemed to know everyone in town, smiling and shaking hands with bus drivers, random people at the bus stop, and the marina security guards. He’d spent his entire life on the island and it showed. Just as quickly as he appeared Naho mumbled something about sobering up and needing more beer, then disappeared.

We fell in with our friends on Ghost and ended up crashing a dock party. The rum was flowing freely and we had a heck of a first day in Tahiti. Since Ghost needed work down on their rigging they decided not to participate in the rally. We made plans for Brad and Kat to accompany us on Delos along with Roger from Beaujolais for the weekend. 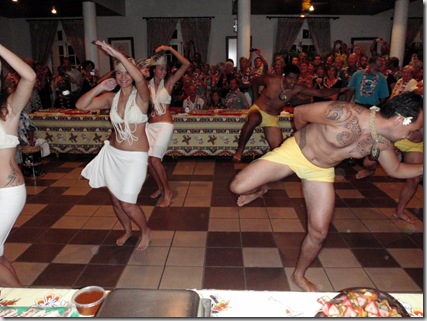 The rally kicked off with a cocktail party followed by traditional Tahitian dancing and a blessing of the skippers. The topic of conversation was the weather- a maramu was forecasted for the next few days with winds of 25-30 knots and gusts up to 40 knots. A few boats opted out and chose to stay on the dock. With confidence in our crew and boat we left the quay and motored towards the line. 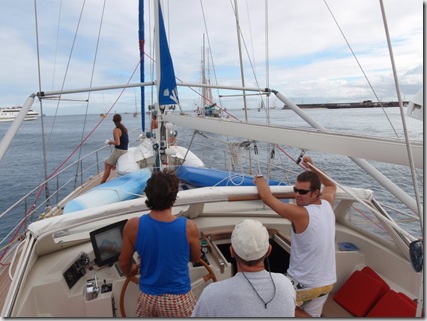 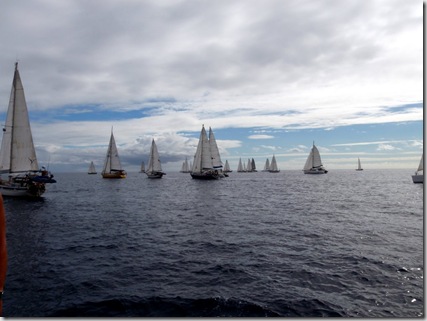 Still a ways off we heard the 1 minute gun, then the start gun. A bit late we crossed the line with full sails up and trimmed in hard for an upwind sail. In clean air on the windward side of the fleet Delos worked her way up. In 8 knots of breeze we passed the stragglers, then reached the middle of the pack. Out of the lee of Tahiti the breeze built to 15 then 20 then 25 knots. Delos was in her element and pulled steadily ahead. 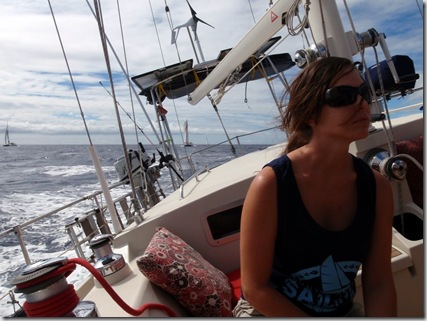 Up ahead we could see mayhem with overpowered boats rounding up continually as the waves and breeze continued to build. At a steady 35 knots we put in our third reef and dropped the mizzen. Reefed down we hit a constant 9-10 knots with bursts to 11. One unfortunate soul decided to fly his kite and immediately rounded up followed by a near knock down. He struggled for a tense few minutes shrimping his kite and dragging it along side until getting it back onboard. 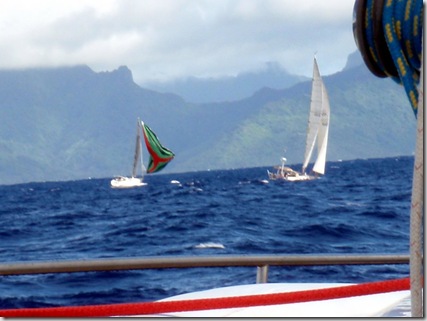 Sailing beautifully Delos sprinting ahead passing what should have been faster boats. I credit this to our crew work with constant attention to sail trim in the heavy gusts approaching 40 knots. The heavier weight also allowed us to handle the large waves better without betting knocked around so much. Delos finished 7th out of 37 boats only being bested by 4 very fast catamarans and two 65 foot monohulls. We even beat the other Amel- a new 54′ version much to the owner’s chagrin, who just the day before told us how much better his boat sailed than ours. We finished 10 minutes before him in a 20-mile race. He may be able to come back from that defeat, but if not, selling his boat is always an option (he can learn more here if he wants!) and get a new one that might be a bit faster. However, we may just best him again. 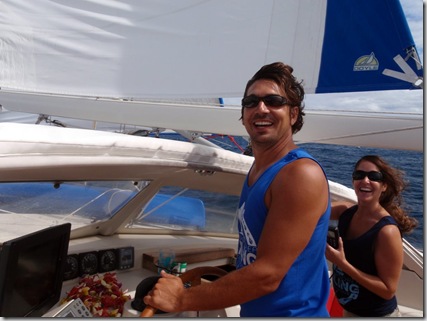 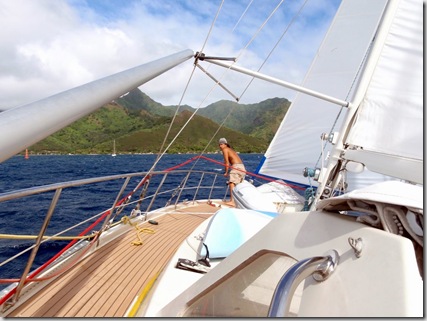 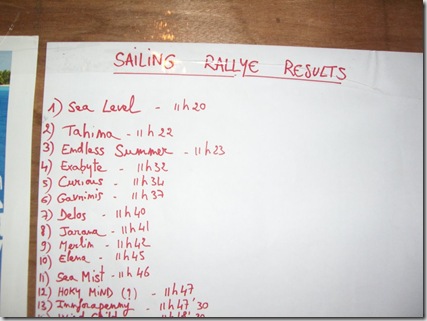 With a well timed tack we crossed the finish line and set the hook in Oponhu Bay on Moorea. We immediately cracked open some celebration brews in preparation for the evening beach party. After a few hours of good holding Delos suddenly began to drag in the 35 knots of breeze, amongst a tightly packed anchorage with over 40 boats in it. I dove the anchor and found a small 26 lb CQR anchor wedged under our hook preventing it from setting. With he rode chafed through it looked like someone had a real bad time and high tailed it out leaving their hook behind. With our hook reset we collected our new spare anchor and had a grand party on Delos involving the crew from a few other boats. 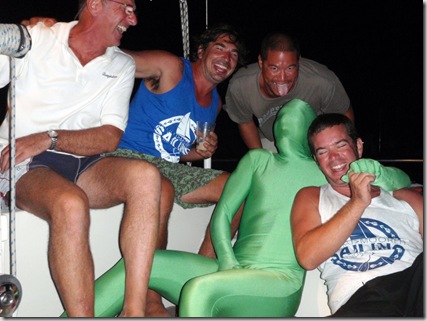 Sometime around 4:00AM greenman came out. The next day friends on a few other boats said they appreciated our “anchor watch” in the heavy winds knowing they were safe and sound with Delos on duty until the break of dawn. The festivities continued the next day with canoe races and a traditional Tahitian BBQ lunch. Unfortunately it was raining all day and the food was absolutely terrible. We dug out our foul weather gear made the best of the weather. We did give up on the food however and headed back to Delos for cheeseburgers. 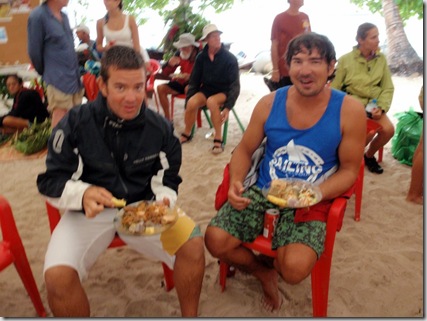 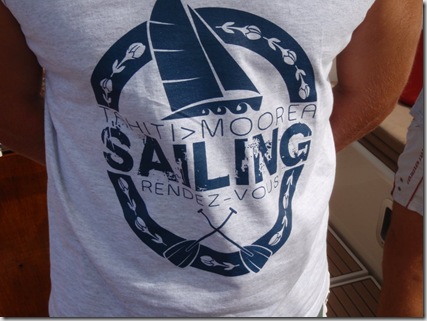