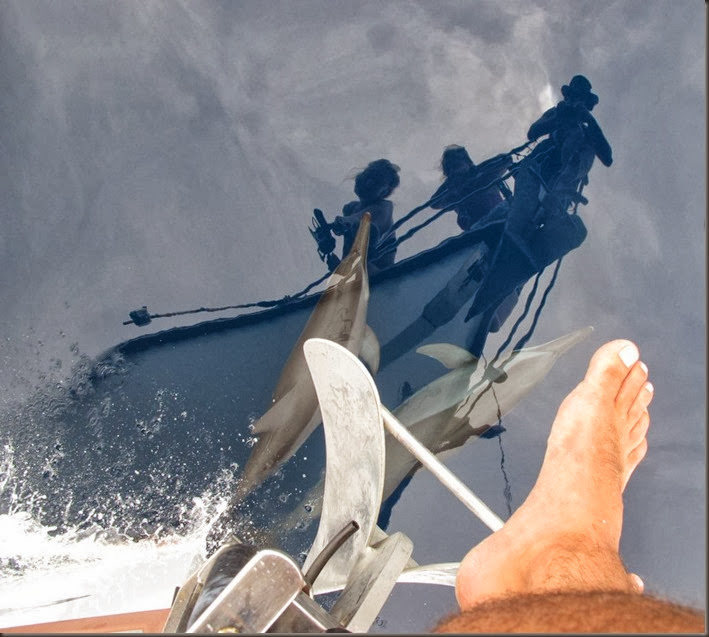 We’d spent the last week at the Raja Ampat Dive lodge, tied up at their secure mooring and enjoying the beautiful scenery.   We went on a expedition into the jungle to see the Red Bird of Paradise and did a few dives at the amazing Cape Kri.  But it was time to move on so we slipped the mooring and began our journey towards Fam, an outer island on the Western edge of Raja Ampat.

We were motoring along nicely in the early morning light making a few knots against the current.  I glanced at the engine instruments expecting all to be well but the engine temp was high- well above normal.  I managed to shut the main down before any permanent damage was done but we were in a bit of a pickle.  We were in a fairly narrow channel with reef on both sides.  It was too deep to anchor (nearly 200 ft.) and the current was sweeping us deeper into the channel and towards the shallows to our South.  Normally this wouldn’t be such a big deal.  Just hoist sail, do a few short tacks, and get yourself into clear water.  Except we are about 20 miles from the equator and the wind is fickle at best, maybe giving you 5 knots for a few minutes before switching 180 degrees to backwind all your sails, then dropping to zero leaving you bobbing in the swell and wishing you had more beer.

Luckily we were towing Maggie so we made a quick decision to tie her along side and see if we could make any headway.  With Maggie bow and stern tied to our starboard cleats we cranked up the trusty Yamaha and gave it all she had.  Delos is not exactly a light boat.  With all our cruising gear, dive gear, and home brew supplies onboard her waterline is pretty low these days.  It was cool to see a little 25HP outboard moving Delos along at 2 knots.  Not speedy by any means but we were making half a knot good into the current so we were happy and out of immediate danger.

But this brings us to the real problem.   An inspection of the main revealed a coolant leak somewhere on the front of the engine, ominously close to where the water pump is.  It’s not anything so trivial as a bad hose or loose clamp.  Nope, it’s one of those ones where you need to dissemble a good chunk of the engine to get a proper look.  I considered digging in and going for it but changed my mind.  It’s just not worth the risk.  There is a chance that I could fix the leak, but maybe even a bigger chance that I won’t have the required part or even worse I break it completely and now we’re really screwed.  At least now we can fill her up with water and get a few minutes of running time before everything leaks out.  This could be enough to get us out of a dangerous situation if need be.  So I think we will need to wait until Davao, Philippines where there is a marina and I can tear the diesel apart while tied to a dock.

We’ve spent the last four days bobbing and drifting our way across the Maluku Sea, which separates Raja Ampat from the Maluku Islands and Ternate, which will be our final port in Indonesia.  The 280 mile sail would normally take about a day and a half but these conditions call for much more patience.  I think our average speed has been somewhere between 2 and 3 knots, and often much slower. 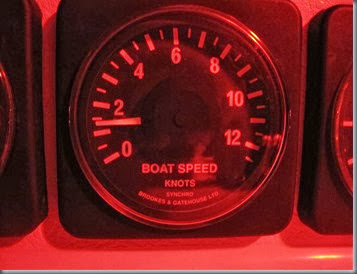 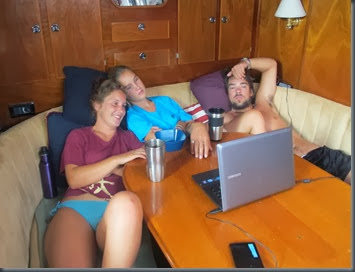 Slow sailing and calm seas means lot’s of movies for the crew!

Seriously- you can walk to the bow, spit in the water, grab a quick snack, and still make it to the stern in time to see your spit bubbles pass by.  We got passed by a canoe paddling the other day.  Just yesterday we were in a particularly trying spot.  The wind was being fickle as usual giving us 5 knots, then 3 knots, then 2 knots from a different direction screwing up our perfectly trimmed sails.  We had spent the entire day navigating a channel so we could make our turn and head North towards Ternate.  The ETA on the NAV computer went from 1 day, to 3 days, to 40 days, to NEVER.  It’s pretty heartbreaking to think you’ll NEVER reach your destination.  Apparently the current had turned against us and we were now sailing backwards, losing all the hard fought miles from that days sailing.

Too deep to anchor; nothing to do except wait for the current to change direction again and help us around the corner.  I looked at the chart and the name of the strait made me smile.  Serat Patiente.  Serat means “Strait” in Indonesian.  The Strait of Patience.  How fitting. 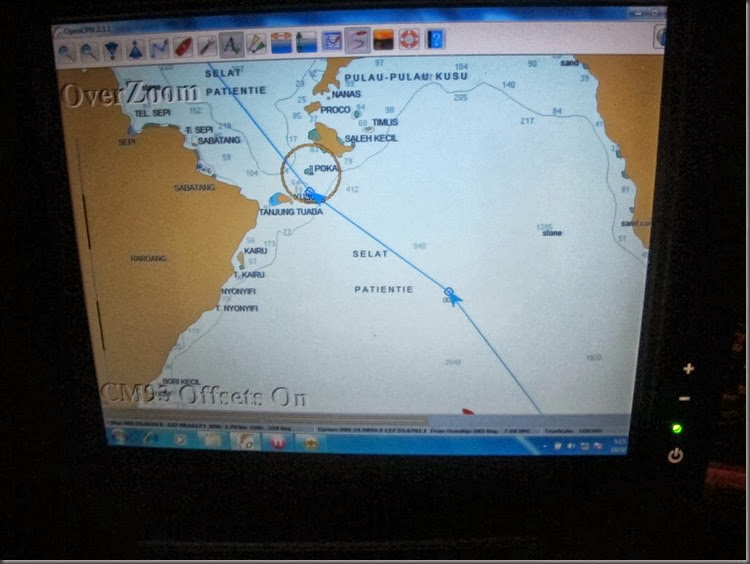 The Strait of Patience, where we spent a good amount of time sailing backwards.

The low winds and calm seas have given us some really cool experiences though.  Just the other day we were enjoying a bowl of Ice Cream when suddenly a pod of whales blew so close to Delos I instinctively covered my bowl.  Ice Cream is hard to come by out here, and it would be a shame to ruin it with whale snot.  If you’re a cruiser reading this you may wonder where we found ice cream.  Well, at the Saga Market in Sorong we found a box that appeared to be ice cream mix.  The front was covered with smiling children enjoying delicious looking chocolate chip so how could we go wrong?  Simply just mix the mysterious contents with water (or milk for a creamier variety), and stick in the freezer for a few hours.  And it actually worked and was delicious!  The only problem is the back warns of harm to your fetus if you eat the whole box.  One serving only!  What the hell is in this stuff?

Anyway this is the closest encounter with whales we’ve ever had.  So close you could smell the fish on their breath.  I’ll need to inspect the bottom paint to see if they actually rubbed against us.  They blew and surfaced a few more times a few feet off our stern and we got an amazing view of these massive creatures.  We were a little shocked and paralyzed at the same time so no photos.

We also broke a new record for dolphin sightings in a single afternoon.  Just amazing amounts of dolphins with some pods surrounding us with 100’s of members!  The mirror-smooth seas made for some sweet swimming action shots. 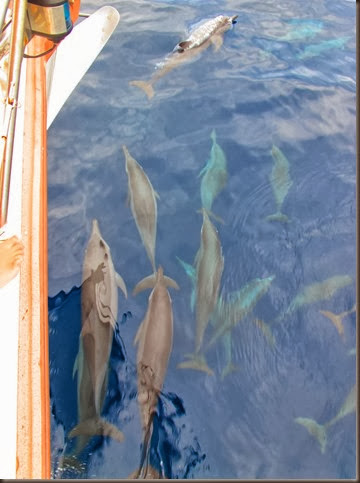 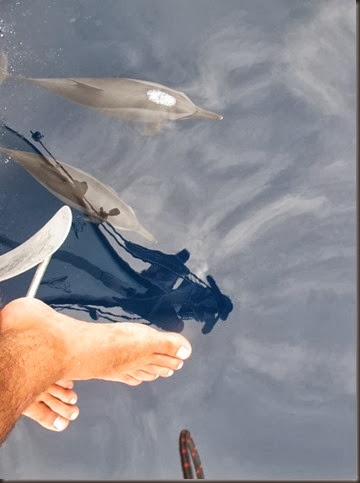 Delos surrounded by a MASSIVE pod of Dolphins!

Ternate has been in our sights since last night and according to the radar is getting closer but I’ll believe it when we get the hook down.  We’ve been 12 miles away for ages now.  Only another 500 miles to Davao! 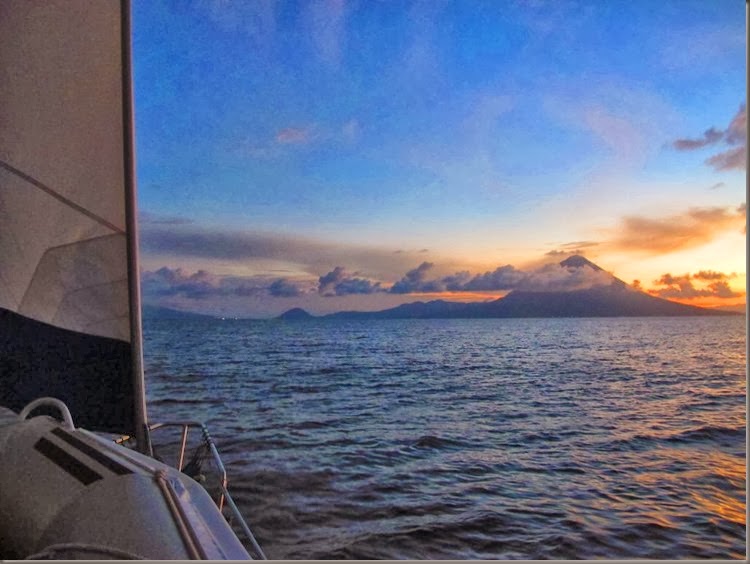 Ternate Looming on the horizon in the early morning light.