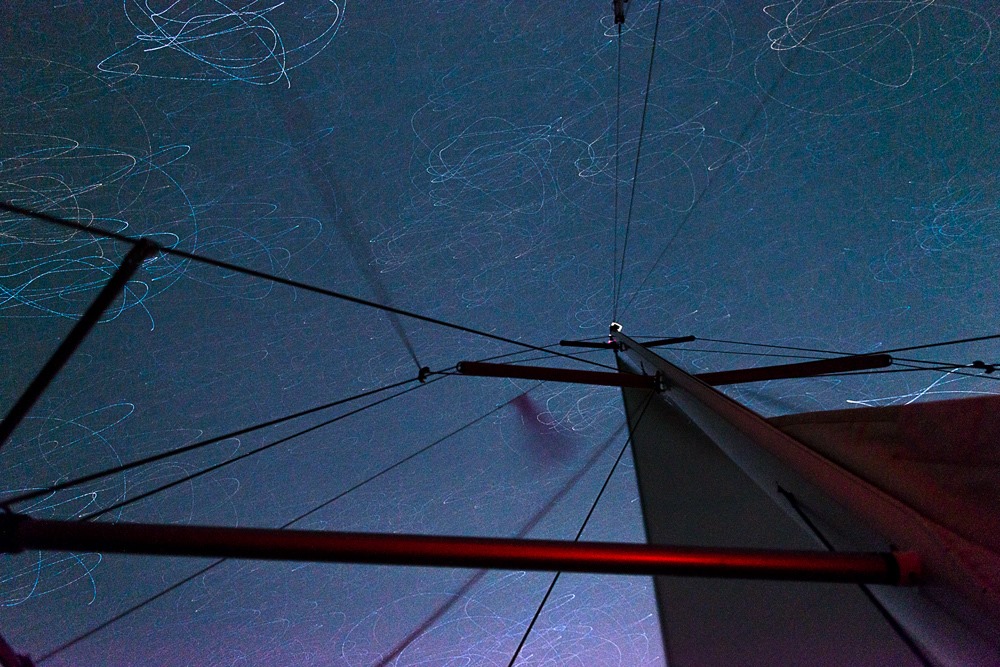 I sigh as my alarm goes off under my pillow, my headphones wrapping around my neck as I fumble to switch it off before it wakes anyone else up. It’s 11:45pm and my night shift on the second day of passage is about to start. I always give myself fifteen minutes before to get myself sorted.

Freeing my neck from my headphones, I swing my legs over my bunk and wait for a roll of the boat backwards before I jump down. I’ve jumped down many times when the boat has been rolling just to land into the table.

You learn quickly on Delos.

The nights have been chillier on Delos so I pull on a pair of joggers, my tartan shirt and wrap myself in my poncho. I then fill up a bottle of water, make a coffee and stuff an apple in my pocket in case I get the munchies.

Coffee? I hear you say.

Yes. I’m afraid I am currently on a tea ban. I agreed with Karin that I would give up tea on passage- just to prove to her that I could.

“Elizabeth, if you do that, I will see you as a completely different person,” she said.

Stubbornness got the better of me as I agreed to give up one of my biggest pleasures.

Fastening the lid to my coffee flask, I grabbed my phone for music as I walked up into the cockpit. Brady was sitting before the wheel, his head stuck out of the roof as he gazed at the stars.

“Good evening, darling!” I announced in a posh English accent.

“Oh! Good evening!” he answered, sitting down. “Did you have a good rest?”

“I did thanks, buddy,” I said, popping my coffee and water in the holders. “So how’s it been this evening?”

“It’s been perfect, Liz- perfect sailing conditions. We’ve had a few squalls, but apart from that it’s been a beautiful night.”

“Alrighty. Have a good watch!”

“Have a good sleep, sweetheart!”

I sit before the wheel and watch as he scuttles off down below to write in the log book at the navigation desk. The red light on is above his head, casting him some sort of devilish glow as he records his watch. He turns with a final wave and heads back into his cabin.

Taking the wheel, I gain control back to the 260/270 degree mark, take a breath and stand up.

The skies overwhelm me instantly as Delos courses through the black waters of the ocean. Stars burst from behind clouds, the Milky Way dusting across the horizon and stretching over my head. I crane my neck backwards to look until the sails start to flap and I realise I need to sail more to starboard.

I spend the night like that, sitting down occasionally when a squall appears or to take a sip from my coffee. I check radar and see more of the kind surrounding Delos and check our course. We’re going at about 7/8 knots still and making good time. I spend time thinking, daydreaming and falling into other worlds again.

And I breathe a sigh of relief.

Each night watch is the same. I have the same thoughts, sometimes in a different order. I replay the same scenarios in my head, excited when I think of a new one.

And sometimes I worry. I worry about things not turning out the way I want. But that’s what makes hope even more precious.

Because I have a lot of it.

I shift my balance as the boat sways hard with a large swell, crying out in surprise as the wave smashes against the side and soaks my hair through the hatch. I refuse to sit down though- I’m having far too much fun and I want to see whether I can sail by the stars.

It turns out feeling like the most natural thing in the world, focusing on a particular bright light and steering Delos true towards it. I finally feel like a real sailor. Sure, I’m still learning ropes, sails and all that jazz- but there in that moment, I felt capable.

I sit down to check radar, finding a few squalls upon the horizon like Brady had mentioned. I’m prepared when one hits, feeling the rain drizzle down briefly as the wind changes direction erratically. I take the time to sit down, relax, drink my coffee and steer whilst listening to music.

I sit there for a while lost in my thoughts, snuggled up in my seat surrounded by cushions and I glance out ahead.

I freeze in my seat.

I’m seeing something I can’t quite grasp. Can’t quite believe in.

As a writer, I can imagine a lot of different scenarios, places, objects and landscapes. But I could never have imagined what I saw that night.

I sit up straighter, forcing my eyes to stay ahead. I think maybe I’m seeing things but after a few seconds pass I know I’m not. I stand, fumbling to put my coffee back in the holder.

A huge semi-circle engulfs the sky before Delos. It glows with a bright white light and I have to blink several times until I can believe I am actually seeing this thing in the sky.

“What on earth?” I gasp, grabbing the camera. But night vision won’t capture it. Nothing can capture it. I laugh as I stare at the white half sphere ahead of me, the light rain drizzling down on me as the waves crash against Delos.

“It’s a rainbow!” I exclaim into the sky. “It’s a bloody night rainbow!”

The light radiated completely through the inner archway, making it appear like it was a mammoth white doorway to another world. It was unlike any other rainbow I had ever seen, the colours ever so softly gleaming through the mass of white and silver.

I stared at it for as long as I could, afraid to look away in case it disappeared. I wanted to shout down to the rest of the crew to wake up and see what I was seeing. But to wake everyone in the dead of night for a rainbow that may disappear at any moment?

They would think I’m insane.

“They’ll never believe me…” I murmured, unable to stop grinning.

I could only gather that with the rain that evening and the moon being so bright, a night rainbow had been created. It was the only explanation I could think of- other than it being the Universe sharing yet another amazing experience with me. I hadn’t even know that sort of thing was possible or even existed and I knew no one who had ever seen one.

It shone brightly before me, alive with the sort of life that only could be created by Mother Nature. This was real. This was before my eyes. This creation of night sky and moonlight. This vision of stars, mist and shape. This white fire before me that rippled in the sky softly, earnestly as though pleading with me to come towards it, to bow my head beneath the archway and be taken to another place.

I watched it slowly fade away, my eyes never leaving the spot in the sky where it had first appeared until it was completely gone, dissolved and absorbed back into the heavens.

I sat back into my seat woodenly.

My hands fixed on the wheel as I wondered whether I’d see anything like that again in my lifetime.

At 2am Brian came to swap over and I told him everything I had seen in a rush of breath. He blinked back blearily at me, his hair still mussed from sleep.

There was no argument, no nothing at what I saw. But I couldn’t help but wish he had seen it with me. That everyone had. Because then I feel as though the magnitude of what I was describing would have hit everyone’s hearts.

I exchanged details of the night, went back below into the belly of Delos and wrote in the log book of what I had experienced, drawing a little picture of a rainbow surrounded by stars beneath.

I wrapped the covers around my shoulder that night with a wide sleepy smile on my face.

Wow. What an incredible night watch.

Living in the lounge, I hear people come and go on their watches, making snacks, discussing their watches and going to the toilet. I hear Lisa take over from Brian and I drift back to sleep.

Because I hear so much from everyone else during the night, I usually stick my headphones in and play a bit of music to help me drift off to sleep. I had been asleep for two and a half hours when I woke up to find my playlist still going on and switched it off.

That was when I heard her.

I sat up, swung my legs over and jumped out of bed instantly. Pulling on my poncho around my shoulders I saw Lisa peering down from the cockpit with a hand over her face.

“Please! Can you steer?”

“Yes of course!” I jumped up the stairs and grabbed the wheel, first thinking that she had a nose bleed. She darted away from the chair and jumped from the cockpit and hung over the railings.

Where she promptly threw up.

“Oh…” I watched as she coughed and spewed, trying to focus on the compass and keep an eye on her to make sure a rogue wave didn’t crash over the side and carry her away.

She returned shortly and shook her head.

“Do you want me to stay with you for a bit?” I asked. It was 4:30am but I didn’t want to leave her. I knew sea sickness sucked and didn’t like the thought of anyone experiencing it on Delos.

She nodded and I swapped seats with her.

Making herself last another half an hour, I insisted she went back to bed, but not before she ran to the railings again to throw up.

And indeed she did. At 5am, she went back to her bunk and I took over the last hour of her watch.

I was happy to, to be honest. I was on a high and had told her all about what I had seen.

Karin soon came to take over from Lisa, blinking in surprise at the sight of me. I explained that Lisa was sick to Karin’s concern.

“Oh man that sucks!” she said, taking the wheel. She bid me a goodnight and I trotted back to my bunk, feeling now quite exhausted.

Remembering to fill out Lisa’s log for her, I jumped back into my bed and sighed.

It was a good feeling to be finally moving. It had been an incredible night watch and I couldn’t wait to tell the rest of the crew of what I had seen.

My eyes started to drift shut, the image of the night rainbow still bright in my mind as sleep finally took over.