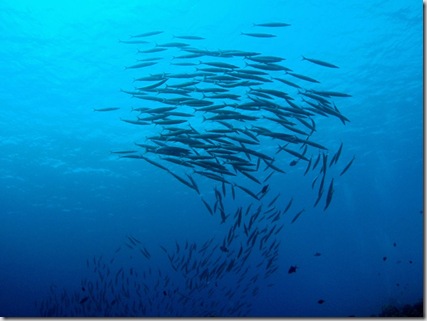 Bora Bora is world famous for its reputation as a honeymoon retreat.  There are beautiful resorts everywhere, most of which have bungalows propped right over the crystal clear lagoon water.  It is much different seeing this island from a sailboat though.  You don’t have a concierge at your fingertips; you are on your own, apart from a few guide books we have, when it comes to finding things to do and see.  Surprisingly it is a great place to come for some adventure.  Some of the best diving and hiking we have done have been here. 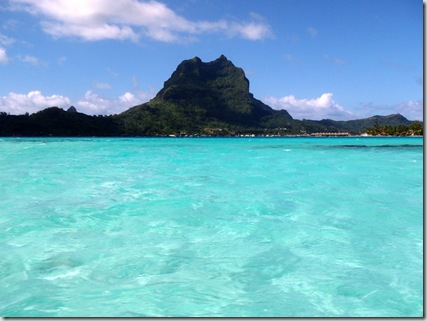 Mt. Otemanu sharply rises out of the blue lagoon water to 2,200 feet.  Before coming here we heard it was a great hike to the top and the reward is a 360 degree view of the entire island and surrounding reef.  After being in Bora Bora for a few days we decided to attempt the hike.  Our friends on Bubbles had done it the day before and said it was intense.  It took them about 3 hours of climbing up serious cliffs and rocks, some of which you need a rope to pull your self up.  Brad, Kat, Jay, Brian and I got up at around 5:30 a.m. to try and get the hike in before the sun got too hot.  Unfortunately it had been raining all night and there were still clouds hovering above the peak.  Of course we knew it would be a little muddy but we decided to go anyway.  Alex drew us some sort of map and directions to the beginning of the trail.  It went something like; “go into town, take the dirt road between the pearl shop and the café, pass a bunch of houses and a basketball court, turn at a dead end and head into the thick brush where three rocks are stacked on top of each other”.  We ended up in head high weeds trying to walk our way towards the mountain.  We came to a pretty serious cliff face and started climbing. 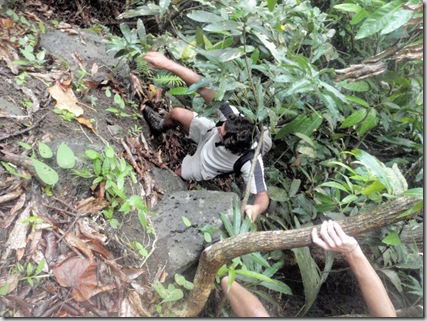 I guess we thought as long as we keep heading up we will run into the trail eventually.  Luck was on our side and we did find the trail, marked by a tree with some caution tape wrapped around it.  Alex wasn’t kidding; we were hiking up a 45 degree incline and using ropes at some points to pull ourselves up.  Like I said before it had been raining so there was mud everywhere making it tricky to keep traction. This went on for about 2 hours until finally came to a peak where you could see most of the bay. 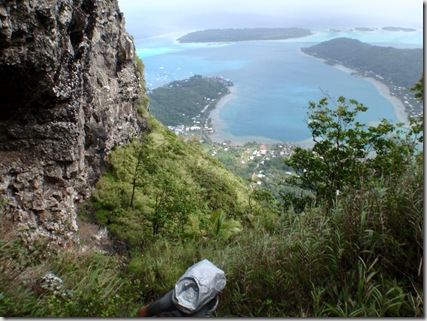 It was only one more push to the top of the peak.  In all it took us about 2 ½ hours once we were on the trail.  This was the most strenuous yet amazing hike I’ve ever done.  We hung out at the top, ate some lunch and took in the view for a while before starting the trek back down.  You could even see Delos anchored off the Motu. 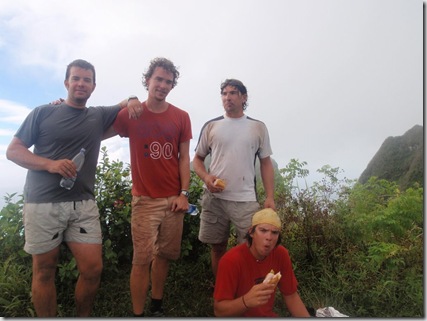 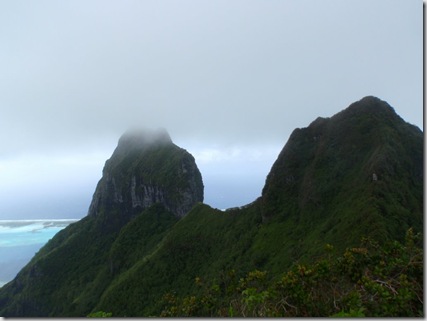 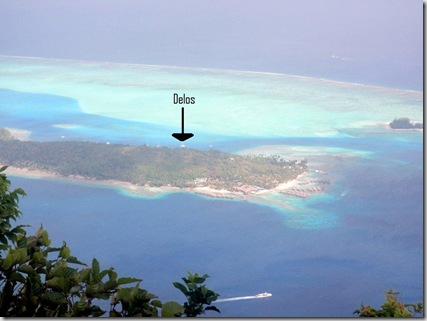 Turns out going down a mud covered mountain is much harder then going up it.  Kat, Brad, and Jay went first and got a little bit of a lead when Brian and I found ourselves at the top of a cliff face that we definitely didn’t come up.  We went the wrong way for some time but eventually made it back to the trail and down safely.  Brian and I slid a lot of the way down, sometimes even getting too much speed and sliding into trees which I seemed to do quite often. 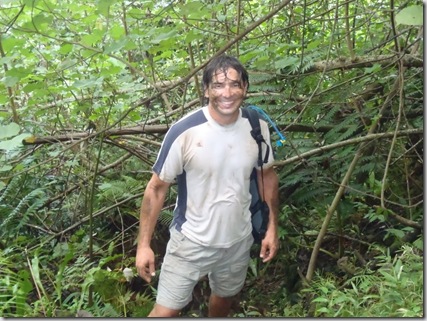 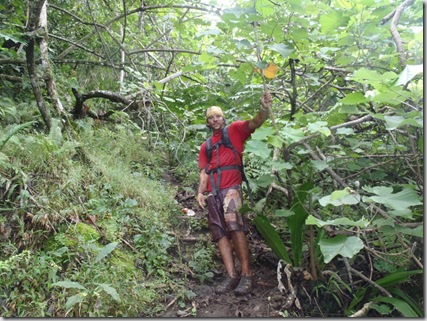 The whole next day we didn’t do much.  All of us were really sore so we rested up to do a dive the next day.

Our favorite dive of Bora Bora was just on the South side of the pass. There are 5 or 6 buoys where local dive boats tie up.  We had already done two dives at this site and saw a few lemon sharks, black tip reef sharks and tons of beautiful fish so Brian and I couldn’t pass up the opportunity to dive there again.  We headed out for the 20 minute dinghy ride with some Australian friends we met off of S/V Sun Boy.  As we got in the water we could see at least 10 black tips from the surface right under our dinghy. 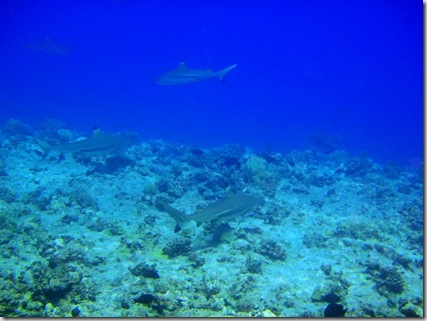 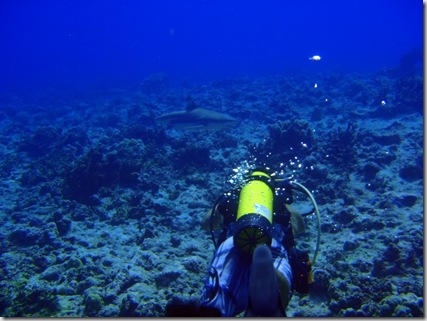 Brian and I wanted to go a bit deeper so we separated from the group and headed for the coral drop off. 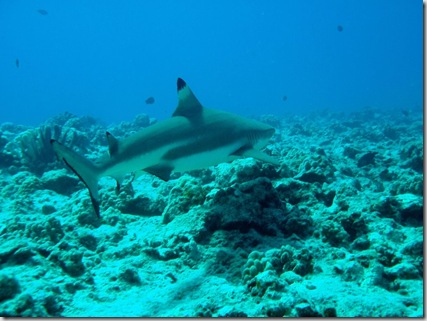 At around 70 feet the monsters came out.  It started with 2 lemon sharks then there were 5 or 6 just circling around us.  We kept swimming right through their circling pattern and got with in arms reach of them.  It is such an amazing sight seeing these sharks up close, swimming so effortlessly and smiling at us with jagged saw-like teeth.  These were the biggest we have seen and all ranged from 10 to 13 ft. 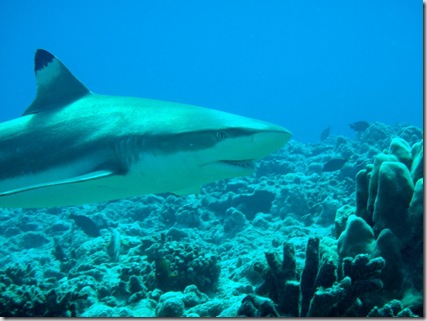 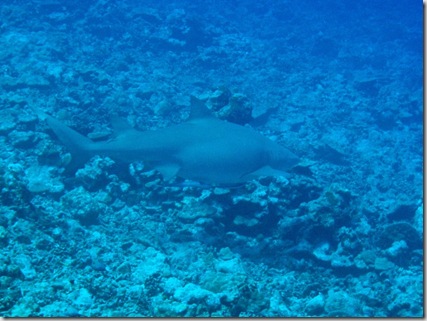 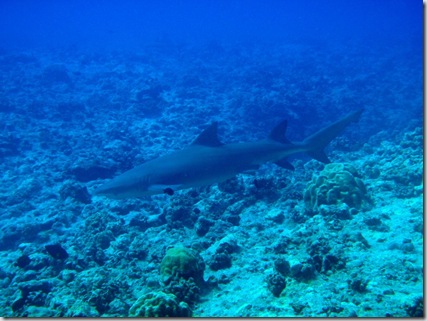 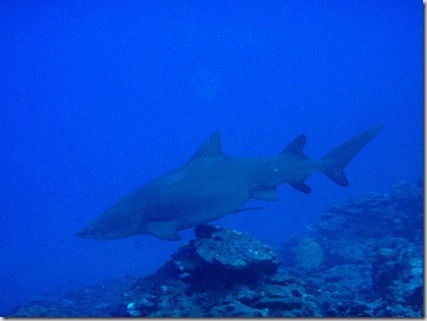 In general these sharks are not dangerous unless you’re spear fishing or bleeding profusely so we felt ok to continue with the dive.  We got to 145 feet and got good and narced before we started our ascent back to the shallow coral to off gas some nitrogen in our blood.  The sharks had lost interest and left by that time but our adrenaline was still flowing as we ended another great dive. 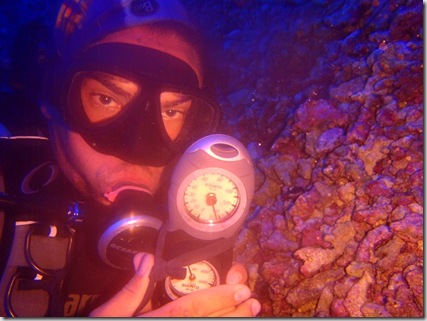 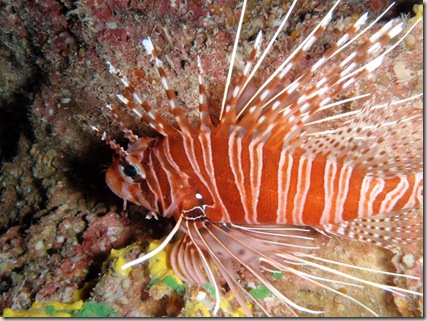 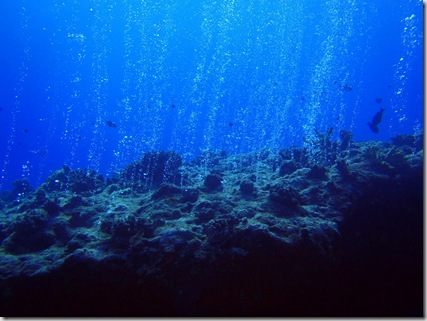 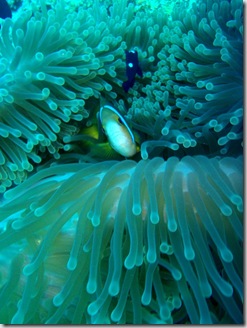