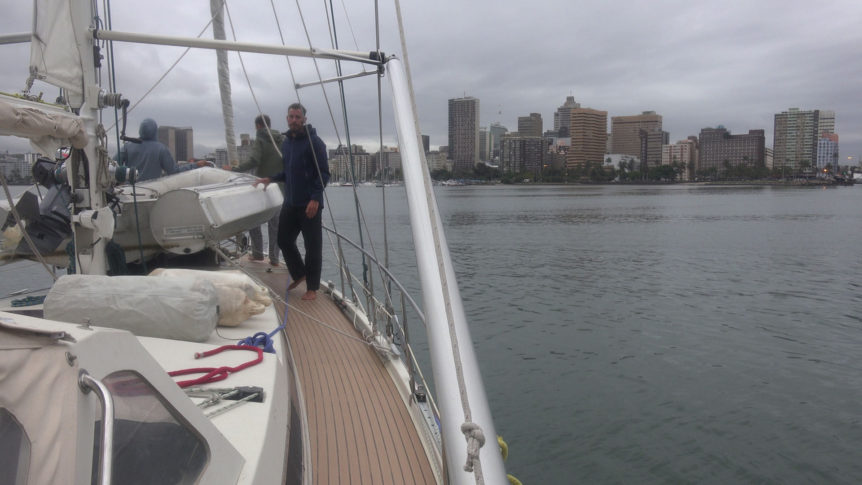 0300- Another wind shift wakes me.  The wind goes slack and seems to be toying with us.  Never content long enough to make much progress.  Delos slams around uncomfortably until Brady starts the engine and we make a little forward progress.  Yuck, it’s gonna be another one of those days.

0600- I’m on watch now and it’s a grey, cloudy day that threatens of rain. It’s actually cold and for the first time in 6 months I need to put on a sweater.  Not much going on watch wise, we pass about 20 miles off of Richards Bay and I can see the cargo ships in the outer anchorage on radar. We’re getting close, only 90 more miles to go!

1100- It starts raining and the wind swings through 180 degrees.  Backwinds the sails and it’s not very fun.  Karin is on watch and I help her furl in the genoa, we’ll just motor until it settles out.

1500- Still motoring, the wind hasn’t developed like it was supposed to.  Oh well, I suppose that’s better than having it against us.  The one thing is we do have current against us now.  How could that be?  In what’s supposed to be the best place for current we have a knot against us.  We’re all convinced that nature is conspiring against us at this point.  But, only 30 miles to go now.  If we can maintain 6 knots that puts us in right after sunset. Fingers are crossed!

1530- Land Ho!!!!  We spot the African continent!  Oh man it never gets old seeing land after being at sea for so long.  In a split moment all the adverse wind and weather disappear from your mind. You come to the realization that you are nearly there.

1700- We are about 3 miles from the Port Of Durban and I hail them on channel 09 to notify of our arrival.  They respond right away and ask give us permission to enter the port.  SWEEET!  We’re asked to call again when we enter the breakwater.

1730- The city of Durban looms on the horizon and it is MASSIVE!  It’s been so long since we’ve seen anything bigger than a bamboo hut, and here tall buildings loom on the beach like something from a crazy sci-fi novel.  We contact port control again and they say shipping traffic is quiet, come right on in!  In fact, they are super nice and really helpful.  The man in the tower has us in sight and asks if we’re ever been in the port.  When we answer no he says, “No problem, I’ll guide you.”  He gives us step by step instructions and says he’ll follow our progress.  A few minutes later we get another call saying we’re looking good, and to proceed straight ahead to the Durban marina which should be just off our bow now.  People always surprise me with their friendliness.  You think he would have something more to do then worry about a little white sailboat coming into his massive shipping harbor put for some reason he pays a lot of attention to us and it’s very comforting.

1745- We approach the marina and I see a boat on AIS with Capn’ Fatty on the boat name.  It’s anchored out before the marina and I think back to the days when I used to read cruising world magazine, dreaming of setting sail.  I remember Captain Fatty wrote an article in there.  I wonder if it’s the same guy or just a coincidence.  Pretty cool if it’s actually him, would be awesome to chat with such a legend.

1800- We are just backing into our slip when Port Control calls again to ask if we got a slip okay.  Too cool for him to check up on us again.  The people here seem really nice.

2000- We head up the dock for a quick burger and beer at the yacht club. Technically we shouldn’t leave the boat but we aren’t venturing far, and I’m pretty sure we can talk our way out of it since we just arrived that night if any immigration are lurking.  All goes well and we crash back on Delos early and sleep through the ENTIRE NIGHT.  No sail changes, no watches.  And it’s awesome ?

0600- Awake bright and early with the sun.  The marina doesn’t open until 0800 so we mill around with nothing much to do.

0800- The marina finally opens and we get in contact with Immigration.  They are super chill and since it’s the weekend we are asked to walk to the immigration and customs.  We arrive and are behind a cargo ship clearing in. I see Russians, Phillipinos, and a few other nationalities.  When our turn comes up the official is super nice, stamps our passports with no problems and gives us a huge smile.  “Welcome To South Africa!”  It takes about 5 minutes.  The same thing with customs.  He’s listening to Reggae and chilling with his feet up on his desk.  It’s just us and him.  “Nice music man!” Says Brady as an Ice Breaker.  A Bob Marley tune is drifting out from his computer.  “Yeah man, it’s the weekend.” he says with a huge smile.  He stamps our form, gives us another huge smile and says “Welcome To South Africa!”  Super friendly, super easy.  Probably one of the quickest and easiest check-in’s we’ve ever had.  We head to the Kwik Spar for a snack then to the yacht club for long hot showers and beers.  Carmen Gee (crew from Cape Town to La Reunion) meets us and is taking us for Bunny Chow later. We have our local guide hooked up now and life is good.

Thanks for following the daily blog everyone, it was a lot of fun to do.  I hope it gave you a little glimpse into the daily routine of Delos on passage, although the weather was way more finicky than usual.

Peace and Love to you all.  -Brian