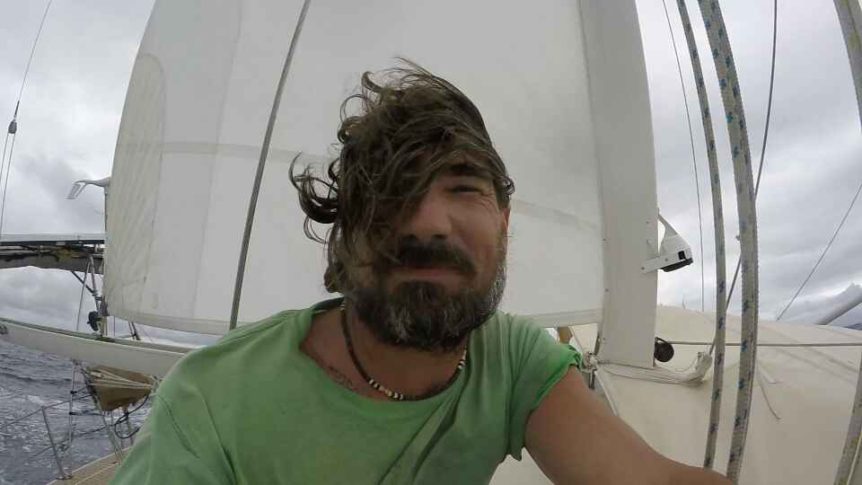 0400- Wake up to dark skies and light breeze. We have sailed for a good part of the night which is nice. Surprisingly I’m not very tired even though I stayed up last night to watch a very weird movie called “Cell” with John Cusack. Sort of a modern twist on your typical zombie apocalypse thriller. Interesting.

0530- The wind dies and leaves Delos wallowing about with sails flapping. Bummer. Furl in the genoa and leave the main and mizzen up to try and stabilize us. Start the trusty Volvo and start motoring. Maputo is less than 100 miles away now so getting closer.

0600- My watch ends and Karin takes over. I head back to bed for a few more hours of snoozing. 1000- Wake up and have the normal coffee and muesli for breakfast. Decide to do a few hours of reading in the cockpit. A bird joined us in Bassas Da India a few days ago and he’s hitchhiked a ride from us ever since. I see him scurry on the foredeck seeking shelter from the sun. I sure hope he hangs on until we see land again. I decide to get some work done and do some editing. A few hours fly by but I’m making great progress on my Madagascar footage. Lunch is left over curry hybrid from last night. Why is it always even better on the 2nd day?

1300- Motoring, motoring, motoring. Then suddenly I hear the wind generator kick on and there’s enough to sail! Yeah, the engine goes off and Delos immediately stabilizes. We still have some current against us but at least we’re on course and not burning our precious fuel. Brady downloads the latest weather forecast and it looks like things have changed in our favor. The nasty low coming has been pushed aside by a relatively stable high pressure system. This means the wind will be maybe 20-25 out of the south for less than a day which is something we can deal with. If we head into Maputo we will most likely need to stay there for 5 days given the systems coming around the cape. If we change course and head due south from our current position, we can then turn West when the southerlies come. After a few minutes of debating pros and cons we decide to turn south immediately and keep our sea room off the coast, about 100 miles as of right now. If we plan it right we can ride out the southerlies on our port tack approaching the coast, then bare away when they switch to northerly. At which point we should be very close to Durban. If the forecast holds steadily over 8 knots. We also are in the good current now giving us speed over the ground between 9 and 10 knots. Awesome! If this holds for even a day at this speed we will be passing Richards Bay, 190 miles to our south. Durban is another 90 miles south of that. So if things look bad we can bail to Richards Bay to wait out weather. Hopefully it holds and the southerlies don’t knock us around too badly.

2200- Watch time again. The breeze is still holding but has definitely diminished. By the end of my watch at 2400 it’s switched from NE to N, and now NW then almost dropped to nothing. This sucks because there are still pretty big swells coming on the NE and now no wind to stabilize it. The genoa bangs back and forth, snapping from back winded to full. It’s probably the most annoying thing because there’s really nothing you can do to help. The boat isn’t steady, she rolls and pitches and bangs as the swells smack her from all over the place. Oh how short lived were our perfect sailing conditions. It’s Karin’s watch now and I decide to help her put up the pole and gybe to the other tack. There is now 10 knots out of the NW and this helps a little bit. Delos is now making 5 knots at least and not banging around so badly with the pole to hold out the genoa. We expect the breeze to swing all the way around to the South and then finally South East tomorrow. We have made good on our Easting, so have some room to play with off the coast when the South East winds kick in.