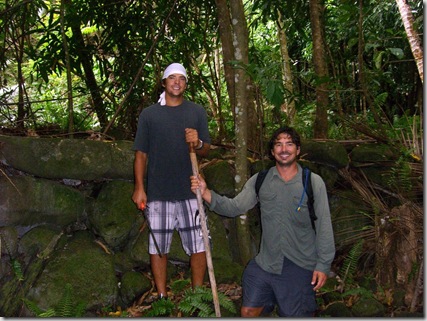 On the passage from Mexico to the Marquesas I read two books by Thor Hyerdahl (Fatu Hiva and Kon Tiki). In the 1930’sThor and his wife Liv left Norway and took passage to the Marquesas with the intention of finding an island where they could live outside the bounds of the civilized world- a place where they could live off the land as the natives had for thousands of years. They chose the island of Fatu Hiva, known for it’s abundance of fruit and fresh water. In Fatu Hiva Thor detailed his account of their year spent on the island. They lived in a hut the natives helped them build, ate fruit from the hillsides, and caught fresh water shrimp in the mountain streams. They settled in the hills above a village called Omoa.

Having just read their account we were excited to set off in search of the places mentioned in the book, most notably the large petroglyphs that fueled Thor’s controversial theory that the South Pacific was populated from South America, not SE Asia as most others believed. Omoa was a 30 minute dinghy ride down the coast so we set off on a calm day to check it out. The ocean was smooth and we had an easy ride tying up at the village dock. 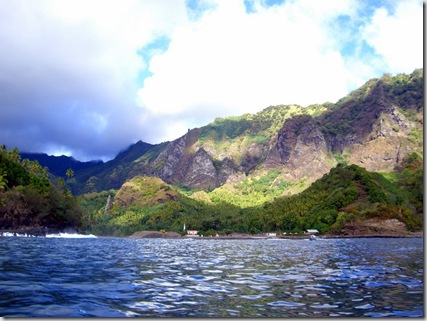 After inquiring about the petroglyphs in the local magazin (store) the proprietor walked across the street and roused her son off the couch to be our local guide. He wasn’t happy at the prospect and didn’t say much as he led us on a winding path into the jungle, our guide huffing and puffing as the trail grew steeper. Surprisingly we were in much better shape than our guide of about 14 years old. Unfortunately it looked like the TV remote and constant supply of junk food from the magazin had gotten the better of him. We passed through a pig farm then began to trek into the hills above the village. We wound our way around countless fruit trees including star fruit, mango, papaya, pistache (small bitter-sweet grape like fruit) and of course breadfruit and pamplemousse. After crossing a few ravines our guide pointed to a large rock in the middle of a clearing in the jungle. 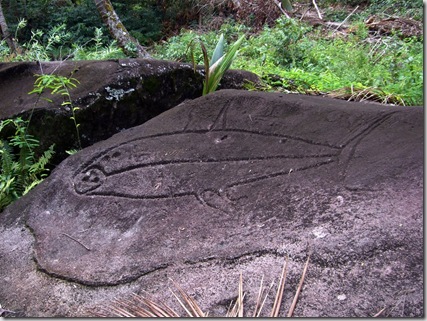 The petroglyph was plainly visible exactly as Thor had described it with as a large fish surrounded by concentric circles. We spent a few minutes exploring the other smaller petroglyphs on the surrounding boulders and pictured a native diligently chiseling away with his rudimentary tools. 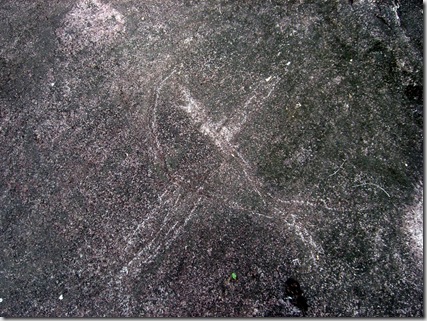 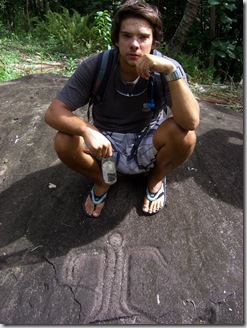 After a little rest our guide let us know in French that it was customary for tourists to pay to see the petroglyphs. I asked him how much and he said 2,000 francs, just over $20.00. We thought this was a little steep especially since neither he or his mom had mentioned anything before. I offered him 500 francs and he accepted with an embarrassed smile. He loosened up right after this- even smiling a few times. On the walk back down the hill he took time to tell us the Marquesan words for all the fruit we were passing, even insisting that we try a few pieces as we went. 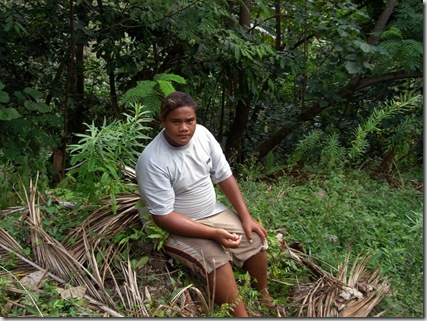 On the dinghy ride back to Hanavave we spotted an interesting looking beach with a small sand patch just large enough to land the dinghy. We wound our way through boulders and breaking waves to make a successful yet wet landing. The jungle began at the edge of the beach and looked foreboding and impenetrable. Even with our machetes it looked impossible to get any further until we boulder hopped down the beach and stumbled across a dry creek bed giving us a small break into the valley. After following the creek inland for 1/4 mile we started to notice piles of stone, then walls, then pei-pei platforms. 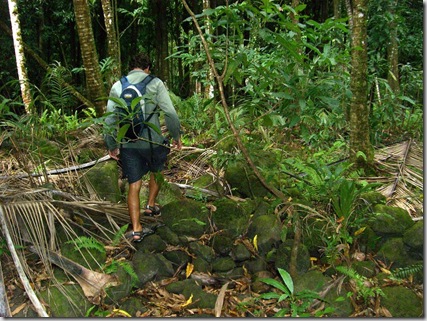 Feeling like Indiana Jones we explored the ruins of the ancient village. Everything was overgrown as the jungle worked to reclaim the land. If I were back at home I would have recommended for them to look for something like a forestry mulcher for sale to tidy it up, but this is the jungle and chaos is very fitting for this environment. The ruins were extensive including stone paths, garden terraces, walles, and the hugest pei-pei’s we’d seen so far. The jungle floor was littered with rotting fruit as the trees produced their constant abundance. With no one to consume natures bounty it was left to rot. This ancient village was large enough for hundreds of inhabitants and was elaborate in it’s layout. 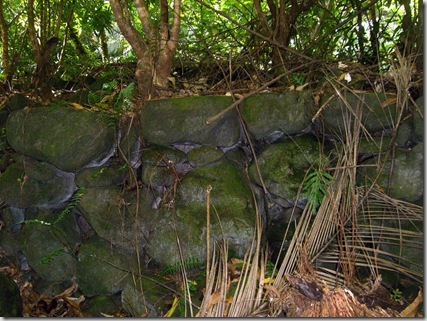 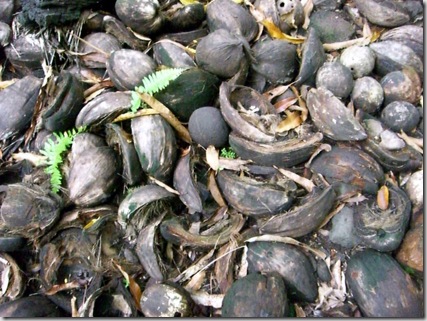 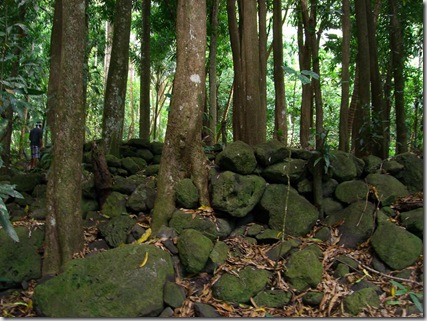 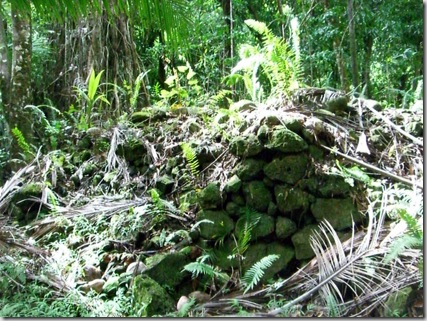 We wondered when the last time anyone visited this site. There are no roads leading into the valley and the ruins aren’t mentioned in any guide books. We doubt this valley gets many tourists.

Prior to European contact the population of the Marquesas was estimated at between 60,000 and 100,000 natives. During the 18th and 19th centuries clashes with Europeans and the diseases they brought with them wreaked havoc on the natives reducing their number to a sparse 2,000 inhabitants. With such a significant population decrease it’s no wonder why deserted villages such as this exist. Each time we meet a Marquesan I can’t help but think that they are here because their ancestors somehow survived.