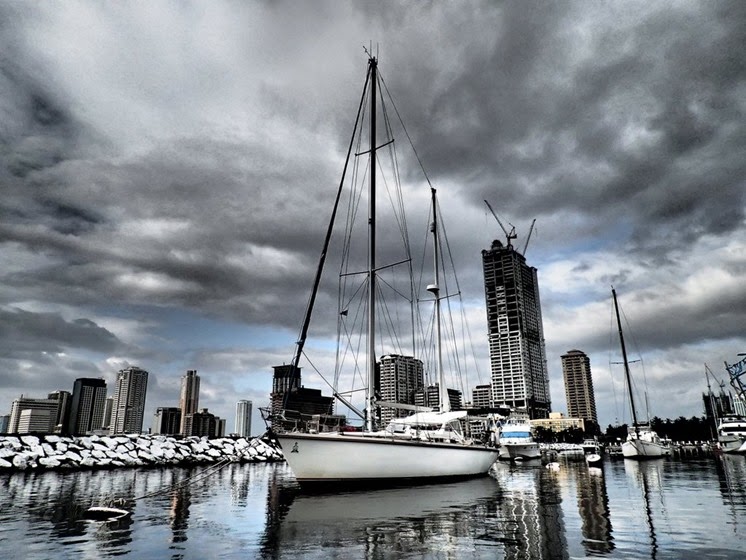 Manila gets mixed reviews from most people. Fellow cruisers, travel guides, and even locals all have varying opinions. Undeniably there’s a certain pull though, to seeing the capitol city of the Philippines. The beating heart of this nation of 100,000 million people. The metro Manila population (according to the last census) is around 12,000,000 people. The Greater Manila Area was 25.5 million as of 2010! Can you imagine that? It’s like the entire population of Australia and New Zealand in one monster metro area. But on an island…..

The whole concept sounds both terrifying and exciting at the same time. In a snap decision we decided to leave our lovely little anchorage in secluded Puerto Galera and sail to The Big City for my birthday weekend – a decision slightly informed when we found these gorgeous Apartments for rent in BGC Manila. The winds were light but we had a peaceful overnight sail, arriving into Manila Bay at the crack of dawn. We relied heavily on Radar, AIS, and our trusty binoculars to avoid the maze of fishing boats, nets, traps, buoys, and cargo ships. 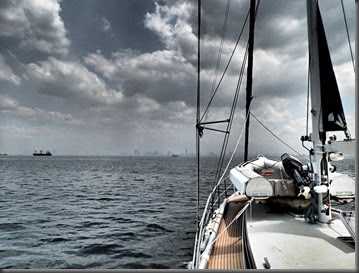 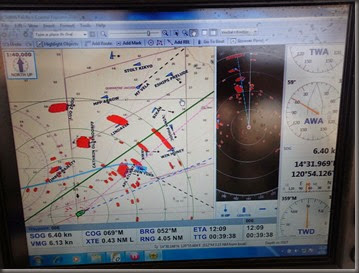 Manila harbor is big, filled with sunken wrecks, strange floating debris, and dangerous characters so it’s not a “cruisy” place to anchor. The only real option is the Manila Yacht Club tucked into the SE corner of the bay. I don’t think they get many cruising boats here and we got extra special attention and friendliness where ever we turned. A service boat raced out to help us to the mooring field. The armed guards made it a point of helping us to tie up our dinghy, carried our trash, and snappily saluted us whenever we walked past. I don’t know if I’m salute worthy but it was a fun experience. This certainly wouldn’t happen at the Seattle Yacht Club. 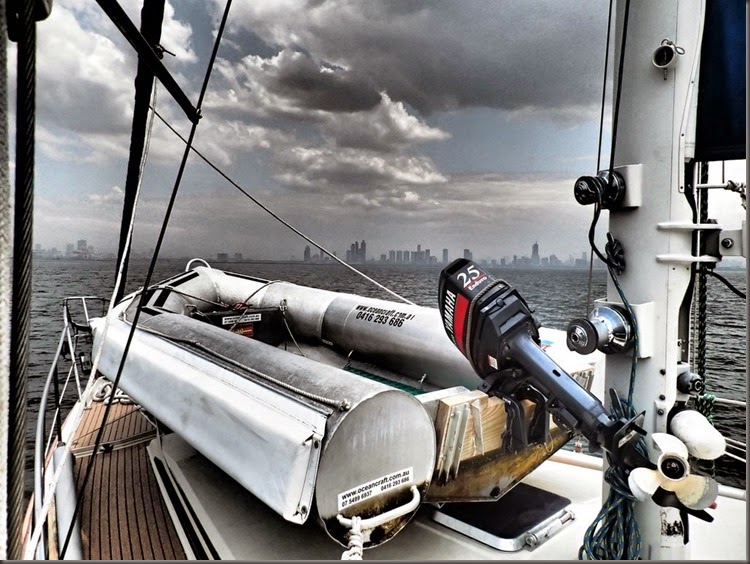 From our experience it seems the Manila Yacht Club is more of a playground for Manila’s wealthiest citizens and prominent politicians than a center for yachting. A sort of who’s who club where you take someone to impress with a fancy lunch and talk about your yacht (which actually never sails anywhere). It’s definitely not a cruiser yacht club. The restaurant is fancy, food looks delicious, and the shower facilities are second only to our favorites on Hamilton Island in Australia. This does come at a price though- it was about 11,000 pesos to keep Delos on a swing mooring ($250 USD) for the week. This is about what you’d expect for a powered slip in Australia or Seattle. And here it’s just a swing mooring. In more remote parts of the Philippines it was 1,000 pesos ($20UD) for a month. But it’s always location, location, location and the Manila Yacht Club is right in the center of everything, and with armed guards constantly patrolling the grounds it was the safest spot we were going to find. The only real problem is the smell. It smells absolutely terrible. For some reason there’s a sewage pipe dumping into the bay right under the restaurant. So while you’re enjoying your fancy steak and discussing the future of the masses, poo’s are floating directly underneath your table. There is a sort of deflector that keeps the larger chunks to the side but it doesn’t do anything for the smell. 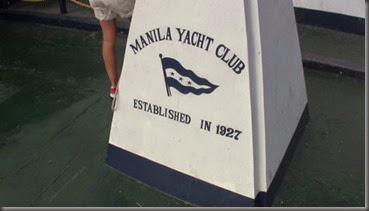 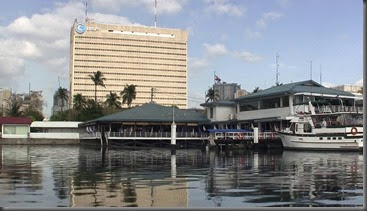 Manila is like that though. A city of polar opposites, of new and old. Of great poverty and world-class wealth. It’s actually 17 cities that have grown together to form a mega-city with just about anything your little heart could desire. Before WWII Manila was known as the “Pearl Of the Of Orient” . It was a Paris meets New Orleans but in Asia, at a strategic position between the East and West. Manila had charming architecture, a bustling economy, and was leading Asia as a bridge between the East and West. Music, art, and education flourished. Manila was the first Asian city to have ice cream parlors and movie theaters. And then WWII happened. 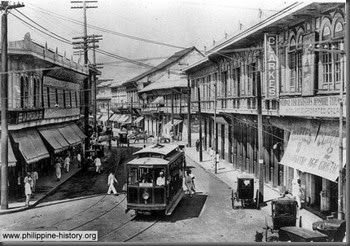 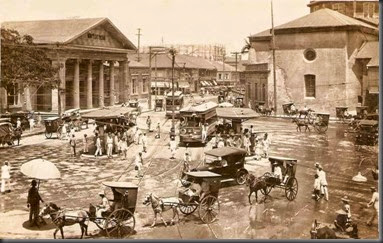 Manila was completely and utterly destroyed in WWII. After the American forces retreated in the face of the Japanese advance the city was occupied and a special type of horror befell this beautiful city. Over 100,000 citizens were murdered by the occupation, their bodies left to rot or pushed into the river. The Japanese systematically killed everyone with their swords to save ammunition. As if that wasn’t enough American forces then carpet bombed the entire city to oust of the Japanese. So, in effect the entire city was destroyed and the beautiful Manila of the past flattened and turned to rubble. 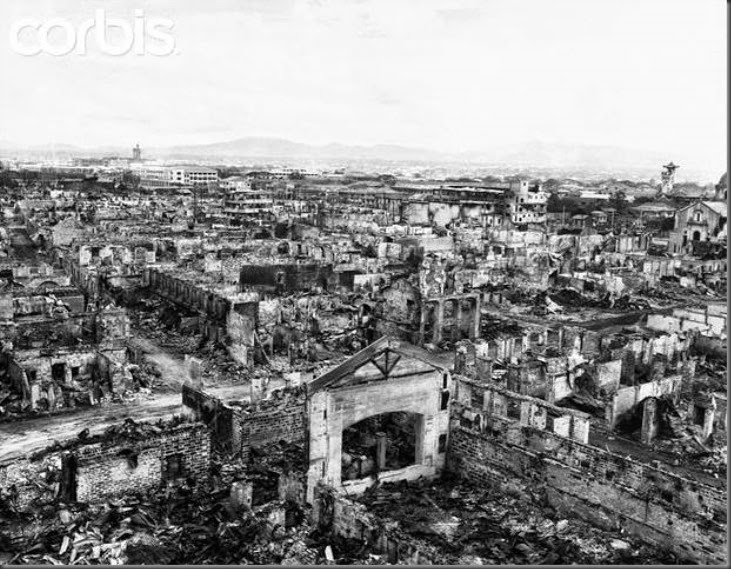 Very little exists from the pre-WWII era. Most say the city lost it’s soul, core, and never truly recovered it’s charm which is why many claim Manila to be a less than stellar tourist destination. This also means that the ENTIRE city with it’s impressive sky scrapers and bustling business districts has been built from scratch during the last 70 years. In fact most of it has been built within the last 20 years which is astounding. 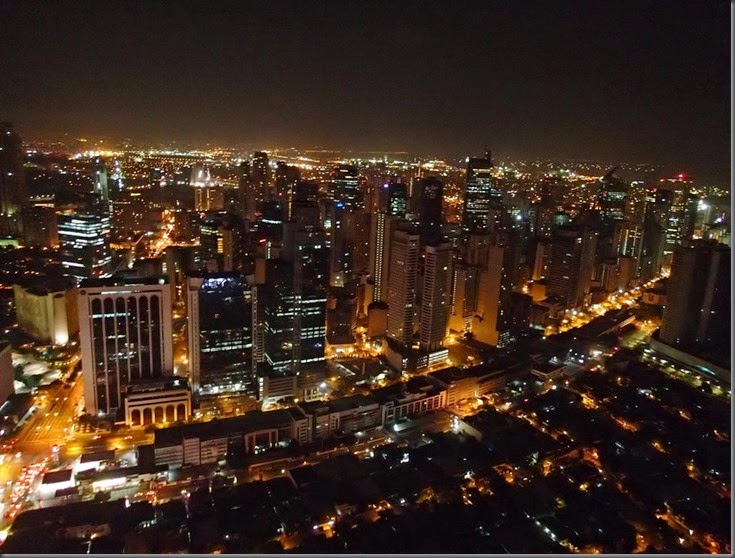 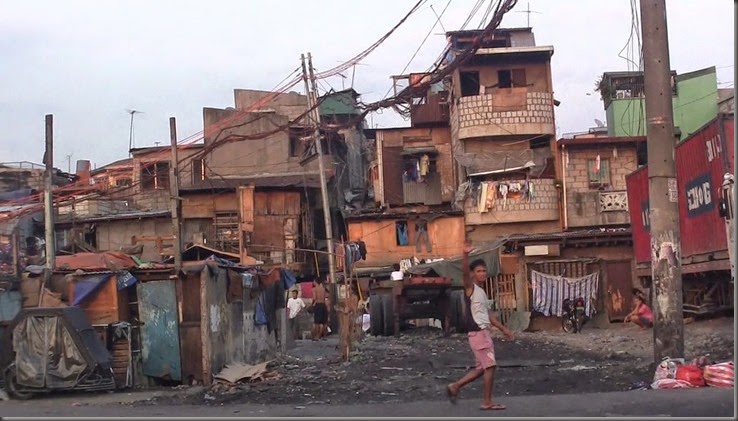 Squatter Houses – The Wrong Side Of The Tracks

So what did we think about Manila??? What did we do in Manila? Well you’ll just have to read part 2! ?