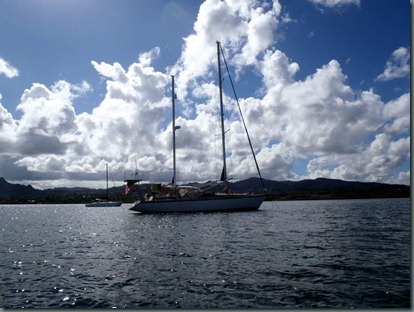 “Don’t land in Suva, it’s dirty, unsafe, and a hassle to get officials to check you in.  Plus it rains constantly and the anchorage smells like garbage.”  Is what a grizzled old cruiser told us in Auckland.  I always like to take comments like this with a grain of salt, knowing that one person’s bad experience is probably slightly skewed, although the cruising guide did mention the aroma of trash from the town dump.  We landed in Suva regardless and set our hook in a sunny, calm, protected bay of water just a stone’s throw from the Royal Suva Yacht Club (RSYC).  We anchored between a reef and a sunken fishing boat (somewhat disconcerting) in about 2 meters of murky water.  We wouldn’t be swimming anytime soon but the holding was good and after 8 days of sailing we welcomed the rest.

A call to the RSYC over the radio organized customs, immigration, and health inspections.  We were to hoist our yellow quarantine flag and stay onboard until they arrived at 3PM.  3PM rolled around, then 3:30, then around 4:00 a fishing skiff raced out of the yacht club and headed our way.  We’re now on Fiji time, slightly behind Island time,  so this was to be expected.

Three officials and one driver boarded Delos and sat around our salon table.  Strangely enough when I offered them a cool drink they all turned it down.  They only accepted on the second offer when I mentioned that we had non-alcoholic drinks.  So different from the Tongan officials that drank one of our Heineken mini-kegs while they checked us in.  I felt like I was in a mini-tribunal answering three sets of verbal questions while simultaneously filling out lengthy forms in duplicate.  I had been warned about the trials of Fijian Bureaucracy.

I knew things were winding down when the Customs official lowered his head and literally fell asleep with his chin on his chest, only aroused when one of his colleagues prodded him for an answer in Fijian.  It was Friday afternoon and they were in a hurry so we got the expedited inspection and were free to disembark after only 30 minutes!  Only one catch- the Immigration official had forgotten a few forms so I’d need to come by her office Monday morning to fill them out.  I’d also need to pay the fees to the Ministry of Health for the health inspection we had just.  This consisted of me signing a form and the official filling in the rest.  “Do you want me to fill out any of this information I asked?”  “No.  You all look healthy enough.” was his reply.  So we were free to head into the RSYC bar for a few beers and our first time on land in almost 9 days! 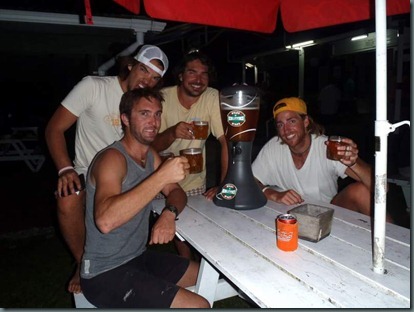 Our first beers at the RSYC

Bright and early on Monday morning I taxied into town with a full to-do list.  This included paying our fees, finishing immigration paperwork, altering the crew list, and getting a cruising permit to visit the outer Fijian Island groups.  Ready for an all day bureaucratic adventure I mentally prepared myself for a long and hot day.  The most elusive item on the list was a permit to the Lau group, the most remote and untouched group in Fiji.  From what we’ve heard it was either A) Completely impossible to obtain, B) Only obtained with a written invitation from a chief in Lau, C) Could be had for $1000 .  The last answer was directly from the Fijian Immigration Department.

By chance we met a captain of another boat that had sailed these waters for years. While having a few cold ones at the yacht club he said a Lau permit could be obtained if you found the right office in a back alley behind a Chinese shopping market and answered the right questions.  The right questions?  Was this the Search for the Holy Grail?  I showed the building name (no addresses) to a few locals and got back nothing but blank stares and shoulder shrugs.  Then on my way from one government office to the next  I asked an older Indian cab driver.  He said “Yes, of course.” and pointed to a dilapidated market we were just driving past.

I jumped out of the cab and pushed my way through throngs of local shoppers and merchants, all shoving their cheap Chinese clothing and housewares into my face.  Not knowing where to go I looked for stairs and made my way up out of the crowd.  The office was rumored to be on the third floor.  Looking more like an abandoned warehouse than an office building I made my way around and around searching for offices.  When I had almost given up hope I saw a closed door with a paper sign taped to it.  The sign said “Lau Provincial Office.”   I walked in and was immediately greeted by a large, friendly man in a Sulu, which is the traditional Fijian dress.

“How can I help you sir?”  he said.  “I’m sailing on a yacht and would like to visit the Lau Group” He smiled and motioned for me to sit in front of his desk.  “Now, why do  you want to visit the Lau group?”  he questioned.  “We like to travel to places that have been unspoiled by tourism.  We appreciate learning about traditional cultures and meeting people that live in traditional ways.  We like to stay away from large resorts and cities when we’re sailing.  We understand the Lau Group is the most remote in Fiji and the least visited by tourists and cruising boats.  We want to meet the people that live in the villages, and experience their lifestyle” was my answer.  “And how many people on your yacht sir?”  was his reply.  “There are only four of  us” I replied.

“Congratulations!  Your permit to Lau has been approved.  The cost will be a $50 permit fee plus $5 per person per day.  All the money goes into an account to support the islands” was his answer.  Bingo!  Apparently this was the answer he was looking for.  He then added “Of course, we understand that you are sailing and must go only when the wind and weather is good for you.  So how long do you INTEND to stay?”  With a little leeway in our schedule I opted to pay for 14 days and let the rest work itself out with the wind. 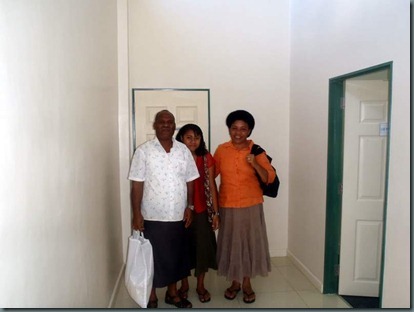 The Minister of Lau Affairs and his family

So we are setting sail for the Lau Group, the most remote and untouched group in Fiji.  You’re not allowed to visit Lau until you check into Fiji first to obtain your permit,  so for most boats it’s a 200 mile sail East back towards Tonga.  Because of this hardly any boats sail to Lau.  In fact when I asked how many permits he had issued this year he counted on his fingers.  We’re excited to visit these islands and don’t mind the extra miles! 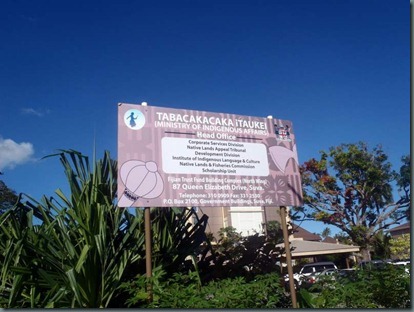 One of many government offices visited for permits

Yes, the check in process in Fiji was a little lengthy and bureaucratic when compared to the other countries we’ve been.  The fees were also the highest by far, about $285FJ (~$160 US) including the yacht club fee for four days.  We found Suva to be a convenient place to check in and the people were nothing but smiles in all the offices I visited.   The anchorage was incredibly calm while we were there with only a few afternoon rain showers.  Best of all we didn’t notice even the hint of garbage smell.  Maybe the town dump has moved over the years.  The city surprised us with it’s cleanliness, and the taxis and food are the cheapest we’ve seen since Mexico.  The RSYC was a great base to explore inland with plenty of taxi’s available. 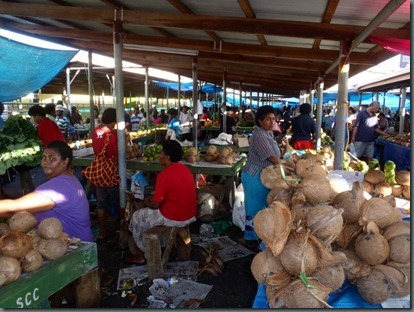 We plan to spend a week or so making our way to Lau stopping at Beqa, Ono, and Kandavu along the way.  Unfortunately this means no internet and text only blog posts for a while longer. 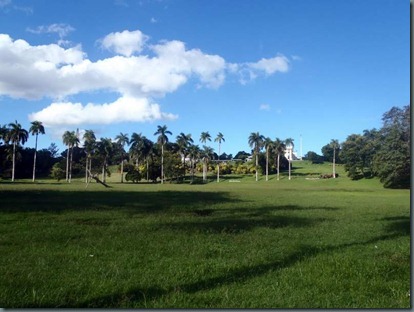