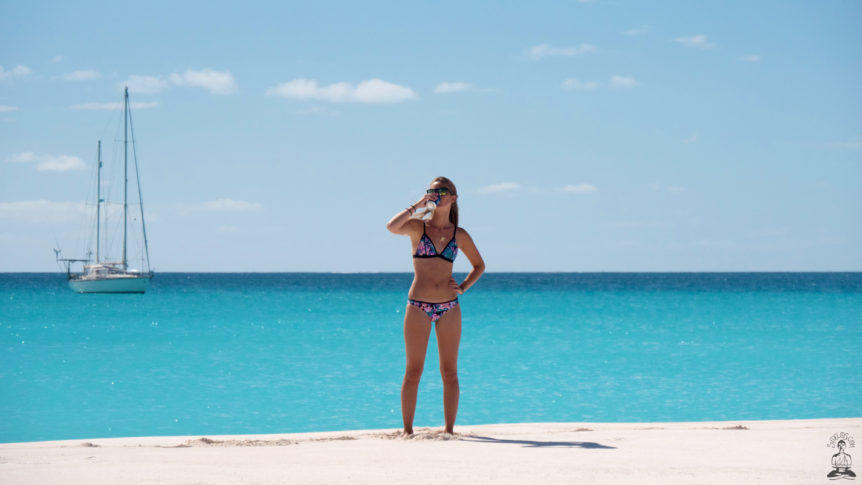 For as long as I can remember, traveling and cruising has been a constant background to everything that has happened in my life. I grew up in Sweden, hearing my parents dream of their next sailing adventure, and seeing the hard work they put in to make it come true. When I was just a little kid, my dad started building our first boat – Nausikaa – right in our backyard. In the summer of 2004, after over six years of saving and hard work, the boat was finally finished and we set sail for a year in the Mediterranean. Me and my brother Joakim were in elementary school at the time, so we spent our days travelling through the channels of Europe while learning all about the great and terrible things that had taken place in the countries we were traveling through. Such an amazing way to learn! 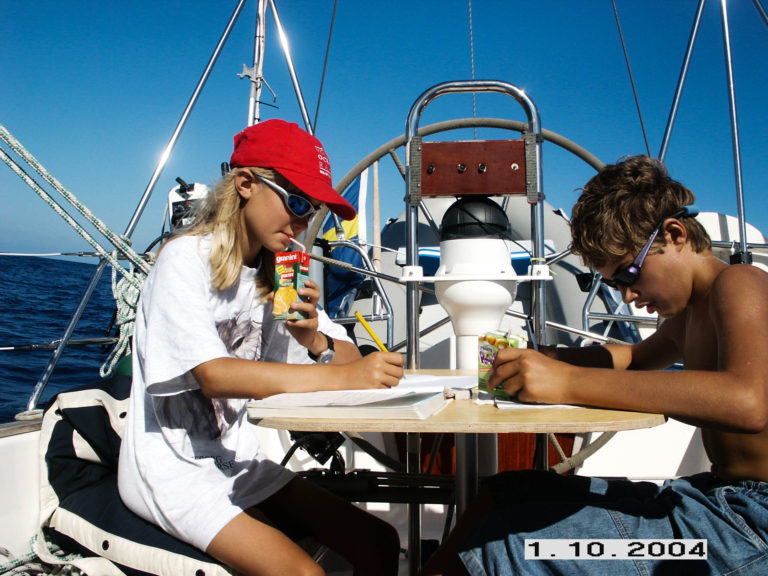 (My brother and I at School while sailing towards the Caribbean)

Once finally in the med, we realized this part of the world wasn´t actually ideal for cruising. Things were quite expensive and it was getting colder by the day, so we decided to make a turn for the Caribbean! Even though I was only ten at the time, I´ll never forget the feeling of accomplishment we all had as we approached Barbados after our first Atlantic crossing.  Having never been to any tropical place before, I was completely blown away by all the smells, the blue water, the palm trees and the white sandy beaches. It felt like arriving in paradise, a place I had only seen in movies and pictures! Everywhere you went on the island there were massive speakers blasting reggae Christmas carols, and in every direction there was something new and exciting to look at. This was a huge contrast to the wet cold winter that was happening in Sweden at that exact time.

We spent the season cruising around in the Caribbean and it wasn’t without much hesitation that we steered away from Trinidad, heading not for Panama and the circumnavigation like many others that we had met, but back to Sweden for school and jobs. I think we all would have loved to continue through the canal, but the cruising kitty was running low and it was time to head home. 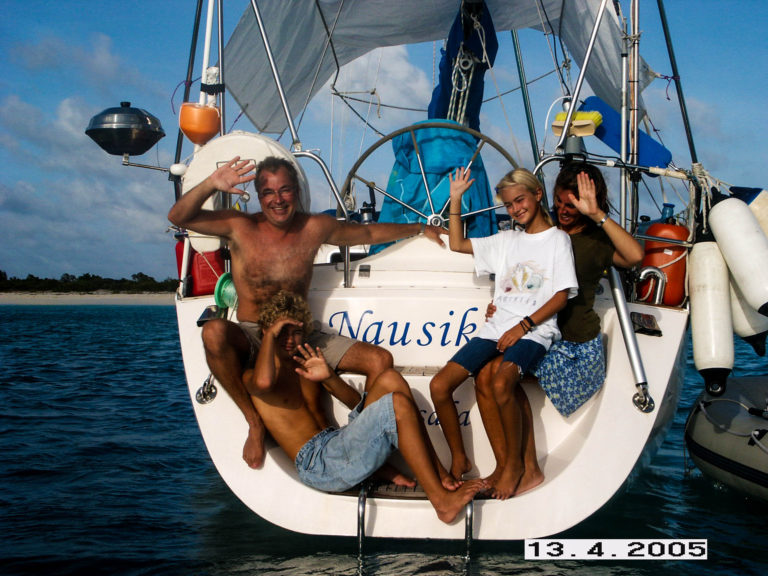 Coming back was a strange thing. We´d been gone for just a year and not much had changed back home, whereas I felt like a completely different person from who I was before we went cruising. So much had happened in that year. Me and my brother had both made lifelong friends with other cruiser kids, beginning by just using hand gestures and smiles and ending with us both speaking fluent English by the end of the year. We’d gotten to see how differently life could be lived – everything from people doing ceramics in muddy huts in Morocco to multimillionaires living onboard massive super yachts in Anguilla. Cruising and constantly coming to new places and meeting new people had taught me more than I will ever truly grasp, but it had also left me lacking in what was considered important back home – what to wear, who the cool new celebrities were and that it apparently was time to start wearing makeup. Me and my old friends were simply on completely different wavelengths, and it was quite a shock coming back from the open and worry free environment of being a cruiser kid, trying to adapt back into the confined social environment that is our average western society. Eventually I did adapt, for a while. However, I always kept with me the curiosity and wanderlust that I had acquired over that year, and in that sense more than any that first year out cruising has really shaped my life and given me the curiosity to always continue exploring.

Years passed by as my parents worked hard to get a new boat that we eventually bought and sailed back to Sweden from the Med. As mum and dad planned and prepared for the next sailing adventure the time had come for me to go to high school, and there was really ever only one option for me – the sailing college. It´s not as it may sound a college which is all about sailing, but rather about having the world as your classroom. To make this possible, the students sail for 2 months each year on a 50 meter (about 150 ft) long square rigged tall ship named Gunilla. You learn all about old school sailing, new cultures and how to work as a team with your 44 classmates and the crew onboard. Together we´d take her through Europe, down to North Africa, over the Atlantic to the Caribbean and back each year, although you´d do different parts of the trip over a total of three years and six months of sailing. 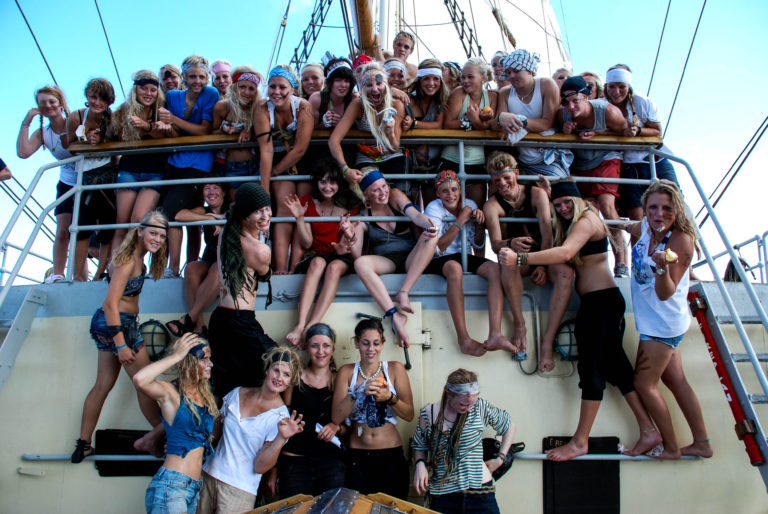 (My friends and classmates aboard Gunilla, sailing somewhere)

Looking back, I so appreciate the time I got to spend onboard Gunilla, how every year you´d get a break from the stress of school and modern society where you could just focus on the now and the tasks at hand. When you’re onboard a ship like that, working your ass off every single day doing four by four watches filled with maintenance and old school sailing with not an electrical winch in sight, doing schoolwork and quite a bit of mischief, eventually all the buzz of land life just starts to fade away. You focus on what the next meal is going to be, and whenever you can, you try to get at bit of sleep. You don´t have the time or energy to worry about what´s going on back home or what´s going to happen in the future. You become a part of something more important – keeping the boat afloat, on course and moving towards the goal of your journey.

Three years went by in what felt like a second. I finished high school, and for my parents the time had finally come for the beginning of their next journey – a circumnavigation. So I spent some time working and saving up money, and then flew out to Panama to join them for the pacific crossing and French Polynesia. It was so cool getting to spend some time cruising with my parents again, after spending the past 3 years sailing on such an old school boat. I was in heaven as we sailed the beautiful and remote little islands in the Pacific. After a few months of cruising my money had run out and it was time for me to head back home where I eventually started medical school, which has really been an adventure in itself. By this time in my life I was very ready to be stationary for a while, and I spent one and a half year living the most normal life, going to school, hanging out with friends and getting into the routine of everyday life. 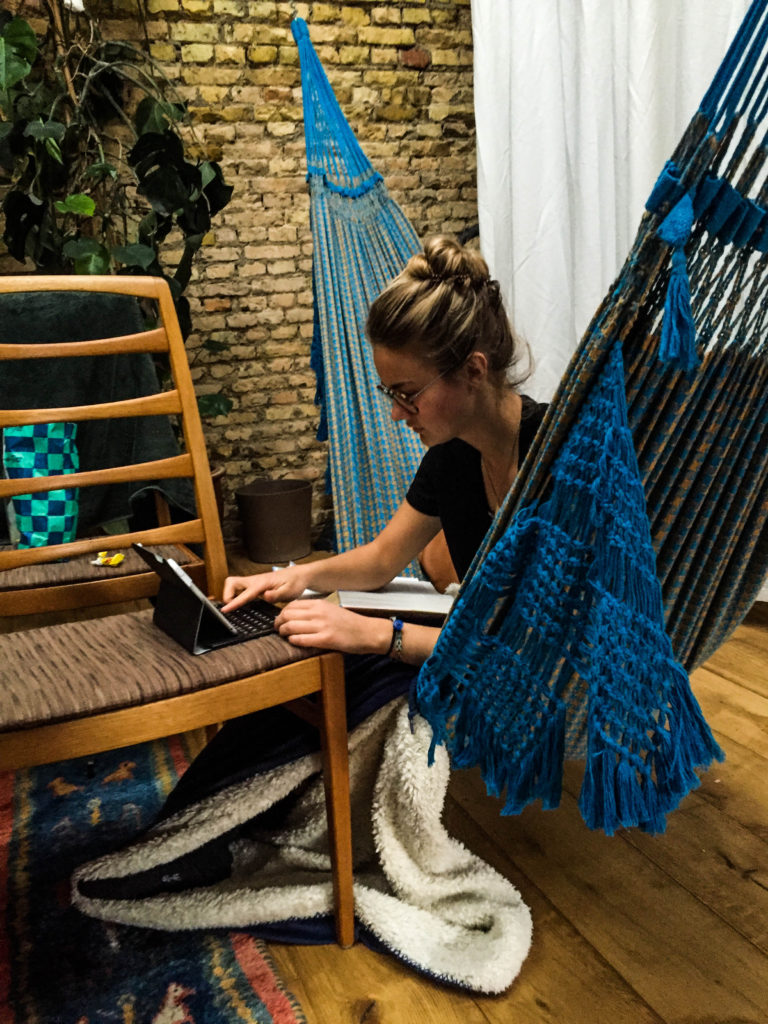 (Me trying to be a good student)

Meanwhile, my parents had sailed their way to South Africa and I decided it was time to fly out and see them again. Mahi Mahi, which is the name of their boat, was tied up in the V&A Marina in Cape Town where they were going to stay put for a while to celebrate Christmas. It was so amazing to see them again and be able to share everything that had happened since last time we spoke without the constant bad connection of skype and Facebook calls.

And then one day when I woke up, there was a new boat in the spot right next to us. I remember walking down from the showers later that morning and being called over by mum who was sitting in Delos´s cockpit chatting in Swedish with Märta and Karin. Brian and Brady were downstairs still sound asleep from last night´s adventures, celebrating their arrival around the Cape of Good Hope. As things usually go when cruisers meet up, they all came over later that night for some sundowners on Mahi, and that´s when I first met Brady.  We all had a great time, and ended the night with some good old Star Wars watching onboard Delos. A few days later, me and Brady decided to go out for a night to see the local comedy club. Granted, we didn´t actually end up seeing very much of that, so I can´t tell you a lot about the show itself. What I can tell you though is that we had an amazing time, and that after that night I ended up spending most of my remaining time in Cape Town onboard Delos.

The following weeks it felt like someone had just turned the color back on in my life after having spent the past year focusing on school and upcoming exams. Getting to have my parents and my brother all close by, spending time with Brady and discovering the beautiful city of Cape Town was exactly what I needed at the time. 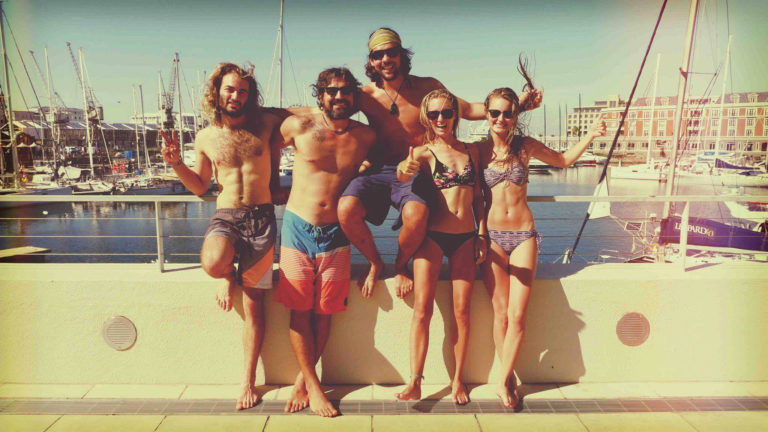 (My brother and I with Brady, Brian and Karin in the V&A Marina, Cape Town)

That month in Cape Town flew by in an instant. Even when Brady and I first started hanging out, we already knew I would be leaving within the month. But the closer to that day we actually came, the more absurd it seemed to me that I would never get to see neither Brady nor the rest of the amazing Delos crew again. Sitting at the airport in Cape Town, I realized just how happy I´d been over the past month, and how little sense it would make to let this be the end of it. So after flying back home and having Brady come out to visit me in Sweden, I got straight into sorting things out to be able to fly out and sail with Delos this summer. 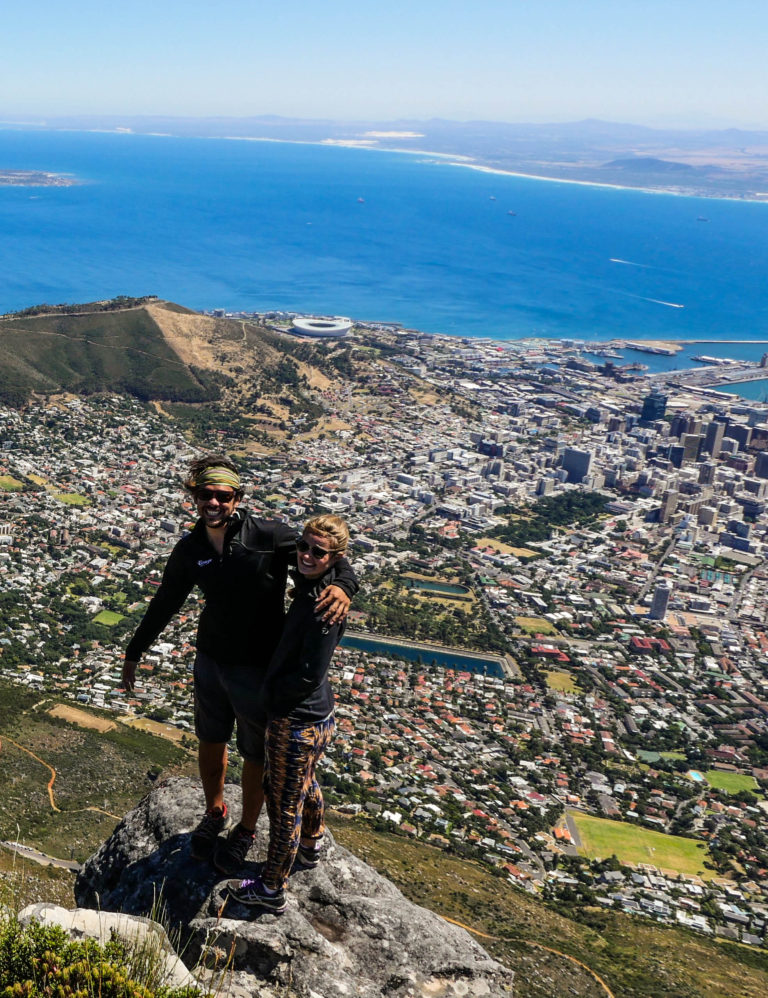 (Brady and I hiking around Cape Town)

And now here I am back on Delos typing this blog somewhere in the Indian Ocean.  I have been aboard for about two months now, and it still feels a bit unreal. I am so grateful that my parents were crazy enough to take their kids sailing at such a young age.  Looking back, it really ingrained something into my soul that keeps feeding my urge to go sailing and traveling. I have had so many great experiences and memories from the past few months on Delos but the time is flying by and I have been offered an amazing opportunity to come work on board the tall ship Gunilla. I will be heading back to that floating college that I called home a few years ago but this time instead of being a student I will be one of the teachers and crew.  I’ll be part of the crew sailing her from Sweden to Portugal over the next few months, and after that I´ll see where life will take me ?

Cheers Delos tribe, and so nice to meet you! 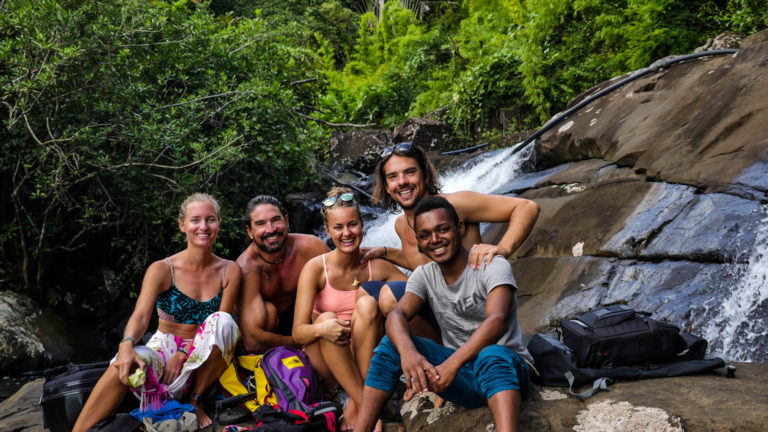 (Chilling at a waterfall in Madagascar!)