You hear all the time that any goal worth pursuing is fraught with challenges and setbacks. It’s your character that determines whether or not you’ll achieve what you set out to do, not the circumstances you find yourself in. Well, out here where we are, in an area of the ocean called the Inter-Tropical Convergence Zone (ITCZ), character is only part of it. Boat size and fuel capacity play a pretty major role.

The ITCZ used to be known by sailors as the doldrums or horse latitudes. The fancy nine-syllable appellation doesn’t change what it is and always has been: an area of no wind and hot temperatures that hovers on or near the equator for hundreds of miles, and that can drive even the most rational sailor so mad that he’ll push a horse overboard in a ditch effort to lighten the ship and sail the heck out of here. Fortunately we live in the days of computers and instant noodles, so we have a little gem called a diesel engine. The 78 horses that we carry on this boat will never have to swim.

The ITCZ is a meeting of two giants, really: the northeast trade wind belt and the southeast trade wind belt. When these formidable beasts step into the ring together, they bring wild, thunderous rainstorms (or squalls), unpredictable weather patterns, and patches of ocean where the wind just refuses to blow. It’s guaranteed that this battle will be happening, but where it’ll take place is often a mystery. Sometimes they duke it out at 10N, while at other times they hover right over the equator at 01N. Rarely does the ITCZ move south of the equator — the northeast winds are more territorial than the southeast winds, and don’t like to venture into the southern hemisphere.

At some point, everyone who makes this passage will encounter the ITCZ. But from year to year, some sailors get lucky and find areas of the ITCZ that are breezy. When that happens, the news starts to fly around the fleet: “Mary Powell found wind at 130W”; “Silver Lining turned early at 110W and has had breeze all the way to the equator.” But, the ITCZ is fickle and can move up to 120 miles in a day. Where one boat finds wind, another boat will find a calm patch just a day or two later.

Our friend Kevin left La Cruz on March 16 on the sailboat Pahto, a 28-foot Cape Dory. He’d heard that Mary Powell found wind at 130W, and decided to try his luck and cross the ITCZ there. But when Kevin made his turn, the ITCZ held him in its windless clutches for hundreds of miles. After a few days of conservatively using his last 20 gallons of fuel (he carries only 30 gallons on his boat), he finally ran out and simply had to drift with the current. Mostly he drifted north and west, and ended up more than 200 miles from where he started. Finally, after more than a week with no wind, Neptune smiled on Kevin and delivered him some breeze. He’s now just a few days out from Hiva Oa.

Another friend of ours, Eric, on the sailboat Secret Agent Man, a 33-foot Cal, was near Kevin when he crossed the ITCZ. After a few days of watching his fuel gauge drop, he decided to try his hand at rowing his boat south. It was a futile effort, but one that speaks volumes about the lengths people will go to in order to get out of the doldrums. 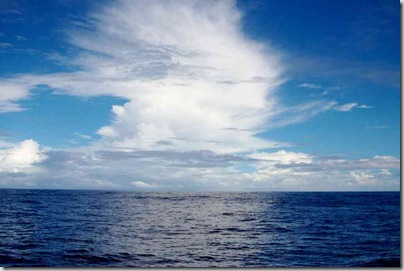 We decided to make our turn at 126W, so two nights ago we pushed a few buttons on the autopilot and started sailing south. After about 12 hours, the wind shut off. Since then, we’ve seen an average of two knots of wind. Fortunately, we carry 160 gallons of fuel with us. Not a ton, but enough to get us out of here. We’re motoring at six knots currently, and figure we have at least 150 miles to go before we find some breeze to carry us to Hiva Oa.

Since entering the ITCZ, we’ve encountered a few squalls, but just one that is noteworthy. The night that we turned south, I was on watch at midnight — sitting in the cockpit, gazing up at the blanket of stars, and enjoying the slow but steady sail toward the equator (at that point, we had about 9-10 knots of wind and were flying our mizzen spinnaker). Suddenly a cloak of blackness surrounded the boat. I looked out toward the horizon and there was nothing: no light, no stars. It was as if we’d sailed off the earth and were hovering in space. For a few minutes it was eerily quiet, and then, from out of the darkness, the wind began to howl, shifting up to 90 degrees in seconds and ranging in speed from 15 to 25 knots. Our mizzen spinnaker began to twist and stretch in all directions, and threatened to tear itself to shreds. I went out into the driving rain and fought with it for ten minutes before it finally relented and fell onto the deck. Both spinnaker and I were drenched as I turned on the engine to keep us moving along our course. When I sat down to catch my breath, the intensity of the rain increased, and for a few minutes was pounding onto the deck so hard I felt as if I were in the midst of a shooting range, dodging bullets that were whizzing past my head. This all lasted about 20 minutes, and then it was gone. Instantly after it passed, the sky cleared and the stars came back out.

Because the ITCZ shifts, we’re hoping that it won’t move south and follow us down to the equator. So far, it’s looking like we’re almost near the edge of it and should find the southeast trade winds soon. After we find the wind, we’ll be lifted along to Hiva Oa at a quick pace. We could make landfall in eight days!