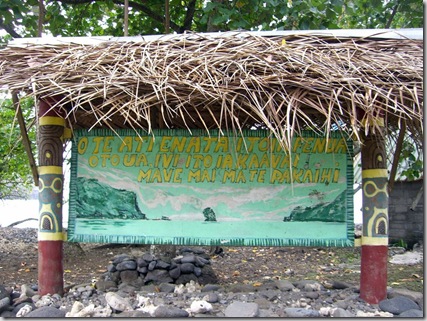 After two days enjoying the cool, refreshing swimming hole at Hanamenu we decided to pick up the hook and continue east on our circumnavigation of Hiva Oa.  During our sail from Atuona we knocked our deck light from it’s mast fitting and it was now precariously hanging from the wires, banging against the mast as Delos rocked in the swells.  I put on my climbing harness and sat in our bosuns chair while Erin used our starboard primary winch to pull me up.  I was nearly finished with the repair when I saw a long figure paddling out from the beach.  As he drew closer I recognized Joaquim, our previous nights dinner host, balancing a huge stalk of bananas on his kayak.  We think he wanted to reciprocate for the small gift of batteries and surgical tubing we left on his doorstep.  We’ve read the Polynesian culture feel they must give the last gift as part of their hospitality.  We gratefully accepted, picked up our hook, and raised the sails.

The sailing so far has been tremendous with constant NE to SE winds ranging from 15-20 knots.  Since arriving in the Marquesas we’ve only needed our diesel to set and drop the hook, just one of the benefits of sailing to islands located in the trade wind belt.  The sailing is so different than the shifty and finicky winds we experience back home in the Puget Sound. 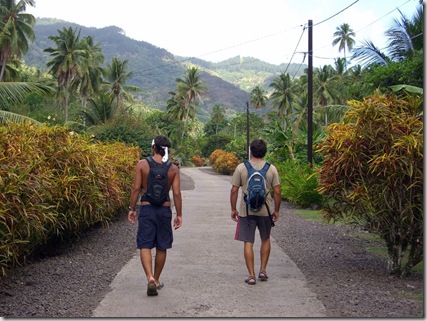 After a few short hours of sailing we arrived in Hanaiapa and dropped our hook in 40 feet.  Being early afternoon we launched the dinghy and headed to a concrete pier to explore the town, stern anchoring the dinghy just off the concrete wall.  After a brief walk we found ourselves in a quaint village with one street.  The houses were neat and tidy with well manicured yards.  The abundance of fruit was amazing. 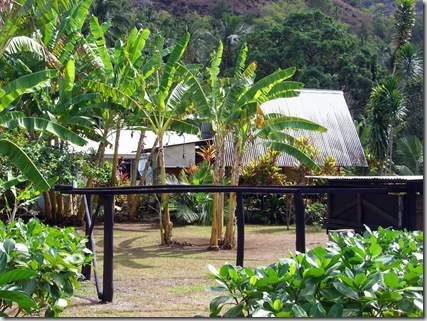 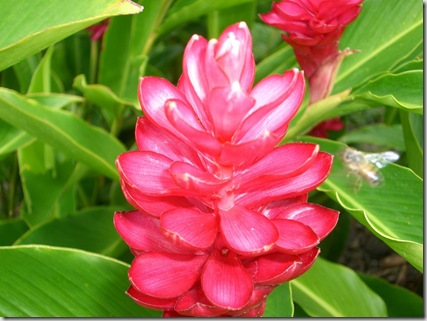 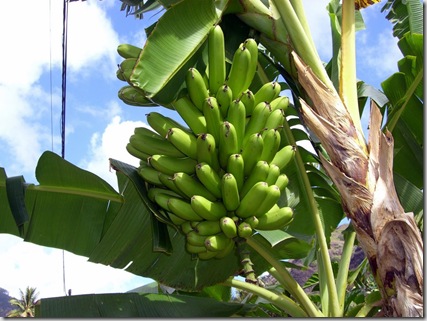 Each yard and both sides of the paved road were filled with noni, pamplemousse (sweet grapefruit), breadfruit, mango, limes, papaya, bananas, and apples.  Everywhere we looked there was a tree bearing some tasty edible treat.  We watched our step to avoid stepping on over ripe fruit that had already fallen. 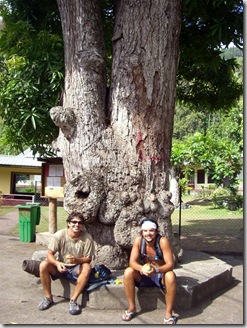 Venturing down the road we found a stone wall encircling the base of a huge tree right in the middle of the road.  The trunk was at least 5 feet thick and the branches reaching into the sky created a wonderfully shaded rest area to get out of the sun for a few minutes.  We decided to take advantage of the shade for a short rest and sat down opposite of two men with the same idea.  Our typical “Bon jour” didn’t get us much more than a nod and a forced half smile.  After about 10 minutes of relaxing one of the men approached us with an outstretched hand and a huge pamplemousse carried in the crook of his arm.  With a smile he offered us the fruit, pointed to his mouth, and repeated “manger, manger”.  We took the hint, cut up the delicious fruit, and devoured it. 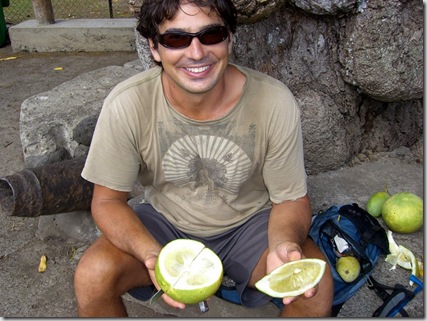 The pamplemousse here is so different than the grapefruit we’re used to.  It’s the same size (maybe even bigger) but is sweet reminding us of a cross between a grapefruit and orange.  With juice running down our hands and chins we expressed our thanks.  No sooner had we cleaned ourselves up our new friend reappeared carrying a 25 foot wooden pole with a string basket attached to the end.  Without a word he pushed the basket into the deep reaches of the tree and and returned with the most beautiful, perfectly ripe mangos.  Time and time again he repeated this, each time handing us a delicious mango until our arms were full.

While enjoying our feast we did the best we could to carry on a conversation using a mixture of French and hand gestures.  We told him our story about traveling on a boat and visiting the Marquesas.  He told us he was waiting under the tree to pick up his 5 year old daughter from school (directly behind the mango) and that he lived across the street.  He asked us how long we planned to stay and said that in the morning at 10:00AM he would bring us more fruit.  We were to listen for three whistles then meet him at the concrete pier in our dinghy.  10:00AM came and went with no sign of our new friend.  We had a gift of crayons, books, and hair ties for his daughter so we went into town to deliver the gift.  He sheepishly smiled and said he had slept late and got occupied with a soccer match on TV.  He said at 4:00PM to listen for the whistles once again.  4:00 came and went with no sign.  We had all but given up when during breakfast the next morning we saw a small yard tractor creeping up the path to the pier, followed by three whistles.  He smiled once again, shrugged his shoulders, and admitted that he had fallen asleep once again giving us a great example Marquesan island time.

Our first day exploring Haniapa we returned to the dinghy and weren’t able to retrieve our stern anchor, no matter how hard we pulled or maneuvered the dinghy.  Brady free dove down 30 feet and found that our anchor rode disappeared into a hole under a huge rock.  Without a mask and fins it was too difficult to retrieve the anchor so we dropped the rode and returned to Delos for our dive gear.  We decided to combine the anchor retrieval with a bit of lobster hunting so we grabbed our scuba gear for our first dive in South Pacific waters. 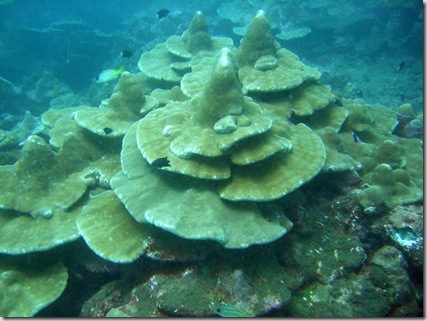 Visibility was awesome, the water was 85 degrees, and it wasn’t long before we had retrieved the anchor.  Not only had the rode wrapped around a coral head but a boulder also tumbled onto it.  Without dive gear we would’ve lost our trusty little Danforth.  After resetting the anchor in sand we swam a little further from the pier in search of lobster.  We quickly reached the bottom in 35 feet and found ourselves surrounded by the most tremendous mushroom coral formations.  The mushroom coral grew straight up for as much as 20 feet before ending in a broad cap, at times 8-9 feet across. 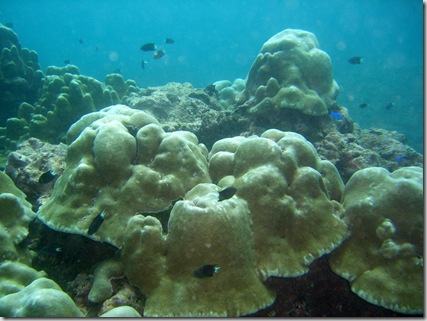 It felt like swimming through a magical mushroom forest, something out of Alice and Wonderland  According to Brady this is a very rare type of coral that’s now extinct in the Florida Key’s.  For over 30 years people have been trying to grow it without success.  It’s very slow growing, rising only a foot every 100 years.  It was mind blowing to realize that while retrieving our dinghy anchor we stumbled across rare mushroom coral that had been growing for almost 2,000 years.  We doubt that many cruisers have discovered this gem laying just off this non-descript concrete pier. 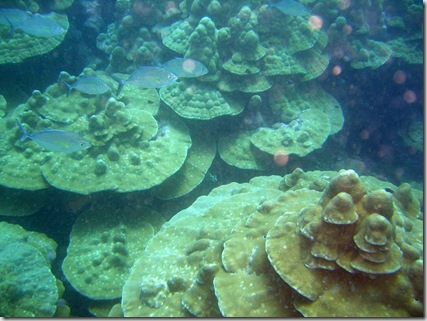