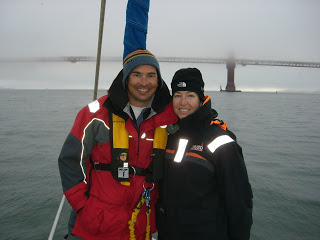 Share
We crossed under the Golden Gate bridge just after 6AM on Thursday, August 27th. The trip from Seattle took just over 5 days non-stop. Since then we’ve explored the city, gotten busted by a trasit cop for jumping tolls, and saw the Giants get killed at ATT Park right down the street from our marina.
On Friday night after moving the boat to Sausalito a few of Harolds friends joined the Delos crew for a sail out on San Francisco Bay. I have to say that was probably one of the best sails we’ve ever had on the boat. The breeze was 20-25 knots as we left the channel and headed towards downtown San Fransicso. We topped 8 knots close hauled heading upwind leaving the Alcatraz Island buoy to port. After dodging a few tourist and container ships we were running down wind along the San Francisco waterfront with an amazing view of the city and Pier 39 complete with the famous Sea Lion colony. We continued South to the Bay Bridge before turning around and heading back upwind leaving Alcatraz to port once again. Delos really likes breezy conditions and felt so stable heeled over at 20 degrees with the sound of the wind in the rigging propelling us along. The boat just trucks along and Joe was even able to keep the blender pumping out Strawberry Daquiries ?
It was getting dark so we decided to call it a night. I approached the dock as usual and threw her into reverse to slow us down just like every time we’ve docked the boat. Only this time nothing happened! We were all confused as Delos continued on at about 1 knot right past the dock headed towards a VERY expensive powerboat in front of us. Our neighbor Michael once said to me “Only approach the dock at the speed that you intend to hit it.” This experience gave those words new meaning! I tried forward for another go around but no luck with this either. There was nothing happening at all and we were dead in the water without power. Luckily we’re on the end of a pier so I was able to pivot the boat 180 degrees with the bow thruster and use our momentum to make a smooth landing. Everyone was awsome quickly moving dock lines and fenders from starboard to port to avoid a potentially rough landing.
Some troubleshooting showed that the transmisison was functioning properly and the shaft turning in both forward and reverse- only nothing was happening. Yesterday I put on my short wet suit, fins, and mask for a peek underneath. The water is very, very murky. I couldn’t see more than 2 feet ahead and had to swim 7 feet down and to the middle of the boat for a closer look at the propeller shaft. My stomach sank like a rock when I grabbed the shaft and felt the threaded end where the nut that holds the propellor on is supposed to be. I came to the surface and broke the bad news to everyone. Delos was stranded and not going anywhere for a while…..
Somewhere in Richardson Bay off Sausalito our Autoprop H6 is lying in the muck of the bottom doing us no good at all. We do have a spare prop but can’t install it without the prop shaft key that is no doubt with the other prop in the mud. It’s hard to imagine how this could have happened after putting so many miles on the boat over the last 6 months. We do feel very fortunate that it happened here where we were able to quickly tie up to a dock rather than be stranded in the middle of the Pacific, or even worse in a tricky passage surrounded by hull crushing rocks.
I’m pretty sure it came off when I threw the transmission into reverse as we were able to motor right up to the dock. Hopefully it’s no more than 100 feet from where we’re sitting now. I called a few divers today but since it’s Sunday got no calls back. With any luck we’ll be able to retrieve it but I’m not holding my breathe and preparing for the worst case of buying a new prop. OUCH! That will certainly put a dent in the savings.
For now we’re “stuck” in Sausalito at a really nice marina and have to delay our trip up the river to Napa. Did you know you can take a boat to Napa? We didn’t either! I could think of worse places to be!
< Previous Travel BlogNext Travel Blog >