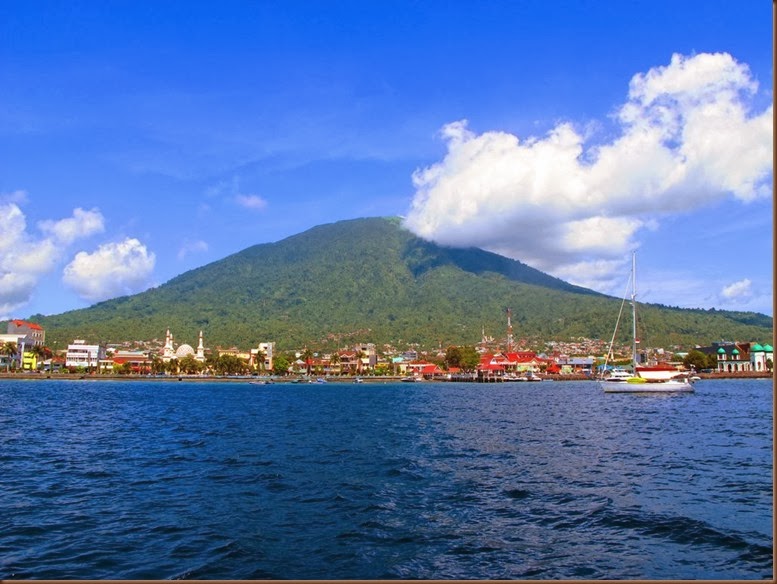 I looked out the window and enjoyed the scenery as we drove back to the jetty. The last ride we would take in Kris’ air conditioned car. I thought of all the things we had done in Ternate and how much we had loved it. It was definitely a highlight of the trip and regardless of the sweat drenching, sometimes unbearable heat, we were actually quite sad to leave.

“Kris, Kris, Kris” we yelled, our fists pumping in the air, seeing the tears roll down his face as we took Maggie back to Delos for the last time in Indonesia. There’s one thing about travelling that gets me feeling like this every time. The experiences we have and the people we met are invaluable cultural experiences I love so much, the only really hard thing is having to say goodbye a lot. 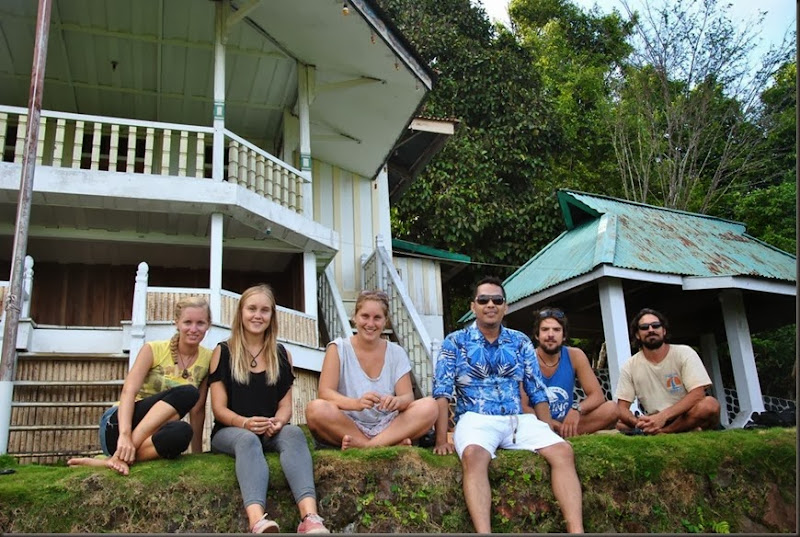 Nevertheless we had done it again, what a blast, we couldn’t really believe it! Our time in Indonesia was up, we had already extended our Visa’s another week or so, but such is life, we must go on. These moments are a real mix of emotions for us, sad but also anxiously exciting because the Philippines lay only 400 miles north.

We picked up the hook after about 2 hours of trying. Don’t laugh, we were actually in quite a pickle. We had set an extra anchor off the bow during our 2 week stay, for some extra holding. But somehow, with the currents swinging Delos back and forth twice a day, the chains had gotten themselves a bit tangled. Oh well, it was an excuse for a quick last dive, so Brian and I jumped in the water with our tanks and swam down to the bottom. It was like a little treasure hunt, I was surprised to see a bit of coral and fish life so close to a city like this. And then I looked up and from 35 meters down, I saw Delos’ hull bobbing up and down like a gigantic whale belly waiting to be scratched.

We untangled the chain that was wrapped around a bommie and set our heading north north-west. The sun shone through the clouds and onto the city of Ternate, lying busily at the foot of the massive volcano that rose behind and into the clouds above. The sounds of the singing mosques floated through the air for a few hours before they were drowned out by a massive rain squall. 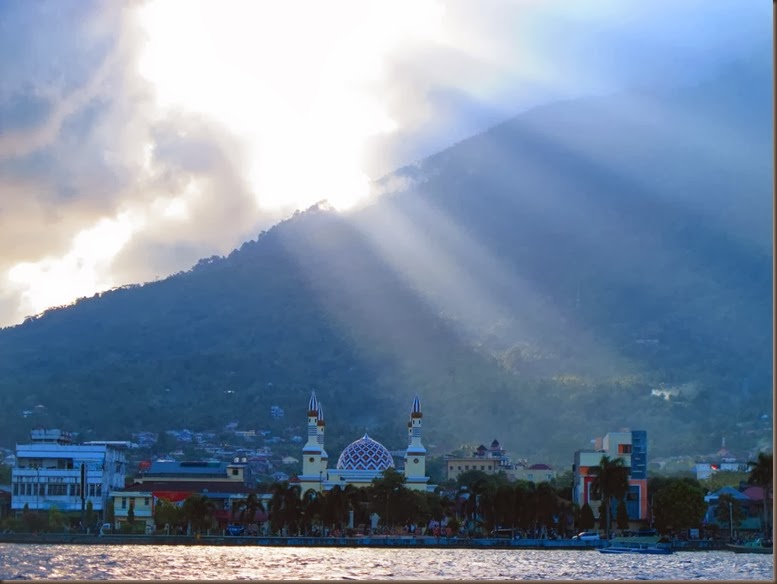 We bobbed along slowly at 2 knots up the West Coast of North Maluku until we finally picked up some wind during the middle of the night to sail more westerly. We woke the next morning to light breeze again and had noticed at least 2 or 3 fishing boats within sight for most of the morning. I grabbed my Ipod , sunhat and an apple and spent a few hours sitting up at the bow in my own thoughts and keeping watch. The afternoon sun was hot and I watched the clouds roll from one end of the sky to the other.
Like most days at sea, they are long and slow, but somehow,  before you know it, its dinner time and the sun is setting in that perfect kind of way. A nice feed cooked by Brady was enjoyed by all and Phoebe and I volunteered for first watch. We sat on the aft deck and talked our whole watch, of course keeping a close eye on the horizon and radar. The stars were out and it was perfect.
By the time I woke the next morning, we had reached Mahengetang, a small island half way between Indonesia and the Philippines. We had heard of this place for only one reason, an active underwater volcano. Excited and eager, we all jumped in the water ,only to be met with some crazy currents that swept a jellyfish over Phoebe. A scream and a quick clamber back on board, Brian forced her down while Brady peed on her. Just kidding, we used vinegar. A quick assessment to confirm she was okay, then we loaded the dinghy with our snorkel gear and set off for the GPS point given to us by some other cruisers we had met in Ternate. Having heard only good things, we were expecting to see a giant cone shaped volcano, huge bubbles fighting their way to the surface and some intense heat when you swam over it. Instead, we couldn’t even find it and after about 20 minutes of towing Brady behind on the diving/planing board, he thought he saw something. About 10 meters down, a bed of ash and volcanic rock lay still, tiny tiny bubbles slowly making their way to the surface at intervals of about 10 per minute. Not exactly what we had in mind but if you free dived down, and put your hand over the vent you could feel a little warmth trickling out. 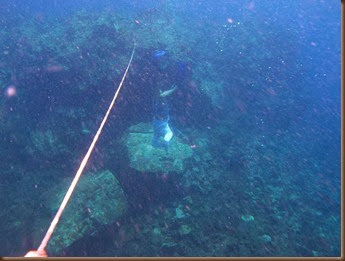 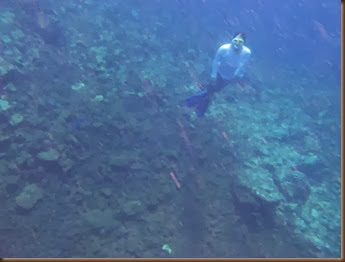 Either we didn’t get the right spot or our expectations were too high, either way it was a fun little adventure and we spent the rest of the afternoon taking turns getting towed behind Maggie on the planning board. By the time it was my time, a small dive boat had come by and anchored over the volcano. A couple of chubby looking tourists in snorkel gear jumped in and held onto the tyre hanging off the side of the boat for dear life. It seemed we had got the right spot after all.  I was wearing my bikini but the combination of the speed of Maggie, my bottoms being a little too loose, and my hands gripping the board, my bottoms ended up around my ankles. Brady purposefully swung Maggie in their direction. Maybe they got a little more than they bargained for.

Laughing and a little sunburnt, we picked up the hook and carried on with our journey North. Sometime in the afternoon, a big old white bird perched on the solar panels. Intrigued, we kept quiet and creeped on deck slowly as not to scare him. But after a few hours, he was still there and was even walking around the deck. Sweet, looks like we had a new crew member. 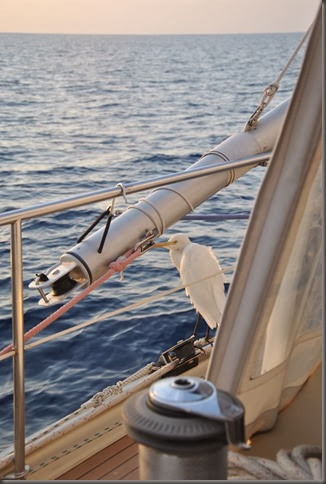 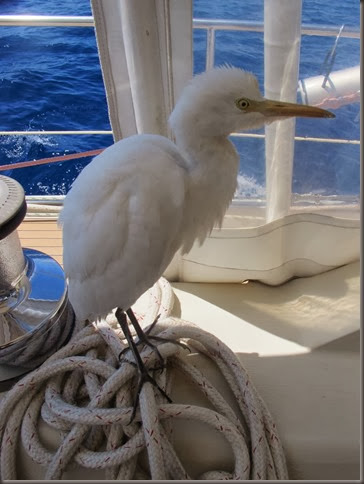 The sun descended and the moon rose, almost in equilibrium. The colours were so beautiful; bright, intense vivid colours surrounded the sun to the west and the most beautiful range of pastels with the moon to the East. 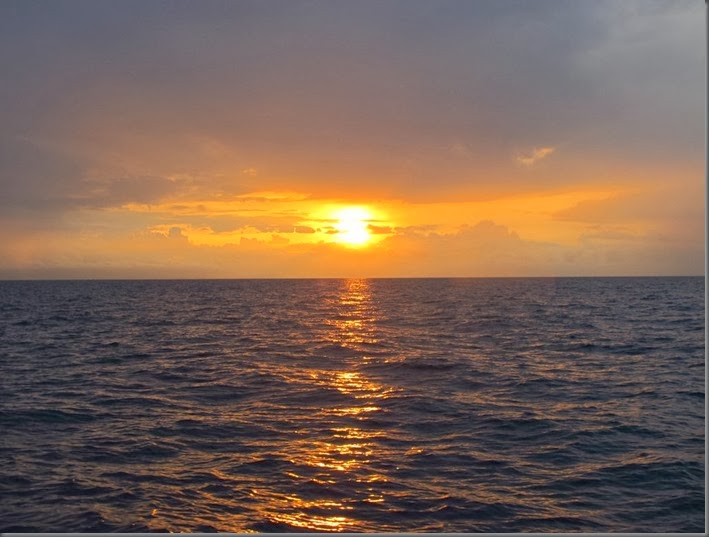 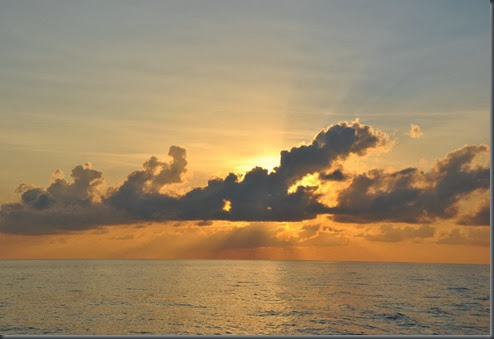 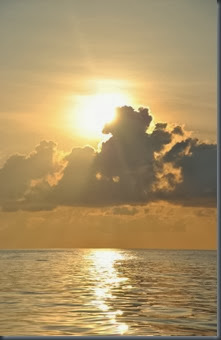 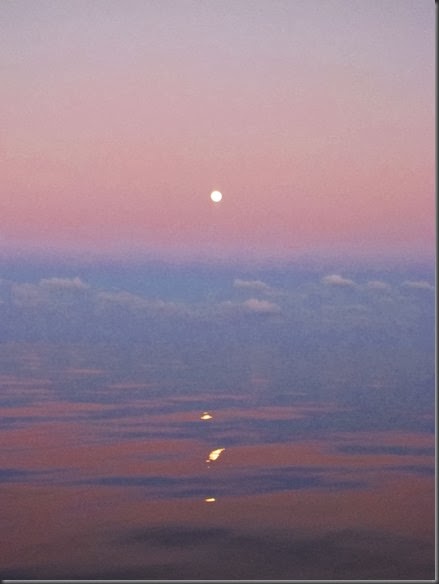 Despite the beautiful scenery, unfortunately the wind decided to disappear altogether and we were stuck with more current against us than breeze. At this speed, we were never going to reach Davao. So we had to turn the engine on, despite the leak in the cooling system and hope we would get some wind the next day.

No wind all night and no wind at sunrise. Luckily, the old white bird, which we had named Mr. Humphry, was still on the solar panels, seeming like he had a good nights rest. 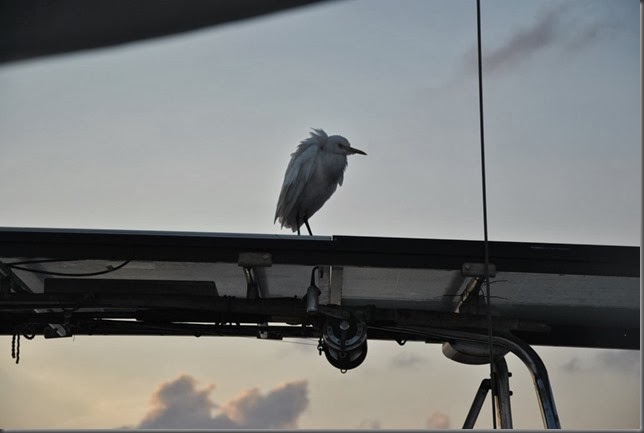 We were sitting in the Strait of Patience, somehow the heat had gotten far too unbearable and we resorted to watching the movie ‘Wind’ outside. A little ironic but a brilliant cheesy movie that definitely lifted our spirits, only to be damped again when it finished and we realised we had actually drifted south a little. Not exactly the direction we were headed for. After periodically checking the leak at different rpms Brian realized the leak pretty much stopped the higher it went, strange! Where was our wind though!?

We got out of the Strait and into the open ocean again. With this, Mr Humphry flew away, it seemed he was only hitching a ride. With the engine running, at this rate, Davao seemed to be only a day away. I honestly lost memory of what happened most of that morning and afternoon; it was about that time when all the days start to merge together. But I do remember spotting a group of whales that swam off our stern and into the distance on starboard. “Lets turn around and swim with them!” Brady said. So we turned Delos around and headed in the direction for where we saw them last. By the time we got there, they had already dove deep but Brady still decided to jump in with his fins and mask. Phoebe, Brian and I followed and jumped in with a scream of excitement.

Delos wasn’t going anywhere; perfect blue skies and not a touch of wind. How refreshing!! I felt exhilarated knowing there was over 3500 meters below me. Just as I realised this, there in the distance we spotted the whales heading straight for us. Phoebe and I jumped on top of each other, eyes wide with astonishment. I wasn’t quite sure what type of whales they were but they were big. Brady grabbed the GoPro and slowly started swimming towards them. Sounds of ‘pssshhhh’ creeped closer, followed by a spray of water from their blow holes. How cool was this! They came within 10 meters of Brady, just curious, big and slow. What a wicked experience

I woke up at 5am for my watch, having just reached the entrance of the Davao gulf.  Fishing boats and small moorings were everywhere so I had to keep a close eye through the sunrise. 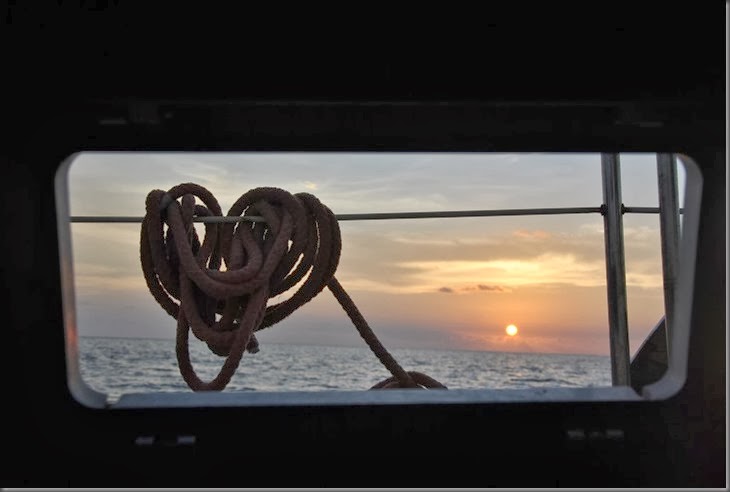 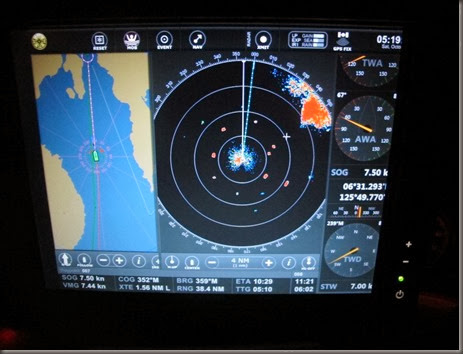 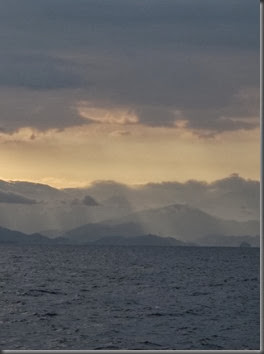 I made some tea and woke Brady up by 8. I slept for another couple of hours and by the time I woke again we had reached the north east side of Samal Island. The Oceanview marina was so close, we had made it!! Karin sliced up some watermelon for everyone and we sat there smiling in disbelief. Its always a strange feeling when you arrive in another country, let alone the Philippines. We knew nothing and had no expectations. We were really excited! Radioing ahead, we organised a slip and drove Delos into the marina. which had about 15 other boats. Delos hadn’t been tied up for nearly 3 months, it was a real treat for us. Oceanview was written along the top of the hill in big white block lettering. A few boats were on the hard, there was a big working shed and a two storey complex with amenities. After we tied Delos to the dock and introduced ourselves to our neighbors, we walked in bare feet up to the balcony and saw to our surprise a self-serviced fridge full of ice cold beer! For only $0.90 cents each!!! 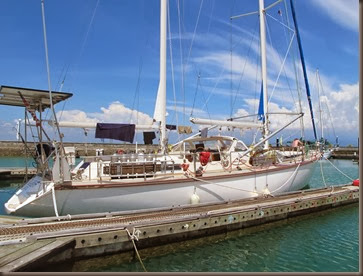 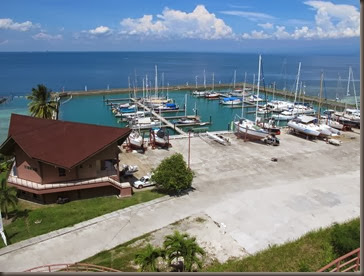 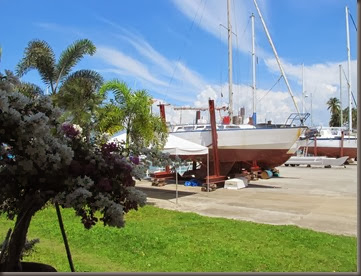 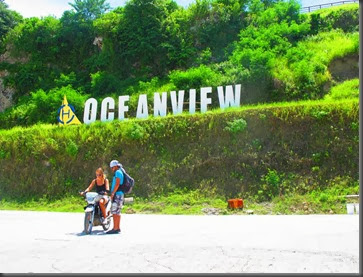 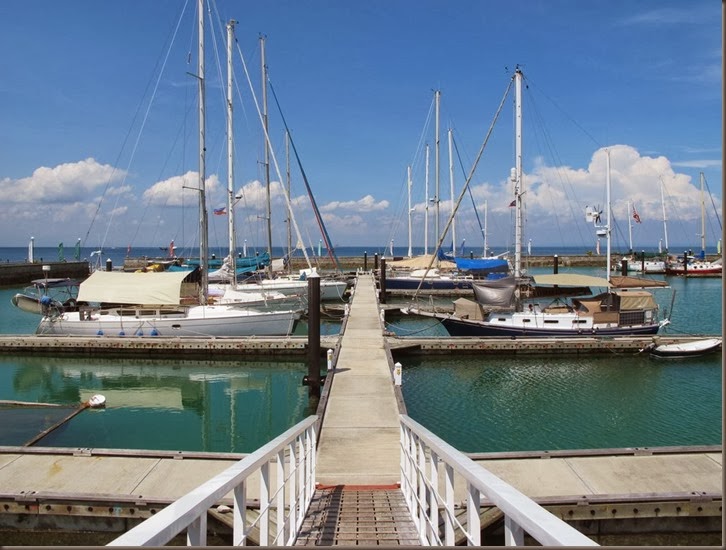