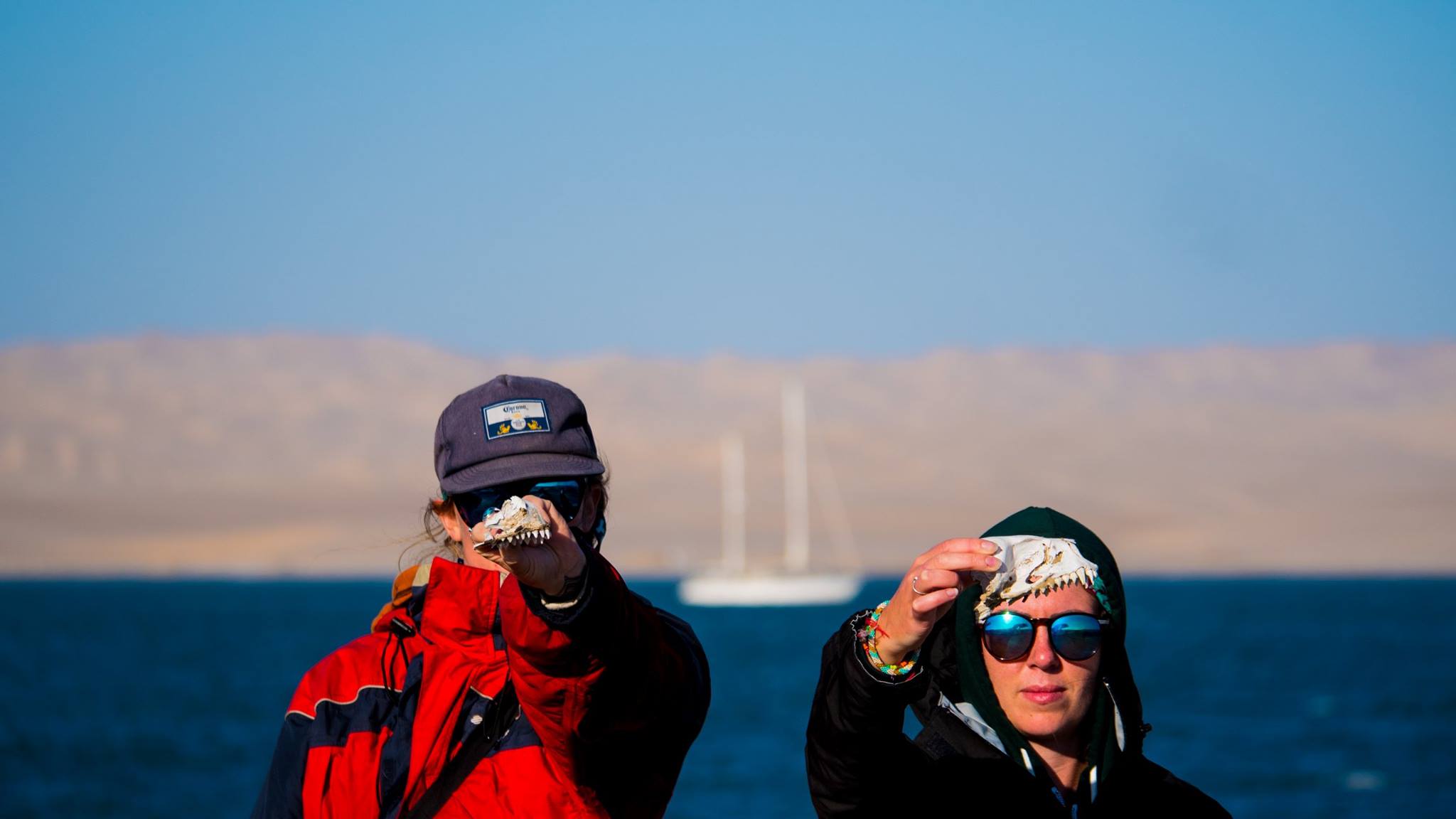 I look down at the thing that has just crunched beneath my feet and take a step back quickly.

“Bones…” I mutter in astonishment. The white skull beneath my foot stares back at me accusingly, the deep black holes where eyes once were sunk deeper into the sand beneath my footprint.

My eyes look further past the skull and I blink.

I turn around slowly, realising then that the white speckled things surrounding us weren’t shells.

We had just arrived in Spencer Bay after leaving Luderitz early that morning. I was glad to have such a short sail, just because the idea of visiting random places excited me- and to be honest, I wasn’t ready for Night Watch just yet…

The sail had been cushy, with us going from 3 hour watches to just an hour, which felt really good. We were getting more and more confident with Delos each day and I was looking forward to becoming a full-fledged sailor. We had spent the day cuddled up inside, the weather outside freezing and overcast.

“Hey Brady, can I draw you, mate?” I asked whilst he was snoozing on the couch.

“Yeah sure,” he mumbled, sitting up slightly. “How do you want me?”

I don’t know how it happened, but it went from that to Brady taking his shirt off and heralding his Titanic’s Kate Winslet.

“Is this how you draw all your French girls, Jack?” he asks me, pouting.

I don’t know if I even had a reply.

We wrapped up in everything we had before heading out in Maggie, the spray soaking Alex most of all. Water splashed against my sunglasses as I laughed against the waves, feeling a rise of euphoria. Heading out in Maggie is probably one of my favourite things. Because I’m unused to being in boats the most, I feel like I’m the one grinning like an idiot most of all, unable to keep my cool like the others.

But my heart is whooping, twirling and fist pumping into the air in excitement. “Shut up, brain!” it screams.

At last we neared the edge of the abandoned landscape and Brian cut off the engine.

We rolled up our leggings to our knees as we jumped into the freezing water and dragged her ashore. I winced as my feet crunched against the sand. Brady had just pulled a shard of glass from my foot the previous day and I was sure there was still some left.

I had been hobbling around, a small puncture in my heel that had already been inspected by Lisa the Austrian.

“There is nothing,” she said with a frown of concentration, a needle and tweezers in her hand. “I can’t see anything, Elizabeth.”

Biting down on a towel whilst Lisa pulled apart my heel so Brady could dig down, I swallowed back a small scream and a thousand curses as he peered inside the cut.

I squirmed and squealed as Brady investigated further.

“You’ve got a choice,” Brady said, sitting back and probably a bit deaf from my swearing. “We can leave it, put on some ointment and hope that it comes out on its own- or I just dig down deep. It’ll really hurt- but it’ll be out.”

I stared at him, my fist in my mouth as the needle shone in the sun. “Oh bloody hell…”

After a lot of howling, Brady got that god damn piece of glass out of my heel and I sighed in relief, promising to not dance barefoot again. Well, not that night anyway…

I flinched as a broken shell scratched against my cut and was jerked back into the present, my eyes dragging back up to beyond.

Ruins of buildings filled my view, crooked and twisted against the sky. A strange archway stood boldly against the horizon, beckoning me closer.

“Come if you dare,” it seemed to whisper.

I stepped over the scattered sun bleached bones of animals, their rib cages and spines arching from the ground in perfect formation, shadows twisting across the sand in grotesque echoes of death.

The crew swore and split up, keen to explore and startled at the sight around us.

“What happened here?” I asked Karin, not expecting an answer as I stared up at the archway, unable to lose it from my sight.

“I have no idea,” she said, lifting up a skull, her blonde braid swinging.

I have always been fascinated with creating fantastical surroundings where my main characters would end up. My mind would race to concoct different scenarios and views, always keen to create a new place for myself to be lost in.

But I could never have thought of anything like this.

The archway waited ahead and I stepped closer, feeling an overwhelming sense of desolation around me. There was no warmth in this place. No life.

I stepped closer, shells and bones crunching beneath my feet, my steps taking me closer to the building that had crumbled away ahead.

It reminded me of the old Greek structures that had eroded over time, pillars eroded by wind and sand.

But this was a different type of destruction. I couldn’t guess how old this place was. I wouldn’t have said more than fifty or sixty years. But it looked like a war had been ravaged on the stonework.

That’s the sea for you, I thought, my eyes glancing to the waves crashing against the rocks and shuddered.

This was not a place I would like to be alone in at night.

I don’t know why it was important for me to step under that god damn archway. Maybe because it frightened me. Maybe because I’m a sadist. Or maybe because in my mind it made a better story. To walk through a doorway that people before me once had, forgotten, haggard and wizened by the elements.

It seemed to have a spirit of its own, bitter and vengeful.

The rust wrapped around the black ironwork in bright orange patches, a mechanical plague, as I walked under.

The ocean has no mercy on man-made creations.

Only the creations of Neptune ruled here.

There’s something amazing about seeing something once ruled by man being taken over my nature. This was a land ruled by beast and wave now.

Humans have no place here.

I have no place here.

The only living souls we saw were the birds and a colony of seals sitting on a rock formation near another building. This structure looked reasonably used and maintained and I couldn’t imagine who could visit here on a regular basis.

Maybe I didn’t want to know.

We went from thinking people had deserted a town and left their pets to die to coming to the more sensible conclusion that they were the bones of dead seals, dragged and eaten by the jackals and hyenas in the area.

It was a less dramatic conclusion, but nevertheless still disturbing.

We continued to explore, take photographs and even found some old lobster pots. After spending a few hours walking across the dunes, I think we were all very happy to get back in Maggie and head towards the warmth of Delos.

We celebrated out first anchorage on our journey to Walvis Bay with a glass of red wine and a delicious meal cooked by Alex.

I was relaxed and content. But nevertheless, the writer in me couldn’t help but continually glance up the steps to the cockpit, waiting for something in the dark.

I thought of the black archway in the night and shivered.

Maybe I shouldn’t have walked under it after all.

You can read more from Elizabeth here! www.earlewrites.com