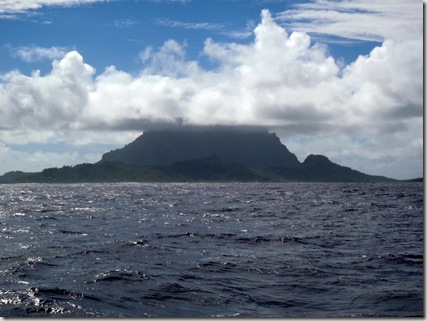 After our provisioning run we left Tahiti and headed out the pass, pointing the bow slightly to the east of Moorea.  We timed our departure to arrive in Huahine, about 100 miles away, for early the next morning.  As Tahiti faded into the dimming light we found ourselves in the channel we’ve come to know so well, this being our third crossing.

The breeze built as we were accustomed to and we were soon cruising along under reefed jib, main, and mizzen.  After rounding Moorea our course veered westerly and we settled in for our first overnight passage in a few weeks.  The seas and breeze continued to build into the 30 knot range and we reduced sail to just the double reefed jib while still maintaining 6 knots.  With Petter and Octavia on board we set up two watches.  Myself, Petter, and Octavia for the first watch with Erin and Brady on the second.  Our buddy boat Ghost was only a few miles behind us, taking it easy nursing their damaged rig.  We did our best to keep them updated on the conditions before they experienced them over the VHF.

That night it was exciting to say the least.  We were running dead downwind in some fairly large seas with gusts to 35 knots.  Delos was getting knocked around like a toy boat with confused seas hitting us on the stern quarter and occasionally the beam.  I’d have to say these were some of the roughest and uncomfortable seas we’ve seen since leaving Seattle almost 1 year and 9,000 miles ago.  I remember sleeping in our sea berth then hearing a roar and pounding on the hull, followed by what sounded like a river running along across the decks.  I bolted upright and through the companionway to the surprised looks of Erin and Brady who had just witnessed a larger than normal set.  One wave broke right on our stern flooding our entire aft deck and sending a cascade of sea water right into the cockpit, some 15 feet from the stern of the boat.  This was a first for us as normally our cockpit remains dry even in the worst conditions.  Delos shook it off and continued on her way.

Over the next few hours the conditions normalized and the sea grew smaller.   Shortly after dawn the outline of Huahine grew larger and we found ourselves skirting the reef protected lagoon making way toward the pass.  We hooked a large mahi mahi that Brady fought for 50 minutes before getting it to the back of the boat.  As I dug in the gaff and brought the fish on deck the large bull made one final life saving attempt with a major burst of energy that ended up throwing the gaff hook, breaking our 200 pound test steel leader swivel and jumping off the deck.  I ended up getting cut by the broken leader on my arm and side, then stepping on the gaff hook.  With my blood on the deck instead of the fishes we mourned our lost catch (and dinner).  At least we got the whole episode on video.  The photos below are sequential  frames from the video. 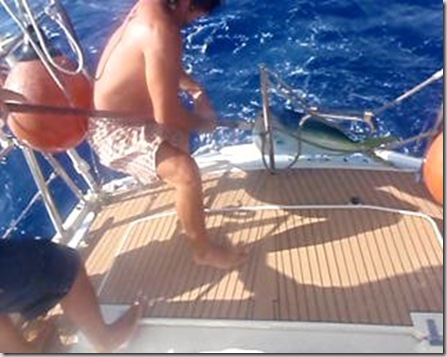 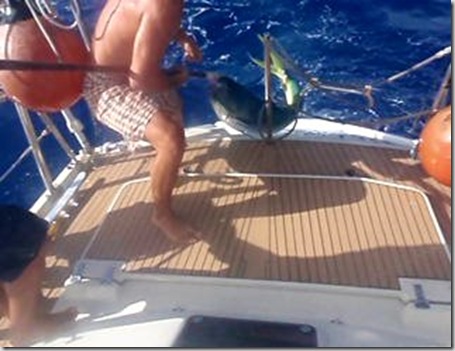 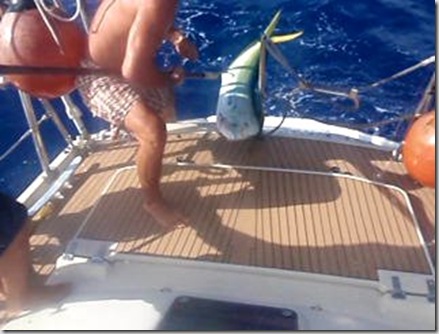 Anchored in Huahine we made plans to head to the beach to fly Ghost’s kites followed by some beach cricket.  Ghost improvised stubs and bats from dinghy oars and Delos improvised a beach stereo from a spotlight battery, spare inverter, and iHome speakers.  Team Delos made a good showing even though the game sounded a bit complicated at first, thanks to Brad and Kat’s expert tutelage. 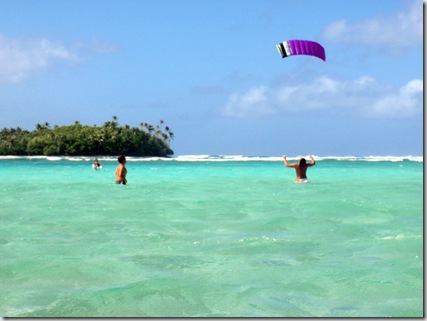 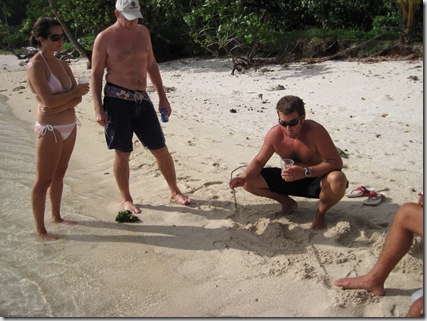 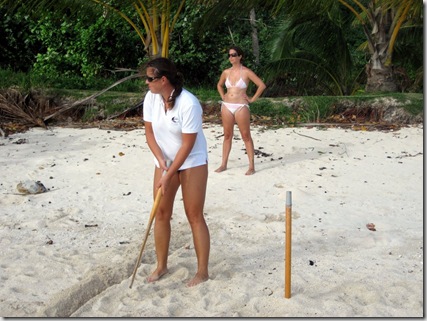 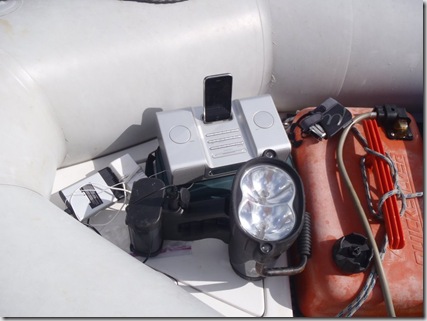 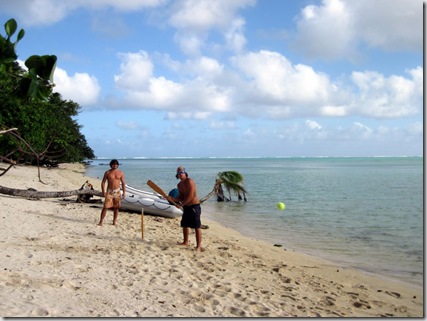 We arose early the next morning to view the solar eclipse, which was 98% at our current location.  We could have seen a full 100% had we still been in Tahiti and sailed another 40 miles south.  Although not completely dark at 98% it was still an incredible experience to be in a dinghy in a south pacific lagoon witnessing a solar eclipse. 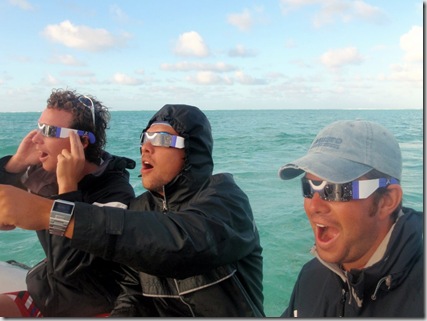 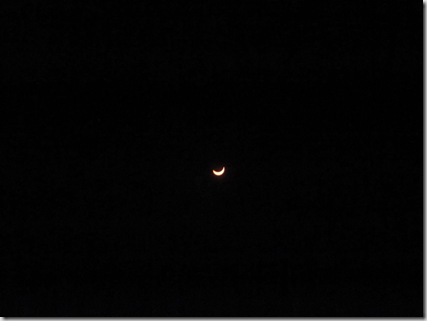 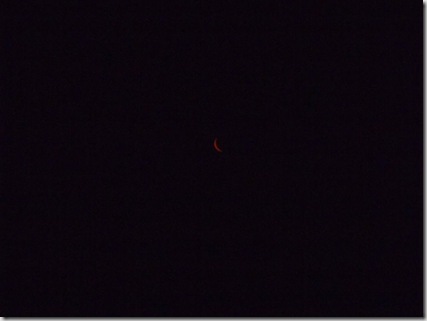 We left Huahine later that afternoon and sailed a short 20 miles to Raiatea, our last stop before Bora Bora.  We spent only one night in Raiatea but did manage to dive the wreck of a sailing vessel that ran aground in the early 1900’s.  The visibility was crappy and it took us two dives to locate the wreck in over 100 feet of water no more than 75 feet off the shore. 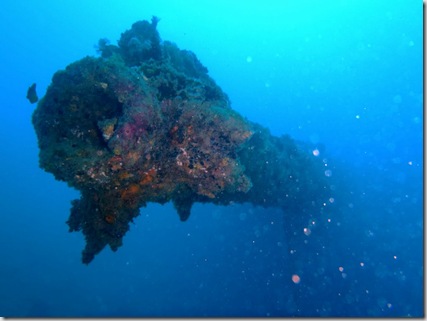 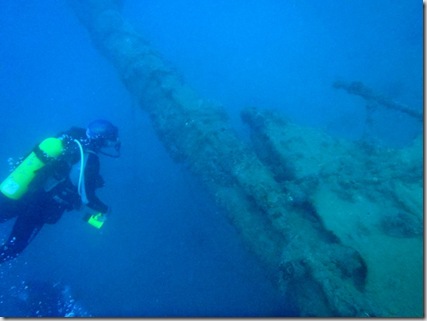 After our dive we sailed another 20 miles to our final destination in French Polynesia- the famous island of Bora Bora.  Ghost got some great pictures of the Delos crew at their finest, obviously showing our best side. 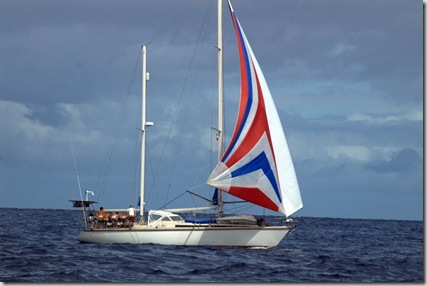 As the mountain peaks drew near we had our own photo shoot on Delos.  The anticipation of arriving in the world renowned lagoon was palpable as we drew near the reef and sailed along the leeward side of the island to reach the pass.  I remember watching Frasier years ago and seeing the episode where Frasier, Niles, and their ex-wives mistakenly vacation together on Bora Bora in one of the resorts that sit perched over the water.  At the time I had no idea where Bora Bora was, or how long the flight from the US may be.  The island just seemed very mysterious and exotic at the time.  It was a very poignant moment to realize that we’d sailed to this island on the western edge of French Polynesia, and now know exactly what it takes to get there. 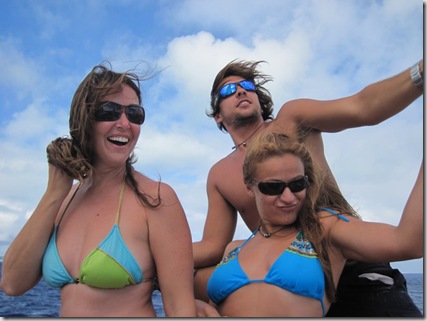 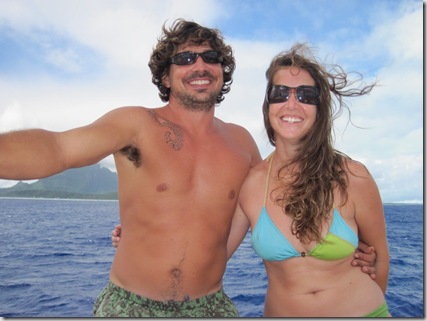