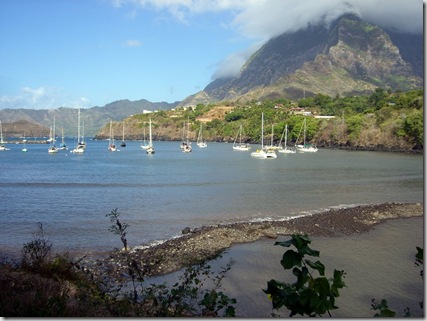 After spending a night in Baie Tahuku the Delos crew finally put their feet on terra firma for the first time in 25 days.  It was a wobbly walk as our brain told our legs to anticipate a roll of the ground that didn’t happen, making us feel like we just got off a long but mellow amusement park ride.

We decided to walk into Atuona, the only town on Hiva Oa to check into French Polynesia.  We hadn’t walked more than 200 feet down the road before a local Marquesan beeped his horn, pulled over, and waved us into his brand new Toyota 4×4.  It’s a common practice to give rides to anyone hoofing it down the street here.

We jumped into the truck and headed down the road soaking in the view as it sped by.  Trees, cliffs, flowers, fields, and beaches flew by as we hugged the road carved into the side of the mountain.  One of the things we all noticed was the tatoos on our new friend.  He had arm tatoos, shoulder tatoos, and calf tatoos.  In fact we have yet to see a Marquesan, even the women, without some sort of tatoo.  Here it’s part of the culture and very meaningful with every symbol carefully chosen.  We were dropped off in front of the Gendarmerie office and check in was a breeze taking only 5 minutes.  Way better than the 4 hours we spent in Mexico. 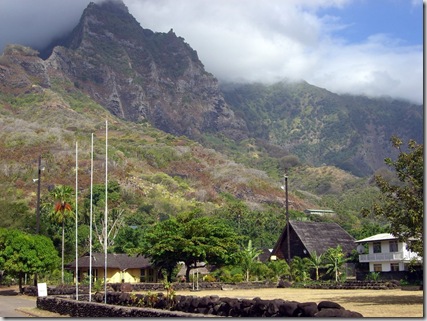 After checking in we stopped at Snack Make Make (pronounced Ma-Kay Ma-Kay) to get a cheeseburger and fries that we’d been craving for so long.  We also ordered three ice cold local brews and sat down to enjoy our lunch.  It wasn’t until we finished eating that we realized our internal clocks were still off and we weren’t eating lunch.  It was just before 9AM and everyone around us was sipping their espressos.  The proprietor didn’t even bat an eye though so it must be a common occurrence for weary sailors.  The cost was an eye opener- about 5,600 CFP which equals $63.00 US for a burger and beer each.  We thought things would be expensive but this really blew us away, especially after spending the last 6 months in Mexico.  I doubt we’ll be eating out very much here. 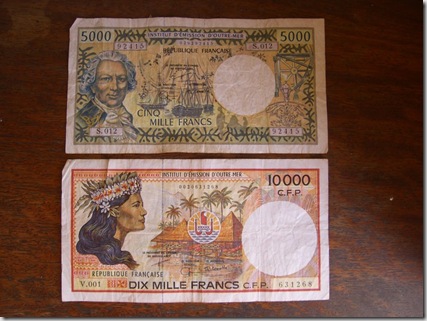 The day before yesterday we took a hike up a valley close to the anchorage.  The trail wound its way under a jungle canopy consisting of coconut, papaya, banana, mango, breadfruit, and several other fruit trees.  The canopy was so thick in places that the sun was darkened to twilight even though it was midday.  The silence of the jungle was occasionally broken by the loud crash of a coconut falling 100 feet to the jungle floor.  We’ve heard of people being seriously injured by an unfortunately targeted coconut and that more people are killed by falling coconuts than sharks.  I think the jury is still out on that one……  We were awe-struck at the abundance of fruit and flowers.  Every tree, branch, and vine had something beautiful to offer. After crossing through a few fresh water streams we arrived at some petroglyphs carved in a gigantic stone face by some long lost people.  We refreshed ourselves by eating fresh papaya and drinking the sweet nectar of the green coconut that we opened by bashing and cutting until we formed a drinking hole.  What a treat to take  a hike and have the land provide  you with food and drink. 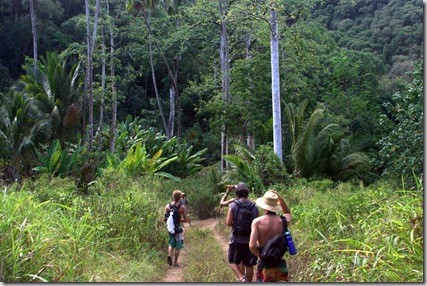 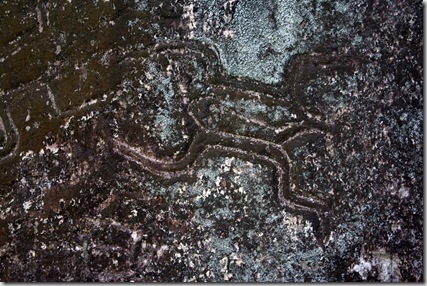 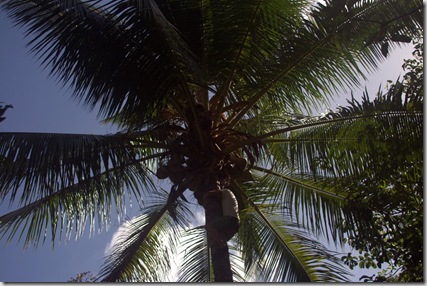 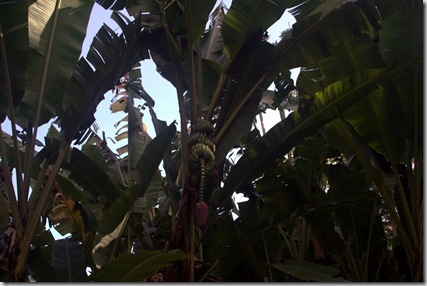 On the way down the valley we saw a huge plume of smoke billowing out of a valley on the other side of the mountain.  Occasionally we could see orange flames flare up as they hit some flammable object racing up the nearly vertical cliff sides.  At the road no one seemed alarmed or concerned.  There were no fire trucks or sirens, almost like fire in the mountains was a part of the natural cycle here.  Later that night there was a tropical downpour that took care of the flames.  In the morning there was barely a trace of smoke. 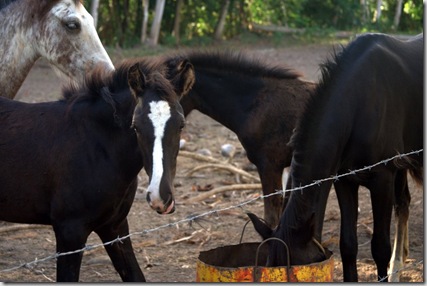 Yesterday we borrowed Capaz’s bikes and explored further down the road visiting the cemetery of Jacques Brel and Paul Gauguin.  It was awesome riding the road to the top of a steep valley before flying down the other side with the refreshing breeze cooling you down.  We bought some canned corned beef and more fishing supplies at the local store.

We’re leaving this morning to head to the north side of the island and a different anchorage that’s hopefully less crowded.  The trip is only 22 miles so should be short and quick. 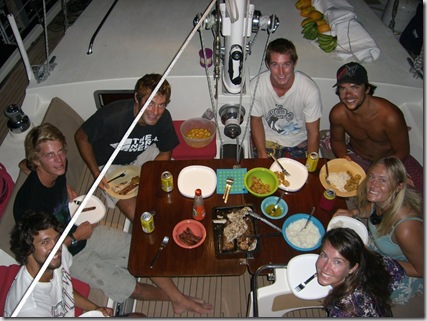 Dinner with Secret Agent Man and new friends from Mojombo