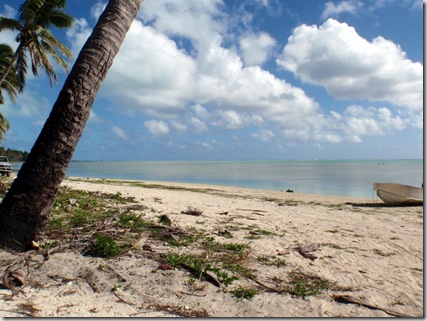 Seriously, I think they put something in the water here. After a week in Auitaki our faces ache from smiling, our voices are weak from saying hello to everyone passing by on a scooter. It doesn’t seem forced either- from the giggly girl at the tourist info office to the kind gentleman that rented us our scooters everybody seems truly content with their little slice of paradise.

A few nights ago we went to a local bar, the Fisherman’s Club, which is nothing more than a concrete slab with a roof and a few picnic tables. Drinks are served out of an old metal cargo container left long ago by the monthly supply ship, with a rectangular hole cut out of one side as the bar. It’s a very local scene and everything is $4 (New Zealand) whether it’s a beer, rum and coke, etc. These are by far the best drink prices we’ve seen in a long time. In French Polynesia it was 2-3 times as expensive. 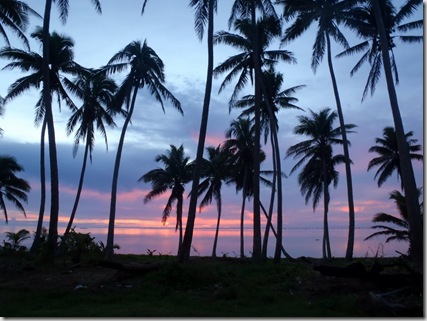 After last call we were invited to watch the New Zealand vs. Australia rugby match at another local bar that was staying open late especially for the midnight start. No doubt rugby lovers would be flocking there in their jerseys from NRL shop, or sporting the colors of their chosen team. Our new friend Tony offered us a ride to the other end of the island on his 4-wheel ATV, a dual purpose vehicle he used for his landscaping job at a resort and commuting around the island. We piled 6 people on the ATV- two on the front rack, two on the seat, and two on the rear rack. Another two jumped on a scooter. Not to worry Tony said, we just had to make it to his work where he had a trailer that would easily accommodate us all. Tony wasted no time shouting “Anyone want a roadie???” He didn’t wait for our answer before he was elbow deep in his rack cooler handing out cold beers to everyone. Tony was our new hero. Who else would keep a cooler full of cold beer on his ATV. When in Rome right? 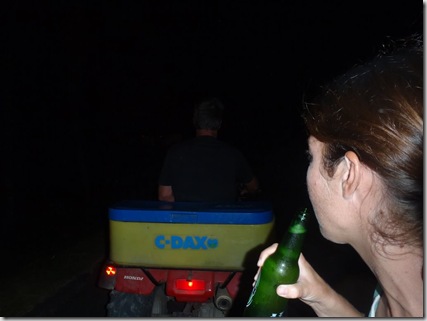 Heavily loaded down and with beers in hand the ATV crept along the paved road of the town’s main street that also circled the island- right past a cop parked on the side of the road. Cops are kind of hard to recognize here. His truck had no lights, no sirens, one working head light, one working tail light, and only a partial homemade police sign on the drivers door. He pulled us over by sticking his head out the window and yelling while waving his arms. The cop greeted Tony by name (small town style) and asked why he had so many people piled on his ATV. Tony simply replied that we were heading to The Boat Shed to watch the rugby match. The cop shrugged and said it wasn’t safe to have 6 people on an ATV. We could easily fall off and hurt ourselves making us easy targets for the scooters racing back and forth through the night. Before we even had time to ponder our fate he motioned to the back of his truck and told us to jump in, imagine a pickup truck with a flatbed and canopy such as you’d be able to see if you Click here as an example. He’d give us a ride that was much safer. No mention of open beers and being on the road.

We zoomed off again with me in the cab and everyone else in the pickup bed. He had a 3 year old in a car seat in the passenger side, who’s parents had gotten in a drunken domestic dispute. He was taking the toddler to his grandparents house down the road. I suppose domestic disturbances happen even in small island communities. I learned there are just over 2,000 people on the island, only two police, and no jail. The police take Saturday and Sunday off (weekend crowds at the bars fully reflect this) and aside from the occasional domestic dispute nothing serious ever happens. He said no jail was necessary, the people would take care of any would be inmates should the need arise.

When I asked directly about the drinking and driving laws here he said that people shouldn’t drink and drive, or drive and drink but didn’t say whether there was any legal limit or punishment. He said because there were very few cars not many accidents ever happened. If someone was dumb enough to have too much to drink and then try to drive they’d probably end up wrecking their scooter but he thought this had only happened twice. The fastest anyone ever goes is 20-25 MPH. He said he’d been a cop all over the Cook Islands and he was basically bored to death. The cop dropped us off at Tony’s work then zoomed off in a cloud of dust. We carried on in the obviously much safer landscaping trailer towed behind Tony’s ATV. 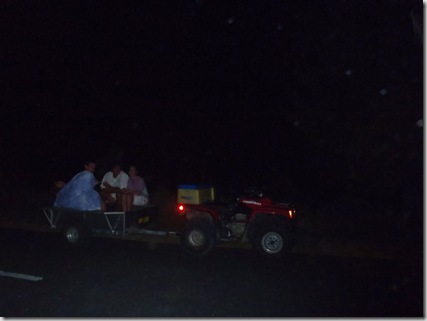 Tourism in Auitaki is sharply down since the cyclone hit last February and hasn’t come back yet. One of the only two airlines servicing the island are no longer around and the resorts have a very empty feel. The remaining flights into and out of Auitaki go through Rarotonga. There are no options. There is a strong religious sentiment against flights on Sunday, hence the signs. 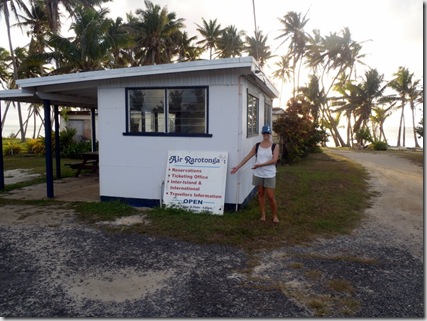 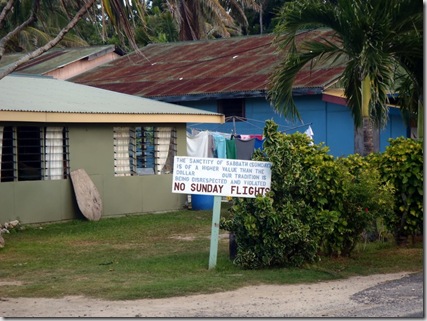 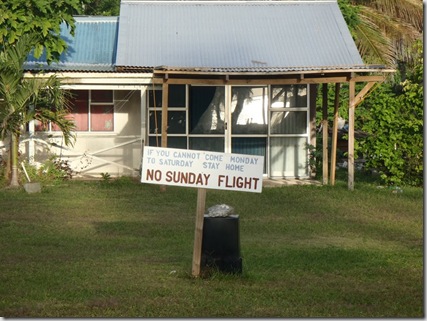 No matter where we went people knew we were from a yacht that arrived a few days ago, and that we were anchored outside the lagoon because our 6’7″ keel is too deep for the 5′ deep channel. Everyone profusely apologized for this, saying that this season the channel was going to be dredged so larger boats could come into the calm and protected lagoon waters. We heard these plans had been in progress since the mid 1980’s. Island time…….. Below is a picture of Delos outside the protective reef in calm conditions. 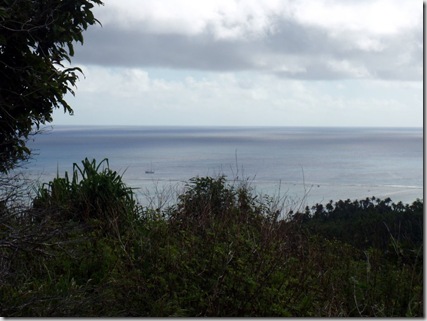 As a front from the South Pacific Convergence Zone moved in the weather deteriorated rapidly. We’d been watching the weather sources for days now in anticipation of what the front might bring. Since we were basically anchored in the ocean outside the reef any inclement weather was a major concern. For 3 days the wind howled, reaching 35 knots (40 MPH) at times. The seas were large, confused, and rocking us uncomfortably. The rain kept us pinned inside and the lightening was scary close. We watched movies to keep us entertained and ran the AC to keep the humidity at bay. Thank goodness for our awesome generator or we would have surely lost our sanity. At even the slightest hint of a westerly wind we’d need to pick up our anchor and head to sea, otherwise we’d risk being blown onto the unforgiving reef.

The winds clocked from south to east to north then back, luckily never heading westerly at all. The weather finally cleared and the boat dried off. Our only damage was a chafed stern anchor line from an unexpected wind shift and serious lack of sleep from anchor watches during the night. When we got back into town people recognized us and asked how we were, asking if the lightning was as scary on a boat as on land. Apparently they were watching us rocking and rolling from shore. It was nice to know they were thinking of us.

Later on at the Fisherman’s Club the Customs and Immigration Officer (the only one) wished us well on our travels and asked if we were still leaving next week. We’ checked out on Friday just in case we needed to leave unexpectedly during the storm over the weekend. With a cheers and clink of his beer he welcomed us back anytime, and said we were welcome to stay for as long as we wanted.

We spent our remaining time on Auitaki exploring the island by land and sea. We had dinner with other cruiser friends from Fidelis and Julini at a local character’s house named Richard. He’d married a local women and never left. That was back in the 1960’s. At his neighbor’s house we had a chance to get close and personal with some baby goats and pigs. Nearly every house on the island has them tied up in their yard. 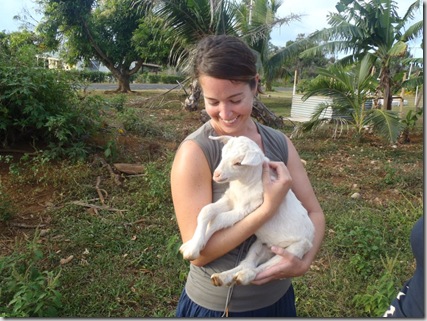 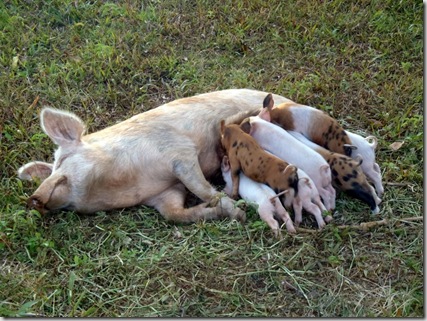 We rented scooters for $20 NZ a day (They were $60 US in French Polynesia) and explored the back roads of the island, including the highest point on the island that provided a great viewpoint. At one point the road actually went straight through a gigantic banyan tree. 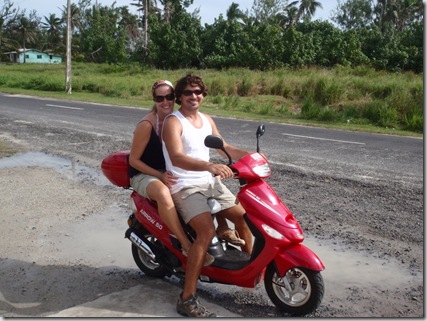 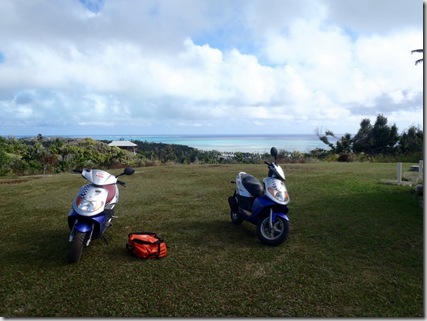 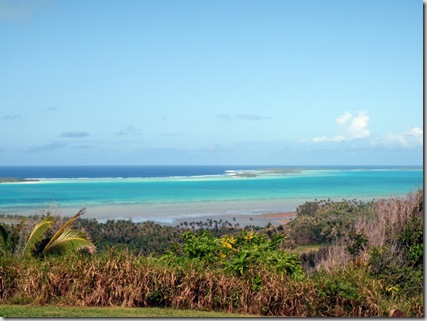 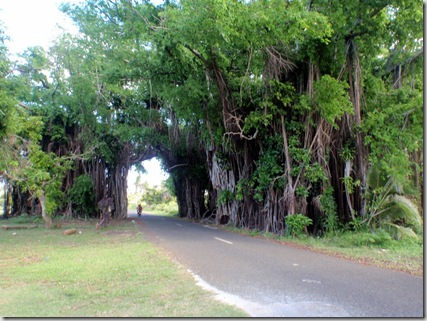 At night by the airport was saw a plane take off. With only a few flights per weak they save electricity by only illuminating the runway when in action. The rear wheels were barely off the runway when the lights snapped off again. The next day we visited the empty airport and found the light controls simply bolted to the outside wall of the building, no lock or protection of any kind. Obviously no need for Homeland Security measures here. We were there on a weekday in the early afternoon and it was totally deserted of passengers and employees. 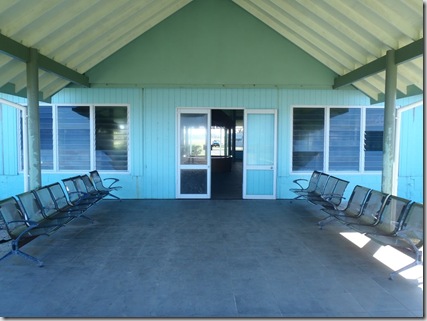 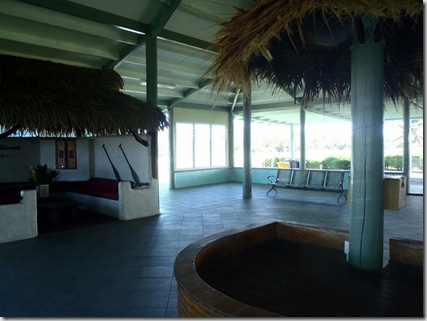 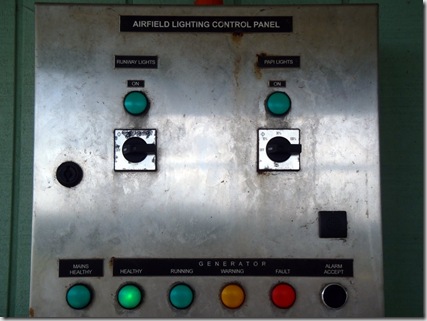 We did quite a lot of diving on our stay. Not realizing it at the time we anchored very close to the edge of the reef, so while we dropped our hook in 45 feet Delos floated right on the edge of a 200 ft coral drop off. This made for incredible wall diving right from the boat. In fact the mooring for a local dive company was only a few hundred feet away. We could here their bubbles hitting the bottom of Delos as they explored the drop off below. Our stern anchor happened to grab onto a piece of coral right on the edge of the drop off. It finally set on the third try. 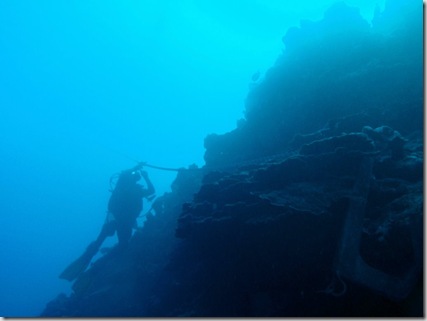 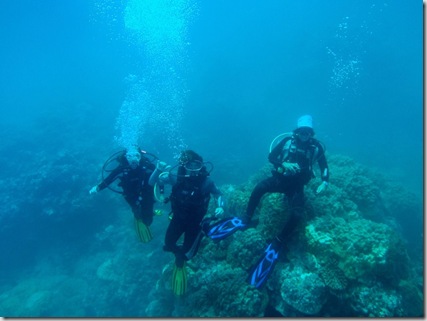 A spectacular swim through cavern just a few hundred feet from Delos at about 75 feet of depth. 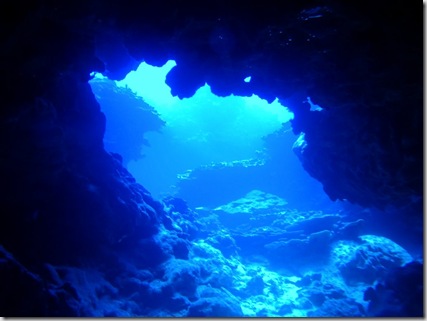 We caught some Crown of Thorns starfish in the act- one of the major culprits blamed for the dead coral we’ve seen so far. Apparently they have no natural predators and are capable of destroying (eating) 1 square meter of coral per day. We saw dozens and dozens on every dive. The shot below shows the before and after effects of one of these guys. The white is eaten, dead coral and the live colored coral is about to be devoured. They are really beautiful up close though. 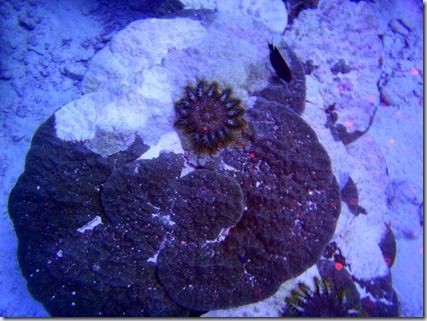 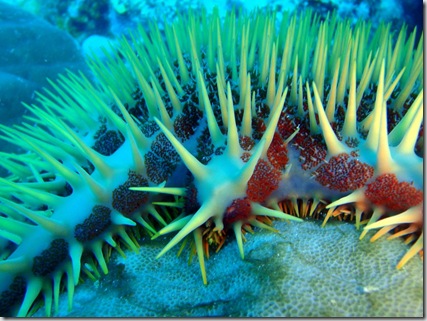 When word got out that our next stop was Palmerston Atoll we were hailed on the radio by Neil, one of the dive operators here. His wife still has family on the remote island and since they hadn’t seen a supply ship in over 5 months they were in desperate need of some groceries. He asked if we were willing to play cargo ship for the 200 NM passage. We filled our port cockpit locker with 250 lbs of flour, sugar, rice, salt, and a few other important goodies like tomatoes and biscuits (cookies). We’re excited to see what Palmerston is all about and meet the interesting group that are all descendants of William Marsters and his 3 Polynesian wives from the late 1800’s. 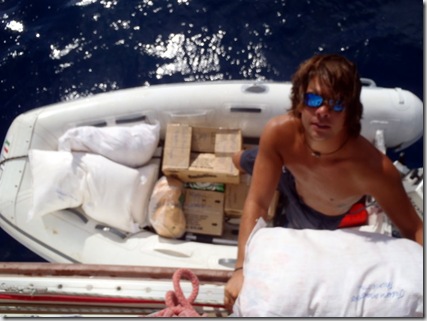