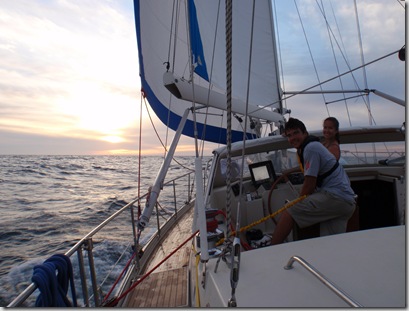 After our relaxing Christmas Vacation in Paradise village we cast off the dock lines and headed back to the anchorage at La Cruz. While performing routine maintenance at the dock I noticed the propeller gearbox oil overflow was a milky white color, a sure sign that water had gotten into the gearbox and contaminated the oil.  After some research on the Amel forum we determined the seals and bushing on the propeller shaft needed to be replaced, something that can’t be done in the water.  The shipyard was accommodating and scheduled our haul out for 9AM the next morning.

This is one of those unforeseeable things that happens while out cruising.  Luckily we found the problem where there was a suitable Travelift rather than further south.  The yard was clean and professional and allowed us to do the work ourselves  while 20 tons of Delos hung over our heads.  We were out of the water first thing in the morning and worked through the day replacing the seals and bushings.  We also took advantage of the unplanned haul out to clean the hull and replace zincs.  While inspecting the bow thruster we noticed that the prop was missing a blade.  Our best guess is this happened in California but we didn’t notice because we’re not in marina’s very often and don’t use the thruster alot.  We replaced it with a new one from the stash of spares I ordered before leaving Seattle.  We celebrated our super productive day by joining friends at the La Cruz marina for the birthday celebration of Behan on Totem. 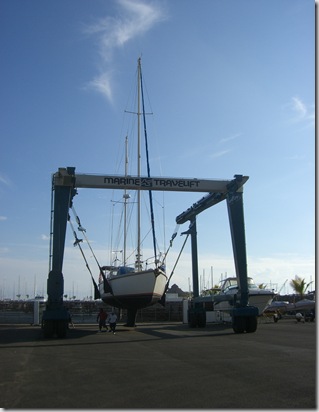 The Travelift hauling Delos out. 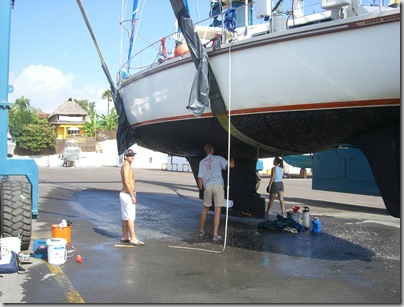 Brad from Capaz dropped by to help out. 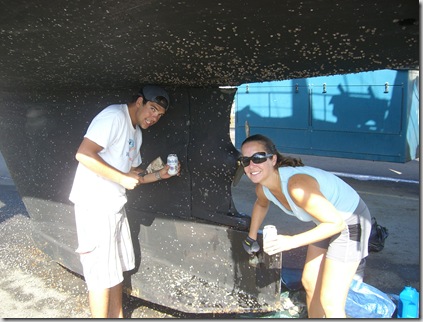 It’s hard work but someone has to do it.

We finally left Bahia Banderas in the early afternoon and set a course for Tenacatita, a trip of about 140 NM from La Cruz.  We left the bay on a nice reach making good speed in 15 knots of breeze.  After rounding Cabo Corrientes we headed south running dead down wind and were able to set both headsails for an easy 8-9 knots through the water.  About 2 hours into the sail the breeze continued to build to a solid 20 with gusts to 25.  We decided to drop the forward ballooner and run under the poled out jib alone still maintaining 8 knots.  Shortly we had a bite on one of the hand lines and pulled in a Skipjack that we feasted on for dinner. 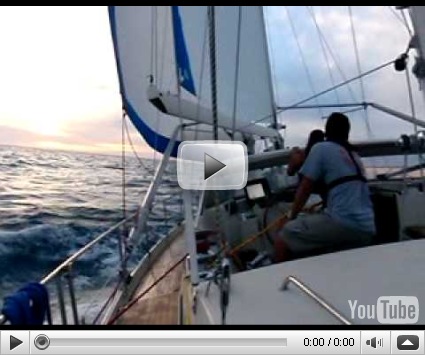 Delos sailing out of Bahia Banderas.

As darkness settled in the seas and breeze continued to build into sustained 30 knots with gusts to 35.  We congratulated ourselves for already reducing sail and settled in for an exhilarating downwind ride.  Delos continues to impress us with her ability to track through rough seas.  With the autopilot and sails dialed in it feels like a freight train on rails rumbling through the night, climbing and descending the mountains of water one after another.  With waves breaking around us we regularly surfed at 10 knots.  At about 10:00PM a particularly large set rolled through.  We felt a huge acceleration followed by spray coming over the bow and landing in the cockpit, something that was out of the ordinary as our cockpit is normally always dry.  I looked up at the GPS and saw a speed of 14.2 knots- a new speed record for us.  We had already started to decelerate so we’re not sure what the actual top speed on that one was.  I’d venture a guess at 14.5.  The energy required to move 40,000 pounds like that, provided only by the wind and sea, is mind boggling.

The overnight passage was a great, but intense, introduction to offshore sailing for Brady who stood the 11-2AM and 5-8AM watches with Erin.  As the wind slackened in the morning we hoisted all sails to continue moving before it finally dropped to 5 knots and we were forced to motor sail the last few hours into Tenacatita. 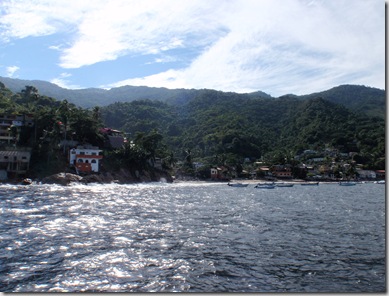 The village of Yelapa as we sailed by. 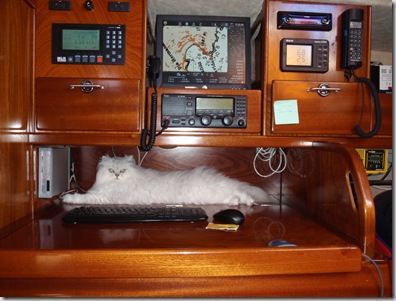 Mishka relaxing after the overnight passage.